November is always a peculiar month for me. In Canada, there are no holidays this month to speak of, aside from Remembrance Day on November 11th, which is somewhat dour and mournful. All of the leaves on the trees have fallen, leaving bare skeleton branches silhouetted against a perpetually grey sky, which has not yet produced any real amount of snow to make the landscape look at least a little more cheery. It's cold. It's damp. It's ugly. For these reasons, I turn to books and magazines more frequently for inspiration and joy. Now begins the season of fervent page turning as I look for new ideas, new inspirations, new projects and new recipes to try in the kitchen. The November issue of Martha Stewart Living, which is on newsstands now, has always been one of my favourite issues of the year. Even though Canadians have long since enjoyed our Thanksgiving meals (October 12th) I still look forward to seeing the pies, the side dishes, the homey/cozy interiors and the fall craft projects that the editors compile for this issue. 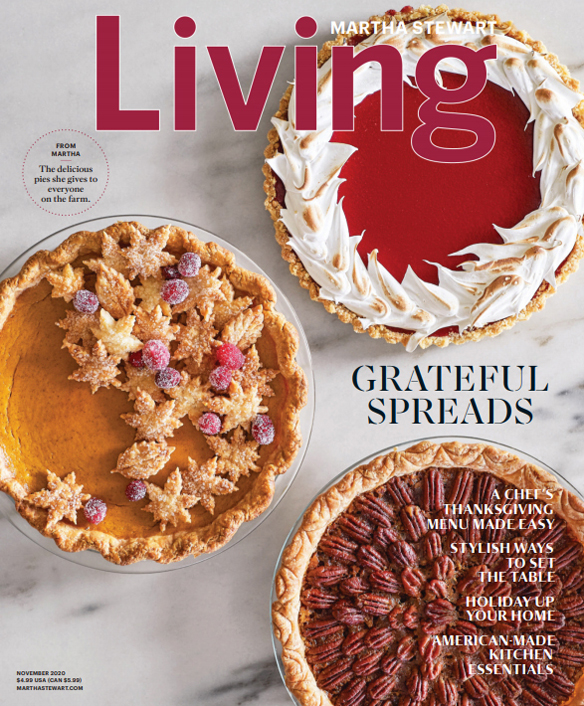 The cover is a bright collection of Thanksgiving pies baked by Martha for her annual Thanksgiving dinner; she actually makes dozens of pies to give to her staff at the farm - lucky recipients! Inside, there are all sorts of ideas and Good Things for the American Thanksgiving holiday, from tinting cloth napkins to ways to use wheat in decorative craft projects for the holiday table. There are tips on how to use up those leftovers in soups and stews, as well as ways to stock your kitchen with American-made goods and utensils. I loved the article by Elyse Moody about how to refresh your home for fall, or as she writes, "simple ways to dust off the last several months." The ideas are simple to achieve but effective antidotes to what has been a challenging year spent largely indoors. 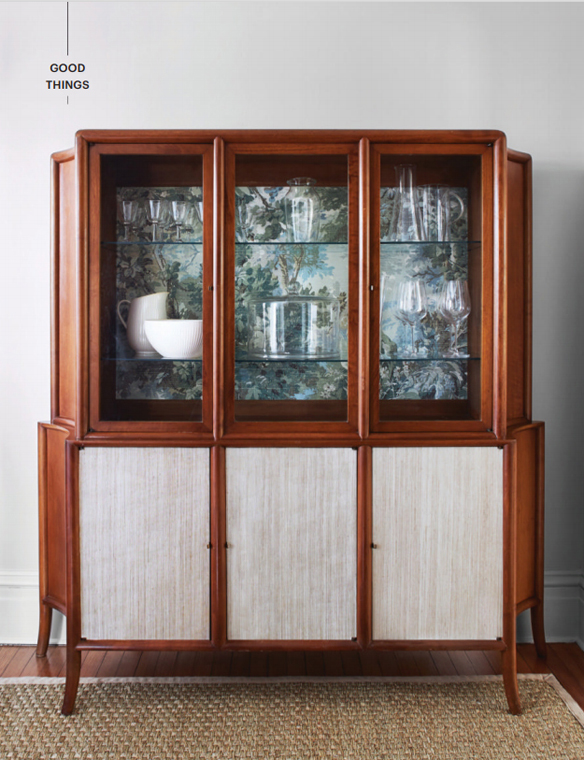 My favourite Good Thing from this issue is the reworking of this mid-century modern hutch by home editor Lorna Aragon. New seagrass-covered doors add a lightness and the wallpaper backing behind the shelves brings it all to life. I could actually stare at this image for hours! It's so me! 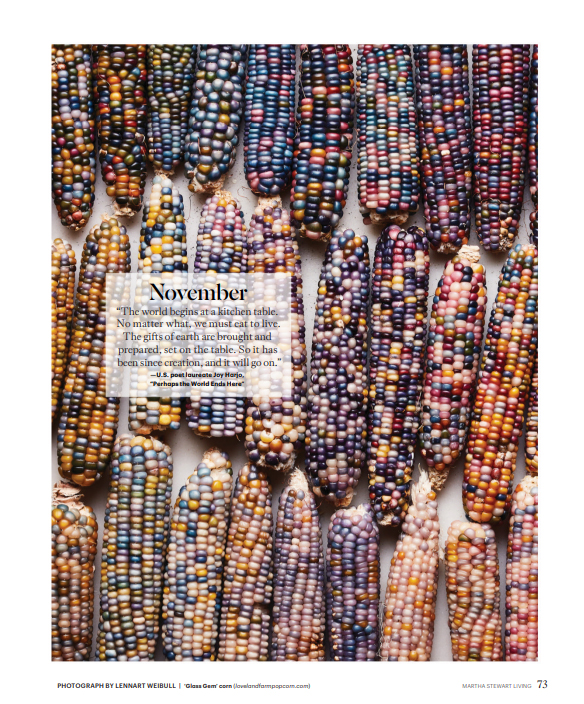 Every month this year I have looked forward to the enlightening quote found on the splash page that introduces the well of the magazine. This month was no exception. It was written by U.S. poet laureate Joy Harjo in Perhaps the World Ends Here. She writes, " The world begins at a kitchen table. No matter what, we must eat to live. The gifts of the earth are brought and prepared, set on the table. So it has been since creation and it will go on." Indeed. It made me think, too, of giving back to the earth and of expressing not just gratitude but generosity in return: planting a tree, a garden, choosing craftsmanship over convenience. Let's give not only thanks this season; let's actually give back. The well opens beautifully with a story about UK-born chef Clare de Boer, who now lives with her family in upstate New York. The setting is gorgeously captured by photographers Paola + Murray and the feast prepared is enticing with a menu that takes the classics to new heights with myriad ingredients and cooking techniques. 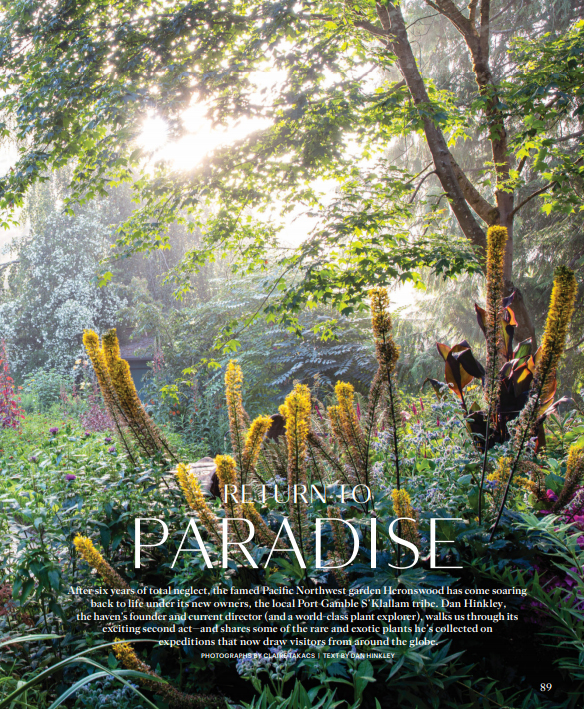 I was pleased to see the article about Dan Hinkley's nursery, Heronswood in  Kingston,Washington. I had written last month about his new book Windcliff, which is a personal journey through the development of his private home garden. The book features the photographs of Claire Takacs, as does this article. Here, the founder tells us of how the nursery has come back to life under the guidance of the local Port Gamble S'Klallam tribe after years of neglect following its abandonment by its previous corporate owners. Hinkley is now back as the nursery's director and the showcase of plants and trees on display is nothing short of breathtaking. 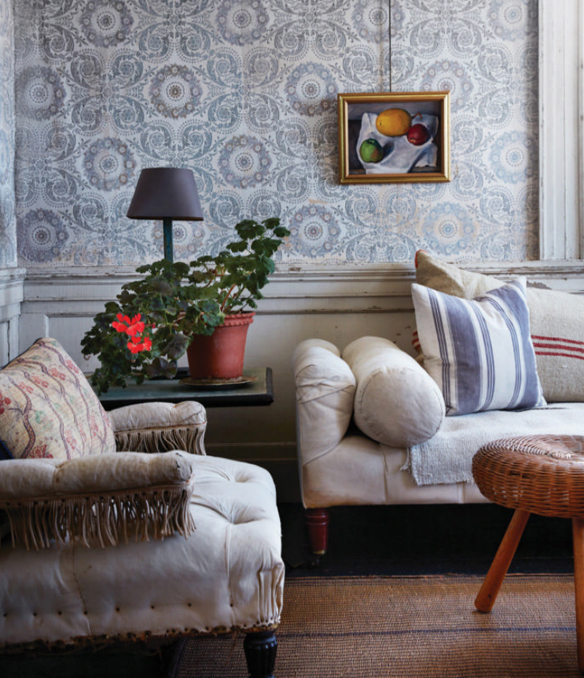 I was really pleased to see the home of New York designer John Derian featured in the pages of Living. He's always been an inspiration to me. I became aware of him while working at Anthropologie. One of our home merchandising concepts was based on his aesthetic and I immediately fell in love with his appreciation of whimsy, wit and balance in interior spaces. The photographs by Stephen Kent Johnson are beautifully moody and capture the ethos of his style perfectly. 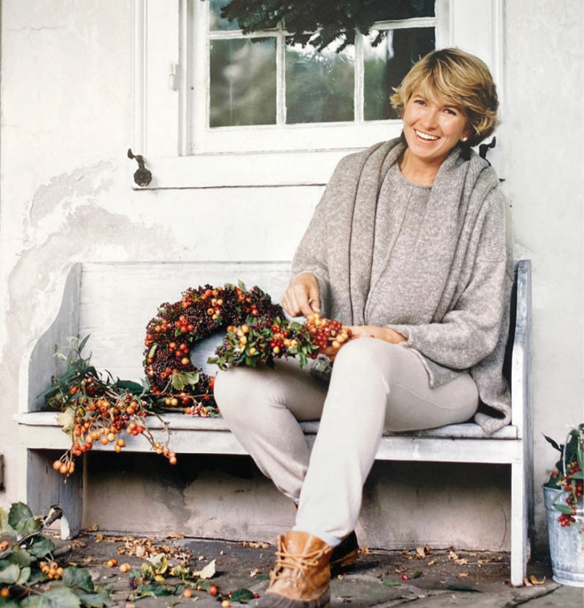 On the last page of the issue, which has been devoted to brief remembrances by Martha with a 'throwback' photo of the founder, this beautiful image by Stewart Ferebee brought back some fond memories of discovering Living at the newsstand in the mid-1990s, of watching her on television for the first time, of ordering a similar-looking berry wreath from Martha by Mail for my mother's front door and, of course, seeing that smile in person, face to face, for the first time in 2006 at the Good Things Event in New York City. Thank you, Martha, for creating this magazine.
NOVEMBER ISSUE HIGHLIGHTS:
Favourite Good Thing: Scene Change (see above)
Favourite Recipe: Brown-Butter Bourbon Pecan Pie
Favourite Find: Penn/Fairmount glassware based in Pittsburgh
Favourite Feature: "The Big Picture" (John Derian) by Catherine Hong and Stephen Kent Johnson
Posted by ANDREW RITCHIE at 9:28 AM

AR a Canadian treasure has left the face of the Earth, those that mourn the loss of Alex Trebek are numerous and I say count me in as I take a deep breath and reflect. As Martha, Mr Trebek touched the lives of many. My daughter tried out for College Jeopardy--
we drove to New Orleans for the tryouts. AR a visit to New Orleans may be something you would consider. granted I did not see the entire city but gee whiz the history, the cable cars, the casino, the street life--- just do your homework and make the most of your time remember the coffee is strong at the cafe du monde, the doughnuts are too hot to touch LOL

Alex was from my hometown: Ottawa, Ontario. He was very philanthropic to local charities, schools and universities here. A sad loss, to be sure. I would love to go to New Orleans some day! I think the history is fascinating. There are also Canadian ties: the Acadians (French settlers in Canada) were deported from maritime Canada by the British and sent to a colony in New Orleans, hence the French influence of the city.