Homeowners Tim Obert and Matt Obey love Halloween. I mean they really, really, really love Halloween. Maybe it's because they live in historic Salem, Massachusetts, site of the infamous witch trials of 1692, or maybe it's that Matt's enthusiasm for All Hallow's Eve has only deepened since he was a child. Whatever the reason, you can bet that if you're traveling down Federal Street during the last week of October you'll see their home from quite a distance away. Illuminated in a ghastly shade of acid green with giant skeletons and tombstones, the house is a beacon for all Halloween aficionados. And it doesn't end at the front stoop. Windows shine with eerie purple and blue light. Inside the front rooms a family of glowing skeletons appear to be dining on something sinister while a giant iron cauldron overflows with smoke, nestled into the gaping fireplace. 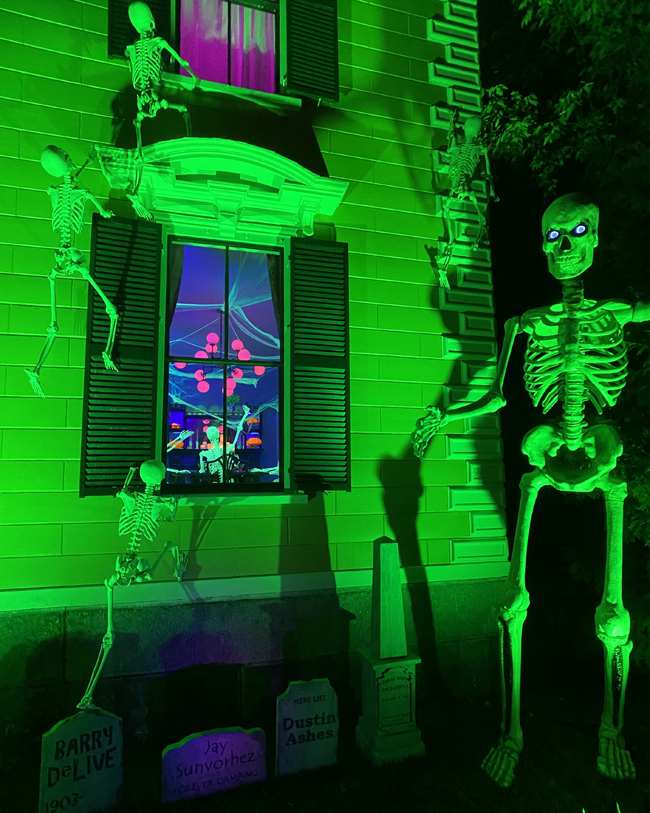 Since purchasing their historic home five years ago, Tim and Matt have fully restored it. The original wooden sash windows, the wrought-iron fence and all the original stained glass entrance doors were fully restored and reconstructed. A brick walkway and driveway were reinstalled and the arched second-floor windows, previously hidden behind rectangular storm windows, were exposed. "When we bought our house, it was in pretty rough shape on the exterior and had a haunted house vibe year round," Tim laughs. "So we decided to go with it, and make Halloween our holiday." 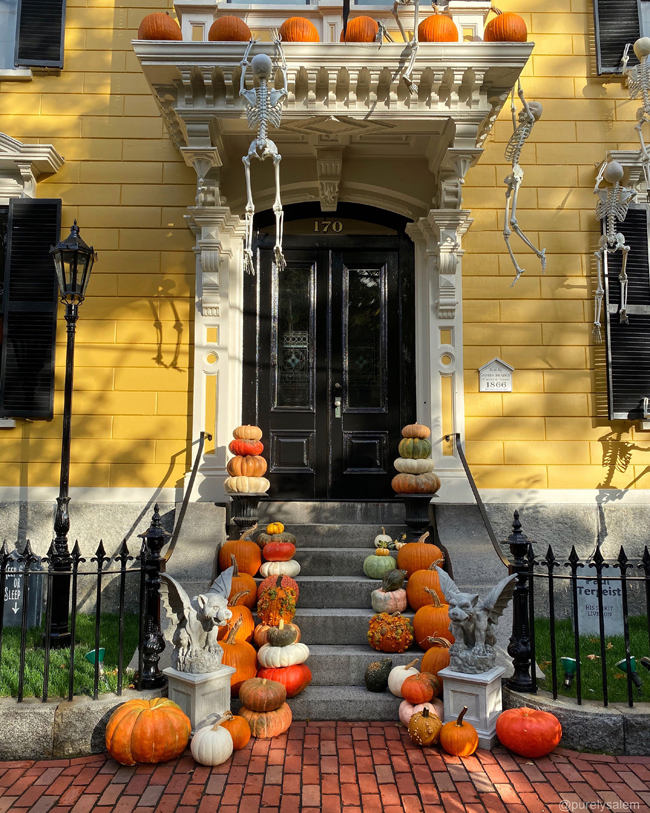 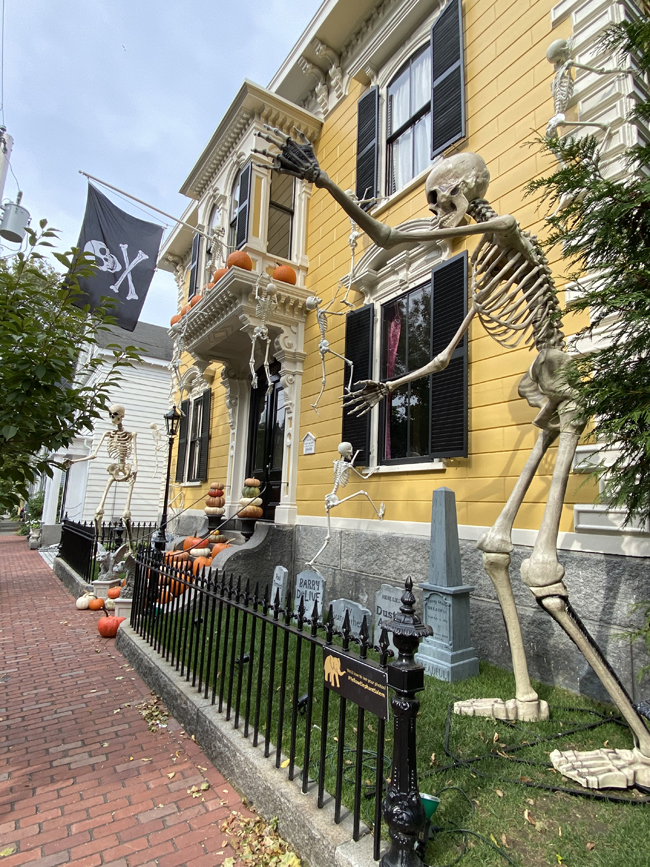 The couple admits they adore all holiday decorating but Halloween really inspires their creative spirits: "Halloween decorations are so much fun," says Tim. "And it's far less 'serious' than other holidays."

The decorations go up weeks in advance of Halloween. This year, because the home was featured as part of a virtual Halloween house tour sponsored by Historic Salem at halloweeninsalem.org Tim put the decorations up more than a month in advance: "It might have been a bit early for our neighbors," Tim jokes.

Tim says the exterior decorations can be set up in an afternoon, after a bit of planning and forethought. But it is inside the front rooms (the foyer, formal parlor and formal dining room) which Matt has designated as haunted reception rooms that open to trick-or-treaters and visitors on Halloween that get the most attention. And even though these rooms won't be getting any visitors this year, due to COVID-19, Tim and Matt didn't let that stop them from decorating. (Tim did promise me that visiting ghouls would still receive candy this year via a nifty candy chute that will propel goodies into their pales from a responsible distance). 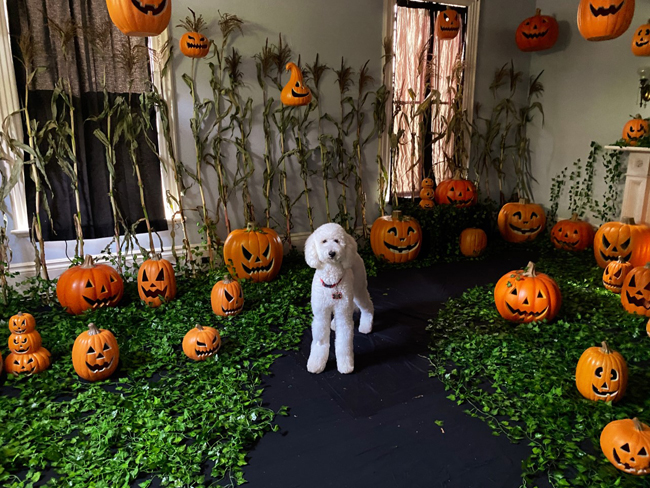 After Tim sets everything up Derby surveys the scene. 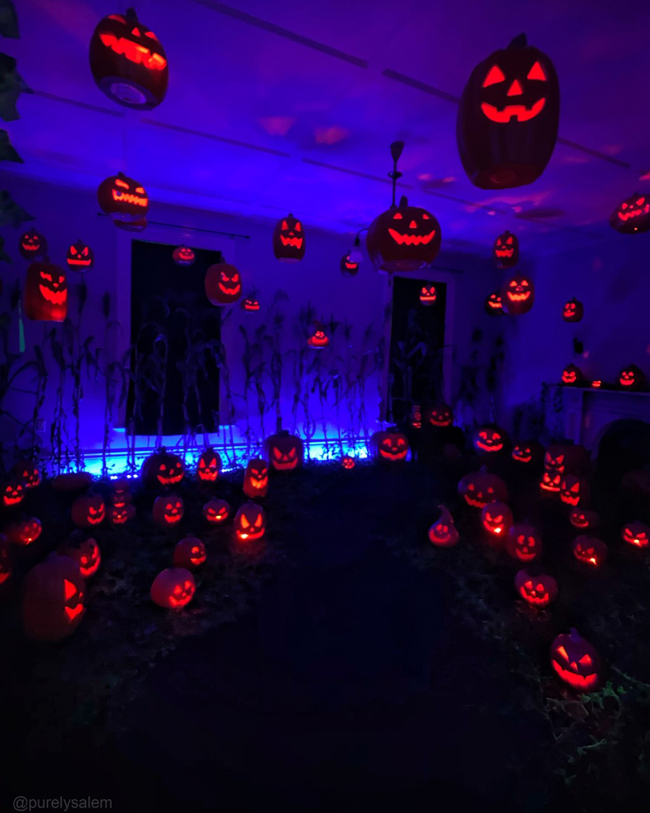 In the parlor, all furniture is moved out and the floors are covered with a black lining to create the pumpkin patch, which is then laden with vines, corn stalks and dozens of jack-o-lanterns, some suspended from the ceiling. This can take a couple of days to get it just right. In the dining room, a real cast-iron cauldron is set into the fireplace and skeletons take their seats at the table, about to feast on Tim's collection of orange Spode Tradewinds plates, which he acquired in Westport, Connecticut. The cabinet is filled with his uranium glass collection, which naturally fluoresces under black light, and gauzy cobwebs are stretched from the chandelier. 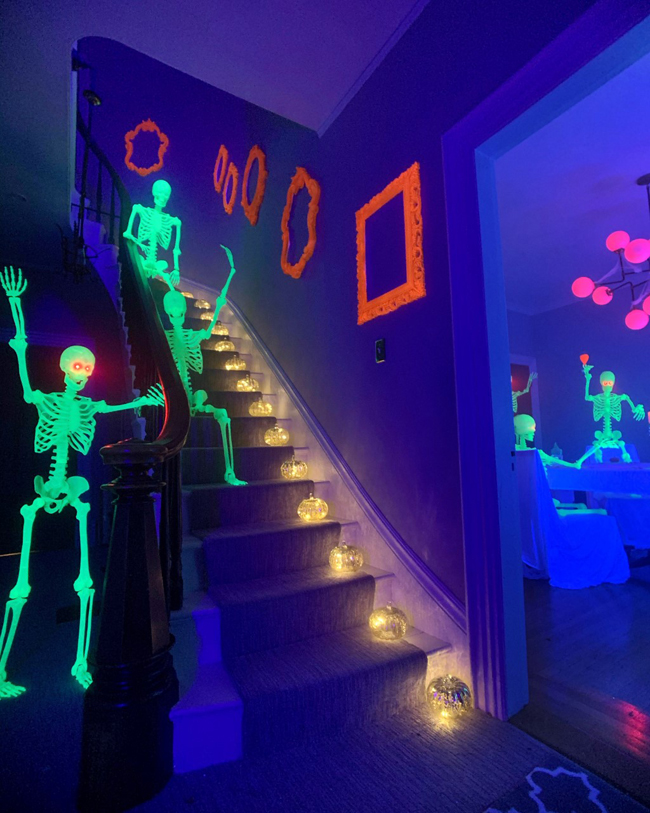 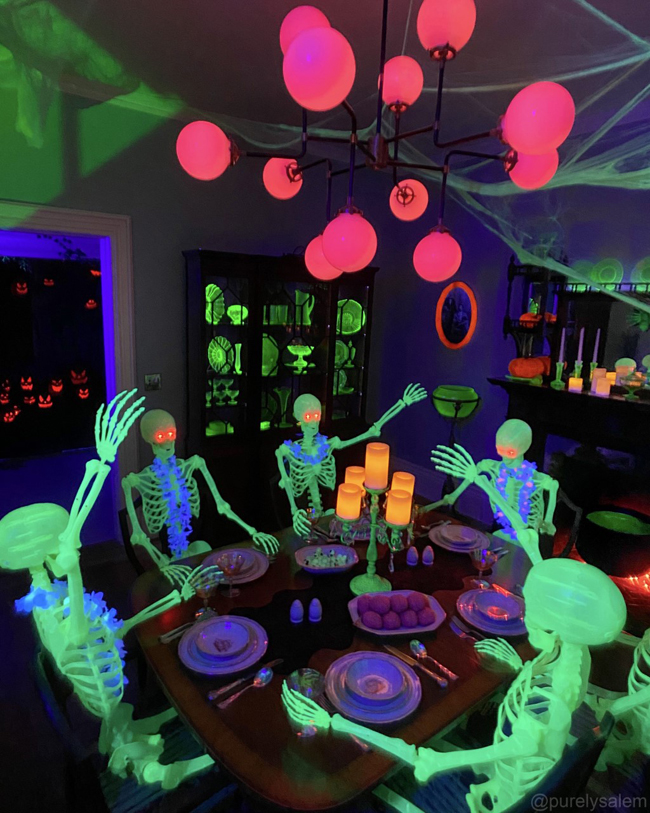 The real magician here, though, is the lighting. Tim was inspired by an article in the October, 2008, issue of Martha Stewart Living magazine called "Night Visions" by Julie Mihaly and Eric Piasecki. Black light, coloured bulbs and fluorescent paint and tape are used in the article to create projects that can be used in fantastical nightscapes and eerie Halloween scenes. Tim used the workbook in this issue as a guide to help bring it all together in their home, from fluorescent picture frames and candlesticks to setting up black-light installations that cast the rooms in an unnatural, ethereal glow. 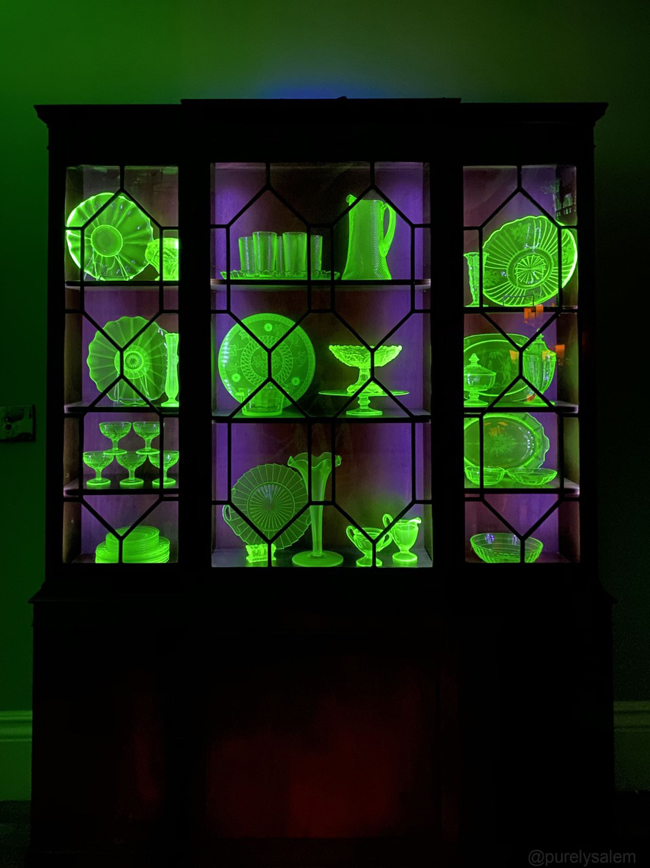 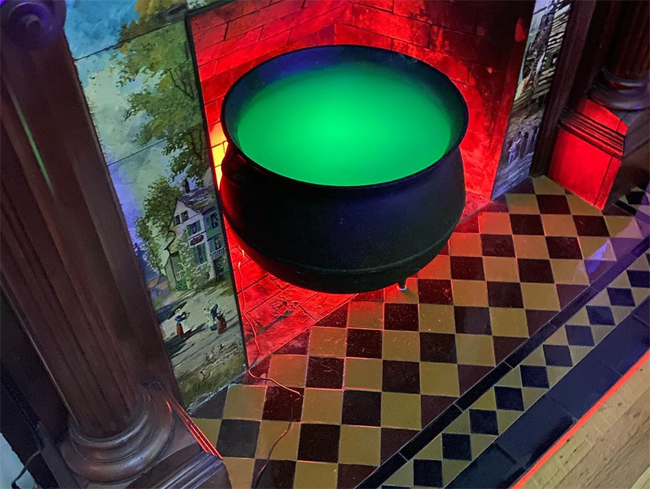 You can see more of their home on Instagram by following @purelysalem, which is run by Matt Obey. Matt also showcases many of his photographs of historic Salem throughout the seasons. All of the photographs in this post were taken by Matt. If you'd like to see a virtual tour of these rooms, go to halloweeninsalem.org to purchase a ticket. All profits go towards Historic Salem Inc., which preserves and restores historical sites. Happy Haunting! 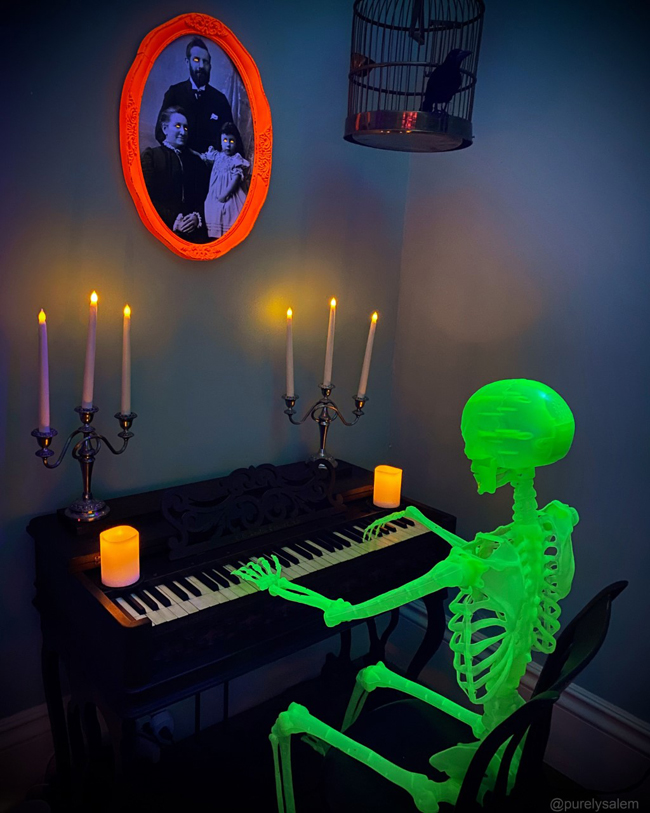 Posted by ANDREW RITCHIE at 8:43 AM

Amazing decorations every Halloween, and great neighbors year round!

One year a few "police" chalk outlines on the driveway macadam, a "body" shirt and stuffed pair of pants lay in the driveway to be found by those with a flashlight silly props to scare certainly not a photo op just wrap caution tape around the shrubs and trees to cause a panic-- works every time LOL

This house is amazing, Halloween decor and all!! What a stellar and enviable restoration! KUDOS TO TIM AND MATT!