A Sweet Classic From "Cake Perfection"

When I picked up a copy of Martha's latest book, Cake Perfection, I promised myself I would make the first one that really caught my fancy. Inexplicably, the one that most spoke to my senses, as well as my desire for a baking challenge, was the Meyer-Lemon Coconut Layer Cake on page 74 of the book. Perhaps it was the name of the cake with its tropical-sounding tartness that got me going, or maybe it was the glossy photograph by Lennart Weibull: four layers separated by coconut-lemon curd and candied citrus slices on top. Whatever the reason, I went grocery shopping armed with my ingredients list and plotted my plan of attack. 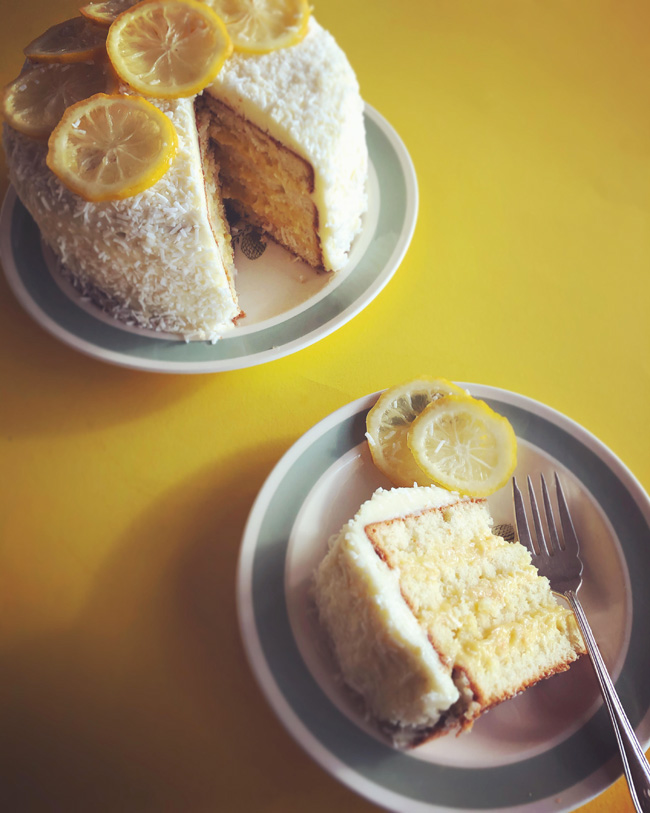 I say attack because I have never embarked on a cake recipe quite as complex as this before. I'm used to single or double layers, or loaves. This one required a bit of planning. There was the lemon curd to make, as well as the candied citrus slices, as well as the buttercream frosting as well as the cakes themselves. Some of the techniques were new to me: making a Swiss meringue as the base for the buttercream, slicing the tops off the cakes and then slicing each cake in half to create the layers. Child's play to an experienced baker, but a little more nerve-wracking for a novice. It was scary and so very exciting!

I took my time and followed the instructions very carefully. I came up with my own order of tasks: I began by toasting the coconut flakes, which were used in the curd and on the exterior of the cake as decoration - one cup for each purpose. Once cooled, I refrigerated them until I was ready to use them. I then moved on to the lemon curd, which I determined was delicious on its own after tasting a small spoonful. I let it cool and then refrigerated it as well. I then moved on to the frosting. I had never made a Swiss meringue before so this was new territory for me - and it showed.

Everything was unfolding as it should: the egg whites and sugar had been successfully whisked over a saucepan of simmering water; after ten minutes in the stand mixer with the whisk attachment, cool, stiff, glossy peaks formed. Wonderful, I thought! Then I added the coconut oil and the butter (room temperature) and things got a little wild. Everything turned into a soupy mess. I almost cried. I didn't panic, though, and put it in the fridge until it firmed up, hoping I would be able to reconstitute it with the mixer when it came time to frost the cake. I then made the cakes, which turned out beautifully. Confidence restored! 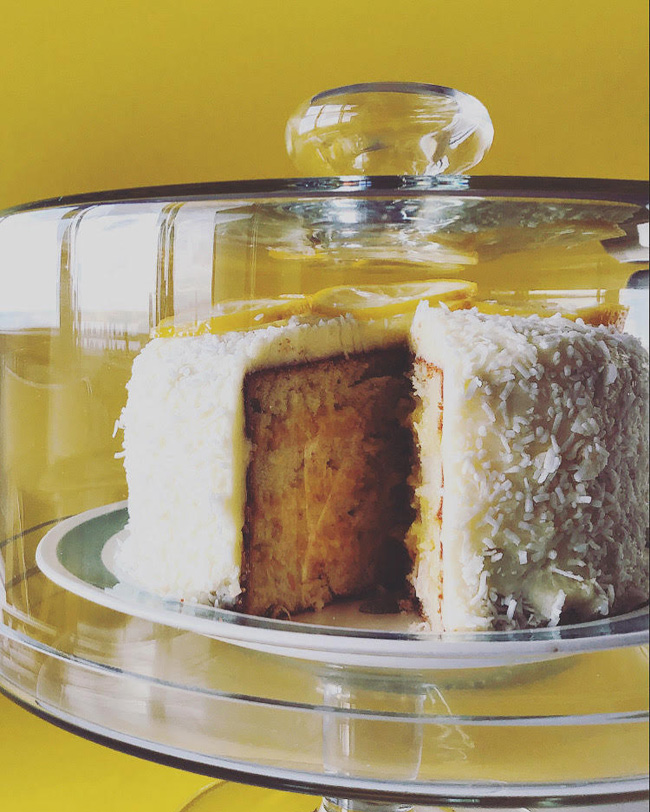 After the cakes were fully cooled I took on my second patch of new territory: slicing the cakes to make four flat discs, which would then be layered with the lemon curd and finally frosted with the buttercream. Slicing the rounded portion off the tops was easy enough. I then decided that the best way to slice the cakes in half was to place them in a dish with slightly raised sides. I rested my knife on the top of the raised edge, keeping it flush. I then turned the plate while holding the knife steady, resulting in a perfectly straight cut through each layer. Success! I mixed one cup of the coconut flakes into the chilled lemon curd and began to assemble the cake, which proceeded without any difficulty. I let it set in the fridge, as directed.

Now... back to that scary buttercream. With nothing but faith and hope in my heart, I placed the room-temperature buttercream back into the mixer - curdled, soupy, weird. I began slowly with the paddle attachment and then increased the speed to medium high. After about four minutes the frosting actually looked like frosting and all was right with the world. I was able to exhale. I frosted the cake, adding the second cup of toasted coconut flakes to the sides and top, and refrigerated it to set.

The candied citrus slices were simple. Mine, however, were sliced too thickly. I really ought to invest in a mandolin to get those paper-thin slices required for such garnishes. But I used my knife skills (which were not as successful as they were when slicing the cake layers, seemingly) and I ended up with slices that were too thick to properly simmer in the simple syrup: they were meant to be entirely translucent. They did soften and become sweet but they were not the sleek, glassy confections depicted in the photograph in the book. No, not even close. I used them anyway because I enjoyed the hit of yellow, and they actually tasted quite good, if a little chewy.

All in all, I was pleased with how it all turned out and was quite proud of myself. And, always, the final test is how good the cake tastes. This one is a hit! The cakes were fluffy and moist, the curd was appropriately tart with little flecks of toasted coconut mixed in for a nice bit of texture, and the frosting was creamy and glossy and not overly sweet, which I enjoyed. I like the sophisticated nature of a frosting that's not cloyingly sweet.

I will make this one again. But next on my list is the Milk-and-Cookies Cake on page 81 of the book. This one will be all about nostalgia.

If you enjoy baking and haven't yet got a copy of Cake Perfection, I'd urge you to consider it, or at least put it on your Christmas or birthday wish list. I'm enjoying it thoroughly! 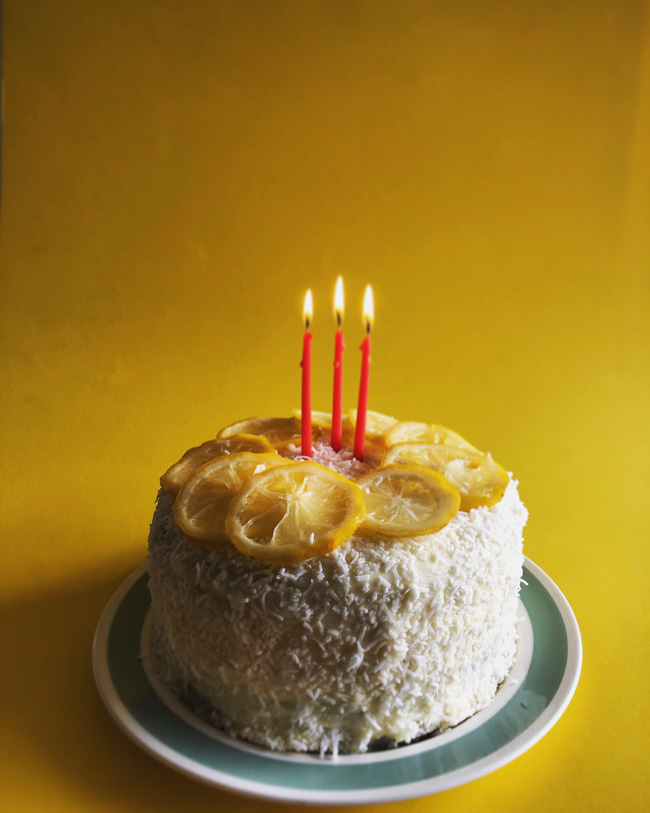 I did not have a birthday to celebrate, but somehow the cake begged for candles!

Posted by ANDREW RITCHIE at 1:57 PM

I pack my lunch each week day. I use blue ice packs to keep the items cold. Having a blue ice pack or frozen peas might work to "Ice" the mixing bowl down-- surround the bowl to chill it while mixing--- just a thought--- Ermine frosting is another tricky frosting it looks like a mistake but as the air is incorporated it eventually transforms. your cake looks great what size pans did you use? The cake decorator in the bakery I worked at ( summer part time job ) would slice the layers straight from the freezer. In a bakery there is always a supply of frozen layers to a keep up with the demand but a chilled cake certainly helps the frosting set right?

I love these tips, thank you!