One of the many things I love about Skylands, Martha's home in Maine, is how she has chosen to decorate it. She has perfectly mixed refined elegance with rusticity and whimsy by pairing contrasting textures, all the while maintaining the home's traditional atmosphere. Of Martha's residences, Skylands is my favourite. One of the best decorating choices Martha made, in my opinion, was using her collection of faux bois in her indoor decorating scheme. Faux bois (which means 'false wood' in French) is a decorative technique that mimics the physical qualities of wood, whether it is the grain, the texture of the bark or the gnarled shapes of tree branches. Martha's collection is quite extensive, encompassing both antique examples from England and France as well as new pieces that she had specially commissioned for Skylands. 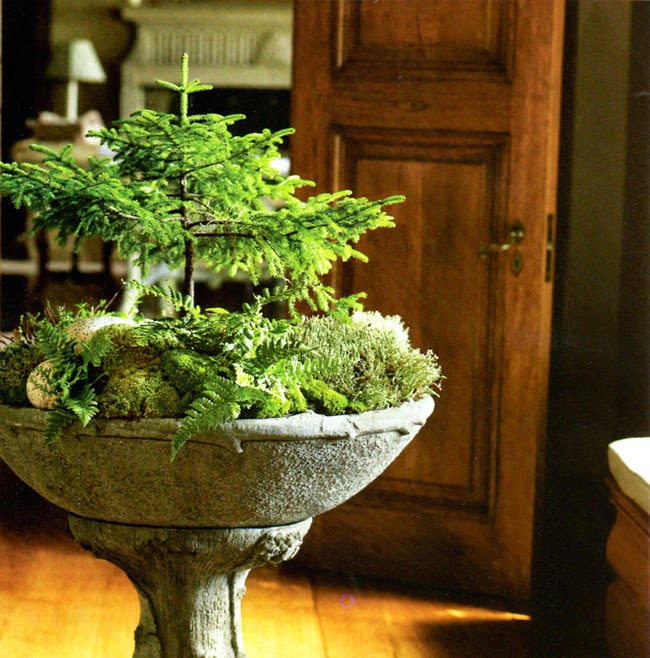 "When I started collecting, I found most of the pieces at antiques shows -- such as the New York Botanical Garden show in May and the Lexington Avenue Armory Garden Antiques Show (which now takes place in Chicago) -- and at several Maine, Connecticut, and New York dealers, including Bob Withington in York, Maine, and John Rosselli and Judith and James Milne in New York City. I bought planters, chairs, benches, luncheon tables, and stands," Martha writes in her book Martha's Entertaining.

She initially began her collection with the intention of using the urns, pots, garden tables and planters outdoors. The grandeur and scale of Skylands, however, was the perfect place to use her faux bois indoors, scaling back the opulence of the home with its woodsy charm.

There are two primary materials that have been traditionally used to make faux bois furniture: cast iron and cement. Martha prefers the cement variety because of its texture and solidity. When styled correctly, it most closely resembles the trunks of trees with their rough bark and their knotted branches. Below are some examples of Martha's faux bois collection at Skylands. 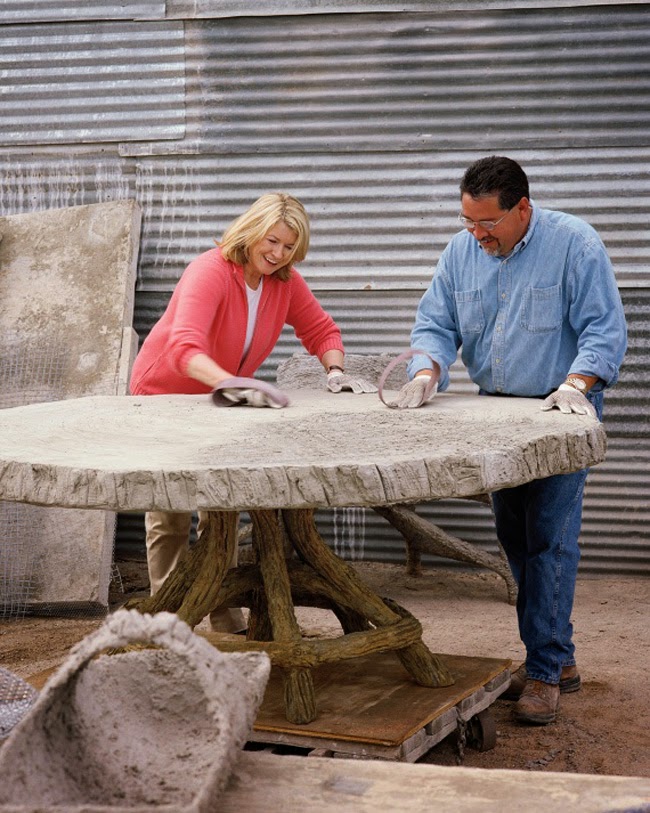 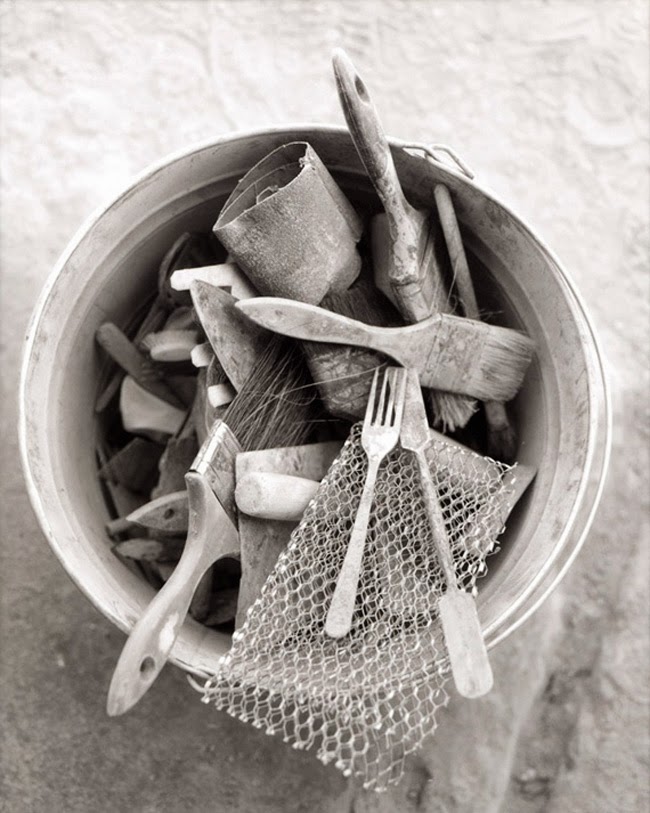 The materials Carlos uses are simple (concrete, steel wire, rebar), and his tools rudimentary (sticks, coarse brushes, rough abrasives) but his finished pieces are works of art. The screen holds the mortar and gives a piece its shape. The paintbrush is handy for pushing concrete into the screen, and the fork and the trowel are used to carve intricate wood-grain motifs. 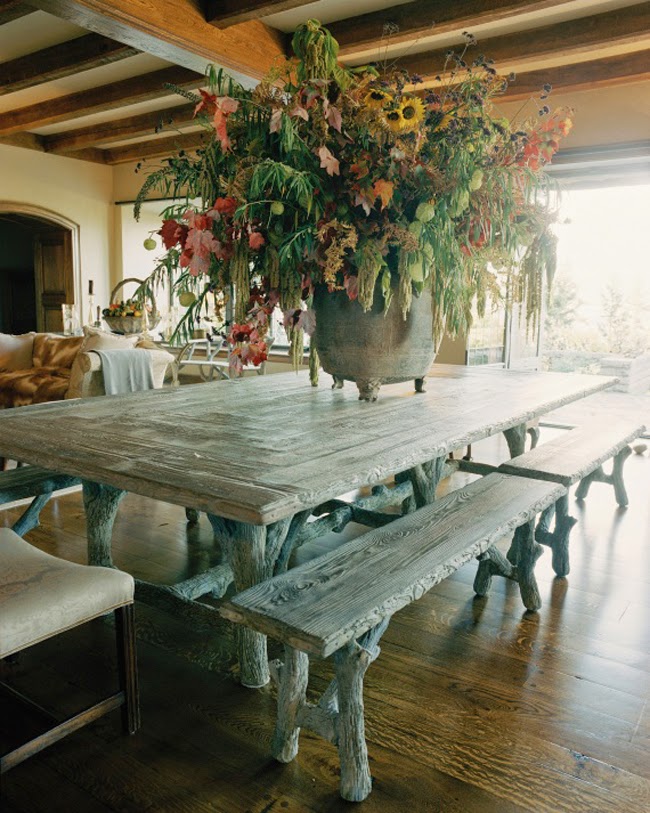 The larger of the two tables that Carlos made weighs a ton - literally! The tabletop alone weighs over 1,200 pounds. It took twelve men to move the table into the Great Hall at Skylands. 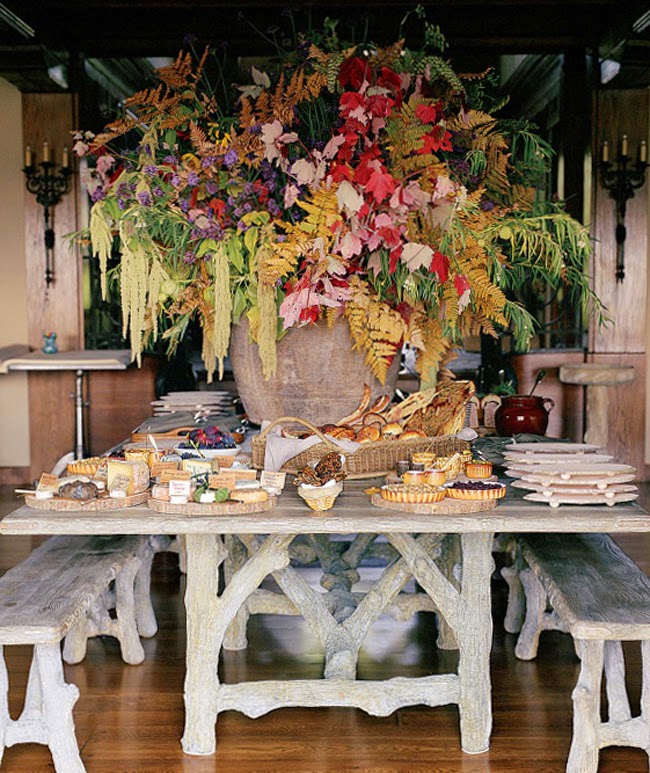 Here is the table decorated for an afternoon paté campagnard lunch. A massive Han Dynasty-era urn holds an autumnal arrangement by Kevin Sharkey. 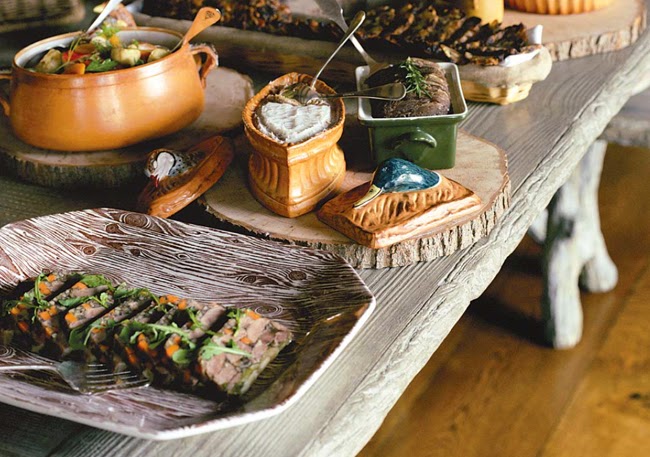 Martha reiterates the faux-bois motif with faux wood-grain serveware and actual tree-trunk slices that act as trivets for warm terrines of paté. 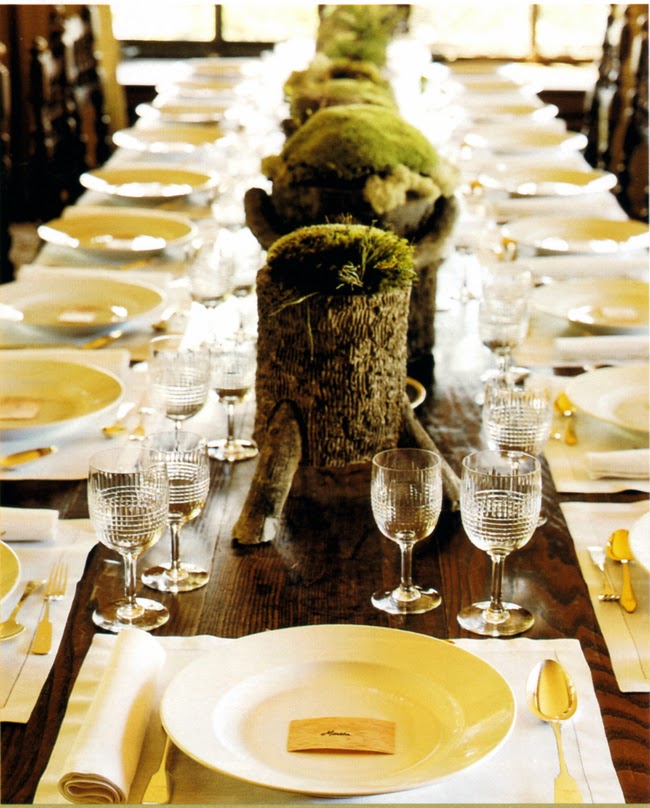 A series of faux-bois planters from the 1800s and 1900s is used as a centerpiece for the dining room table. Martha planted each pot with mosses from the surrounding woodlands. 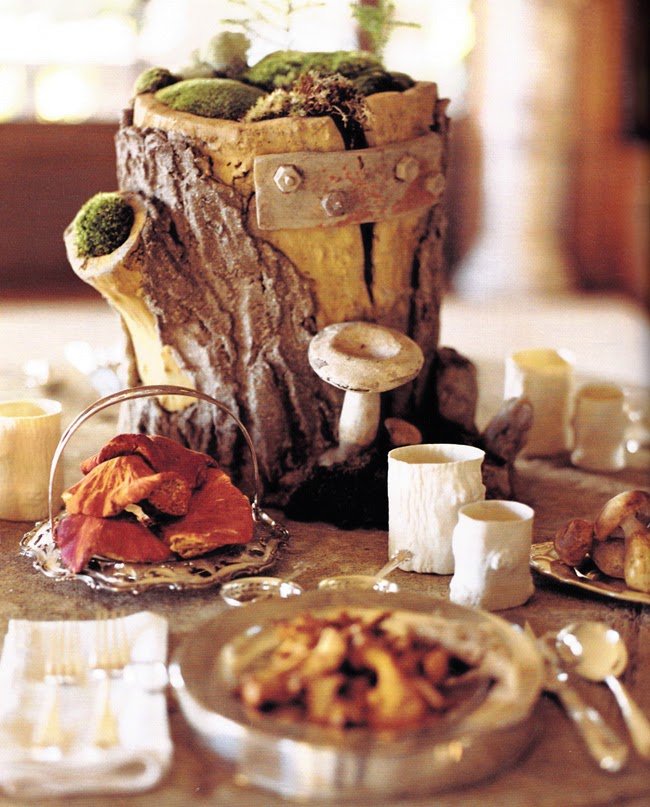 A close-up of one of the planters reveals its many artistic charms and details: the effect of peeling bark, a crack that was intentionally sculpted and 'repaired' with a faux-steel bracket, even a mushroom growing out of its base. 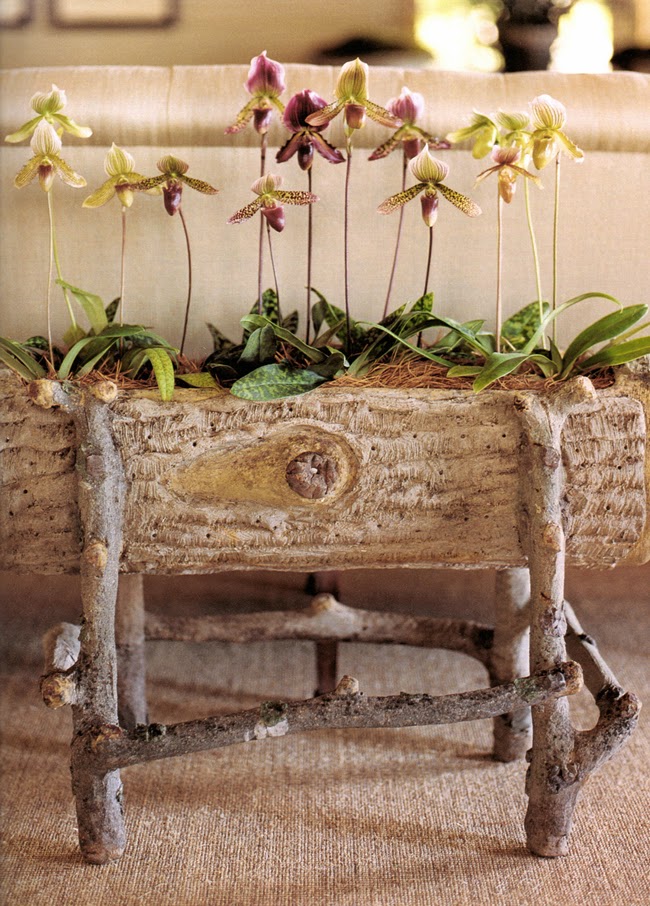 In the living room, the subtly contrasting textures and tones of silk-linen upholstery and a sisal rug play up the intricately modeled surfaces of a cradlelike planter. Separate pots of Venus' Slipper orchids are tucked out of sight by a blanket of pine needles collected from the woods outdoors. 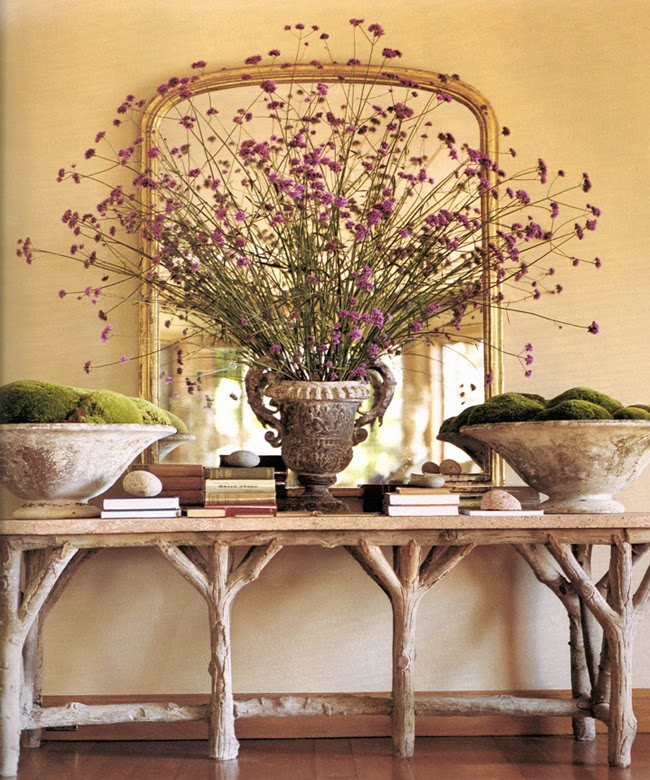 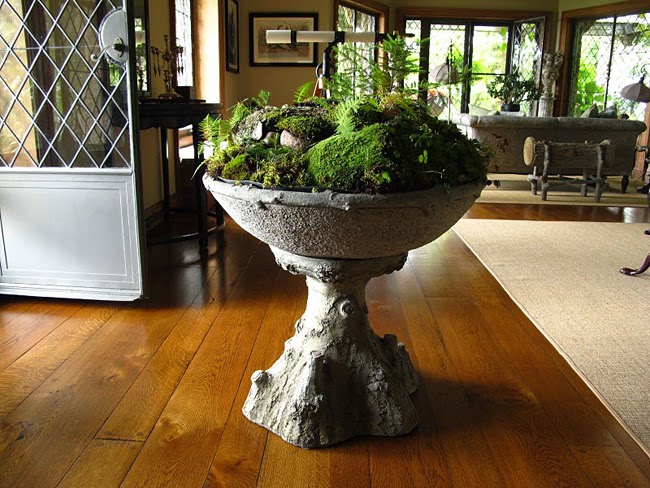 Another microcosm of moss, ferns, stones and tiny saplings echoes the landscape beyond the walls of Skylands. Inside this faux-bois planter, the miniature setting truly comes to life. 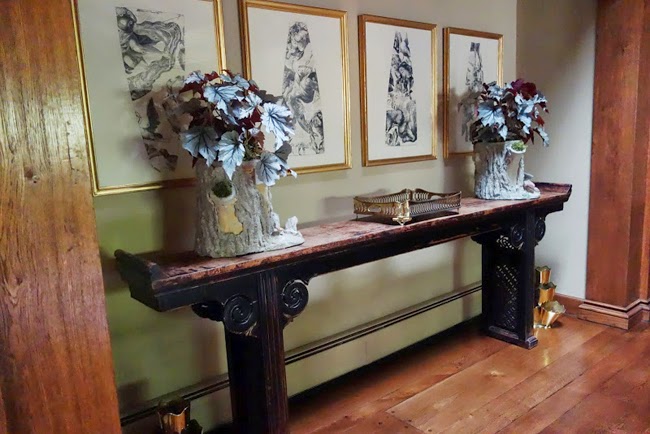 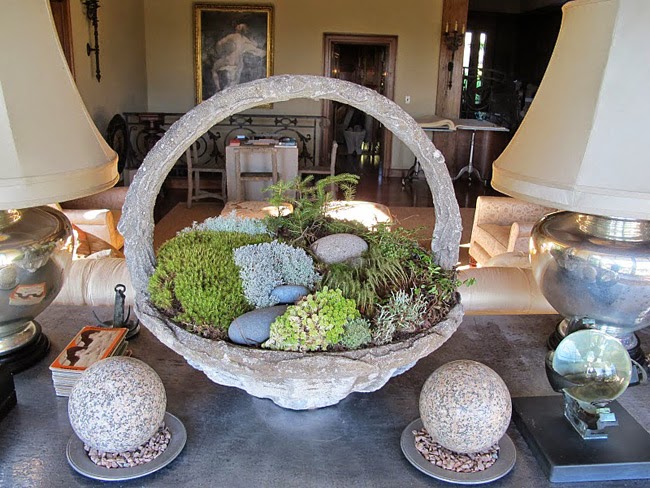 In the living room, a faux-bois basket plays the centerpiece in a symmetrical table setting. 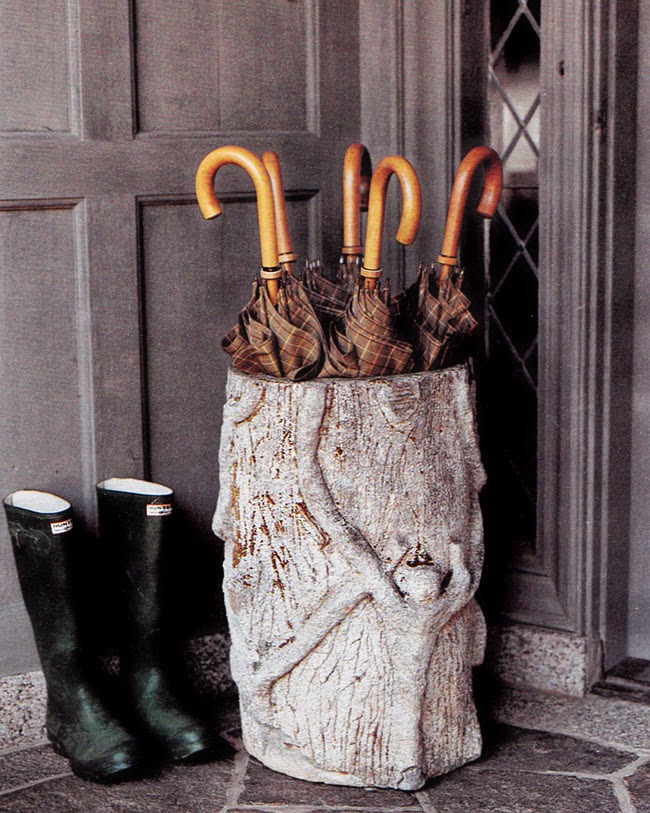 This faux-bois planter proffers umbrellas for guests on the front stoop. 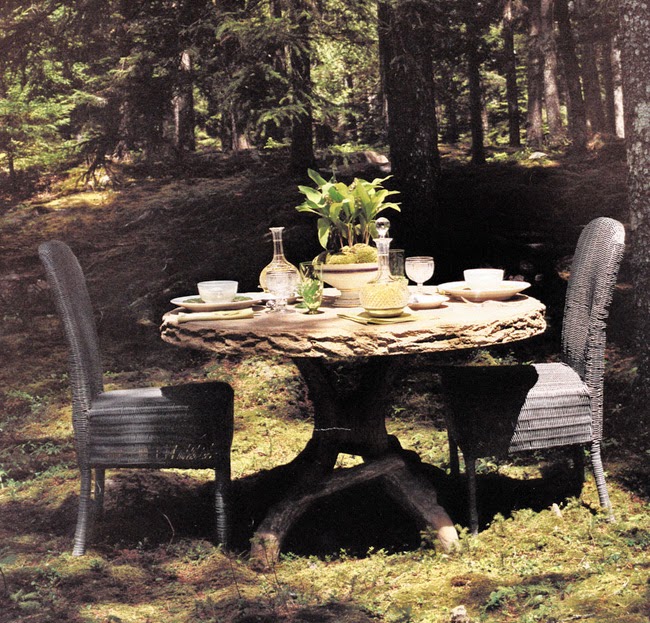 A rustic faux-bois table on the moss-covered ground at Skylands enhances the elegance of fine dinnerware.
Posted by ANDREW RITCHIE at 6:27 PM

While all of Martha's homes are all very beautiful, Skylands is also my favorite.
It detailed design appears formal but relaxed comfortable. The blend of furniture with the
faux bois pieces is inspired and my belief is Martha is the trend setter on the use of faux bois in interior design.
APM

Ahh faux bois...what's not to like about it. There are a few highly skilled craftsmen and women keeping the art alive at the moment.

They all bring their own take to it and I find their art truly sublime.

I do love the collection of faux bois furniture Martha has. I love that she commissioned the large table in the great room of Skylands -- it showcased the grandeur of the estate and her wealth. Because, how could your jaw not drop to the floor when you walk in the house for the first time and see a huge floral arrangement by Kevin Sharkey and the scent of Maine blueberry muffins. Oh, I would love to be invited to this house someday.