The Editor-in-Chief at Home

Eric Pike, the Content Director and editor-in-chief of Martha Stewart Living magazine, looks at colour all day long. From vibrantly-hued fruits and vegetables to multi-layered patterns on fabric swatches, his eye rarely gets to rest. This is why Eric chose to surround himself with a palette of neutrals at home: pale grays and taupes, accentuated by light blues and warmed by wood tones. The first time I saw his apartment in the September, 2005, issue of Martha Stewart Living, I became greatly enamoured of his style. 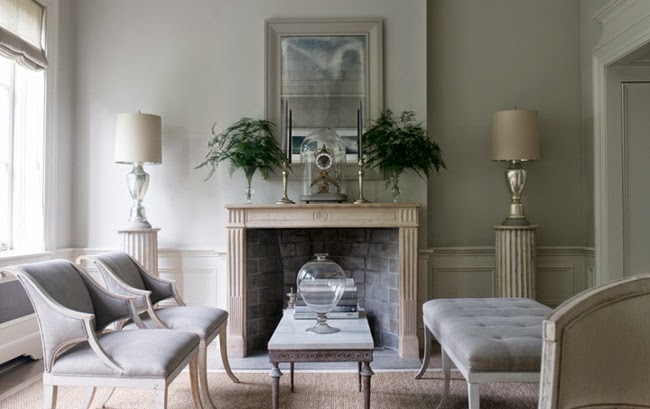 It took Eric a while to find the perfect place to live, but just over a decade ago he did. In 2001 he moved into the top floor of an 1840s Federal-style townhouse on a historic block in Manhattan. The dark pied-a-terre needed a serious facelift, however, and he embarked on a renovation with New York architect Richard Perry. Eric's goal was to create a calming, classic environment that was "not quite minimalist" but definitely spare in decoration where everything was thoughtfully placed to be both functional and attractive. Eric's collection of antique Gustavian Swedish furniture lent itself perfectly to the colour scheme, which was inspired by birch bark, driftwood and beach stones - the calming hues of an overcast day.  Eric also installed a decorative fireplace in the livng room, shown above. The nineteenth-century limestone mantel was a gift from Martha. 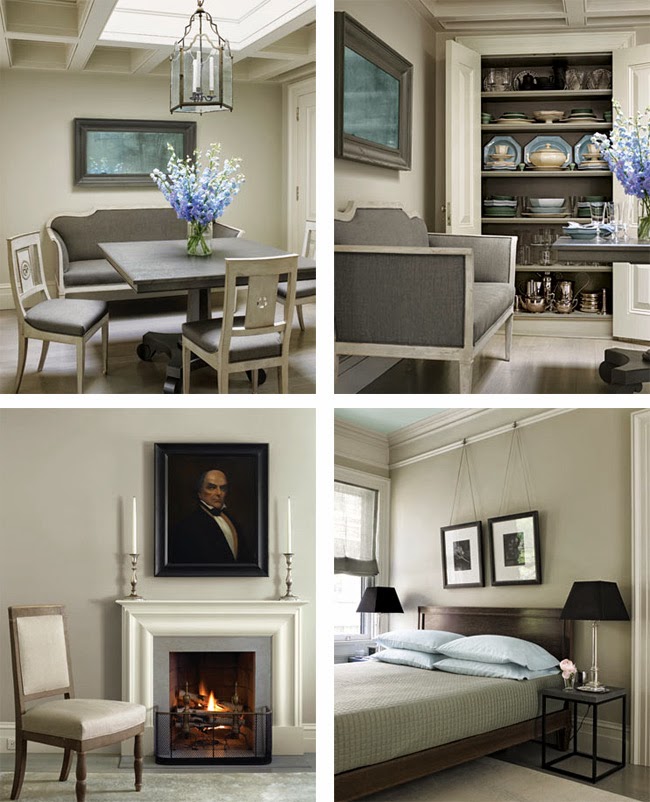 Because the apartment building has windows only at the front and the back of the edifice, skylights are used to great effect in Eric's home. There are four in total: one over the entry stairwell, one in the front entrance, one in the bathroom and a very large one in the dining room, casting natural light into the interior of the apartment all day long. 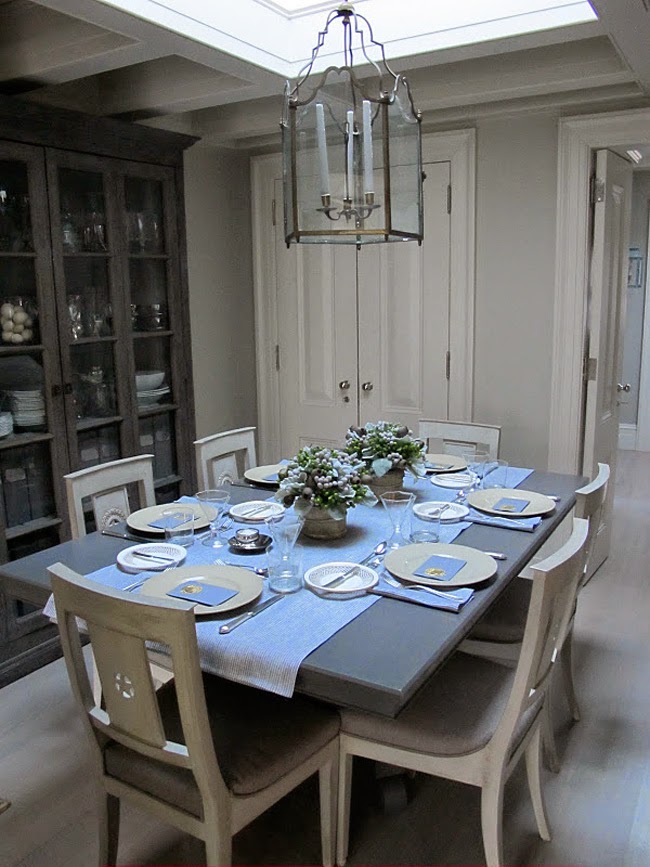 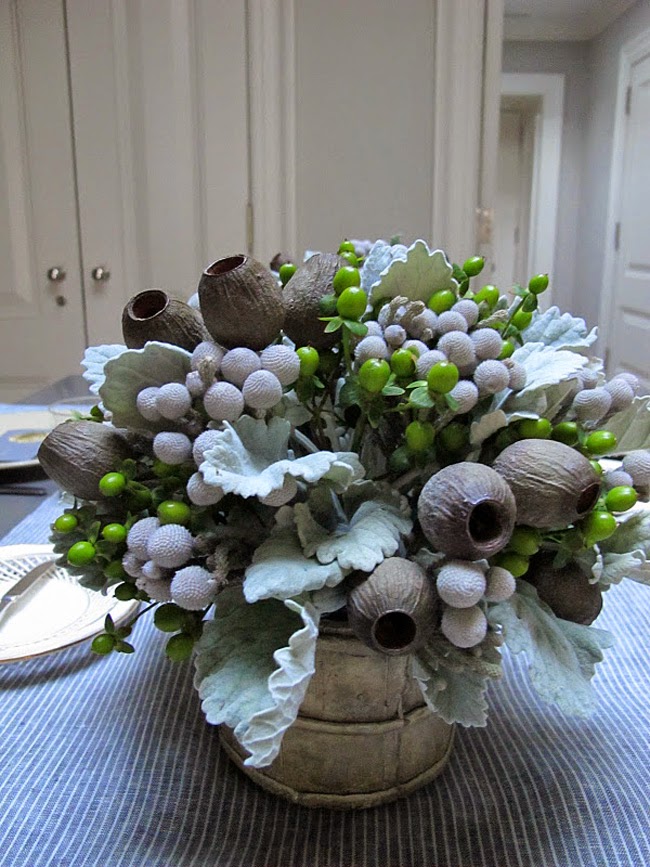 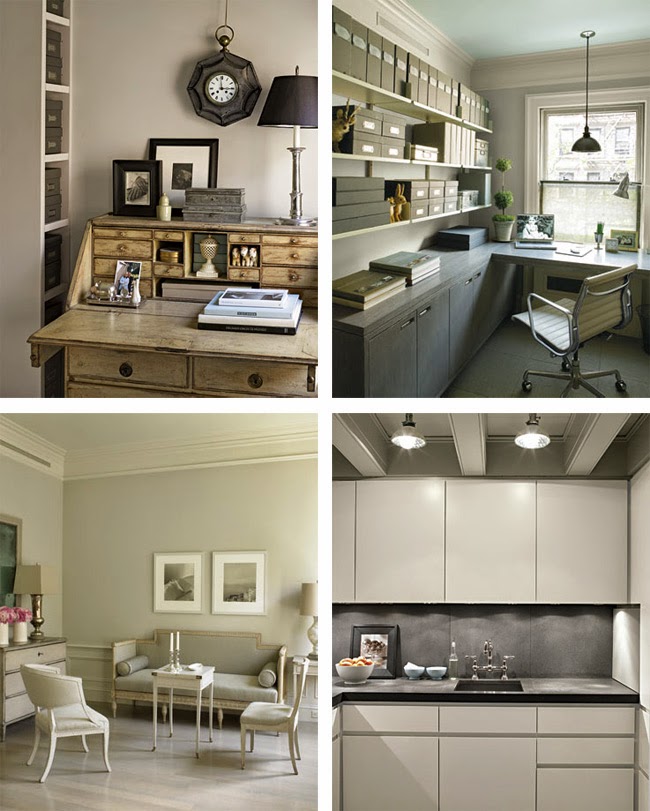 Eric is something of a collector and one of the challenges of living in a small space meant finding places for everything while still maintaining that clean, pared-down look. Eric employed several tricks and strategies to keep things looking sparse while still storing his things neatly. In the kitchen, for instance, cabinets were designed without hardware, concealing appliances while keeping them accessible but off the counter. Electrical outlets are hidden under the top cabinets to further minimize visual clutter. The refrigerator door and the door to the stacked washer and dryer unit are painted the exact shade of gray as the rest of the kitchen, seamlessly blending the appliances into the room so that they recede gracefully into the facade. 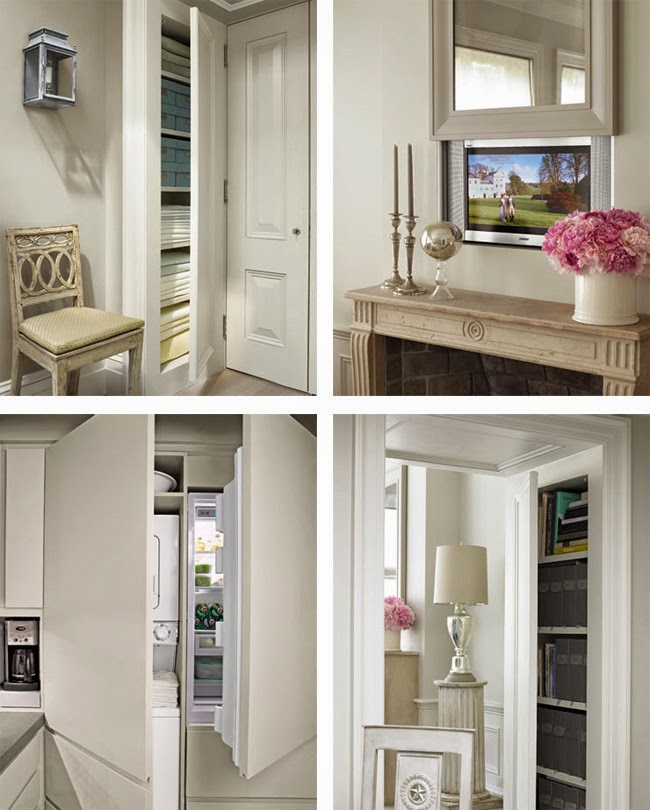 Behind the mirror in the living room, over the mantel, Eric has tucked a flat-screen TV. In many of the corners and archways of the apartment, Eric has maximized storage space by carving out niches for hidden shelving and storage closets - all of which are kept hidden behind sleek doors that are barely visible.

SMALL-SPACE LESSONS FROM ERIC'S APARTMENT
Decorating a small space? I think Eric's apartment is the perfect example of how you can live on a smaller scale without sacrificing even a hint of elegance and grandeur. Below are five lessons we can all learn from Eric's decorating choices:

1. Small spaces do not have to be cluttered. Provided you invest some time to really consider where furniture should go, you can find a spot for just about anything.

2. Small spaces do not have to be dark. Eric chose a unifying, monochromatic scheme to keep his home looking cohesive, thereby making it feel larger. If each room had been painted a different shade, the effect would have looked fractured, accentuating the smallness of each room rather than the grandeur of the entire space.

3. Invest in light. The skylights in Eric's home bring natural light into the apartment where windows could not. To further assist the distribution of light, Eric uses a lot of reflective silver and mercury glass objects in his decorating scheme.

4. Think strategically. Every nook and cranny in Eric's home has a purpose: every alcove, every archway. Maximize space by finding it anywhere and everywhere and then work to seamlessly blend and conceal those spaces.

5. Know what you want to see when you walk through the door. Eric had a very clear vision of what his apartment should look and feel like. To give his eye a rest from the kaleidoscope of colour he looks at all day in photo spreads and prototypes, he chose a restful gray palette. Perhaps you need the opposite: a vibrant, colourful palette to perk you up after a day of paperwork and LCD screens. Assess your emotional needs, as well as the practical ones, and go from there.
Posted by ANDREW RITCHIE at 8:29 AM

I remember this article in the magazine several years ago and have taken a liking to Eric Pike. I too love the color palette and how he incorporated his collections into the space. I was really excited when he took the helm of the magazine because I felt it should be run by a "veteran" MSLO team member, and not someone from the outside who didn't have the essence of Martha.

I would love to see an update on what his home looks like now. I can imagine a few Hermes orange throw pillows in his living room welcoming autumn.

Without doubt a very handsome and understated apartment . Besides the decor and accessories, the details including the finishes , moldings and hardware are exceptional.
APM

Trellis, it's nice to hear from you again!

1840's you say. My word. I would say that perhaps there has been a "culture shift" back "then" folk walked to work, rode in Handsome cabs, walked down stairs to the office??? Now public transportaion shuttles one to the place of employment?? What will life be in 2064, any thoughts Andrew??

Love the wall color. Would love to find a similar color to use in every room for my own home.