I was asked recently how Martha Moments came to be. The genesis for the idea of hosting a spot online that celebrates and archives all things Martha Stewart actually began almost 20 years ago when one Sunday afternoon I wrote to the host of another Martha Stewart fan site called SaveMartha.com. The host was John Small, a native New Yorker who had set up a site devoted to exposing what he believed to be the 'witch hunt' behind the investigation into Martha's infamous stock sale back in 2001, which eventually led to criminal charges of conspiracy, lying to federal investigators and obstruction of justice in 2004. John's prescient instincts were right on point: the unfairness and injustice surrounding Martha's case reeked of malfeasance. 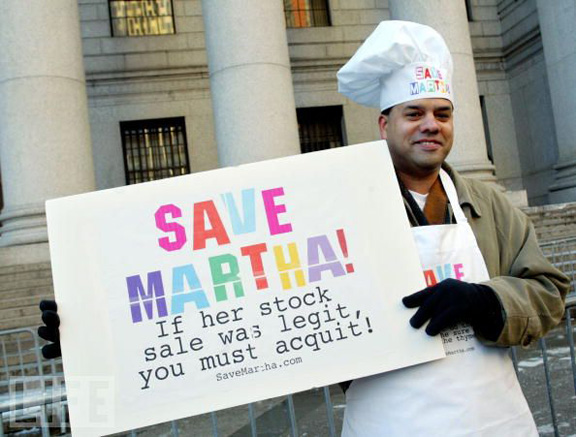 I had been reading Martha's magazine, Martha Stewart Living, since the late 1990s and had grown to become quite fond of her and her brand. When I came upon SaveMartha.com I felt as though I could lend my voice to a growing chorus of fans who felt Martha was being unfairly treated by the press as the investigation into her affairs continued to become amplified. John happily accepted my offer and we quickly became close collaborators, coming up with ideas for web content and strategies to raise awareness about the case.

My contribution began with a weekly serial I called "Deconstructing Byron" -  a reference to one of my favourite Woody Allen movies, Deconstructing Harry. The aim was to examine the writing style used in the latest unflattering biography about Martha at the time, called Martha Inc. by Christopher Byron. The book is steeped in misogynistic language and unsubstantiated hearsay. Chapter by chapter, I sought to expose Byron as an author with an agenda: to get back at Martha for declining to take part in his book. Throughout Martha Inc., his tone is nasty and goading, not at all the tone of a serious biographer interested in telling "The Incredible Story of Martha Stewart Living Omnimedia" as the subtitle suggested. 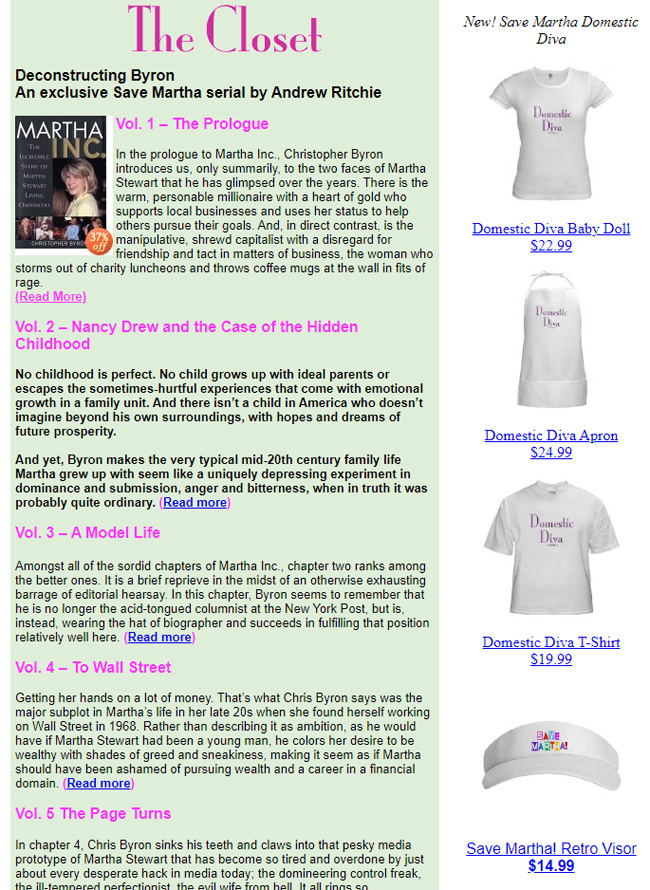 I was pleased to see recently that John has kept that serial intact. Many of the segments I wrote as an earnest 24 year old are still there for perusal. He has grouped them in a section of the site cheekily called The Closet - you know, where the skeletons live. You can click here to access them.

I would also contribute the occasional lifestyle article to the site, ostensibly to remind readers why we loved Martha to begin with: her interest in celebrating the home and everything to do with its environment and upkeep. These articles were kept in a section of the site called The Pantry. You can click here to read some of those. 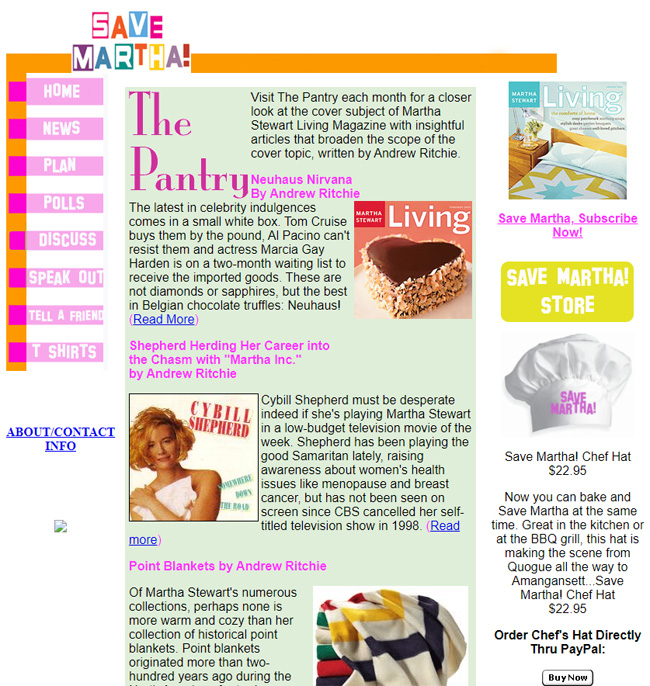 It was John, however, that gave SaveMartha.com its authoritative voice. He appeared numerous times on major American networks, speaking for so many of us who felt that Martha was really getting a raw deal. During her trial, John also organized gatherings of fans to protest outside the courthouse, further drawing attention to the possibility that Martha was being persecuted more than she was being prosecuted. 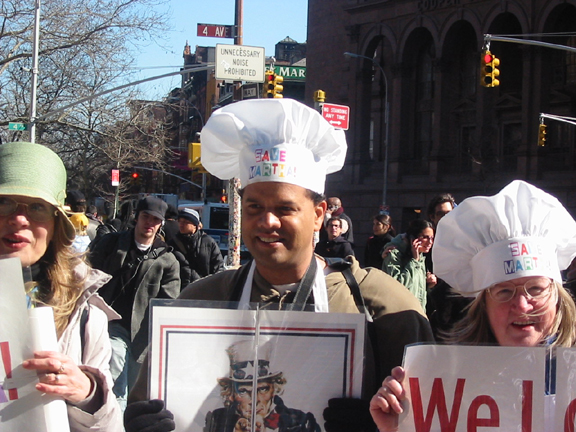 John was also a rather intrepid entrepreneur and offset the cost of spending so much time on the site and speaking with the media by producing a large amount of Save Martha merchandise: mugs, ball caps, t-shirts, chefs hats, aprons, stationery, etc. I received many of these items as a kind of payment for the writing I did for the site. I still have one of the mugs safely tucked away, as well as a t-shirt and ball cap.

One of the ideas John and I came up with together was to organize group shopping sprees at Kmart to help support the Martha Stewart brand by buying large amounts of her Everyday products. I also suggested putting up a photo of the latest issue of Martha Stewart Living in the upper corner of the website with a direct link to the online subscription service in order to bolster magazine sales. 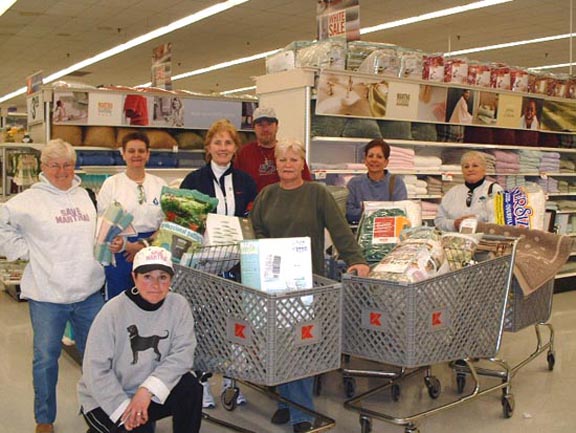 In the end, our efforts didn't entirely pay off. Martha was convicted of her charges and she was sent to prison in 2004 for five months, followed by a five-month period of house arrest and then several months of parole. She had to relinquish her seat as chairman of her own company and could no longer serve on any board of directors. Several hundred people at her company lost their jobs as a result of the trial and her television show was cancelled. It was a very dark time in Martha's life - and in the lives of her supporters, viewers and readers.

Ultimately, I was glad to have been a part of SaveMartha.com. I'm quite proud that we were able to at least raise some kind of awareness and start a conversation about the misogynistic leanings of so many people in power, from government officials to biographers to a ravenous press that seemed to relish in the pain and downfall of a woman who had worked hard all her life to achieve great success. And all because of some ill-timed stock sale.

John and I have never met in person, which is too bad. We lost touch over the years but I always think of him fondly.

After Martha was freed and was clearly back on her feet with two new television shows, new magazines and new books, I felt it was time to start something fresh of my own: a place to showcase and archive all of  Martha's great work, from her magazines to her books to her products, all of which have inspired me (and so many others) to develop new skills and learn new things. 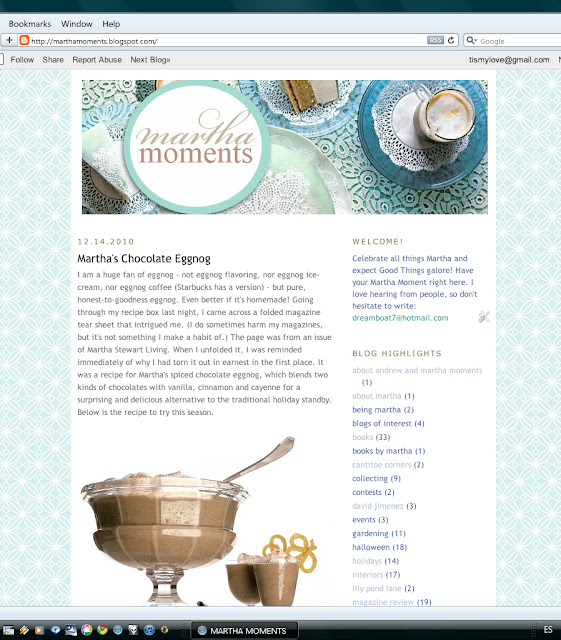 I started the blog on Mach 6th, 2006, and called it Martha Moments. The idea for the name "Martha Moments" actually came from Oprah Winfrey. I had been watching her show one afternoon and her guest, Chef Mario Batali, asked Oprah to daintily brush some oil over some handmade raviolis. Oprah loved doing this and exclaimed: "I'm having a Martha moment!" I knew then that's what the name of the blog was going to be. It was perfect. A Martha Moment could be anything that made you think of Martha Stewart, whether it was something as direct as a product, book or magazine bearing her name, or something as simple as a beautifully-crafted wreath made by a local artisan. If the Martha ethos was evident, it was a Martha Moment.

Since then, the blog has not changed much in terms of design or intent. What pleases me most, however, is that I know Martha is happy with the blog. That feels good.