A Look Inside the First Issue

It took me years to finally accept that I needed to have the first issue of Martha Stewart Living magazine in my collection. For so long I had told myself that paying upwards of $60 for a magazine - no matter how coveted or collectible - was simply not something I was willing to do. Well, I caved. I found a copy on eBay for exactly $60 with a reasonable shipping rate so I bit the bullet and bought it. It arrived last week and I have been examining its pages, imagining how exciting it must have been for Martha and her team to finally see a published issue on the newsstand. In November, 1990, it made a huge impact on the publishing world and from there Martha never looked back. Below I've shared a look inside the pages of this rare issue. I hope you find it enjoyable! 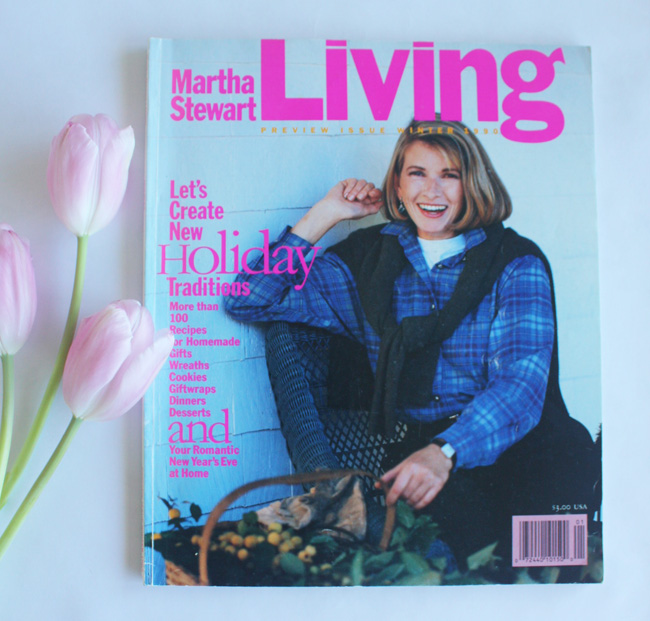 Putting a photograph of the magazine's founder on the cover was unheard of at the time, as was naming the magazine after her. By 1991, however, Martha understood the power of branding. Her face was recognizable through her television specials, print ads with Kmart and subsequent commercials for the retail giant. Daring though it may have been, it simply made sense to put her on the cover. The photograph was taken by Neil Kirk on the balcony off Martha's bedroom at Turkey Hill. Martha's shirt, pants and belt are by Louis of Boston. Her sweater is Armani; her t-shirt is Hanes. The watch, of course, is a Rolex. 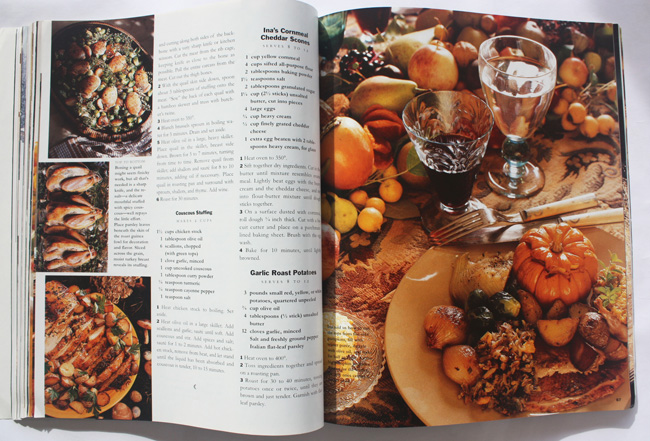 All the hallmarks that make Martha Stewart Living recognizable were immediately evident while I was browsing through the issue: lavish, full-page photographs of beautiful and delicious-looking food abound throughout the issue. Martha really was the pioneer of this photographic vision. No other American publication granted full-page status to food photography. Gael Towey was the creative director on the project and helped spearhead this inventive new look. She went on to spend over 20 years at the magazine with Martha. 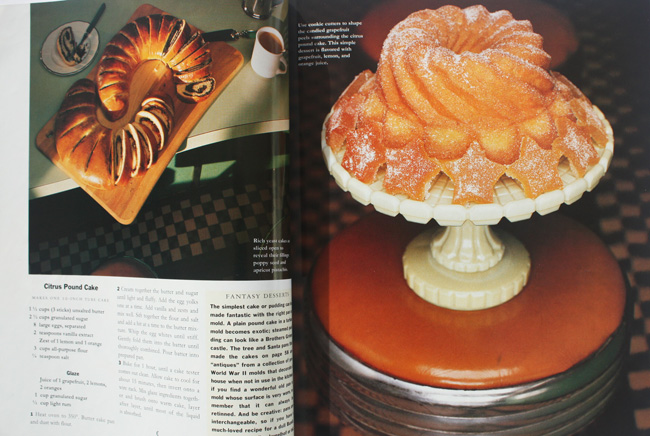 The first issue was a holiday issue with a focus on holiday entertaining and food preparation. The editorial shown above was devoted to holiday desserts, photographed in an old diner. 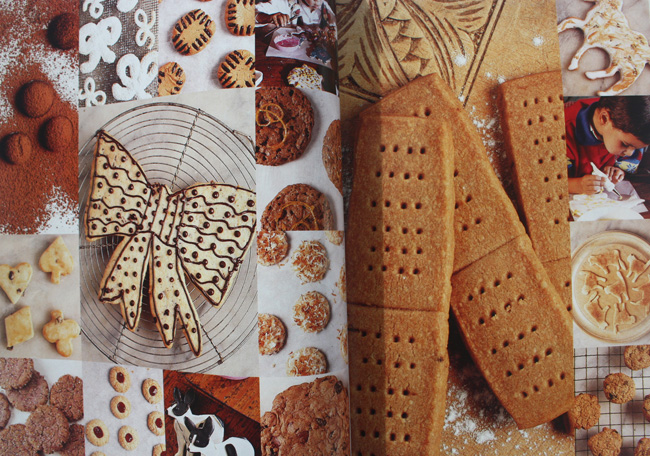 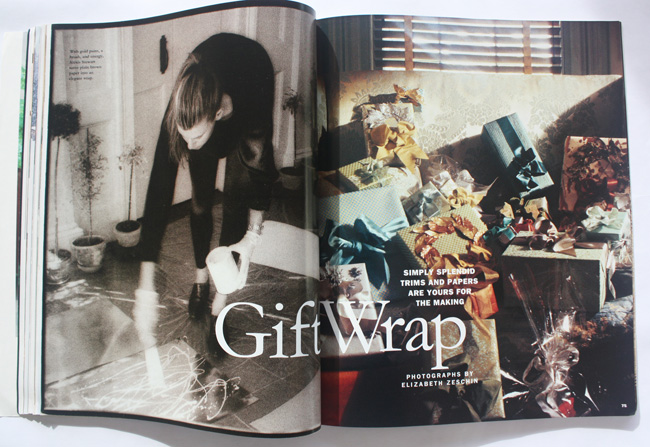 Alexis Stewart, Martha's daughter, makes her first appearance in the pages of Martha Stewart Living magazine in this article on homemade gift wrap. 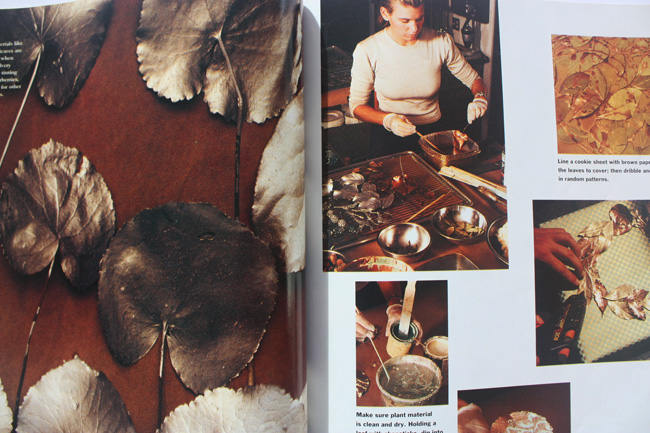 While the ideas may look a bit dated by today's modern standards, they are extremely creative and the results are extremely beautiful. 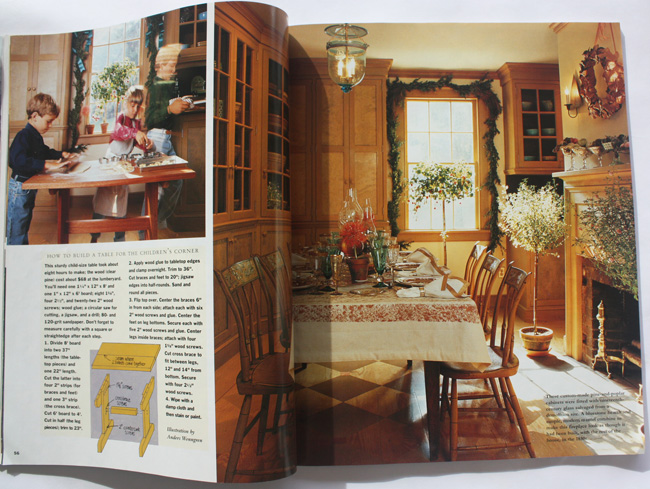 The kitchen of the Adams House, a Connecticut historic home that was renovated and auctioned by Martha for charity, was the subject of this decorating feature. Martha documented the entire process of renovating this house in her book "Martha's New Old House". She also made several VHS videos of the process, which she sold at Kmart and through phone order. 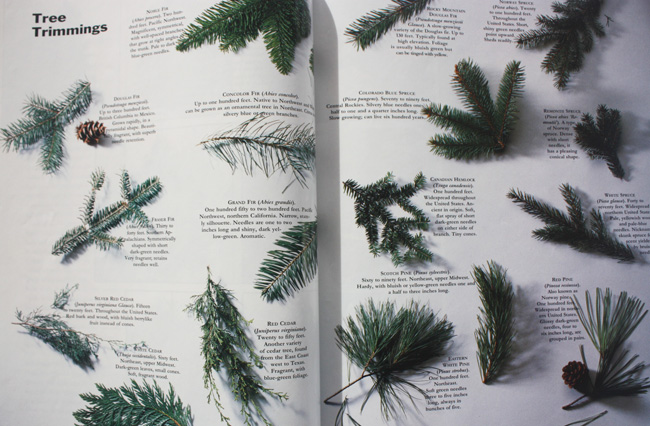 The first Martha Stewart glossary was devoted to types of conifers. 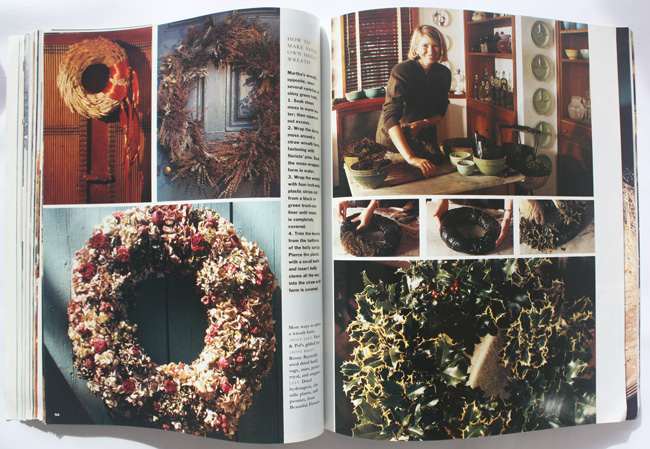 In the early '90s, Martha's name was synonymous with crafting. A full feature on how to make several variations of the holiday wreath is really informative. 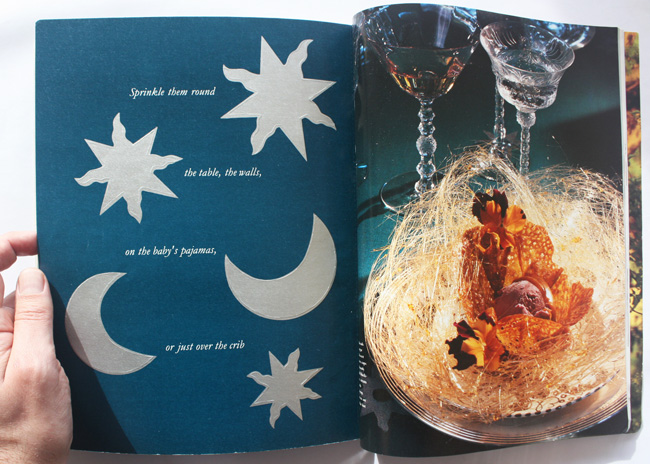 Perhaps my favourite feature of the first issue is this cardboard page featuring pop-out decorations for a New Year's Eve at home. The idea was to use the silvered moons and stars as decoration on the holiday table, or even to suspend over a baby's crib in a mobile. Then, the cut-out spaces could be used to stencil anything you desired: a gift from Martha to you!

ALSO IN THIS ISSUE:


After so long denying myself the joy of this issue, I must now urge everyone who collects Martha Stewart Living magazine to seek it out. You can occasionally find good bargains, as I did, but don't expect to pay less than $50 for it - unless you're really, really lucky! I hope you enjoyed this look back on this Throw Back Thursday!
Posted by ANDREW RITCHIE at 3:32 PM

I'm SO glad you finally have this issue.. it's a must have. At holiday time I always take a few minutes to page back through it. Its become a seasonal ritual!

You do such a great job photographing the actual magazine! Great look back at where it all started!

I have this issue too and remember how thrilled I was when I got it. Lots of memories. Thank you!

There were so many issues of similar quality, in fact the vast marjority were as detailed and beautiful.
APM

I'm with you on this Andrew! It is amazing when you thumb through those pages, what great 1st issue it was & the great trail that followed. I was so afraid to thumb through it when I got my copy and still do when I get it out to look at it!

I actually bought the premier issue at a book store here in Alaska--I don't remember which was published first--the magazine or Martha's first book but I recognized Martha and bought the magazine. Of course I have most of issues now and have a huge collection. I found another copy at a garage sale for 25 cents a couple of years ago and FREAKED out! The Christmas issues are grouped altogether and I re-read them every year. I used to entertain all the time and learned alot from Martha over the years.
Cheers, Vicki

If anyone is interested i just noted on Ebay the 1991 edition "http://www.ebay.com/itm/Martha-Stewart-Living-1991-Numbers-2-3-4-5-" which included the Holiday issue. The lot was listed as buy it now at $30
APM

What a difference this is from the current issues. It was full of all sorts of useful information. I still subscribe & have every issue but it certainly isn't the same

Slightly off topic......
Today I was watching a 17 second Valentine greeting video Ms Stewart added her blog. While a nice comment it illustrated to me how detailed/produced the early magazine and TV show was. My comment is due to a MS copper heart cookie cutter which she held up , it was neither polished nor even cleaned. Yes it was realistic, but it detracted from message and was the opposite of the exacting detail that helped create her empire.
APM

Andrew - I must admit I'm actually new to the Martha brand I have vague memories of my mom watching Martha on Saturday mornings but I literally stumbled onto a episode of Martha Stewart Living on youtube. I was amazed at what I saw in the old episodes. They are unlike anything I've ever seen on tv. I was immediately enamored with it. And yet I feel everything about her brand today stands opposed to the early vision she sought to bring to the masses. It breaks my heart to see what could have been if chasing fame and money wasn't the priority rather the continuing of the original vision.

Thanks for the memories. The Adams house was open to the public for tours before it was sold. My friend and I went on the tour and ran into Martha in the driveway. So exciting!

So Happy for you in adding the First Issue to your collection. On a side note regarding MS visit to Charleston. The Lauren that gave MS a tour of the Nathaniel Russel House has an instagram presence and she soo reminds me of Alexis with her wit and photography. She is a hoot and as I miss Alexis Stewart and her blog... but Laurensouthdown fills the bill. Perhaps your readers would be charmed by laurensouthdown as I have been. just don't get in my way when I hold that sign outside her office hoping she will post me on instagram some day . LOL

To the person that just discovered Ms Stewart's early TV shows......if you have time try to watch additional shows , I believe you will find the production and content are both beautifully handled and very instructional.
APM

AR that image of the Adams House kitchen. Martha Auctioned it off for Charity, really. It will take some detective work to see who won the auction and what the House looks like today. A quick google search of mine resulted in nothing for me. I woner if it has ever participated in a holiday open house. To live in a house the subject of a book and video it seems one would hate to remodel without writing a book and making a video to justify such actions. Your thoughts on the subject please.

Now that is the Martha Stewart Living that I remember. I've been a subscriber for years and each issue now is blah. The magazine is not what it used to be.

Alexis Stewart made another appearance in the pages of MSL I do believe. Was there not an image of her in a ballgown of sorts reaching to the upper shelves of her book case in her NYC terrazzo floored apartment??? I do miss her blog so glad her mixer was replaced...we did all we could to assist.

Anonymous, the image you're thinking of was published in an article called "Hard Act to Follow" from More magazine. I miss her blog as well!