Martha Stewart Living magazine is a quarter of a century old. Wow! In the magazine industry, that kind of longevity is quite a feat. I think it is a testament to the lasting quality of the editorial content and Martha's continued positioning as the lifestyle authority. There simply is not another magazine like it, despite its countless competitors and copycats. Its success, however, was never guaranteed. Over the last five years, especially, there were some doubts as to whether or not the magazine could survive as the company itself struggled to maintain afloat amid continued losses. Last year, Martha Stewart Living and Martha Stewart Weddings handed over their operating and publishing duties to Meredith Corp., which now oversees all of the advertising, distribution and marketing for Martha's magazines, leaving Martha's core team of editors to handle the content and design. The pact, signed in late 2014, was intended to cut Martha Stewart Living's publishing losses and allow a greater focus on its profitable merchandising business.

The deal seems to be working. Martha Stewart Living is still showing robust sales at the newsstand and subscriptions are still strong. This year, too, readers were treated to two special issues (there were none in 2014) which is a positive sign of financial security. A special edition of Everyday Food magazine was released last spring and a special Halloween issue came out this fall. 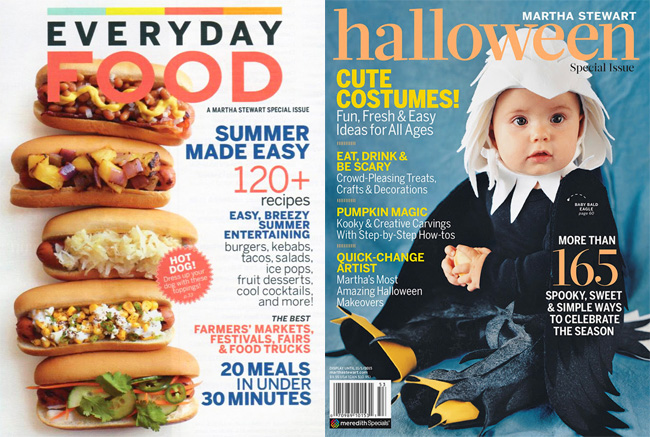 Two special issues, originally slated for 2014 release, were published in 2015 instead, after the deal with Meredith was solidified. A special, full-size Everyday Food issue and a best-of Halloween issue.

The biggest news of 2015, however, must be the sale of Martha Stewart Living Omnimedia to Sequential Brands Group Inc., which bought Martha's company for $353-million. Many people saw this as a kind of death knell for the company Martha founded in the 1990s and took public in 1997, a relinquishing of control that would have been unheard of for Martha ten years ago. Far from being a fatalistic blow, however, the purchase of MSLO by Sequential ensures its survival. There was growing evidence to suggest that Martha's company would likely not have survived another two or three years had it continued on its path of declining revenue and disappointing performance on the stock market. Martha can now use Sequential's coffers, as well as its vast influence and international reach, to leverage the company and her eponymous merchandising brands to new heights of popularity. While stock in MSLO will be dissolved (it is no longer a publicly-traded company) there is security and comfort for her customers knowing that the Martha Stewart name will continue. Late in 2015, too, Meredith revised its deal with Martha and signed a new 10-year partnership agreement that now assumes the editorial teams for both magazines and their respective websites.

For us, the consumers, this is good news. It ensures new growth for our favourite magazines and alleviates the fears that they will suddenly stop publishing - a genuine fear I personally experienced. There was a time when I felt unsure of Martha Stewart Living's future as a print publication, but those fears have now been put to rest.

Let's look at the year that was in 2015 for Martha Stewart Living... 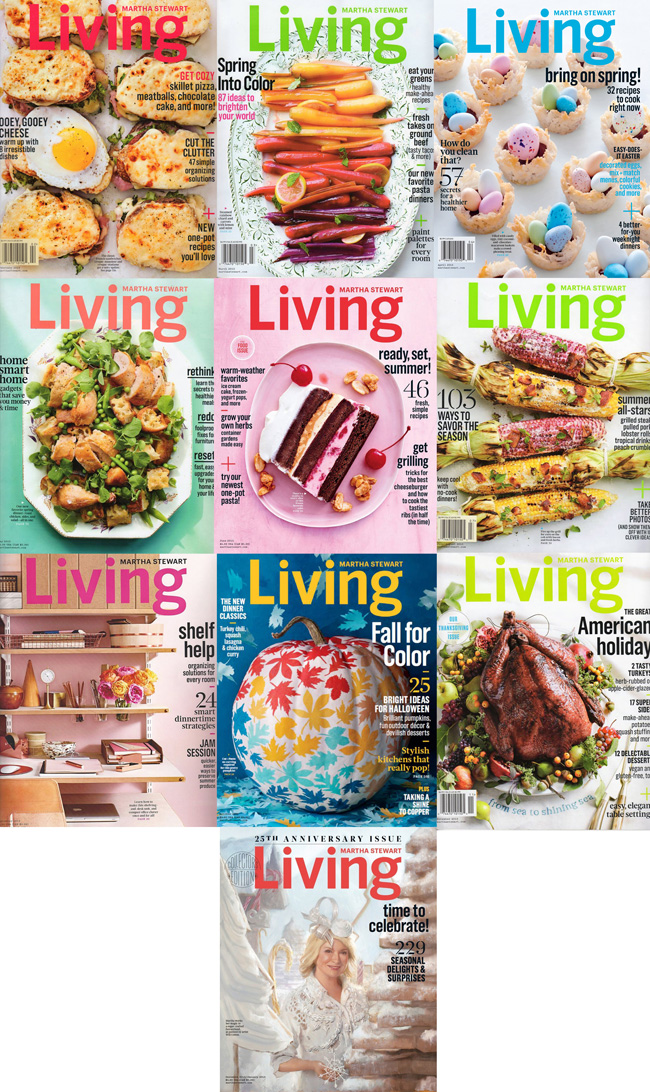 With so many changes going on at the company and Meredith Corp. adopting the magazine's primary functions, it is remarkable that the content of the magazine itself remained strong, reliable and consistent. There was very little at the magazine that changed in 2015 and there were no major staff departures or additions.

One exception was the departure of Lucinda Scala-Quinn. She stepped down as the editorial director of food and entertaining to pursue her own opportunities: the development of her "Mad Hungry" brand and a new cookbook on the way this spring. Replacing her is longtime Martha Stewart food editor, Sarah Carey.

There were also no new columns or design changes in its pages. It was a year for the editors to maintain stability with a consistent voice, look and purpose - to stay the course. I did notice quite a heavy focus on American Made content, which I think is wonderful. I love reading about the people behind the homegrown businesses that make American living more interesting and enjoyable. A front-of-book feature about American Made nominees regularly appeared in the magazine and a last-page feature on an American Made business was a staple in each issue. There is still a very heavy reliance on food content, too, which is perhaps Martha's best-selling content area. I am of two minds about this: I like reading about food but not always at the expense of Martha's other core content areas, such as crafting, gardening and decorating. 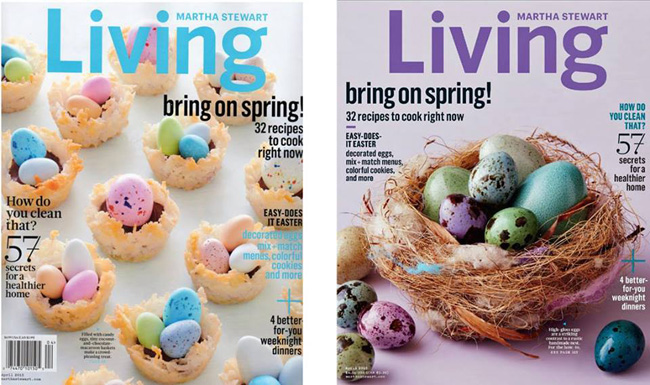 DOUBLE COVERS:
For voracious collectors, there were few significant specialties to garner in 2015 aside from the special issues mentioned above, but there were a couple of exceptions. The April issue featured two different covers: a newsstand cover (shown at left) and a subscriber cover, at right. The most notable collector's item was the December/January issue, which was the magazine's 25th anniversary issue and a self-described "Collectors Edition". It featured a painting on the cover by artist Will Cotton - the first time the magazine featured a painting on the cover - and is a must-have for anyone who is interested in collecting anniversary issues. 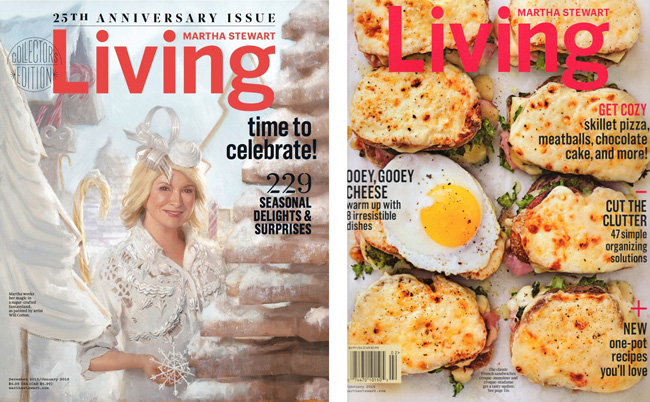 BEST AND WORST COVERS:
In terms of covers, the magazine produced one of its best and one of its worst covers in 2015. The best was the December/January cover, which was so full of imagination, whimsy and creativity - a truly joyous cover that felt new and exciting to the reader. The worst was the February issue with its rows of greasy-looking croque monsieur (and croque madame) sandwiches. I still have a difficult time looking at this cover. It just doesn't say "Martha" to me. Despite the fact that these sandwiches are actually very delicious and the photograph, on its own, is perfectly fine, the image really did not deserve a starring role on the cover of an issue traditionally devoted to Valentine's Day, which was not even mentioned on the cover, incidentally. Crafters and lovebirds who regularly turn to Martha for some crafting inspiration for the season of love were met instead with a sea of "ooey-gooey cheese." The content was actually very good in this issue (with plenty of Valentine's Day content), but the cover missed the mark. I'm so hopeful that the cover of the February issue for 2016 will be as unlike its 2015 predecessor as possible. 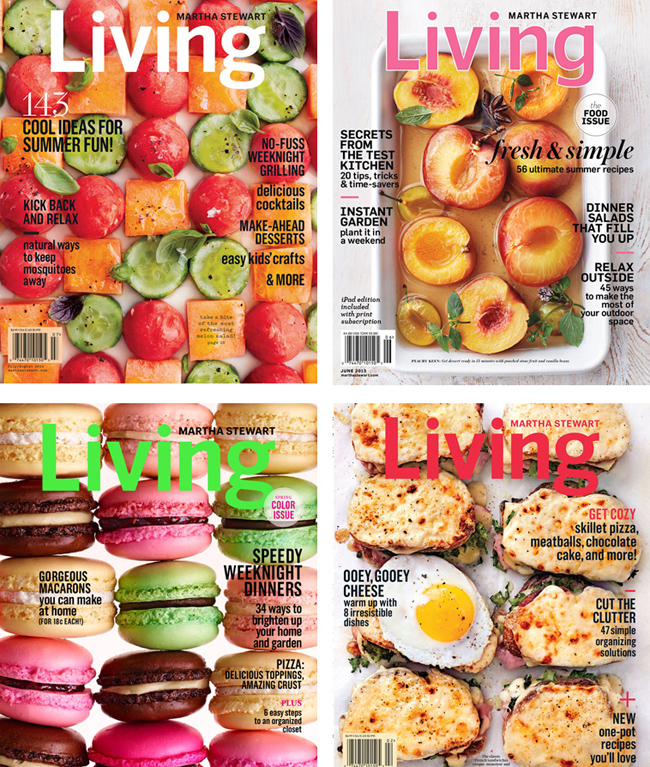 OF STACKED FOOD AND PLATTERS:
There has been a trend in recent years at Martha Stewart Living to use food on most of its covers. I am fully aware that this is a selling feature, since food magazines sell better than any other category of magazine on the stands today, but Living encompasses so much more than this. As a reader, I would love a return to a more balanced array of cover imagery that speaks to the company's vast array of content themes. In addition, I would like to see the magazine move away from imagery that depicts food in rows or stacks or piles, or tossed onto platters to appear rustic and casual. It's been exhausted, as you can see from the images above, which span several years of publication. If food is to be the visual subject matter, plate it beautifully or simplify it to the point of iconography. Make it special. Those are just some suggestions.

What are your thoughts about the year that was at Martha Stewart Living? Any favourite issues, favorite covers, constructive criticisms?  I'd love to hear!
Posted by ANDREW RITCHIE at 9:00 PM

I believe while most of the 2015 magazine are attractive they are not in anyway equal to the imaginative variation of years past ( NOT all food related)
I will remain hopeful that the MSL magazine of past years ( food/gardening/design/decorating) will reemerge in 2016.
APM

Happy New Year...may 2016 bring everyone health, happiness, and the very best for all.
This was a great review. I tend to forget what the covers were after awhile. I have to agree that the February cover was not so good. I also get tired of food being on so many covers and when it is, it should have a classier look than some in the past.
Some of them look like a bunch of 2nd. graders threw food at the wall and some stuck and some didn't. And while that certainly doesn't change the actual content of the magazine, I'd like to see it done better on the cover. I enjoy every aspect of the magazine, of course, so like to see some variety on the cover. It would be more inviting. There has to be a way to incorporate other things along with the food.

As always, Andrew, a great year in review. As news swirled about the sale of MSLO I was taken back by the amount of negativity that came forth from supporters. I always felt the sale of MSL was inevitable at some point and given the years of losses, the timing was perfect. I do have hesitation regarding Meredith assuming editorial content of the magazines as well as the websites. I'm hoping that current editorial directors and staff will be absorbed by Meredith to continue their demonstrated great work in the years to come. With everything, I take a 'wait and see' approach. I'm hopeful. As we went through the last two quarters of this past year, I saw the Living magazine return to more of what it 'used' to be with a nice balance of content, that satisfied the foodies of the world as well as crafters, gardeners, and homemakers. I was pleased with the issues this year.

I was sad to see Lucinda Scala Quinn depart the company. I always enjoyed her direction as editorial director of food. That being said, I have full confidence in Sarah Carey who has since taken over the reigns for that core content area.

From a merchandising perspective, it was nice to see (if only in a single piece) the return of a variation on "Martha's Green Glass" in a cake stand available through Macy's. It should also be noted that the holiday line had a significant expansion at the Home Depot and their catalog the Home Decorators collection. I think this is a real sign of brand strength and expertise with all things holiday.

In 2016, I'm looking forward to the return of the home office line at Staples, rebranded as "Office by Martha Stewart." I think this will likely be the only new product line introductions in the states. Sequential has already noted in their revised earnings projections, they will be focusing on international expansion of the brand. My wish for 2016? I'd like to see the Martha Pantry (or some variation thereof) return. With such a heavy focus on food, a full food line seems like a natural.

You can be sure I'll be watching carefully as we move this year!

Kenn, I had forgotten about Lucinda's departure! I'll put that in the body of the review. Regarding the editorial department st Meredith, I'm thinking it simply means that Meredith will be writhe checks to the current editorial team, which Martha spent years developing. It wasn't completely clear, though. So, we'll see! Thanks Kenn!