Martha's garden at Turkey Hill remains, to this day, one of my favourite gardens of all time. While I never had the priviledge of seeing the property in person, it was extremely well documented in her magazines and on her television shows and I feel as though I have been there. Looking through some of the photographs of the Turkey Hill property recently, I began to see some lessons emerge - guidelines and philosophies for the gardener, expert or novice, to keep in mind while planning and tending her own garden. Below are ten lessons we can all learn from the gardens at Turkey Hill. 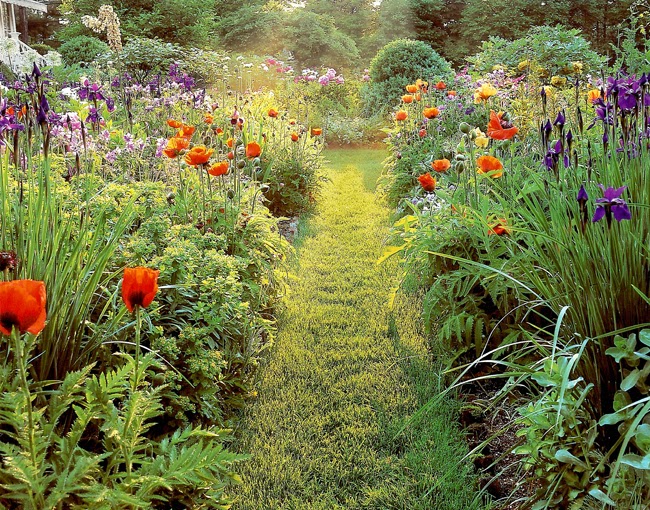 ONE: THINK LIKE A PAINTER
One of the things I've always loved about the Turkey Hill garden is how painterly it is. I think Monet would have loved to paint here, finding just the right angle from which to view the garden's beauty. Martha has said that Turkey Hill was a personal garden, one that evolved over several decades. The painterly quality comes, I think, from Martha's need to plant the things she loves the most and then finding just the right spot for those specimens. Colour and texture are considered. Varying heights and a mix of foliage keep the compositions interesting and 'negative space', such as pathways and lawns, give the eye a rest. In the photo above we see this painterly quality beautifully illustrated: a base of green dappled with brilliant pops of red and purple and pink; the light creates shadow and depth-of-field and the pathway guides the eye. 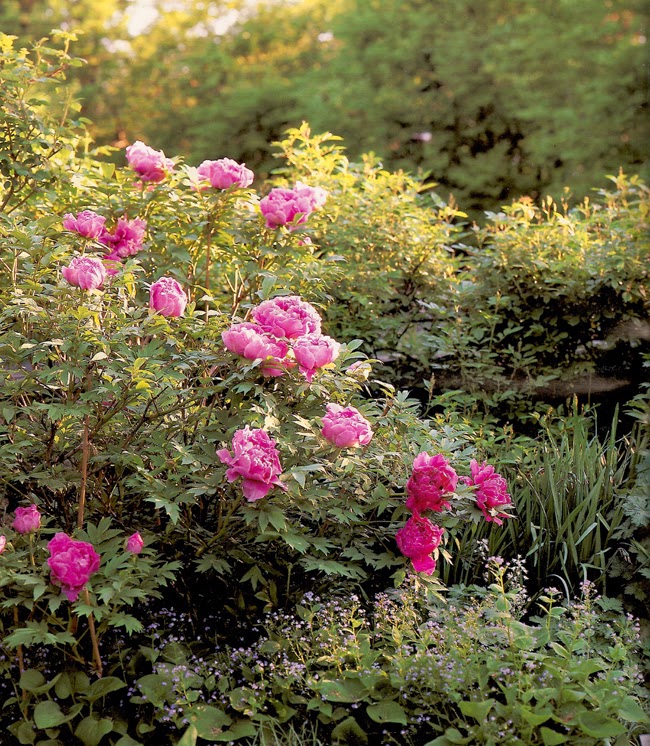 TWO: INVEST IN WHAT YOU LOVE
One of Martha's favourite flowers is the tree peony. It is not native to Connecticut. In fact, it is not native to North America at all. The tree peony originated in China, centuries ago, and was then introduced to Japan. Japanese varieties were the only ones available to the American market in the late 1970s but Martha was determined to grow them at Turkey Hill. A single specimen at the time could cost hundreds of dollars, because of their rarity. Martha was undaunted and made the investment, planting them in a mixed border in a partially-shaded location, shown above. She continued to grow tree peonies throughout her many years at Turkey Hill, adding new specimens in new colours, ensuring her garden contained examples of one of the flowers she loves the most. 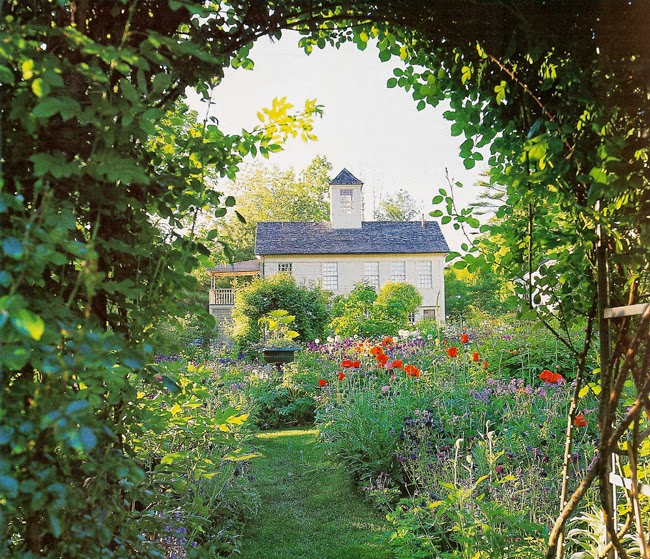 THREE: FRAME A GOOD VIEW
No matter where you stood in the garden at Turkey Hill, it seems there was always a good view. Martha designed it that way and played up the views by framing various vignettes with arbors and pergolas that were laden with climbing roses. These 'frames' not only provided gateways into new, undiscovered areas of the garden for the visiting wanderer but also ensured that what was being viewed was seen through a defined aperture. In the photograph above, Martha's studio is beautifully framed by this arching arbor. It is echoed beyond by another identical arbor, which creates a sightline and a sense of symmetry. 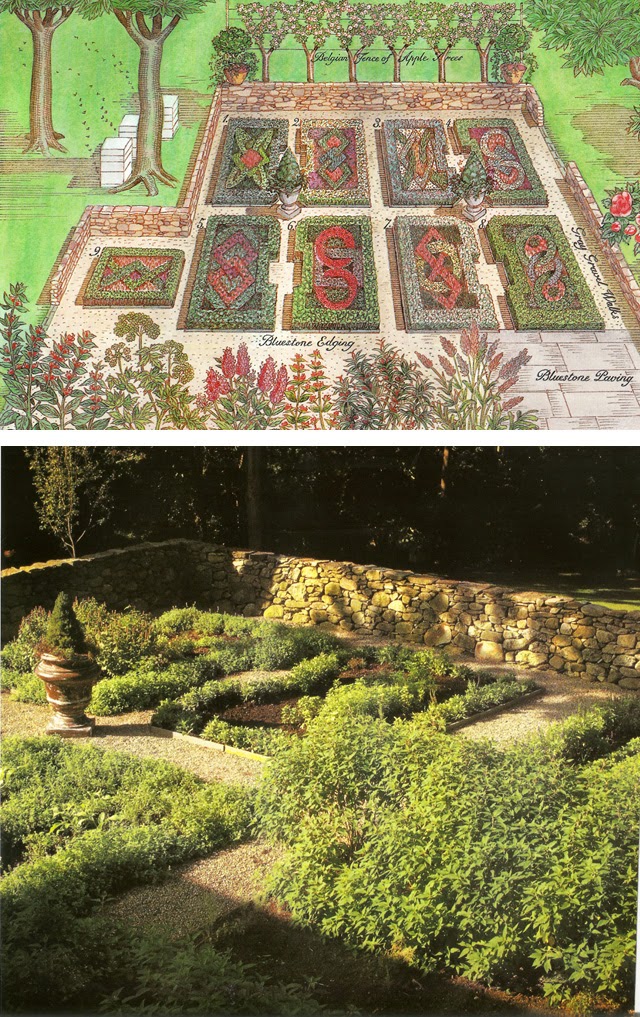 Martha designed her formal herb garden in the early 1980s. It arose out of a necessity to have herbs at the ready for her many catering projects. The design was adapted from a book called Herb Garden Design by Faith Swanson and Virginia Rady. One chapter in the book called Using Standards and Maypoles inspired Martha's layout. As you can see from the conceptual illustration of Martha's herb garden (top) it was intended to be extremely elaborate, enclosed by a stone wall. Martha did build the stone wall and planted the garden as planned. In later years, Martha conceded that the plan was too difficult to maintain and she scaled back the design to make it more streamlined and easier to care for. Martha did her research and compiled sources for inspiration. While the initial design may have been too ambitious, she tailored her expectations and made the garden workable for her needs. Never stop reading, learning or adapting. 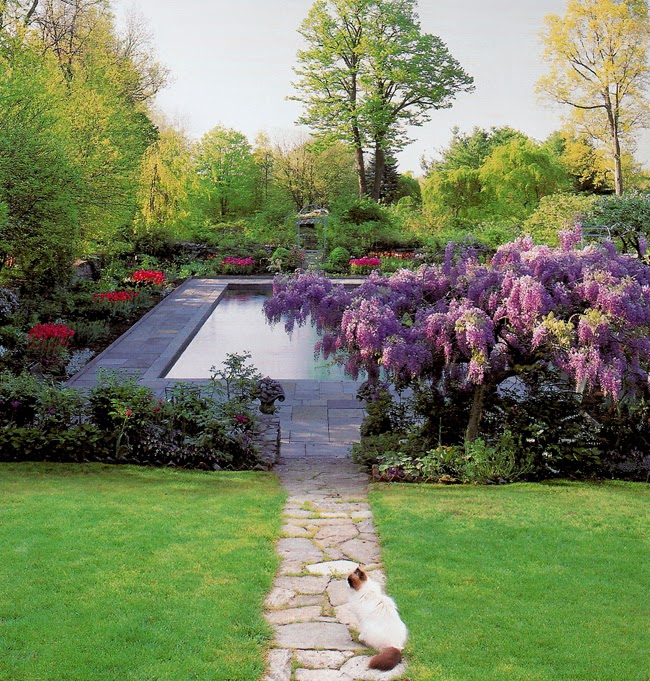 FIVE: CREATE A DESTINATION
One of the first things Martha and Andy Stewart did when they purchased Turkey Hill was to install a pool. Far from the bright blue, kidney-shaped varieties you often see in backyards, Martha's was designed to look like a pond with its interior walls and floor painted black, initially, and then a deep shade of green. Over the years Martha built the space into a destination, a kind of 'garden room' where you could escape to. The unadorned lawn and the stone pathway leading to its entrance creates the effect that one is going somewhere special. The view is also partially obscured by the wisteria, creating a sense of enclosure and privacy. 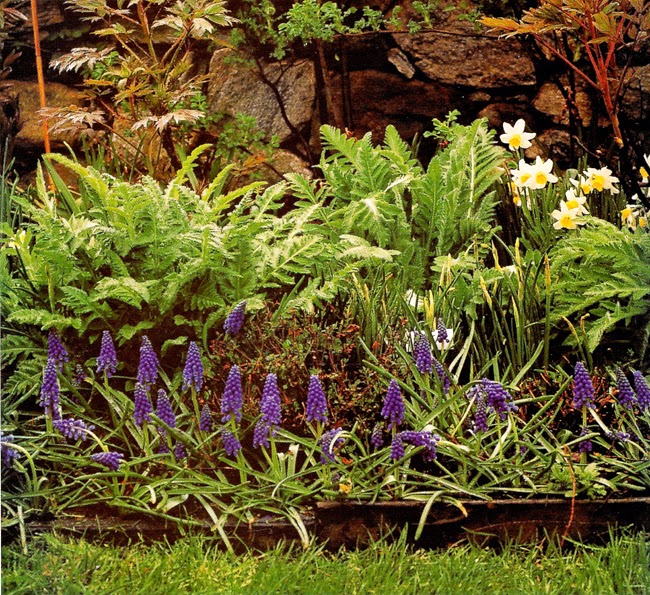 SIX: THINK SMALL
Every space on the Turkey Hill property was considered, even the smallest corners. Oftentimes, the most diminutive spaces provide the most special compositions. Here, on the opposite side of the stone wall surrounding the pool, Martha planted a border of muscari, ferns and daffodils for early spring. The border is edged with old brick. I love the graduating levels of height and the mix of textures. It is a microcosm that is filled with its own breadth of life and colour. 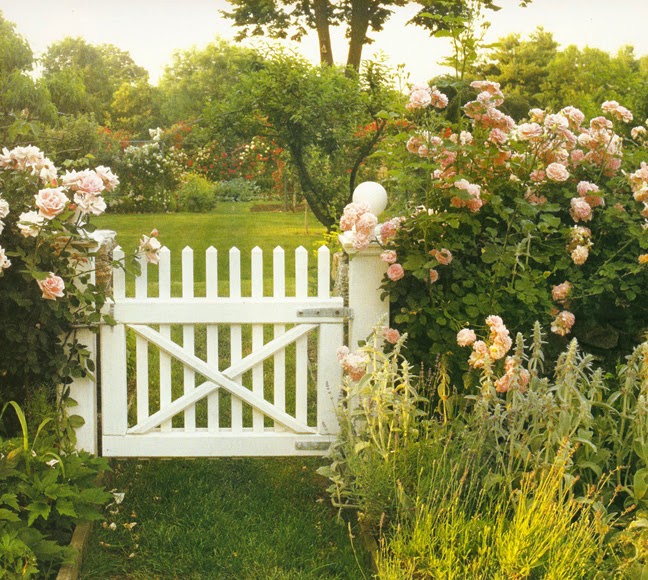 SEVEN: ADD STRUCTURE
This old white picket gate leads from the pool to the orchard beyond. Flanked by rose bushes, it offers a nod to the English countryside. This gate was eventually replaced with a more modern design but it provides a sense of linear structure to an otherwise freeform garden, much the same way the stone walls do. Martha later added many tuteurs that were painted a deep shade of gray-green and placed them throughout the garden beds. They acted as structural columns that provided linear guidance for the eye. 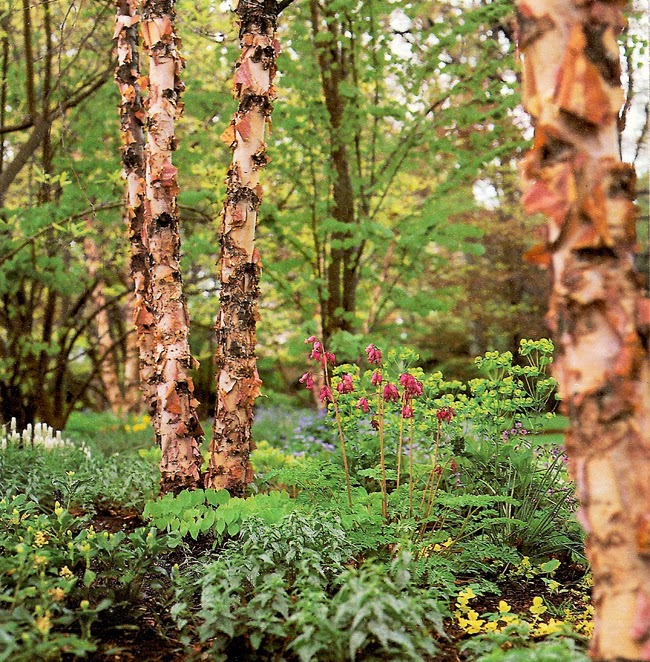 EIGHT: DISCOVER THE SHADE
It was only in the late 1980s that Martha decided to landscape the east side of her property, which was extremely shady. Martha had initially left this part of her yard as lawn but later discovered numerous shade-loving plants. Martha endeavored to create a woodland garden with a winding pathway through the trees and garden beds snaking through the tree trunks. It was one of my favourite parts of the Turkey Hill property because of its cool, sun-dappled atmosphere. Filled with ferns, hostas and other shade-loving plants, it was a verdant place with a magic all its own. 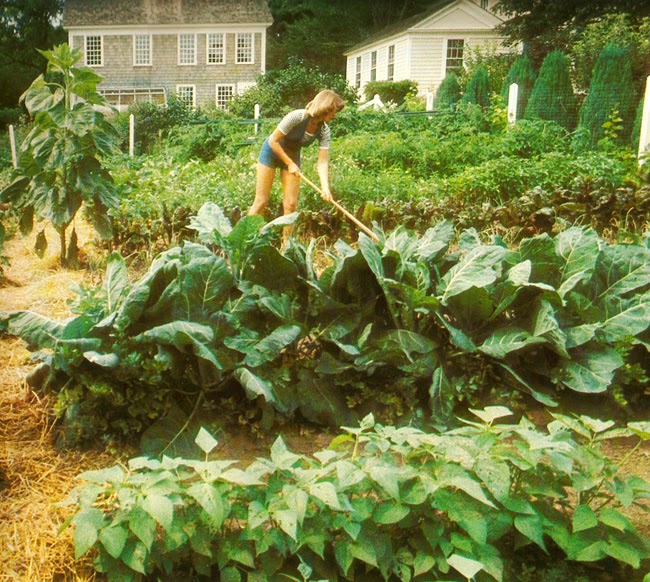 NINE: PLANT FOR A HARVEST
Not every gardener will want to have a vegetable garden, but how nice it must be to step outside your kitchen door and harvest your own lettuce, tomatoes, cuccumbers, carrots and kale. Martha is shown in the photo, above, tilling the vegetable garden at Turkey Hill in the early 1970s. A vegetable garden was essential for Martha's catering business and she grew everything she needed, including asparagus, brussels sprouts, numerous varieties of squash, various leafy-green vegetables and much more. There was also an orchard on the property with apples, pears and plums, and a berry-bush grove where she grew raspberries, blackberries and strawberries. 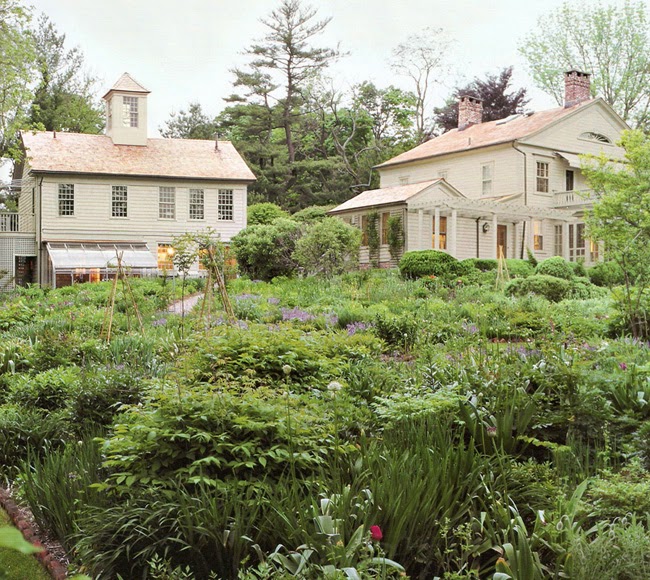 TEN: ROTATE YOUR CROPS
The photo above, taken in 2003, is one of the last photographs of Turkey Hill under Martha's stewardship. As you can see, Martha's original vegetable garden, which was initially in this location and shown in the photo prior to this one, is no longer there. Martha moved the vegetable garden to another part of the property and replanted this area with a vast cutting garden, shown here. Rotating your crops reinvigorates the soil and curtails the growth of microscopic pathogens and parasites. The maturity of the Turkey Hill gardens meant that crop rotation was necessary to keep the soil rich and fertile. The results, as you can see, were highly successful!
Posted by ANDREW RITCHIE at 12:28 PM

One of the most beautiful gardens, I hope that one day we will both visit this garden Andrew. Thank you Andrew for the beautiful and very inspiring ten lesson. Wish you a wonderful weekend xx

One of my most favorite posts of ALL TIME. So beautiful!

Kenn, it will forever be the Martha Museum that got away... :-)

I am transported back to Westport. Thanks for this.

This post is proof of the incredible talent Ms Stewart has to bring beauty in to our lives.
I hope some how this fact is not loss by the general public.
APM

Martha, Thank You For Staying The Course!!!