Martha Stewart Living: The Year That Was

I almost didn't do an annual review this year. Not because I didn't want to, I just wasn't sure there was that much to say about the year that was in 2016 for Martha Stewart Living. The issues were consistently good but nothing really jumped out as being utterly inspiring - or completely disappointing. Three things are worth noting, however:

1. 2016 marked the first complete year that MSL was managed by Meredith Corp. and Sequential Brands.

2. Early in 2016 a round of layoffs in both the editorial and advertising departments saw the departures of some very familiar faces, including stylist Ayesha Patel and crafts editor Marcie McGoldrick.

3. Eric Pike, the longtime creative director and editor-in-chief (largely responsible for giving the magazine its soul) stepped down after the March issue, succeeded by former Weddings editor Elizabeth Graves, who began her position as editor-in-chief with the April issue. 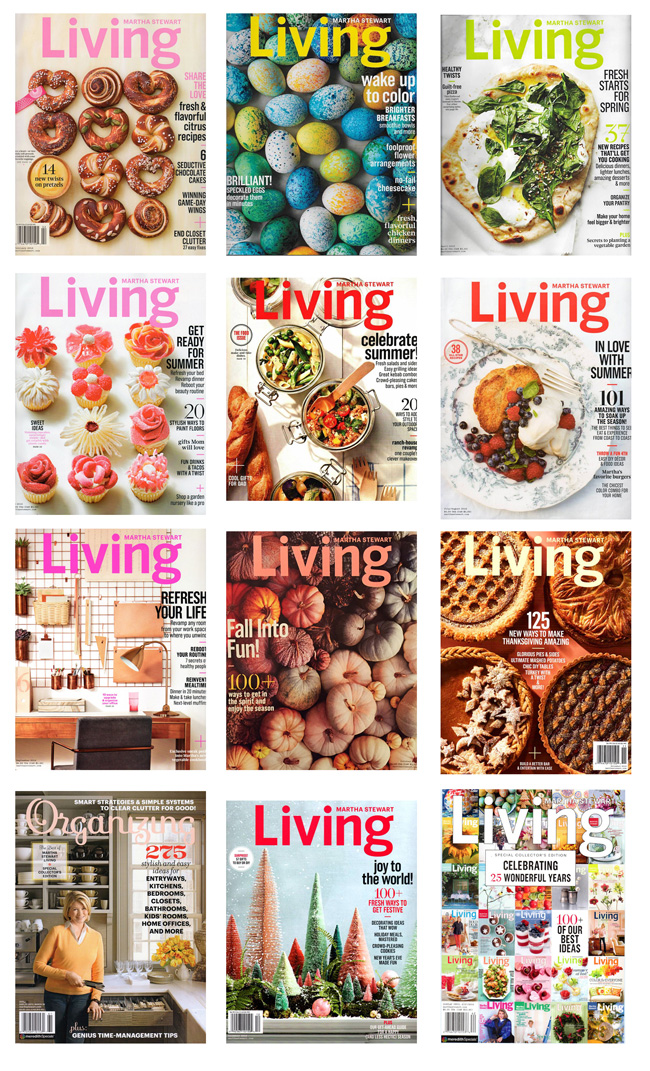 An assembly of the covers of 2016. There were no hideous covers (February, 2015, still haunts me) but there were some very pretty ones. My favourite cover is November: I love the pies and the symmetry; it's modern-traditional. Love it. December is also really nice: kitsch with a classy twist.

The issues of 2016 were similar in style, content and volume to the issues from the year prior. Nothing really changed: no new columns, nothing taken away. There were two special issues: one on organizing and one that celebrated the magazine's 25th anniversary. For collectors, both are worth having.

The general consensus among many readers in 2016 (according to comments left here on the blog and on the Martha Moments Facebook group) seemed to be that the magazine is "okay" but that it does not give them the same enjoyment as it once did.

I would put myself in this category as well. I definitely enjoy receiving the magazine as a subscriber and I do enjoy quite a bit of the content. For me, though, it's the overall feel of the magazine that has changed. I no longer feel it has very much that differentiates itself from other lifestyle magazines.

I do feel that it was the people who gave the magazine its soul, starting at the top with Martha. It was always Martha's intent to phase herself out of the magazine's pages as time went on, something that is becoming increasingly apparent. The effect that has, however, is the subtle disassembly of an image that gave the magazine so much of its strength and personal vision. Aside from her opening column (which I always read first!) there isn't much "Martha" in the magazine anymore - neither literally, nor stylistically.

Many of the faces we had been groomed to recognize over the years have also left: Lucinda Scala-Quinn, Eric Pike, Margaret Roach, Gael Towey - stewards of the brand who really gave "Martha" the look and feel that so many of us identified with.

If you don't see yourself or the qualities you're interested in within the magazine's pages, you will seek it out elsewhere.

Now that the Martha Stewart editorial staff has been reduced to its barest minimum under the controlling interests of a larger corporation (Sequential) it was to be expected that the magazine would change.

I still do feel the content is strong and consistent from issue to issue. In every issue I read there is always something - a kernel of knowledge, an inspiring photo, the story of a maker or designer - that keeps me interested in coming back to its pages.

I've learned to let my love of the magazine - and the brand - relax a bit, which is why I no longer blog as much as I used to. It will be what it will be and we can either decide to tag along for the ride or find something else to inspire us.

And since we all know that Martha is irreplaceable, we had better fasten our seat belts for the rest of the journey!
Posted by ANDREW RITCHIE at 10:30 AM

Good day Andrew,
I agree with your comments.......but!
I do feel that a number of the MSL 2016 covers did not equal the exceptional photography within the magazine ( with the March cover truly not attractive or appetizing ).
Yes, Ms Stewart's impute can not be replaced, but by eliminating her "partners" who worked with her in creating the early magazine ( who left weather by their choice or recently by new management) the exceptional past feel/contact of MSL has been deluded to just slightly better then it competitors.
It may never be exactly the same, but it can improve and continue to be a vital link with Ms Stewart's brand.
Happy New Year !
APM

For the first time in 20+ years, I did not renew my subscription to Living. As silly as it may seem, I actually struggled with the decision to not renew. In the end, my decision wasn't about not enjoying it; rather about receiving it at all! Since Meredith assumed operations of the magazine, I rarely received it in the usual 1-2 weeks in advance of the newsstand. It was one of the 'perks' of being a subscriber (so I thought..). Now, I can find it locally, at least a week in advance. I readily recognize, I'm not a very patient person.

Since Eric's departure, the magazine lacks anything truly special. I agree, there is still 'good' content - but there is nothing that makes me return to the pages again and again. When I look for inspiration, I go to my 25 year library of previous issues; not current issues.

If only current ownership saw value in reviving this extension of the brand.. I think they would be greatly rewarded with the investment.

I too have "relaxed" with the brand. It is what it is. But please.. don't get me started on the Martha/Snoop Dog thing... it pretty much sent me over the edge.

Thanks for both of your comments! I agree with both of you. It is still a very good magazine - by all accounts - it is just not the BEST magazine anymore.

If the subscription rate was not so cheap now because they are part of a major media company I would no longer buy it. There are whole issues I can do without but I figure the price covers the newsstand price of two issues. So if I like more than two then it is a buy. I love how you reviewed the year. I am glad I kept all my issues that focused on holidays. I have many holiday traditions from the old issues but have not picked up any from the new ones. The content is just not there anymore. I am enjoying Williams Sonoma more and have shopped Macy's much less. I liked the cover of December for example but there was not detailed or sourced instruction on how to create the look on your own, which is why I used to love the magazine. The designers are talented but it did not translate outside of the pages of a photo shoot. They were not things that would work in a home. I think the soul has left because Martha has moved on. She may end up sharing a great third act at some point but I think she likes living the big life and she deserves it. However, I do not use her as a go to anymore for entertaining or holidays.