Martha Stewart and Snoop Dogg became fast friends several years ago, doing several segments together on Martha's TV show. Now they will both be starring together in a new reality show on VH1 tentatively called 'Martha's & Snoop's Dinner Party.' Details about the show are scarce, but reports suggest it will be unscripted and will document a series of dinner parties hosted by the unlikely pair. Guests will include some of their celebrity friends. The show debuts this fall on VH1. The dynamic between these two is pretty hilarious, so I'm actually quite eager to see it! 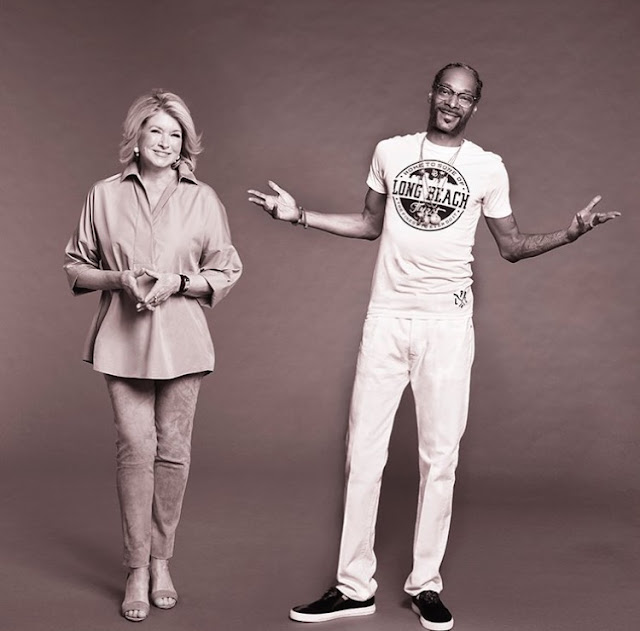 Posted by ANDREW RITCHIE at 8:21 AM

I doubt I would be the target audience, as I can't believe is will be the level of style and grace I expect from Ms Stuart. Although on second thought, what demographic would this play to on VH1......middle aged, foodie, rapper, potheads ?
APM

Actually really excited to watch this but not sure how the ratings will be. Wonder who the guests will be too

Really??? How different and unusual... I also would not be part of the target audience. Maybe it's an effort to draw in the younger crowd. Harmless, at best.

Does the Creative Arts agency have these two as Clients? Also, SD was on FAMILY FEUD!!!!
What does that say about bills to pay??? Good Luck oh to coin a phrase, That's Etertainment it worked for Ozzy osbourne wait he be on a new show with his son Jack

Hi Andrew,
This sounds lovely, would like to see them both together. I hope we will be able to watch the show from our side of the world
Best wishes xoxo

I love all things Martha - but this relationship stopped me in my tracks. What is she doing? I've heard Snoop on Howard Stern over the years - and all he talked about was whores and drugs. He bragged about having a 'stable' of whores and sending them "out" to make money for him. How he'd hit these women with a shoe if they didn't listen to him. It was vile. He is all about drugs. I can hardly understand what he is saying - mumbling etc. I am dumbfounded that a woman who graduated from Barnard, ostensibly a feminist - with all that she has accomplished - would hook up with this noodnik. I don't get it. It will be the first Martha project since 1982 that I will ignore.

I've watched all the episodes and they have been renewed for a second season! This gives Martha a chance to play up her playful side and Snoop isn't too objectionable on the show either. The show replays on MTV as well.

You can tell that if things start to go off the rails, Martha rains it back in. But she seems to be having fun and reaching a new audience. She has always interacted well (although sometimes awkwardly) with Snoop and other rappers. Remember how great she was with Snoop on the roast of Justin Beiber?