As I've stated here before, cooking is not my strong suit. It's not that I dislike cooking, it's that I just don't have that "gift" that an authentic home cook has: that sense of ingenuity and creative composition in the kitchen, and the willingness to experiment. I'm afraid I will always need a recipe, which means I will always need cookbooks. I have many cookbooks already. I love them. Some I simply read for the pleasure of reading and some I use, but all of them impart a sense of comfort.

This fall there are a lot of new cookbooks on the way, including a new one from Martha called "Appetizers," which is due out on September 15th. I've selected eight of the cookbooks I am most looking forward to. 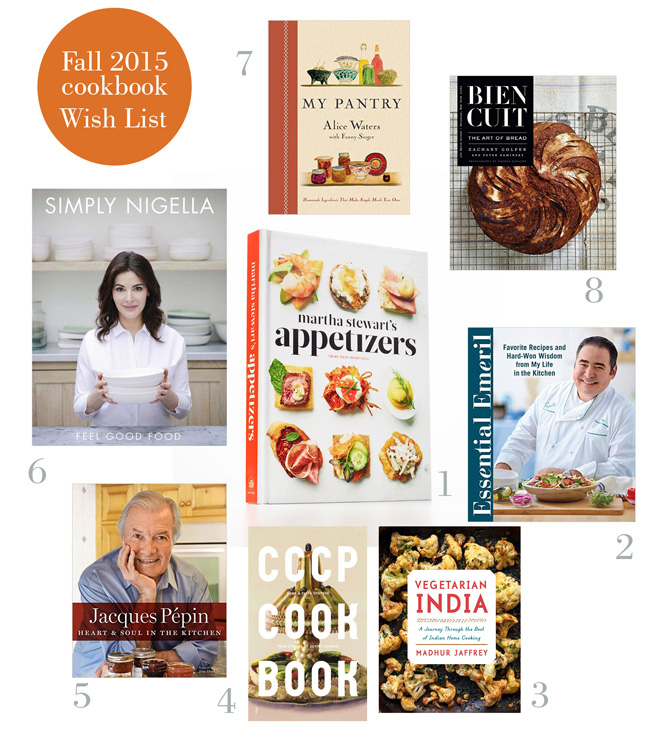 1. Martha Stewart's Appetizers
Obviously, every fan of Martha's will have to get this one. It is hardcover and features 200 recipes for dips, spreads, snacks, small plates and other hors d'oeuvres. There is also a chapter on cocktails. I like that the book is hardcover, too. I've always been a fan of hardcover cookbooks. Martha is planning a few book signings for Appetizers, so stay tuned for any updates. September 8, 2015

2. Essential Emeril
I don't have any cookbooks by Emeril Lagasse, but the longtime chef and restaurant owner must be good! Martha endorses him whole-heartedly and this book promises to deliver a 'back to basics' approach to cooking with a more intimate look at Emeril's life as a dad and family man. Fans will delight in Emeril's anecdotes revealing the inspiration behind each recipe, with appearances from A-list names - Mario Batali, Roy Choi, and Nobu Matsuhira, to name a few - alongside family members and early influences such as Julia Child and Charlie Trotter. October 6, 2015

3. Vegetarian India
I grew up watching Madhur Jaffrey. After school, her program was always the one I would watch and I'm sure it was an early influence for my adventurous tastebuds. Indian food is among my favourite types of cuisine and vegetarian cooking (and eating) has become an increasingly important aspect of my life. My husband is vegan (partially by choice and partially by dietary necessity) so cooking vegetables in interesting ways is essential. With more than two hundred recipes, beautifully illustrated throughout, and including personal photographs from Jaffrey’s own travels through India, the book promises to be a kitchen essential for vegetable enthusiasts and home cooks everywhere. October 27, 2015

4. CCCP Cookbook
This is a book I will read more for historical insight than anything else. As the Soviet Union struggled along the path to communism, food shortages were commonplace, and both Party authorities and Soviet citizens had to apply every ounce of ingenuity to maximize often-inadequate resources. The stories and recipes contained in the CCCP Cook Book reflect these turbulent times: from basic subsistence meals consumed by the average citizen (like okroshka, a cold soup made with the fermented beverage kvass) to extravagant banquets held by the political elite (suckling pig with buckwheat), with a scattering of classics (beef stroganoff) in between. Each recipe is introduced with a historical story or anecdote from the period, and illustrated using images sourced from original Soviet recipe books collected by the authors, food historians Olga and Pavel Syutkin. It promises to be a great read for any food historian. September 29, 2015

5. Heart & Soul in the Kitchen
Longtime chef and television host Jacques Pepin, a personal friend of Martha's, gives us an intimate look at the food he prepares for his family and friends at home. Among the 200 recipes are the simple dinners that Jacques prepares for his wife, elegant dinners for small gatherings and dishes for outdoor parties and barbecues. Jacques will appear with Martha at the Newport Mansions Wine & Food Festival on September 27th in Rhode Island for a cooking demonstration. Martha will be signing copies of her new book, Appetizers. Click here to read more. October 6, 2015

6. Simply Nigella
Say what you will about Nigella Lawson, she is an unabashed food lover and her passion for food is what I love most about her. She loves to eat. She loves flavour and simplicity in the kitchen. She also loves to write and her style of writing is always engaging and inspiring. Simply Nigella taps into the rhythms of our cooking lives, with recipes that are uncomplicated, relaxed and yet always satisfying. November 3, 2015

7. My Pantry
In her most intimate and compelling cookbook yet, Alice invites readers to step not into the kitchen at Chez Panisse, but into her own, sharing how she shops, stores, and prepares the pantry staples and preserves that form the core of her daily meals.  Ranging from essentials like homemade chicken stock, red wine vinegar, and tomato sauce to the unique artisanal provisions that embody Alice’s unadorned yet delightful cooking style, she shows how she injects even simple meals with nuanced flavor and seasonal touches year-round. The book is illustrated by her daughter, Fanny. September 15, 2015

8. Bien Cuit: The Art of Bread
The new Martha Stewart Cafe carries pastries by Bien Cuit, one of New York's finest patisseries, and one of Martha's personal favourites. In his latest book, The Art of Bread, Chef Zachary Golper continues his ongoing quest to coax maximum flavour out of one of the world's oldest and simplest recipes. The book shares fifty bread recipes that span the baking spectrum from rolls and quick breads to his famous 24-day sourdough starter. This book is an homage to tradition, but also to invention. November 17, 2015
Posted by ANDREW RITCHIE at 10:08 AM

So now I'm thinking you need more bookcases - what with last 2 posts! They are all such beautiful books and I love to be able to display books like these. I LOVE to cook and I also have many cookbooks. I'm lucky enough to have a great place in my kitchen island to display them...it was my husbands idea when we redid our kitchen and I'm so glad that we did it. Plus it makes them so accessible and reminds you what recipes you've already used and those you want to try. Hopefully gift-giving family and friends will remember these books at the holidays and make sure that you get some of the titles...wouldn't that be great?

Yes, that would be great! And, yes, I do need more bookshelves! (Never enough!) I too keep my cookbooks in the kitchen. There is a cupboard devoted to them. A few of these will be making it on to my Christmas list this year, for sure!