Double Covers for the April Issue

It's been a while since Martha Stewart Living magazine produced two different covers for its flagship magazine. The April 2015 issue has two covers: one for subscribers (shown on the right) and one for the newsstands. The April issue officially hits newsstands on Monday, but many outlets are already displaying it. The cover promises spring-cleaning tips, plenty of Easter ideas for crafts, cooking and entertaining, plus healthy weeknight dinners. Which cover do you prefer? 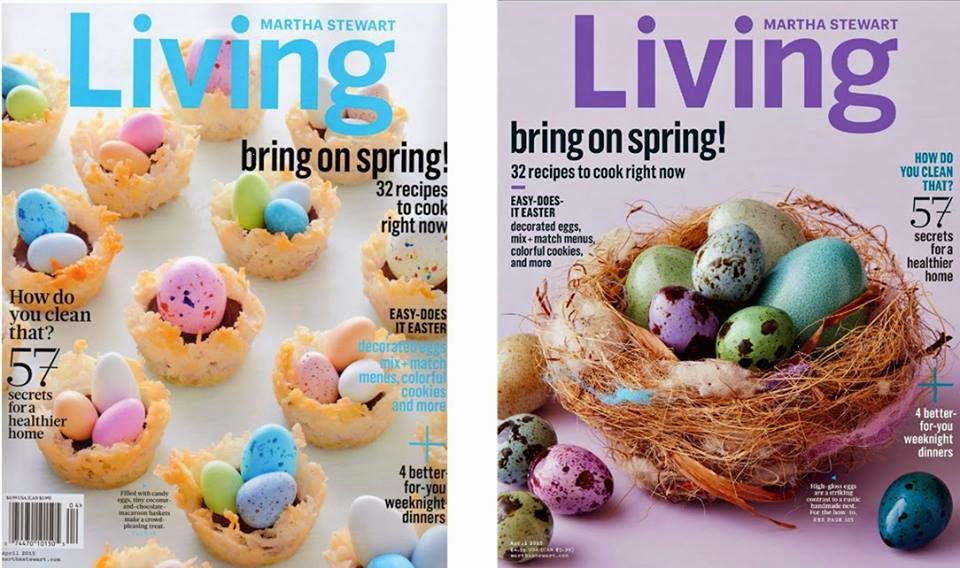 I subscribe and received the purple cover and love it! Pretty good issue. One thing I just noticed it seemed in more of the text they constantly refer to Martha does this.... or when Martha....
Is it just me or are they trying to put more of her presence back in.
I would love to see her back on the covers each month!

The subscriber cover! The news stand cover reminds me of Family Circle.

I'm a subscriber and just received the latest issue. I like my cover better than the newsstand one . It's more colorful and interesting.

The nest cover on the right is my favorite. Some may find it too similar to past April issues , but I believe it is solid design!
APM

What has happened to the digital issue? It is now a poor quality scan of the paper issue with no interactive content and when you zoom in on text or photos they are fuzzy and blurred. It is no longer a pleasure to read I am afraid. What are they thinking? If this carries on they will lose many digital readers I am sure. Substandard products are not what we expect from Martha.

Hi Andrew,I downloaded my digital issue, surprisingly I go a notification saying they stoped the videos and audios for the digital issues beginning this issue April 😟

What is being commented re the digital magazine is 100% counter intuitive on how to maintain/secure a loyal readership.
For a corperation who's founder fosters hi tech, this makes little sense.
APM

It is clearly being done because it is cheaper. The contents page is not interactive and there are no links to the recipes - you have to keep scrolling backwards and forwards. What is the point of a digital issue if it offers nothing different to the paper copy?

I'm scratching my head at the recent cover choices. The right is a winner, but the left is... just ugly. It'd be interesting to know whether the recent covers really do sell better. I'd pick the one on the right but most likely leave the left one on the newsstand.

I really do wonder where they are going with this, and look forward to your recap of covers at the end of the year to see if we can make sense of the development.

Just downloaded the new issue and noticed a few things: the message ending interactive features, no reader feedback survey at the end, image quality reduced (to save on space?) which resulted in having to pinch/zoom to read any text. Could live with the other changes, but the clumpy quality of the text was annoying. Wish there was more garden content! Sorry for all the complaints... The cover was pretty, as were the recipe photos.