The February Issue is Quite Good!

Despite my disdain for the image that was chosen for the cover of the February, 2015, issue of Martha Stewart Living (read more here) the issue itself is actually quite good. My copy arrived in the mail on Friday and I've spent a few hours with it on this gloomy Sunday. There is much to enjoy in its pages, such as the decorating article called "Nooks and Cubbies", which has great instructions on how to build a multipurpose ottoman with storage nooks. There are plenty of inspiring photos that make me want more nooks and cubbies in my apartment! The article on dates ("A Date in the Desert") is a great portrait of a California date farmer named Robert Lower, filled with excellent ways to use these fruits in cooking. The American Made feature ("Hatching a Plan") about the women behind the Brooklyn design firm Egg Collective was really interesting and inspiring. I liked Martha's column about Tomas Joseph and his love of pho (pronounced "fuh" - never knew that!) and some of the Valentine's Day craft ideas were very clever and pretty.

Why the editors chose a photo of croque-monsieur sandwiches for the cover is still perplexing to me, especially considering the plethora of Valentine's Day ideas inside the magazine. You would never know that from the cover, which does not even mention Valentine's Day. I'm still scratching my head about the decision making process behind this choice, actually.

MY VERSION OF THE FEBRUARY COVER:
Because I like to play with visuals, I had the audacity to rethink and recreate the cover using an image by Anna Williams of lemon-date bars with X and O patterns stenciled in confectioner's sugar, which appears on the splash page (page 67) in the issue. It think it's on-brand. It's still food-centric (if that's what the editors are going for these days, then it meets that requirement) and it alludes to Valentine's Day without being overtly kitschy about it. It think the image is clean, enticing and whimsical. What do you guys think about having this image as the cover instead of the ''ooey gooey'' cheese cover? 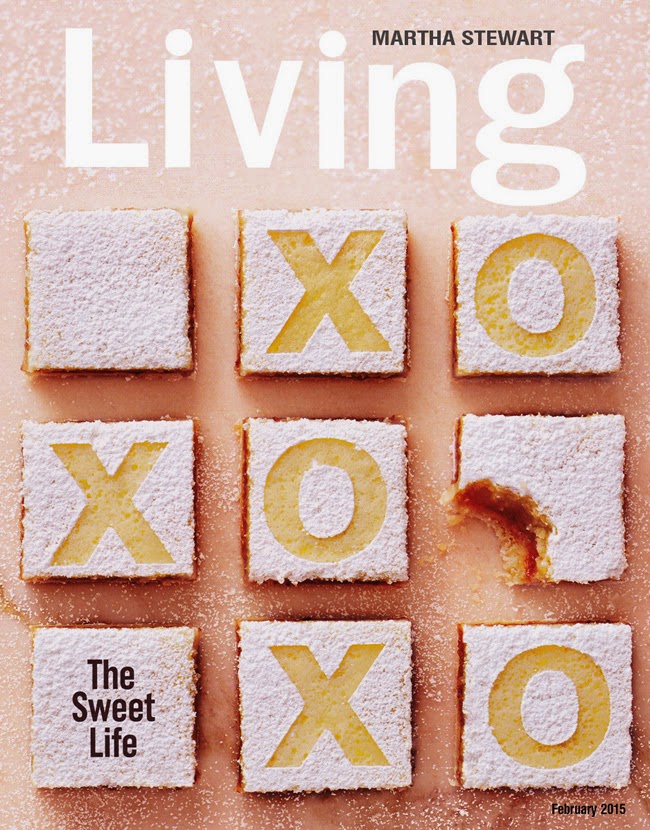 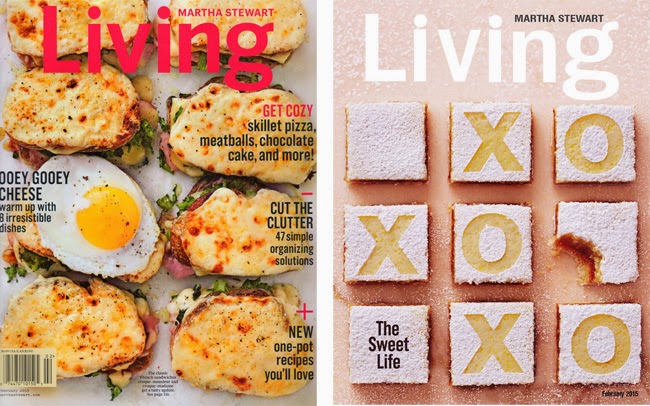 I have been totally disappointed in the magazines lately. I bought a bunch of vintage magazines on ebay and there was just so much more in the old ones! I say bring back the old format! The photo's, articles, layouts, were just better. I had a horrible experience with the customer service department last year. I used a gift-card someone had given me to renew my subscription and after a few months I stopped getting the magazines. I called customer service and was told you stopped getting the magazines for non-payment. I emailed my receipt and everything and I never could get anybody to contact me back. A total disappointment! I was a bit worried around Halloween. I was shopping in Michael's and I couldn't find any Martha Halloween stuff, I asked the manager she replied they were phasing out the Martha stuff. Like you said I am worried about the brand and I want it to succeed.

I'll take your cover design please. Every time I look at my February issue, I just shake my head and wonder why...

I must say that while in the airport looking to grab a magazine for the plane, those globs of cheese were a shock amongst the other shelter covers! If they keep this up, vendors should just display it in the food section.
I did think this issue ok also. I long for more photo spreads of Martha's homes....I guess viewing the evolution of Turkey Hill in the old days spoiled me for something that is over as far as today's editors and direction of the company are concerned.....
Your blog is always enjoyable!

Your cover is absolutely fantastic! Props to you for your clever put together. I'm almost wanting to print it out and tape it on the current February cover haha. Good job! I'm now very curious and excited to see what March will bring.

To be honest, when I received the FEB issue its size seemed more like a panphlet then a Magazine issue. After reviewing it I do agree with Andrew .....the content is strong.
Let's hope this indicates MSL can pull things together and make this magazine and corporation prosper.
APM
PS Andrew excellent cover design

I totally agree with you Andrew, I downloaded my digital issue and I love the content of the magazine beautiful, Inspiring and more videos, Love. Yes yes to your version of the cover, love it

Not a doubt, your version is far superior.

I love your interpretation of Martha's covers! I agree that we have had too many food covers, but yours was SO creative!

I enjoy your blog immensely!

Yours I'd buy, but the actual cover is horrible with that red against the cheese. It looks like a pretty mediocre food magazine.
I usually buy issues when travelling. Imagine sitting with that cover on a bumpy bus or plane ride.

You version is better x 100. Yours sums up all that was great about MSL: classic with a contemporary twist, traditional and chic at the same time. I am now officially annoyed/sad that yours *isn't* the actual cover.

Oh my gosh, your cover is so much better! It's fun, it's playful, it reminds me of the older Martha magazines before they... changed.