This month, Martha Stewart Living relaunches its extensive line of patio and outdoor furniture, now available exclusively at The Home Depot. With 16 collections, Martha has reintroduced herself to the outdoor furniture market through The Home Depot. Please click here to shop the collections.  It was also this month - 15 years ago, in 1999 - that Martha introduced her first patio furniture lines with Kmart as part of the much-lauded and deeply-missed Everyday brand. The patio collections were part of a larger class segment that the company introduced at Kmart under the general heading of Martha Stewart Everyday Garden. This new category also included gardening tools, planters and seed packets but was dominated by the beautiful outdoor furniture lines. When I asked my good friend Kenn if he had any information about Martha's debut patio furniture collections at Kmart he wasted little time scanning every single page of the original Martha Stewart Everyday Garden catalog, some of which you will see below.  It gives me great pleasure to showcase some examples here as part of the Martha Moments archive. Thank you Kenn, for helping me with this post! 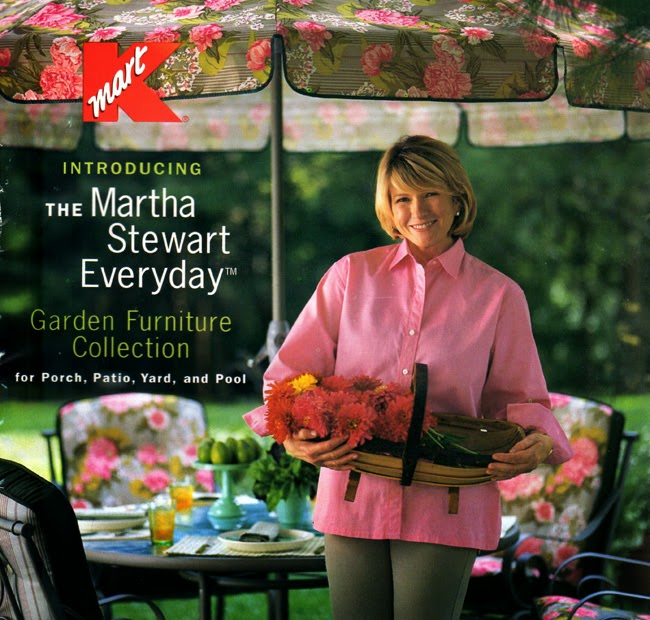 This is the cover of the original catalog that introduced the first Martha Stewart patio collections. In addition to the outdoor furniture lines with Kmart, Martha also sold outdoor furniture collections through her own catalog, Martha by Mail, although they were not as extensive. 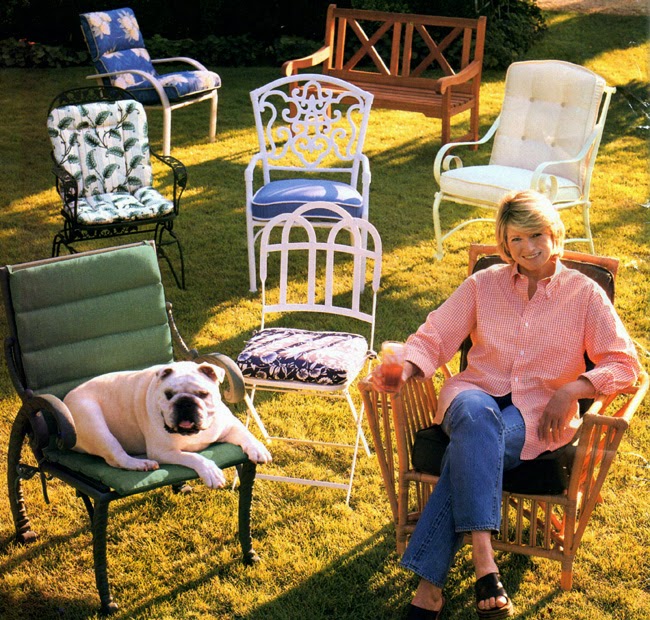 Here is Martha sitting in a Key West chair, accompanied by one of Alexis Stewart's bulldogs. She is surrounded by chairs from some of the other collections, each of which was inspired by the design essence of a great North American city or region, from Charleston, North Carolina, to Victoria, British Columbia, in Canada. Many of the pieces were fashioned after Martha's own American garden furniture, much of which is antique. The Martha Stewart designs combined the beauty of traditional decorative detail with the functionality and comfort required by the modern homeowner, which made them instantly popular. The collections included dining sets, chaise lounges, seating sets, swings, gliders, hammocks and benches. The patterns featured on the cushions and umbrellas of the furniture were also designed by MSLO and were exclusive to the Kmart line. Many of the cushions were weather-, fade- and mildew-resistant. 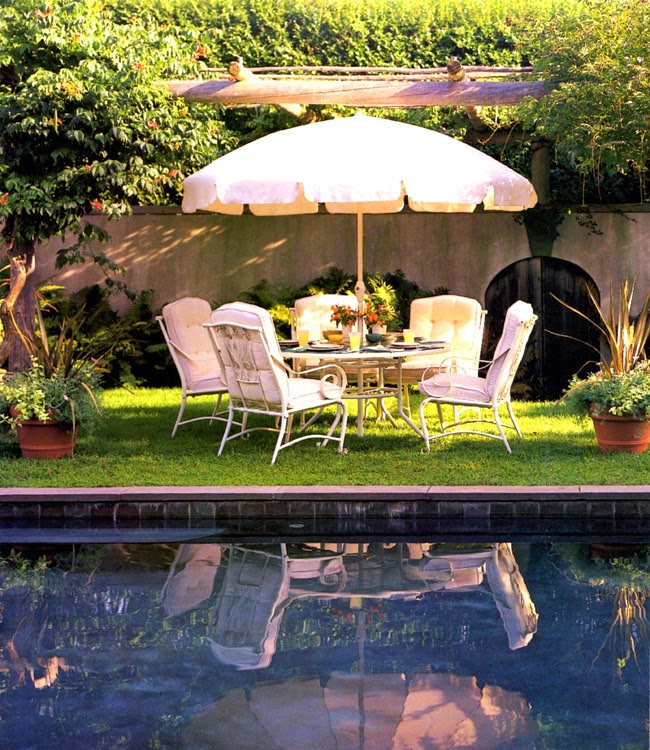 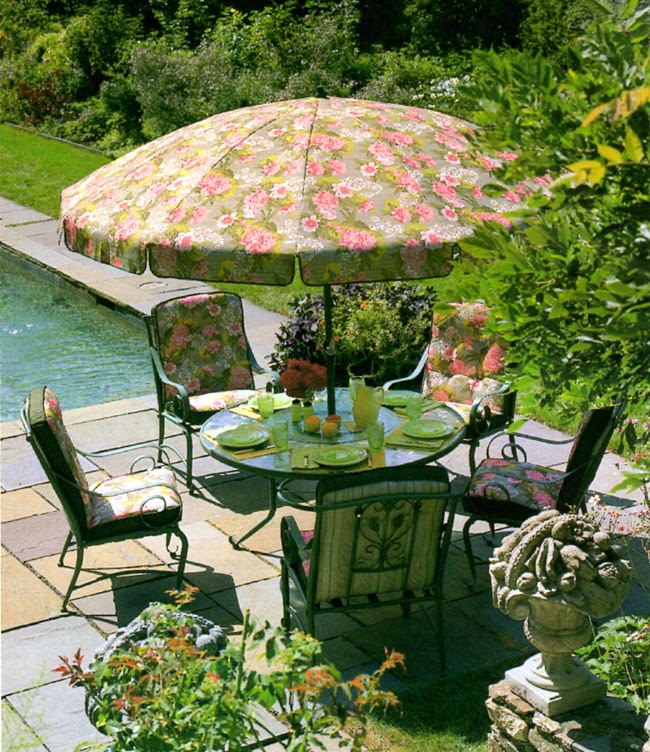 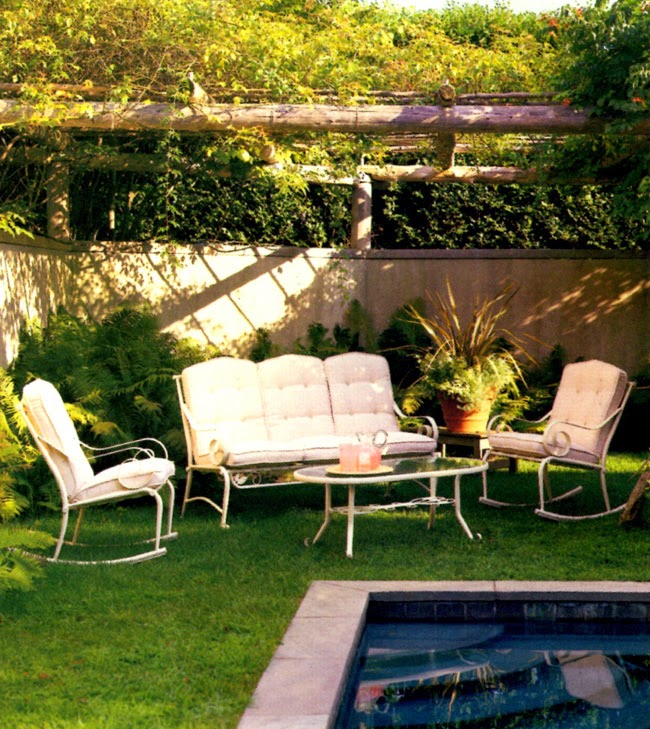 TOP THREE PHOTOS: This is the Victoria collection, named after the city of Victoria, British Columbia, in Canada. The collection featured powder-coated steel frames to resist scratching, chipping and fading. This collection was sold regionally (not available in all stores) and came in two colours: ivory and dark green. Upholstery came in Sand Stripe or Pink Peony. 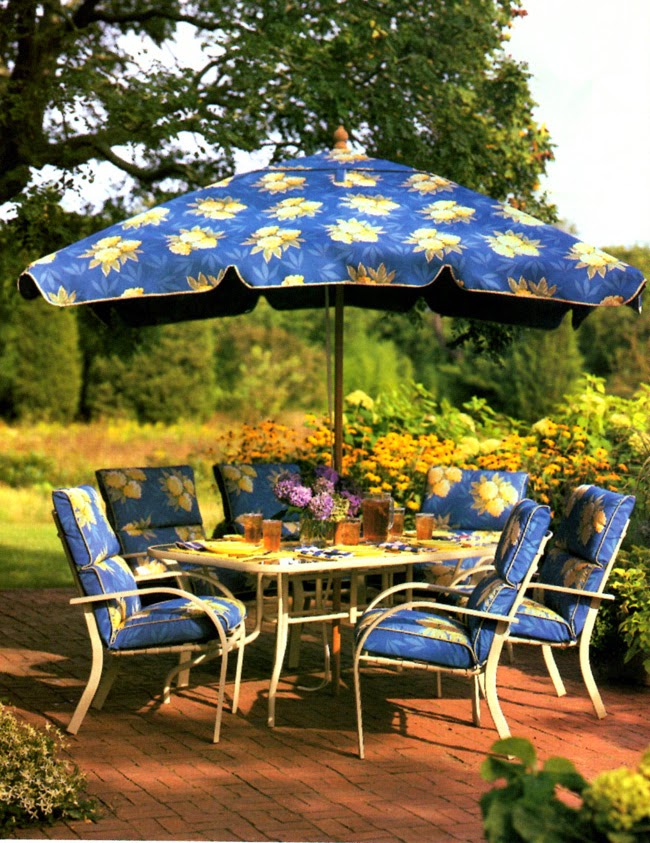 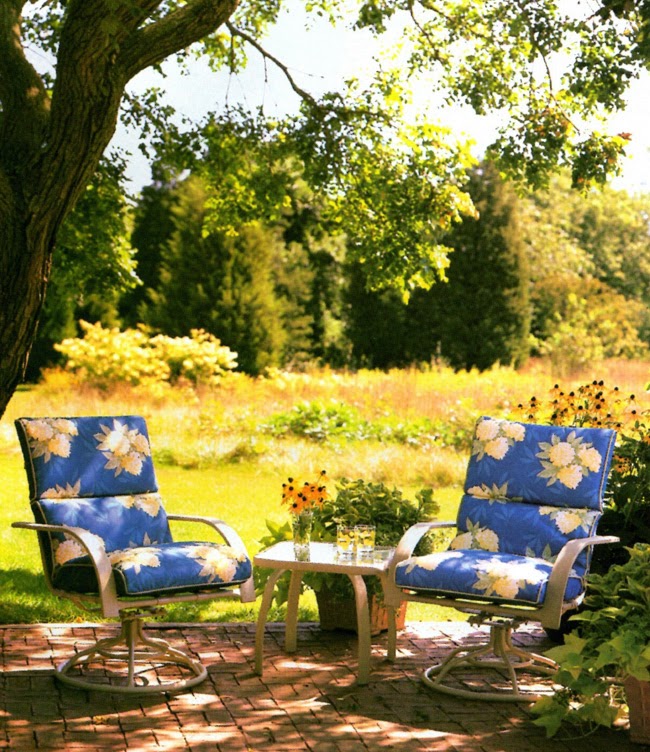 TOP TWO PHOTOS: This is the Mackinaw collection, based on Mackinaw City on Mackinac Island in Michigan's Lake Huron. This was the largest MSE patio collection, featuring a seven-piece dining set with umbrella, rocking chairs, swings, a chaise lounge and smaller patio tables with occasional chairs. 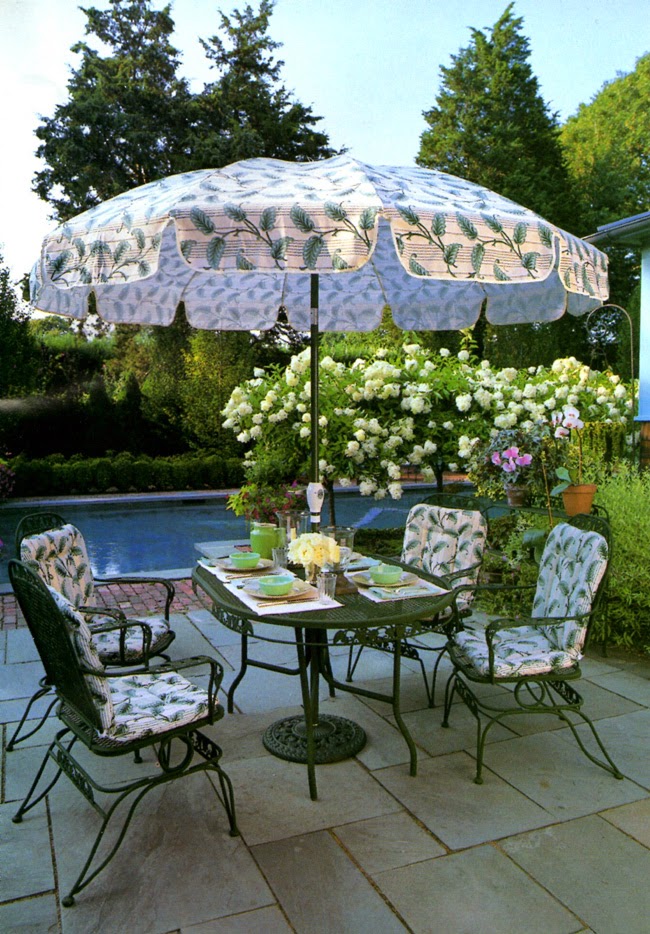 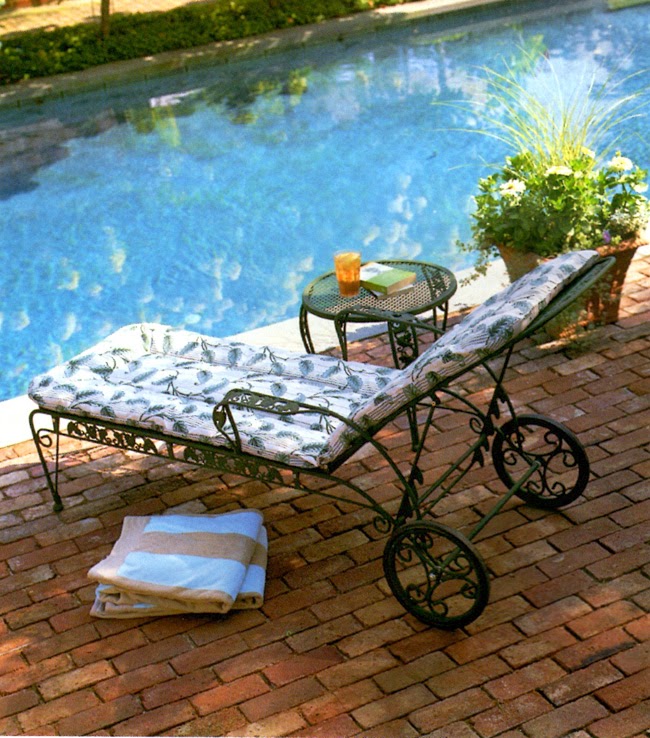 TOP TWO PHOTOS: The Charleston collection is one of the most elegant. Based on the spirit of Charleston, North Carolina, the furniture featured intricate wrought-iron details. The upholstery shown is called Scrolling Leaf but a Rhododendron design was also available for this collection. It featured a five-piece dining set, umbrella, chaise lounge, glider and a three-tier étager. 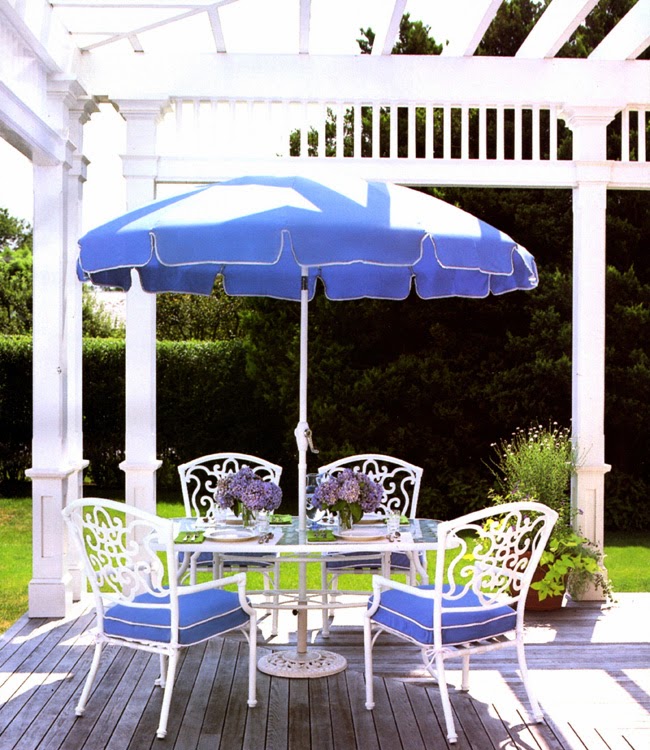 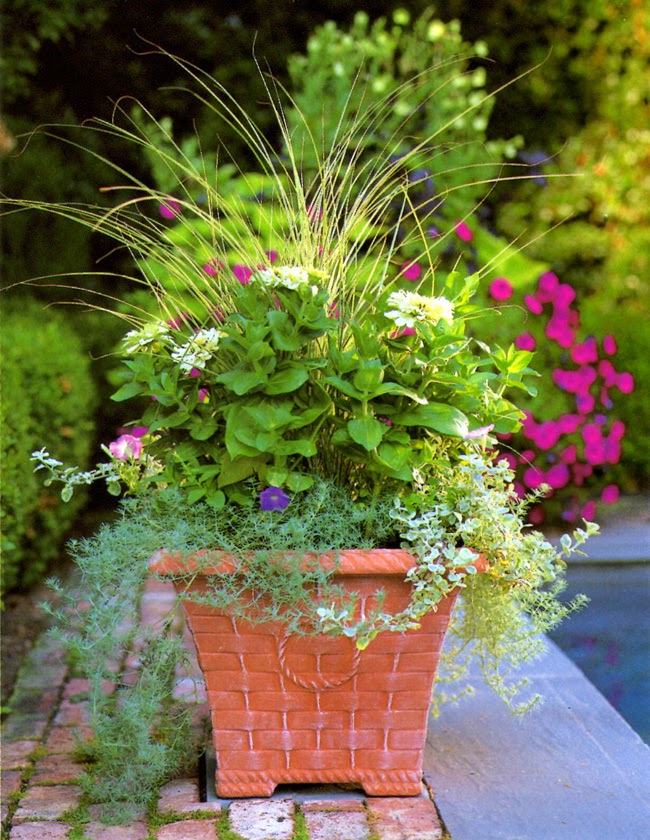 ﻿TOP TWO PHOTOS: This is the Golden Gate collection, based on the seaside elegance of San Francisco. The five-piece set shown above could be used indoors or out. It was made of heavy-guage aluminum, which never rusts, and was powder-coated to resist scratching and chipping. The upholstery was called French Blue Box and the tabletop featured an exclusive pressed-leaf design that was etched into the glass. The new MSE planters were ceramic but lightweight so that they could be moved around the garden easily. 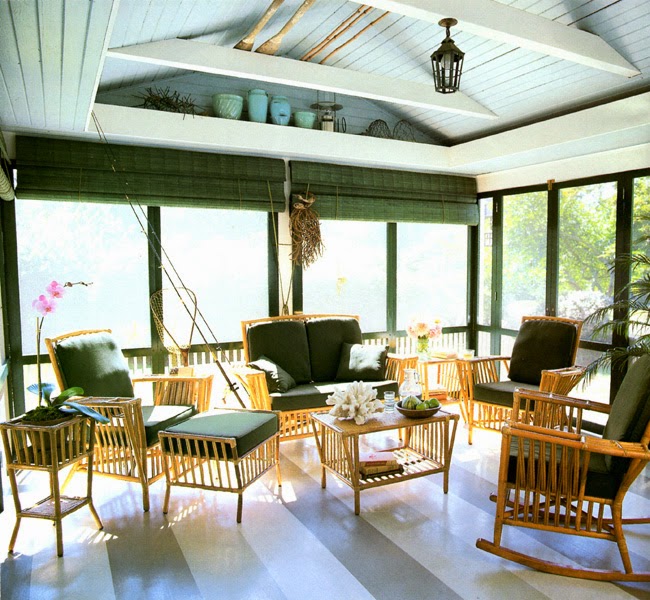 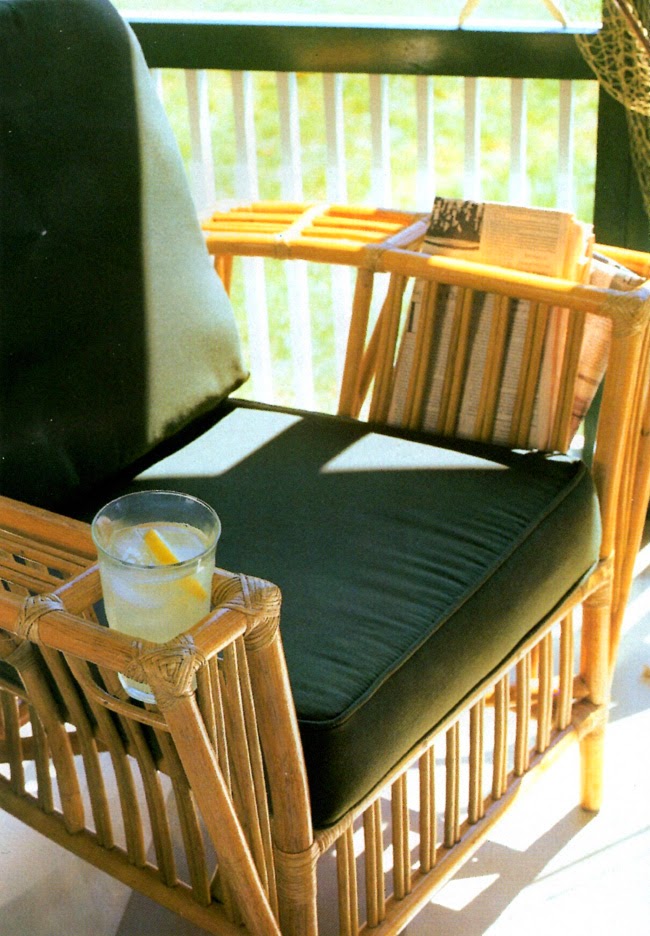 TOP TWO PHOTOS: The Key West collection is among my personal favourites from the outdoor furniture line. I love reed furniture outdoors or on the porch, as shown, and I like many of the design details from this collection, such as the chair with its glass holder and side pocket for magazines and newspapers. 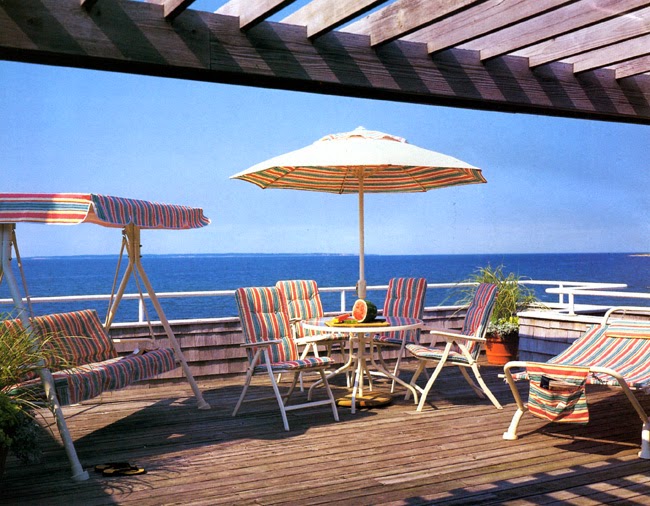 ABOVE: The La-Jolla collection is based on the beachside community found just north of San Diego. The collection featured a five-piece dining set, umbrella, swing and hammock. 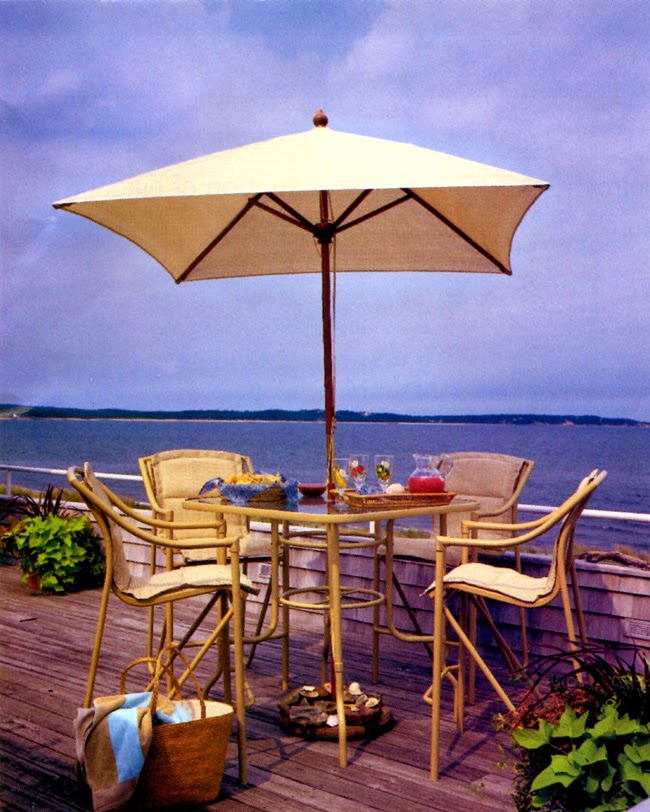 ABOVE: The Maui collection, based on the Hawaiian island, looks as though it is made of wood but is actually made of powder-coated tubular steel. The tall stools (48 inches high) have foot rests and the 8-foot umbrella looks elegant with its simple rectilinear design. 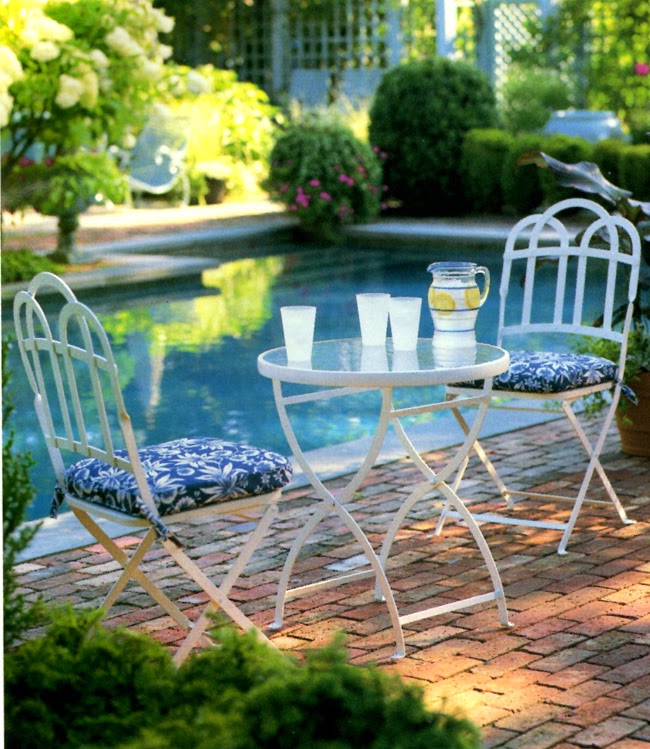 ABOVE: The South Beach three-piece café set is diminutive and charming, perfect for an intimate poolside chat over lemonade. The glass tabletop featured an exclusive wave design. The upholstery shown is called Flowers & Fronds. 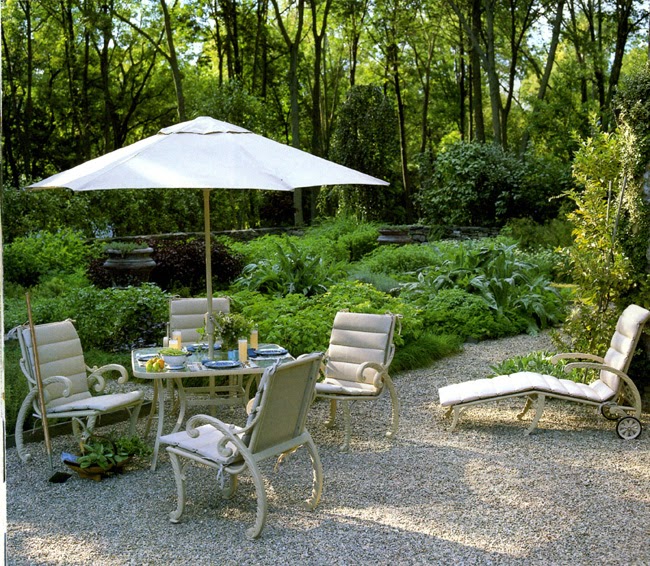 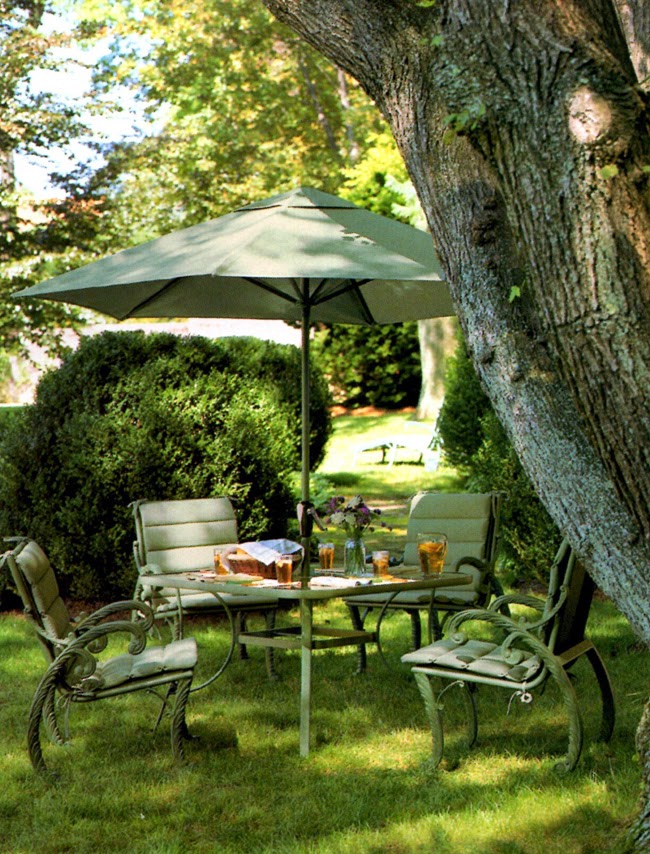 TOP TWO: The Southampton collection, based on the Long Island village, was made of heavy-guage cast aluminum that never rusts. The design was based on Martha's favourite nineteenth-century cast-iron garden chair. I love the unique design and its elegant formality. 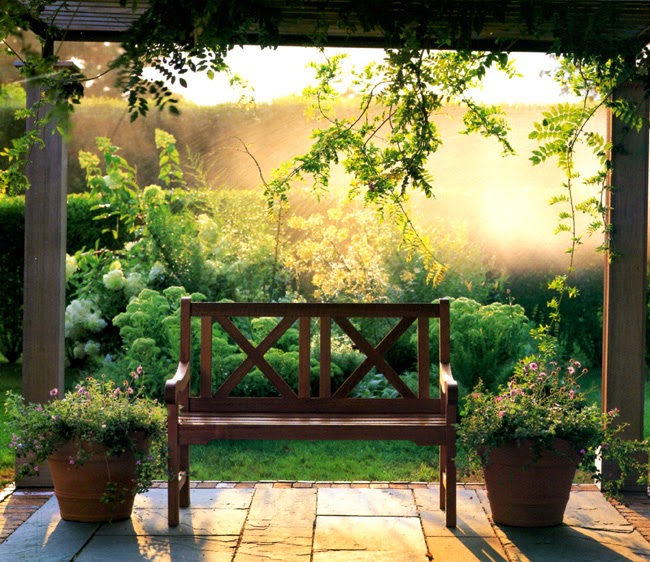 ABOVE: I think this is my favourite piece of all from the initial garden furniture line. It's called the Aspen Garden Bench and is based on a nineteenth-century bench found in a Victorian conservatory. It was made of Nyatoh, a highly durable hardwood. It was available only in select Kmart stores.
Posted by ANDREW RITCHIE at 12:27 PM

So interesting to see this look back at early Martha Stewart designs and products. Some have really withstood time... a few not so much. What is interesting about your favorite piece, the Aspen Garden Bench is that Martha still uses that bench at her Katonah farm. They are painted / stained Sharkey Gray and she uses them on her terraces and in the garden. Amazing that they have held up all these years and is a testament to the good quality of the Kmart MS line.

Hi Andrew,
Beautiful new collection from Martha Stewart's line of patio and outdoor furniture. The 1999 collection was beautiful, I remember when she launched it.
I love your favorite piece, the aspen garden bench, so pretty. Thank you for sharing

Small correction: Mackinaw City is not on Mackinac Island. In fact, there is only a seasonal resort village and a conference center on the island. Don't know why a patio collection would be named for Mackinac, except to include Midwest location. . . .

I remember some of those pieces. Martha and her teams' designs have always offered nice options at various price points. I'll have to take a peek at the new HD collection. Thanks to Kenn for the scans and thank you Andrew for the trip down memory lane.

Just re-finished our Aspen bench for use this summer. It has served us well for many years, in fact almost forgot it was an MS product from KMart. I believe it was $100! Amazing! It's a shame MS let her line at KMart get so shoddy, it had such promise and was accessible to those of us who used to shop there. Not so interested in her goods at Home Depot.

Cant shop for any of the new collection seen in the link you posted! its all so beautiful are you sure its a new collection? i can only find the older stuff?!!

I'm assuming the collections are new since it says, "Introducing Martha Stewart Living Patio" but, yes, the link to shop the collections does seem to be broken. Perhaps they're not yet available online?

This link seems to work: http://www.homedepot.com/b/Outdoors-Patio-Furniture/Martha-Stewart-Living/N-5yc1vZbx4oZ4tg

Fun look back. I'm interested to check out her new line at Home Depot. I'm in the market for some new patio furniture and would love to find something stylish but affordable. I've been searching with some luck at http://www.beliani.com/outdoor-furniture-sets/, but will definitely also check out the new line!

I purchased a number of pieces of MS patio furniture from Kmart in 2007-2008 (dining set, love seat, coffee table, side tables, side chairs). The store has since closed. It is a bronze metal set in a Mission or Arts and Crafts style. The tables have ceramic tile inserts. I have been looking for almost a year to find replacement cushions to fit it with no success. I thought the MS company would take better care of its customers than this, even if their relationship with Kmart ended. Very frustrated and unhappy with MS furniture! Jo

I like this subtle look that Martha Stewart creates. It's just a simple and elegant look. It mainly reminds me of the Oregon Coast. I really like the camera work they did on this blog. The last one is my favorite because it looks like a movie set, which is how I want my patio to loo k. http://www.thepatiocorner.com/windward.html

Hi Andrew. I own the Victoria patio set from the Martha Stewart line and would like to replace my Peony cushions. Can you please tell me where I may find replacement cushions for this set?

I have the Victoria canopy swing and need to replace the canopy cover. Can't find one anywhere in any color. Where can I get one? I would hate to have to replace the the swing since I have the full patio set.

Looking for resin grey patio chair, Salinas collection. Please contact me if you have and are selling. It's an old wicker style, dark grey.

I also am looking to replace my peonies cushions for my patio set. Or even anything that would fit the same for the victoria set

Wow! all these patios look amazing. I was wondering if I can get such an amazing outdoor furniture in Canada.

Looks fantastic. Fabric and its paint combination is great. I have also found some outdoor fabric stuff onOutdoor Upholstery Dubai I bought some washable fabric too from this site and i am satisfies with their service.

Our MS Everyday Garden Patio Furniture Victoria collection from K-Mart have stood the test of time on our sun porch!
Would love to replace the cushions on our dining chairs tho. Can you send any leads/links in order to do that? Thank you in advance!

I need screws and caps for the chairs. Where can I find them?

Hello! I'm Carla DeGripp from Rochester hills MI! I have a resin wicker set. It consists of 2 chairs w/ottomans,a setee,end table and coffe table! I'd like to find the name of it and maybe find the original cushions. It was bought about 15 years ago. Oh and it's a light olive green. Any information you have would be amazing!

I need repair to my rothiron table. The legs attach to the rim on the glass top. The legs are held into place by an oblong plastic clip. Can I purchase these? I love my set and have refinished it ma y times over the years and now the clips have dissinerated. Please contact me with ideas to replace.