I've wanted to bring this post to Martha Moments for a very long time: the complete collection of covers of Martha Stewart Kids, pictured in order of issue. Serious collectors of Martha Stewart's magazines know how valuable these magazines are today - not in terms of cost, but in sheer sentiment. Below are scans of each cover followed by some information about this sadly-missed magazine: 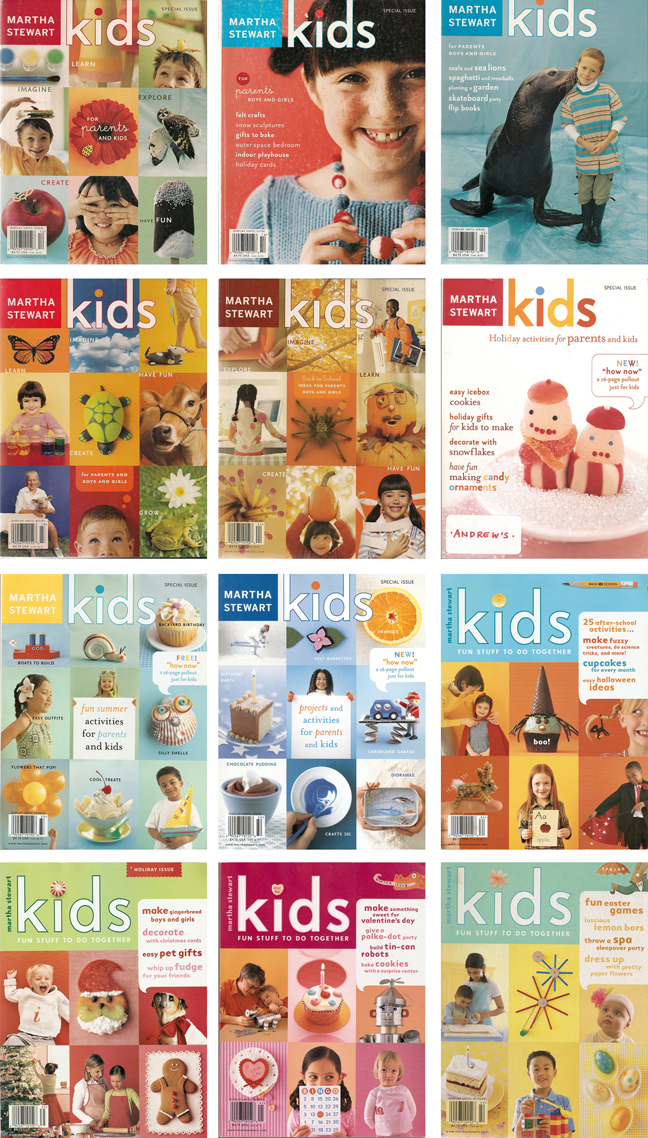 I first started buying the Kids magazine because of my young nephew - a new introduction to our family in 1999 and a new source of inspiration for creative crafts. I do not have all 21 issues of the magazine, since many of the issues were given away to Jacob (my nephew) or were used to the point of disintegration! I did manage to keep eight of the issues in pristine condition and I cherish them today. Many of the covers here were scanned by a Martha Moments reader in Brazil, a very generous woman named Heidi who took time out of her weekend to scan most of the covers for the blog. I am truly grateful to her, since archiving for the sake of posterity is a fundamental feature of Martha Moments. Below is a bit of history about the magazine.

Martha Stewart Kids was launched in the fall of 2001 as a special-issue publication. It was issued quarterly at first and then became available for subscription, publishing six times a year by 2004. The magazine underwent numerous design changes in its five years on newsstands, from a change in size to a new title in 2003: Kids - Fun Stuff To Do Together. The editor of the magazine was Jodi Levine, a longtime editor and product designer at Omnimedia. Celia Barbour, editor of Martha Stewart Baby, also contributed.

Kids won numerous awards in its short time on newsstands. It was named Magazine of the Year by the Society of Publication Designers in 2004 and it won the National Magazine Award for best design in 2005. Filled with wonderful photography and imaginative craft ideas, Kids became a leader in its category. Its layout was spectacular and filled with information for both parents and kids regarding all manner of topics, from pets to science to nature to cooking to crafting to sports to parties to decorating, and on and on it goes! The magazine contained recipes, craft workbooks and a very unique "How-Now" section: a detatchable booklet for the young reader filled with puzzles, quizzes and games. This section usually focused on a specific animal and the activities in the booklet (mazes, jokes, etc.) centered around this animal theme. Kids published its last issue with the Spring 2006 edition.

Candy, vintage party hats, crepe paper in every hue, paper bowls from Bali, and old crafts magazines are all fodder for the imagination of Kids editorial director Jodi Levine, who also designs for the company's crafts line. Her office is pictured below. 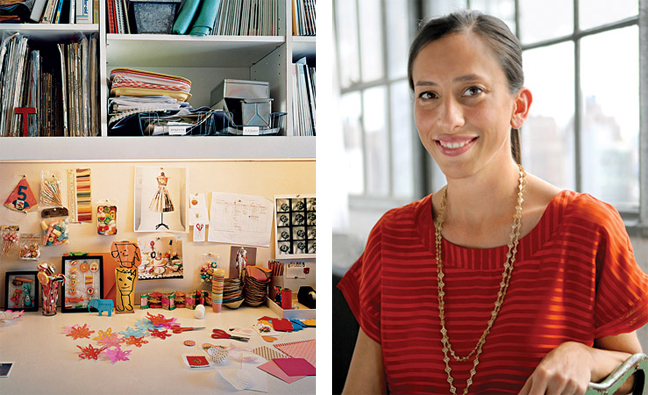 "I look in funny places to find ideas," she says. "Everyday detritus inspires me. It might be the beautiful stripe on a sugar packet or the lovely rose printed on a plastic bag. I tend to hoard stuff like that. Once, the swirl on a kids' lollipop inspired a whole story." 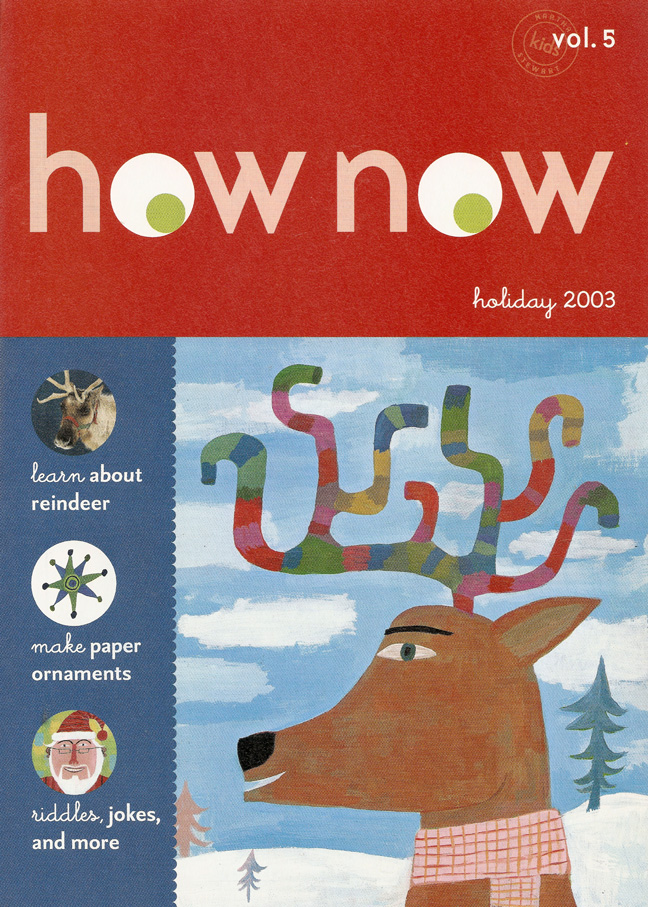 One of the covers of the "How-Now" section - a detachable booklet that came inside each issue of Kids. The illustrations were done by Calef Brown; games and riddles were by Puzzability. 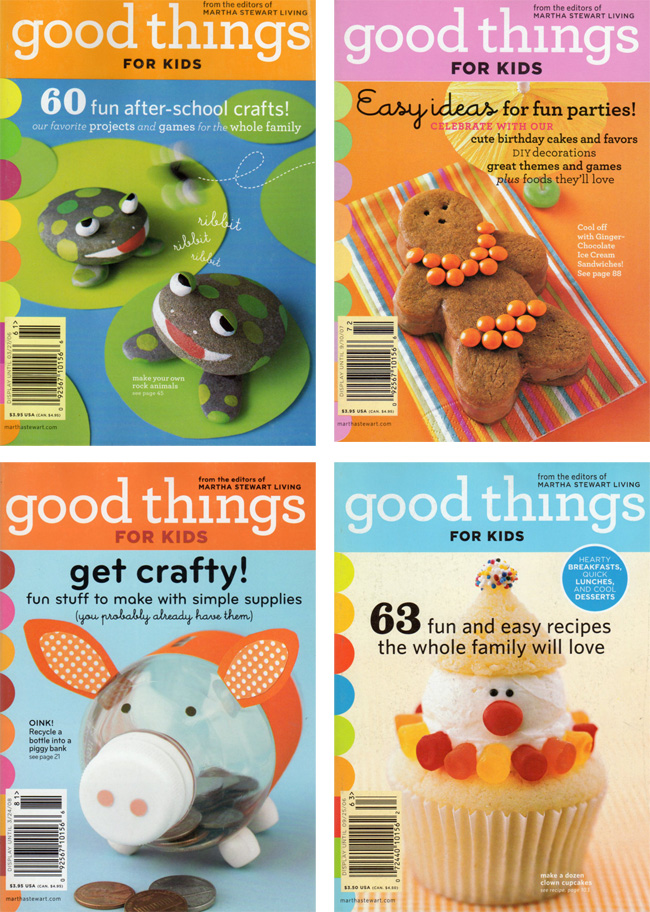 Between 2003 and 2008, Martha Stewart Living published 10 "Good Things" digest magazines, featuring the best ideas from its magazines. Four of them (shown above) were compilations of kids projects and recipes taken from the pages of Martha Stewart Kids magazine. 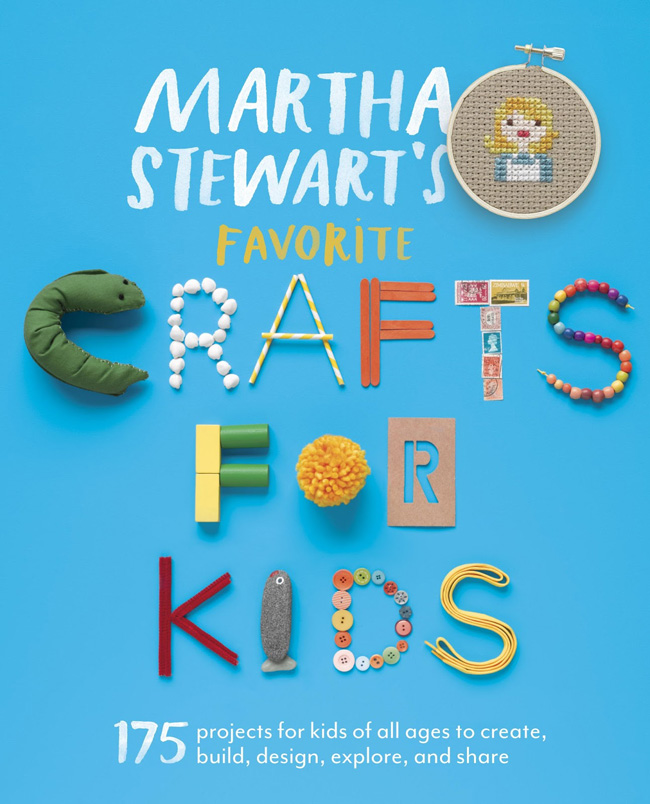 In 2013, Martha Stewart published the best 175 projects for kids that had been featured in the Kids magazine. "Martha Stewart's Favorite Crafts for Kids" became a New York Times Bestseller!

Posted by ANDREW RITCHIE at 7:01 PM

This is a wonderful tribute to Kids! Jodi is amazing at everything she does and she's a lovely person as well. To give credit where it is due, Celia Barbour (another talent powerhouse) was Editor in Chief of Kids before Jodi.

You Can Call Me Jane said...

I have several of the Kids magazines and love them. Why would such a good mag leave us? I had renewed and paid for another subscription and they notified me that they had ceased operation and applied my $$ to another publication . . . so sad!

Wow I haven't seen these magazines, but I heard about them. I love these magazines. Jodie is amazing, I love her work, talent she is so creative. I remember seeing her wedding, it was amazing and she made all the flowers from Crepe paper, it was beautiful.

I just purchased 11 of the Kids Magazines on eBay. I hope to find the others. I want to get the Living magazines from the 90's because I feel they are the basis of everything MSLO is doing today.

The best editions of MSL are from 1997 to 2003, in my opinion. The early editions are great to study the evolution of the brand and to see how Martha's style has changed over the years. The magazines are great representations of how "lifestyle" has evolved.

The Kids magazine was my favorite! I was very sad to see it go!

I loved these magazines. I have a few on my bookshelf. I've not opened them in a while, mainly because I don't have to. I remember most of the projects.