Martha will soon star in a new competition show on The Food Network called "Bakeaway Camp with Martha Stewart." Acting as a mentor to six amateur bakers, Martha will guide the contestants as they rough it outdoors in tents and lean-tos while creating camp-inspired food with the barest of essentials. A snippet from the show's casting call shared on Apartment Therapy, describes the show like this: "part exclusive culinary retreat, part baking boot camp and part summer camp-inspired competition with a cash prize." The contestants will all take part in baking challenges, sometimes facing the unpredictability of outdoor situations. Their culinary creations will, of course, be judged and there will, of course, be a winner. Confirmed judges are Chef Barbara Hall, food blogger and Food Network Host Dan Langan and former Bachelor star Jesse Palmer. 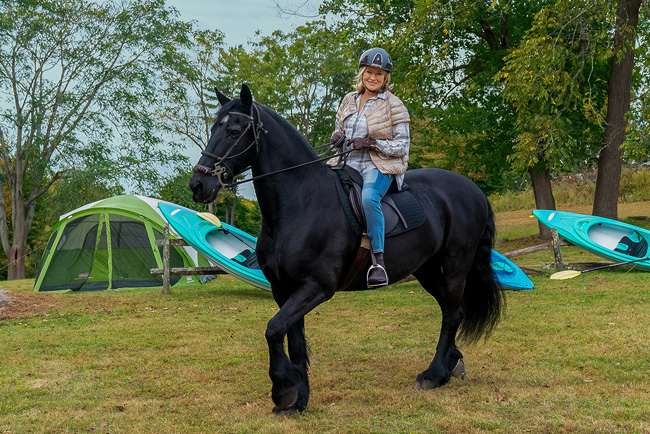 The contestants are all competing to win a $25,000 kitchen renovation. Prizes will also be awarded to the winner of each of the challenges throughout the series, including a one-on-one cooking lesson with Martha at her home kitchen in Bedford, New York. An air date for the series has not yet been announced.
Posted by ANDREW RITCHIE at 12:04 PM

My husband and I are Food Network addicts, so this sounds right up my alley! I just hope it isn't awkward and poorly produced like some of their most recent offerings, but I imagine Martha alone will make it worth while.

Good Grief Charlie Brown HOW did I miss this??? Thanks for the Intel AR perhaps there will be another casting call and I can tell the Young UN encumbered chefs in my social orbit of this to look into. Usually it is a small cadre of KNOWN UN knowns thAT ARE UTILIZED no? or those thAT applied did not make the cut yada yada got a "call back" ya da is the playing field really level??? In any event what is your take of the FORMAT


do they have to build their own ovens?? A solar reflector oven-- a card board box wrapped in tin foil or a tuna can wax infused corrugated cardboard sterno HACK LOL I chaperoned a boy scout event to prepare participants in culinary camping skills and or earn a badge or two-- is was LAST century so For give me as I reflect-- Coleman stoves I have owned but sold them at yard sales Och she said as she kicked herself.. perhaps a horse will provide a source of heat Really recycle Baby Ugh!