Every so often it's nice to showcase the talent of the wonderful people who read this blog and who take part in the Martha Moments discussion group on Facebook. There are so many talented people out there who turn to Martha for ideas and inspiration and then fuse that vision with their own creative designs for a meal or a table setting. I'm lucky to have connections to so many of these great people from all over the world, united by our interest in Martha's books, television shows and magazines - and all of the ideas they proffer. Below are some highlights from the holidays, submitted by Martha Moments readers from France to Australia and throughout the United States! Enjoy! 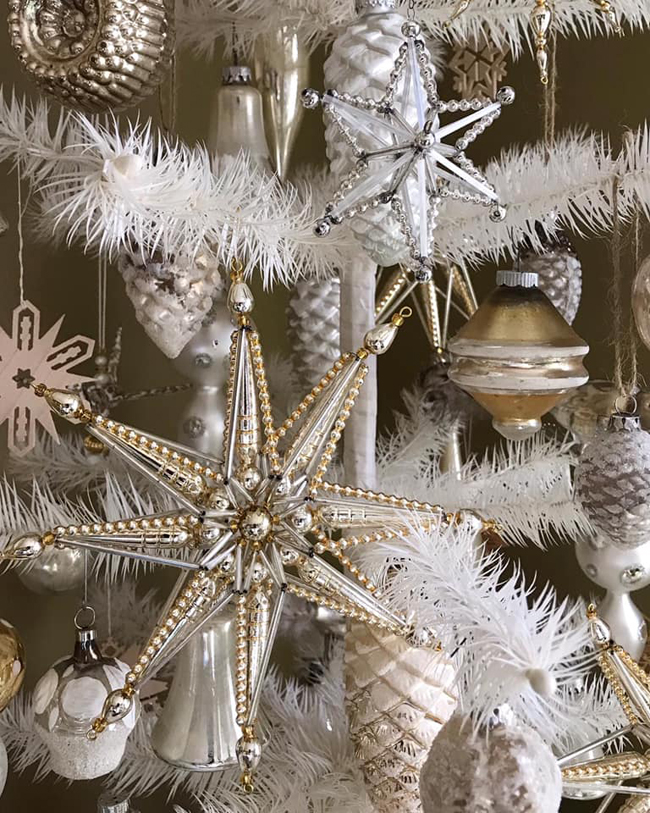 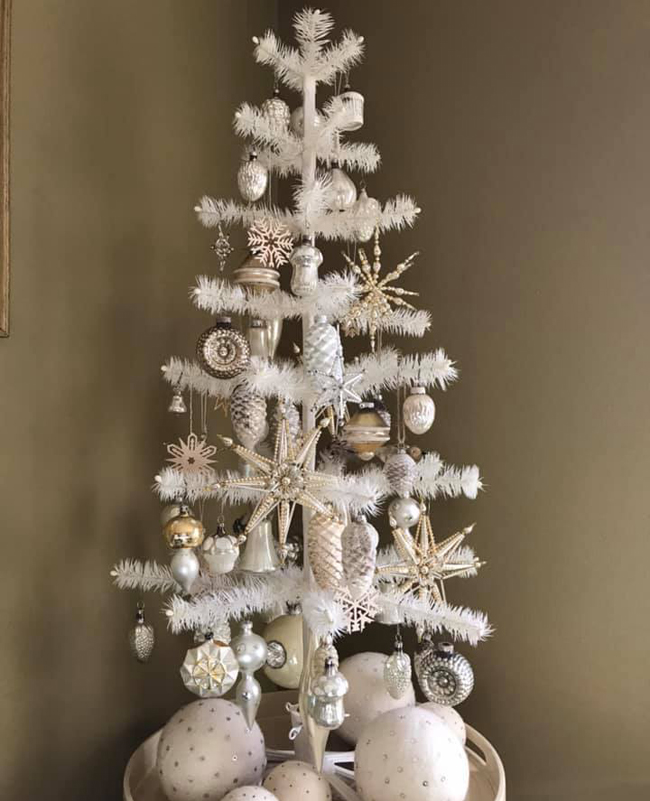 Along with Martha's ornaments are collectibles that Bernie discovered at tag sales and flea markets. 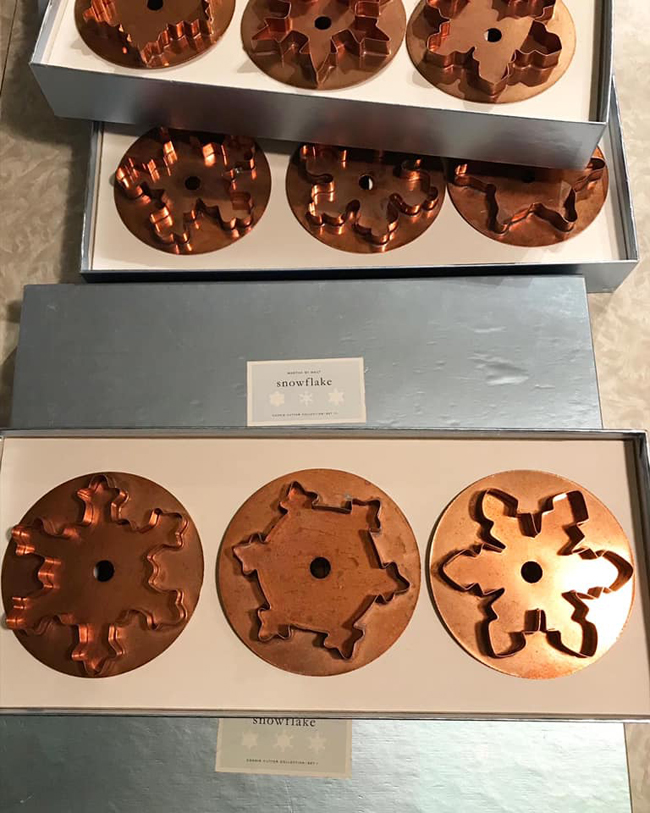 Bernie and his friend Dennis Landon decided to make Martha's chocolate snowflake cutout cookies this year for the holidays. It was a Martha Moment from beginning to end, starting with her chocolate cookie dough recipe and the use of these Martha by Mail snowflake cookie cutters. 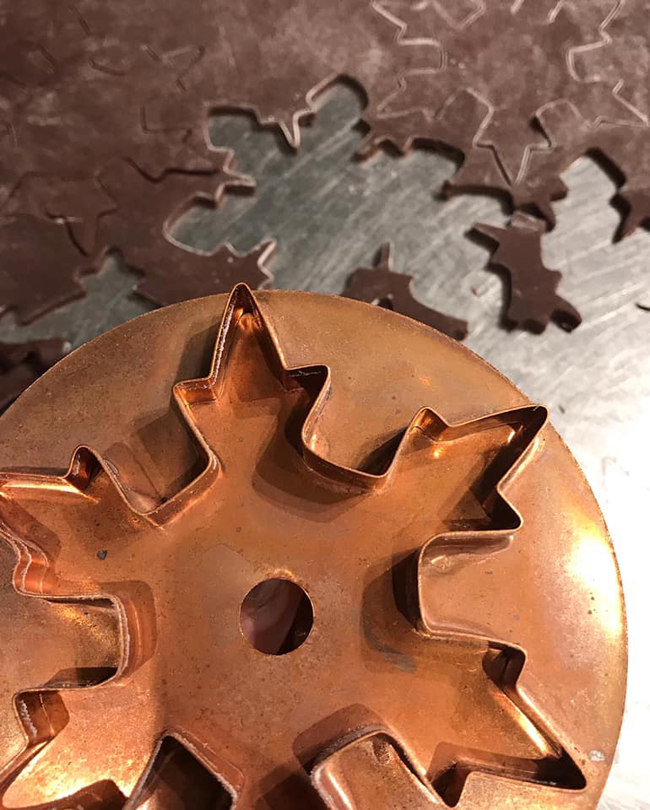 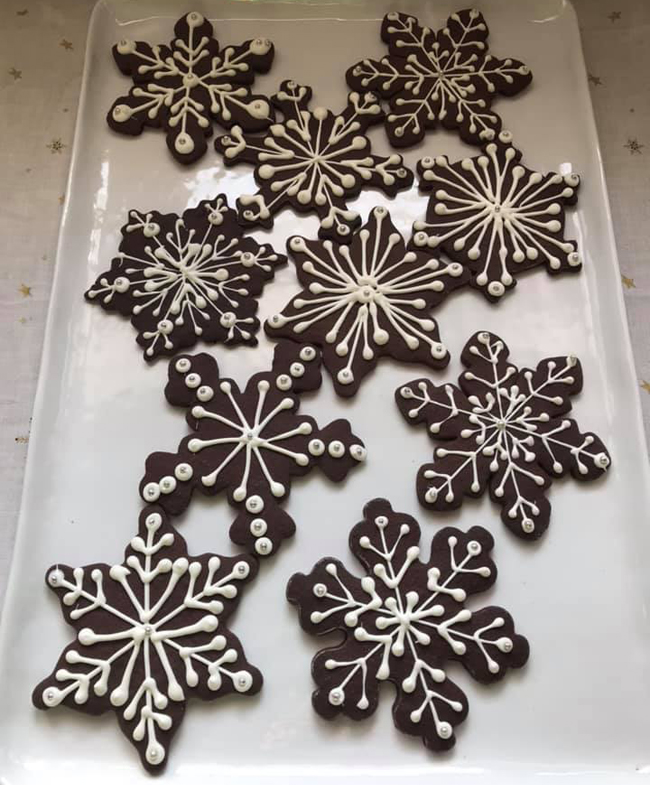 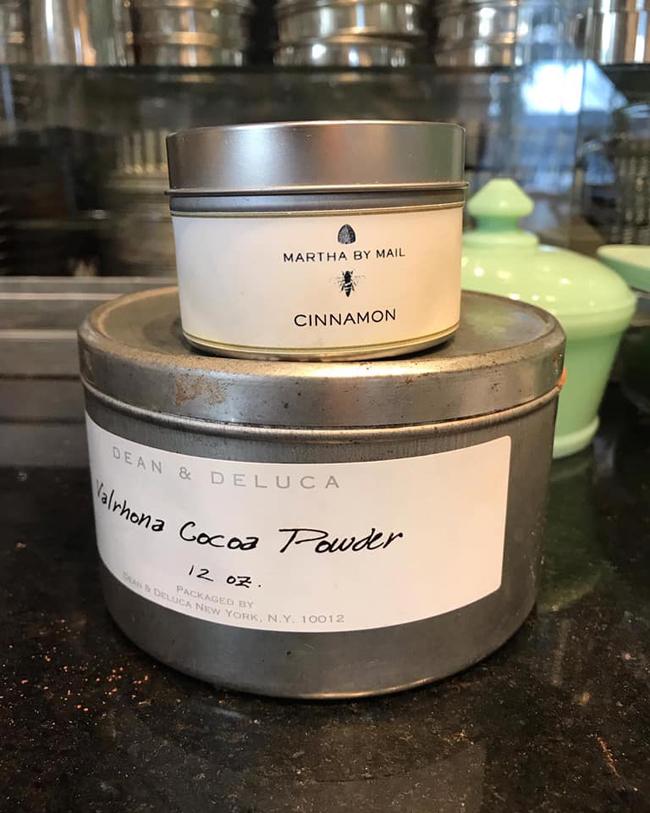 Dennis has kept all of the spice tins from the Martha by Mail catalogue days and continues to use them to store his spices. (There's even one from Dean & Deluca in New York). 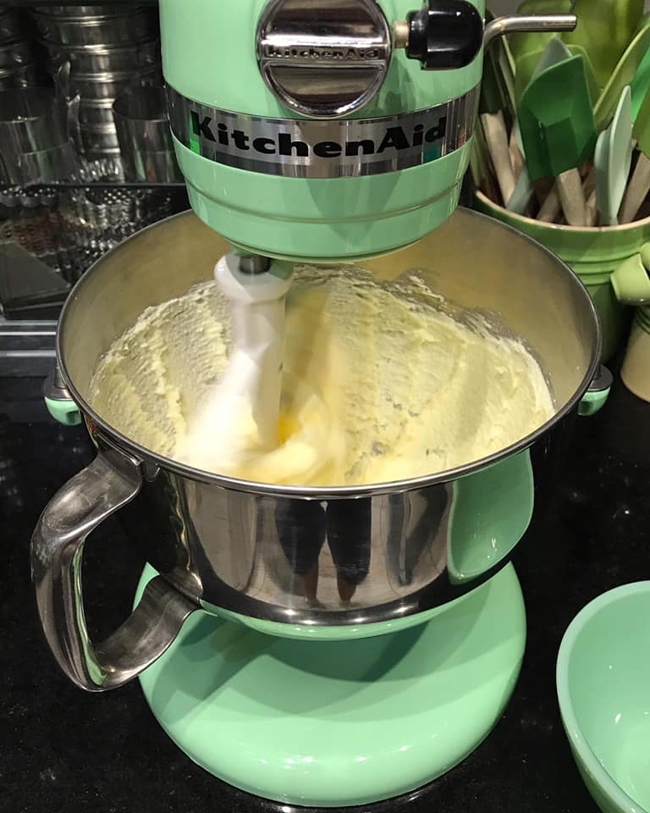 Dennis's Martha by Mail Kitchenaid mixer in "Martha Green" was put to good use this year! 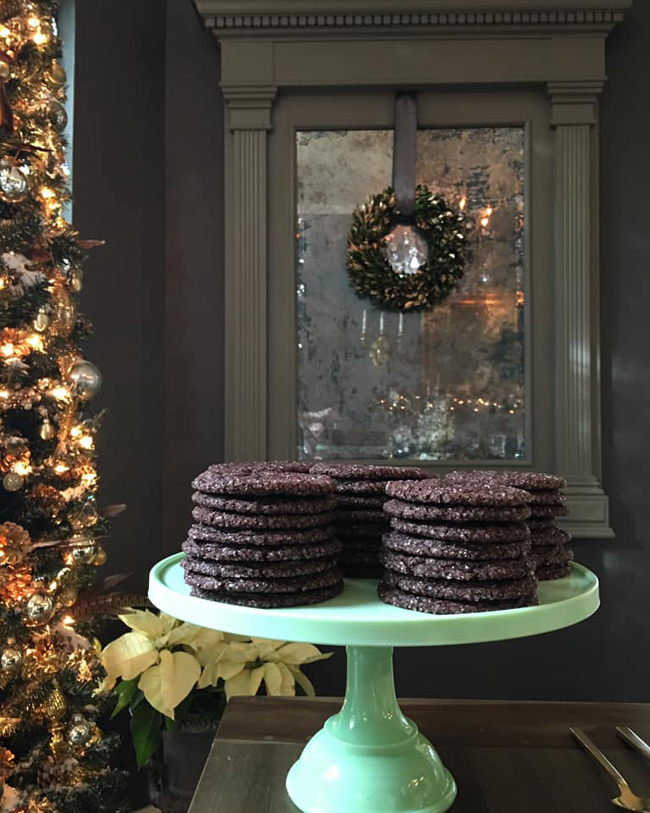 Anthony Picozzi, in Rhode Island, also made some Martha cookies this year. This recipe is Grammy's Chocolate Cookies, one of Anthony's favourites.They look beautiful stacked on this Martha Stewart cake stand. 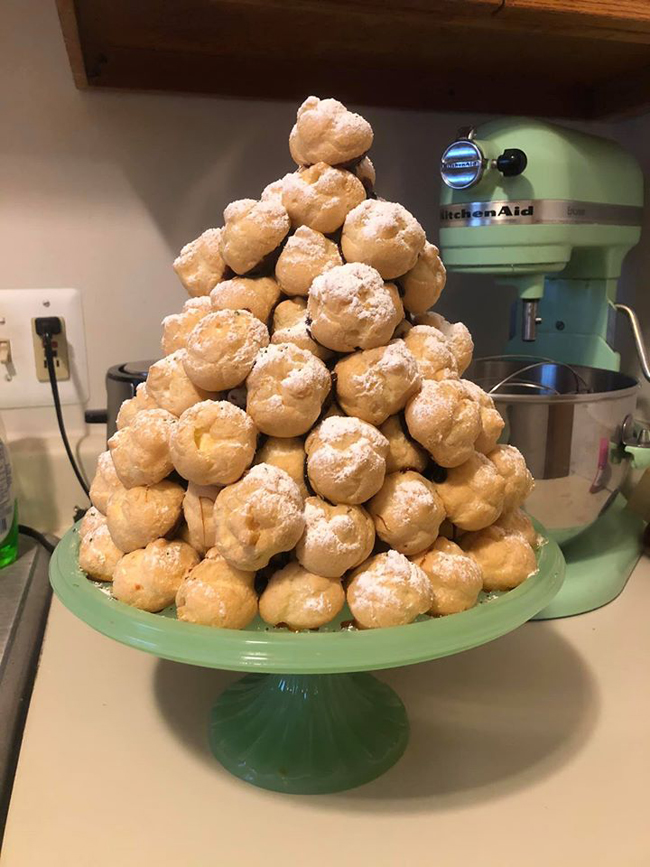 John Roberts's Martha Stewart cake stand and "Martha Green" mixer play backdrop to his beautiful croquembouche, which he made for the first time this year. John lives in Michigan. 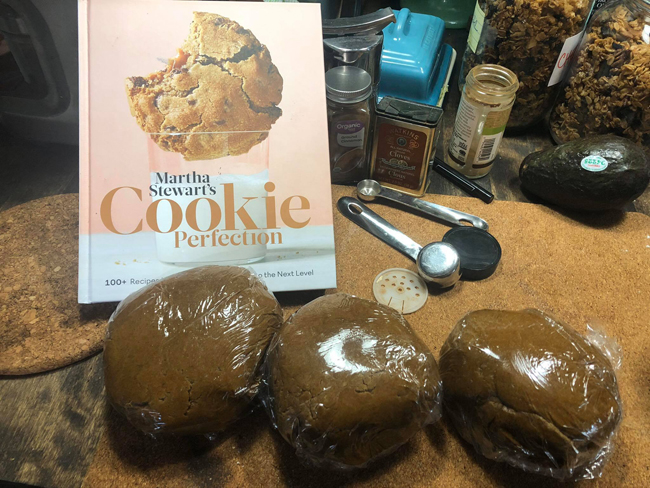 Maria Newcomer loves Martha's gingerbread recipe from her new book "Cookie Perfection." She made three batches of it! 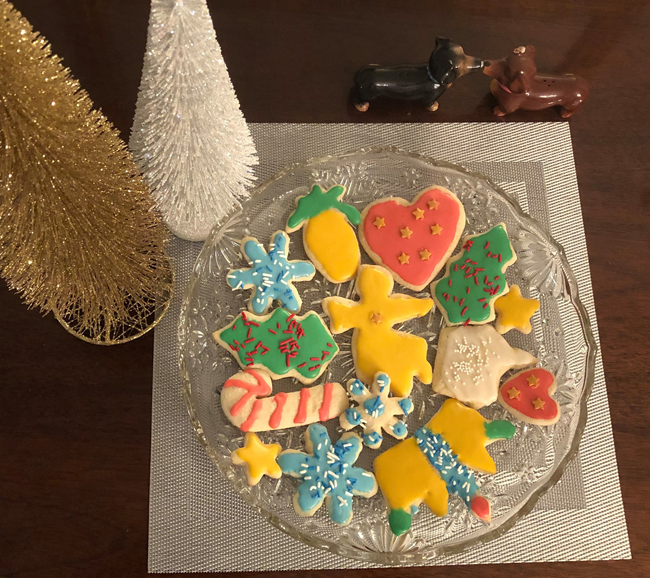 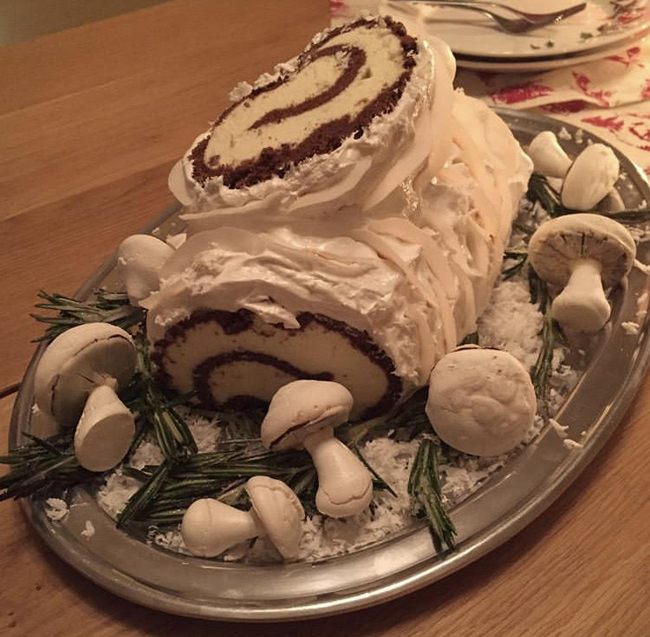 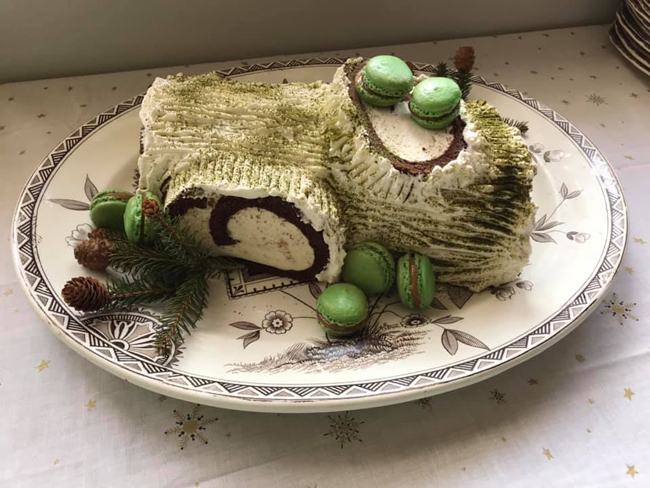 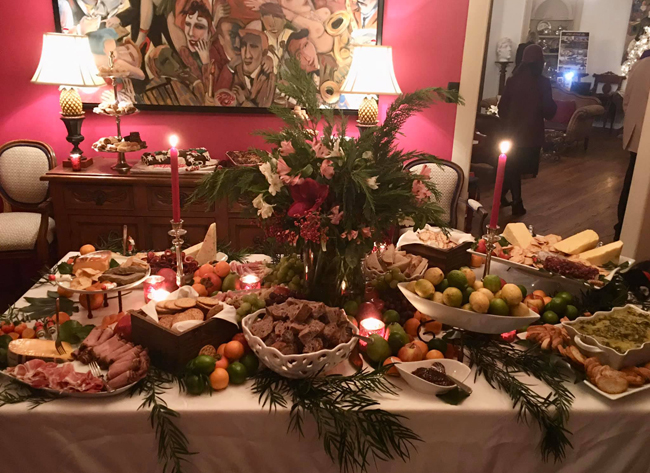 James Richmond in Hollywood had quite a spread at his holiday gathering, which was used to gather donations for a local toy drive. 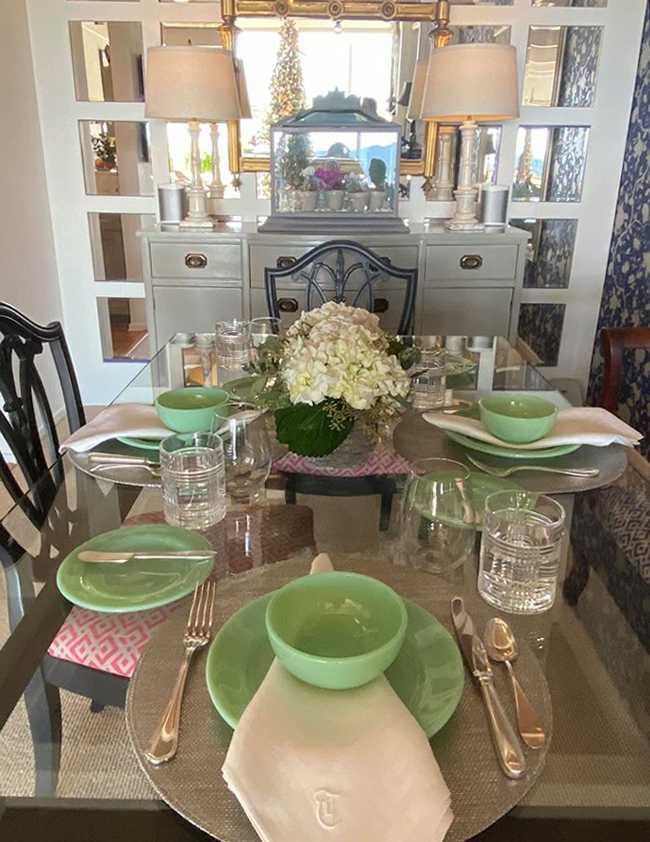 Todd Reyes says that Martha was the inspiration behind his Jadeite-laden table setting for his holiday brunch this year. 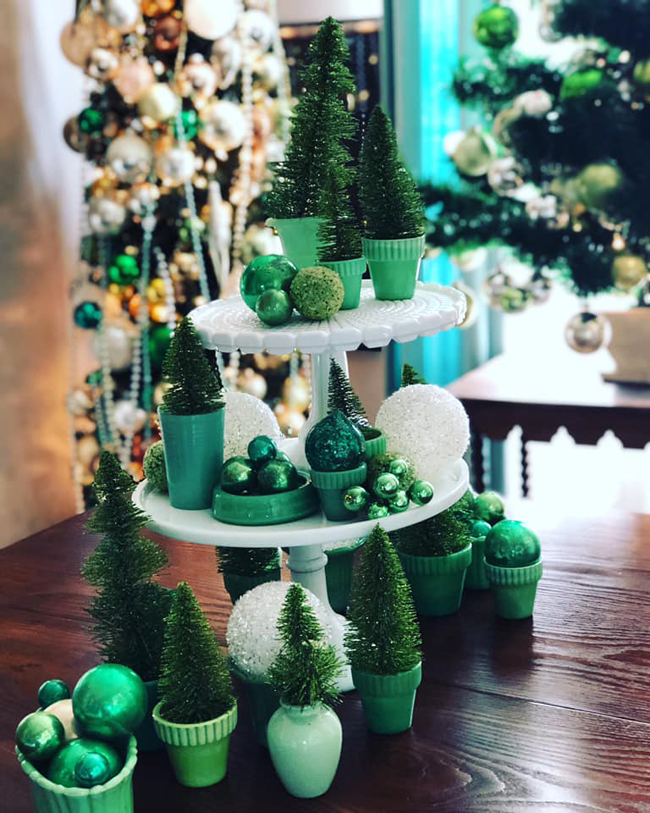 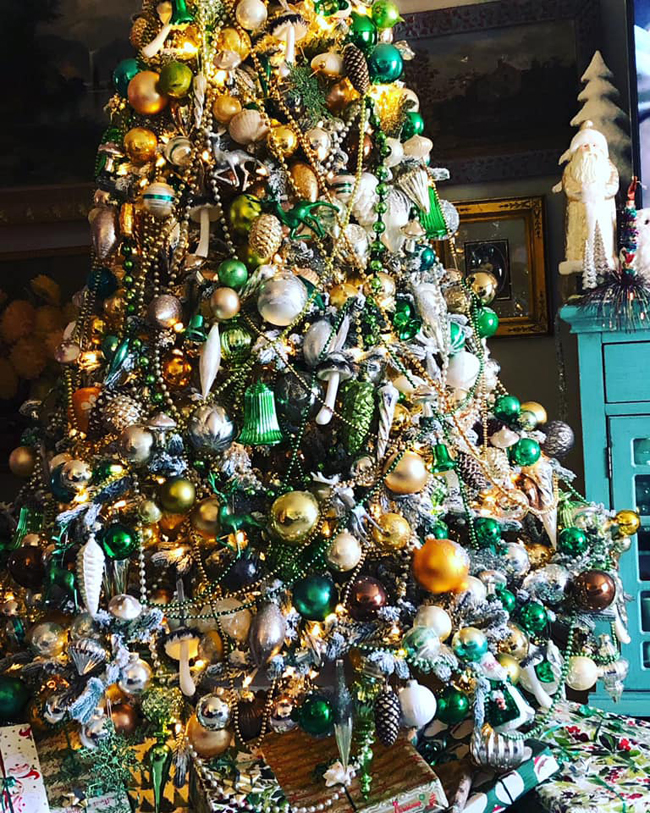 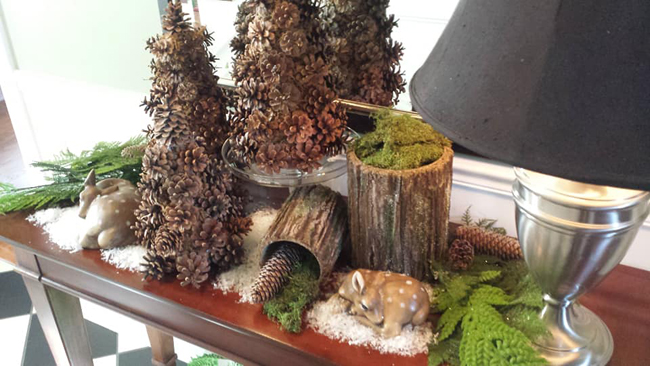 Josh Modory created this whimsical forest scene on his entrance table using faux-bois planters and beautiful pine cone pyramids he made himself. 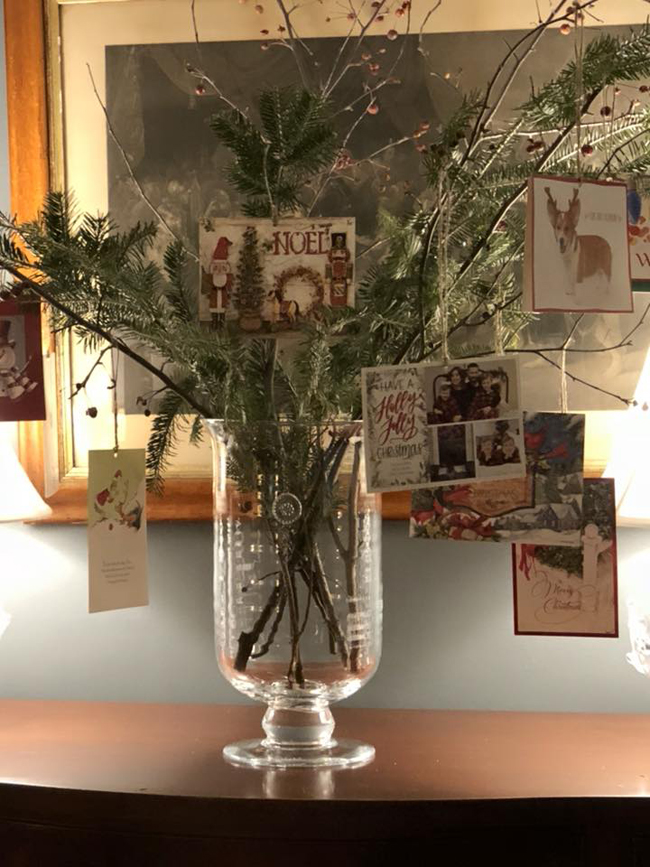 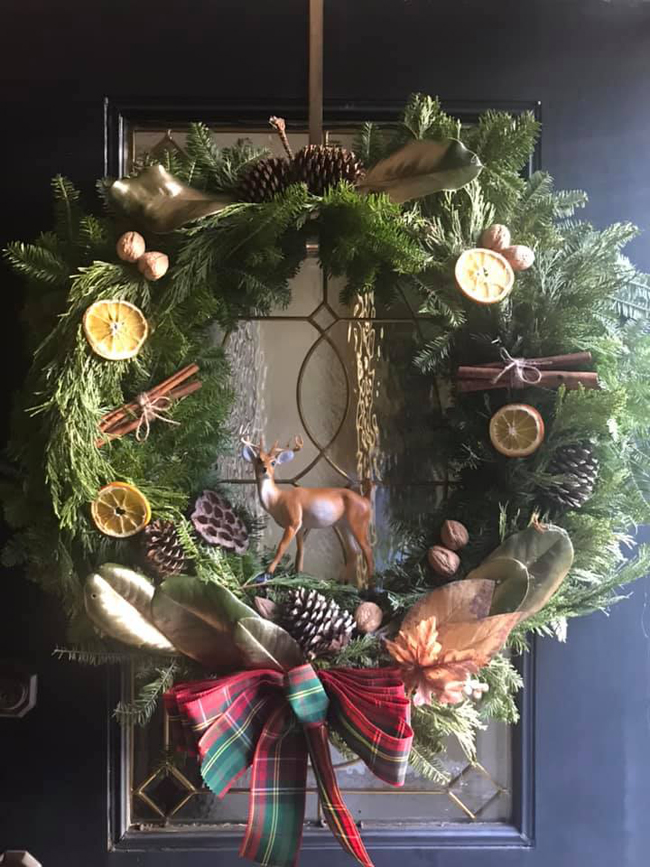 Lisa Foust made a beautiful wreath for her front door this year! 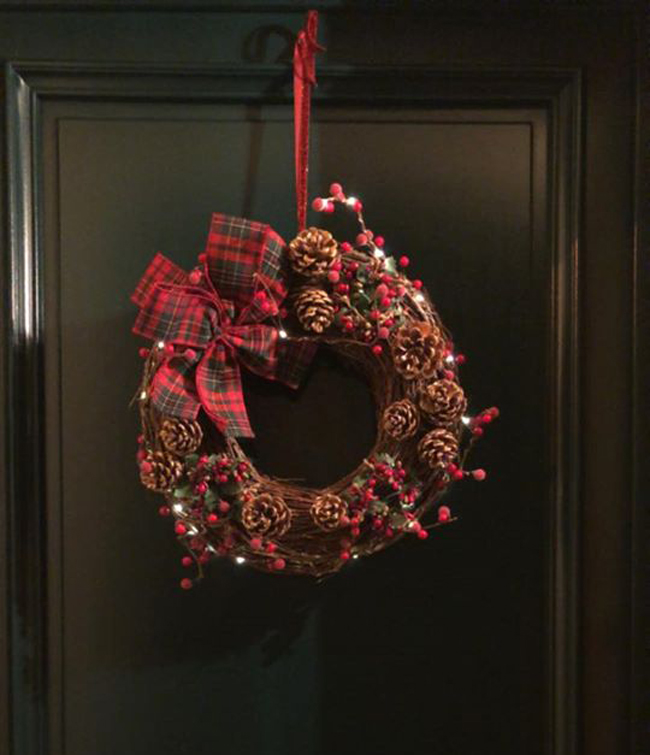 Aude Ihcseb in Paris, France, also made her own pretty wreath. 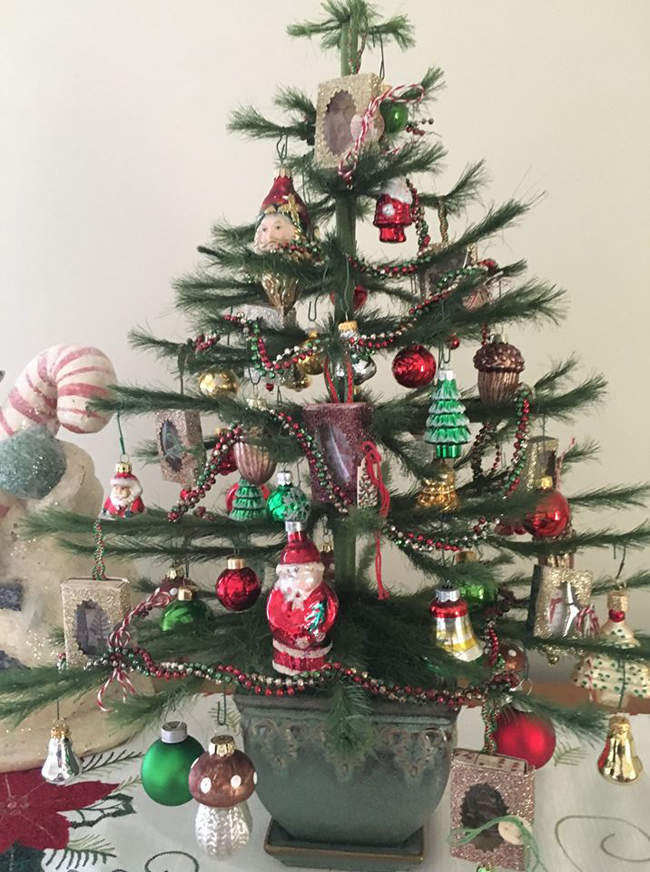 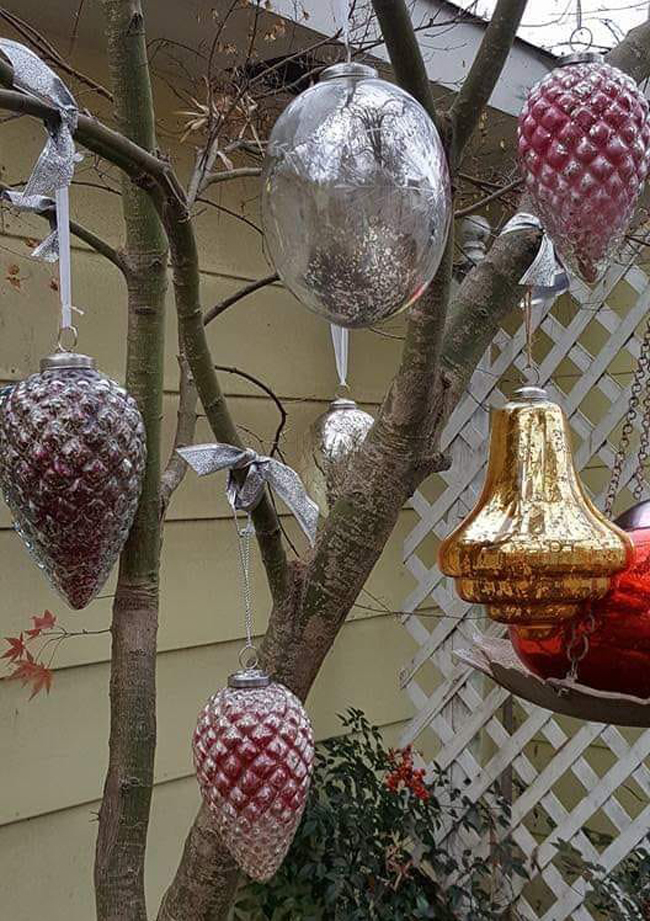 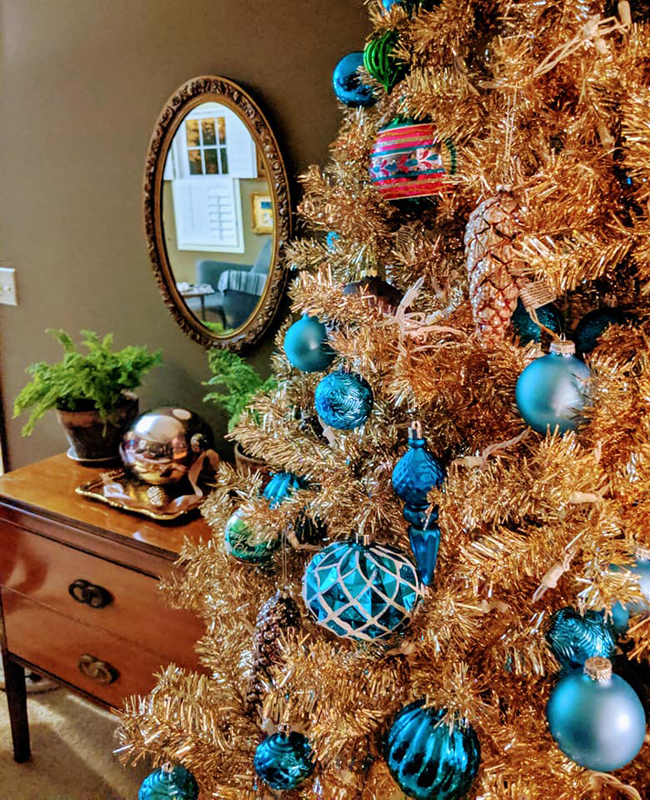 Inside, Todd put up one of Martha's gold tinsel trees and dressed it entirely in blue and green ornaments. 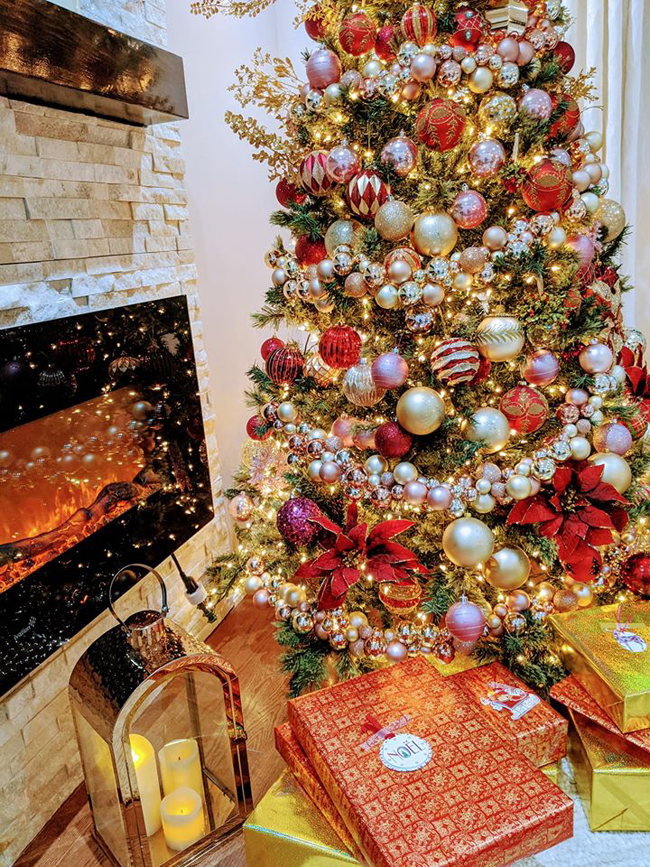 Yen Neri Arboleda's tree is so expressive and exuberant! 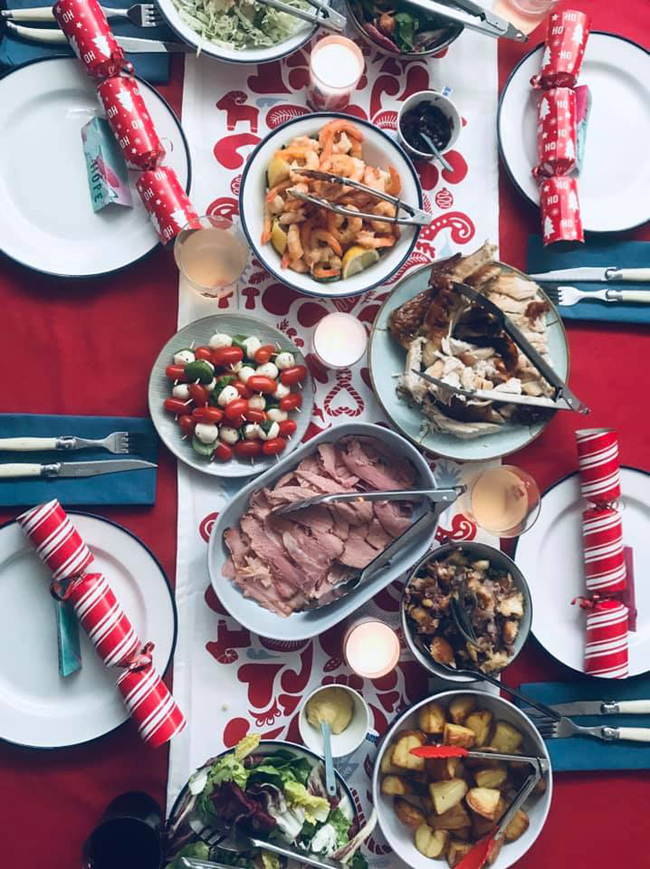 Ramona Barry in Australia used the Scandinavian themes and colours featured on the cover of the December issue of Martha Stewart Living to guide her table setting this year. 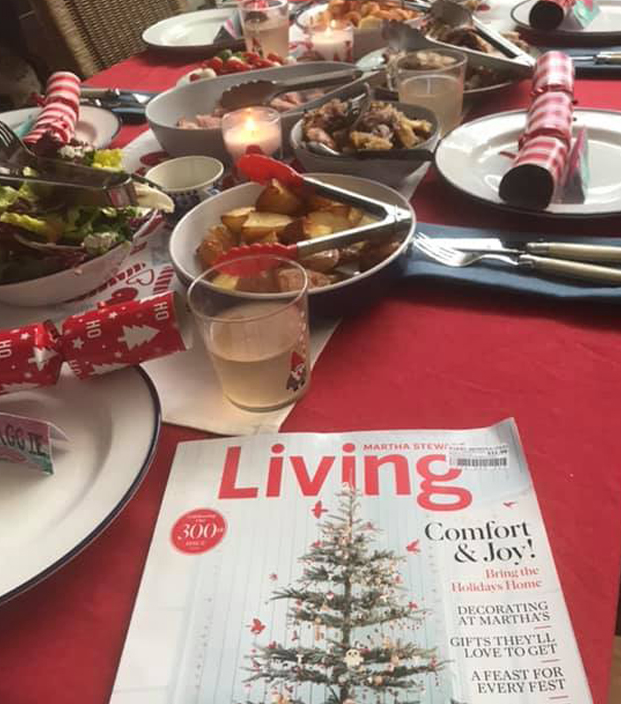 I hope you are all having a happy and memorable holiday season!
Posted by ANDREW RITCHIE at 2:24 PM

I am so proud of all of you people who did so much for the holidays! Thank you Andrew for corralling. Now as for the photo of the cookies being cut on the metal table over at Bernie and Dennis's home I don't know whether to drool more over the cookies or the steel table. Okay the steel table - I simply must have one! May 2020 bring us much joy and, pardon the pun, clarity in our vision of all things Martha.

AR during a recent cooking demo MS mentioned the current magazine and the cover image. Many people wanted to know she said what was the wall color , oh it is in my records some where or I will have to make up a name she continued. MAKE UP A name did I hear her right.... it was painted a while ago the room is in a woodland retreat... is that Bedford or skylands???? perhaps you have an idea of the name to the blue in the bedroom..... I had to laugh she is constantly "reinventing" herself yet her "old" self decisions of the past "haunt " her lol

Your followers are outstanding in channeling MS. I think those of us that have embraced her "jam" naturally were inclined to be creative but did MS make it so. She was an influence before insta-gram ( Alexis made MS an Insta- GRAM) lol