Martha Stewart Living 2018: The Year That Was

I thought I would start out the New Year with a look back at the year that was in the world of Martha Stewart Living magazine. I've been doing this annual review for some years now and I'm always interested to hear how you feel also, so please leave a comment with your opinions about the magazine.

My general assessment for 2018 is that the magazine is hitting a new stride. Under the guidance of editor-in-chief Elizabeth Graves, I think the magazine has found its 'new voice' but has still managed to maintain the classic hallmarks of pre-2005 issues - a period in the magazine's history that is most beloved by longtime readers.

The magazine certainly did go astray in past years, trying to be something other than what it was meant to be: 2013 to 2015, inclusive, were particularly disappointing years for me. The covers became cold and almost random with their lack of styling. The content inside was weirdly off-brand in many cases (a feature article on Botox was very ill-advised) and I noticed spelling errors, grammar errors and what felt to me like a general lack of effort and inspiration from the editorial team.

Every brand goes through its highs and lows, of course - you take the good years with the bad. In 2018 I was quite impressed with the magazine. Some of those old feelings came back: looking forward to seeing each volume on the newsstand and in my mailbox, setting some time aside to read the articles and simply looking forward to the pleasure of turning the pages. 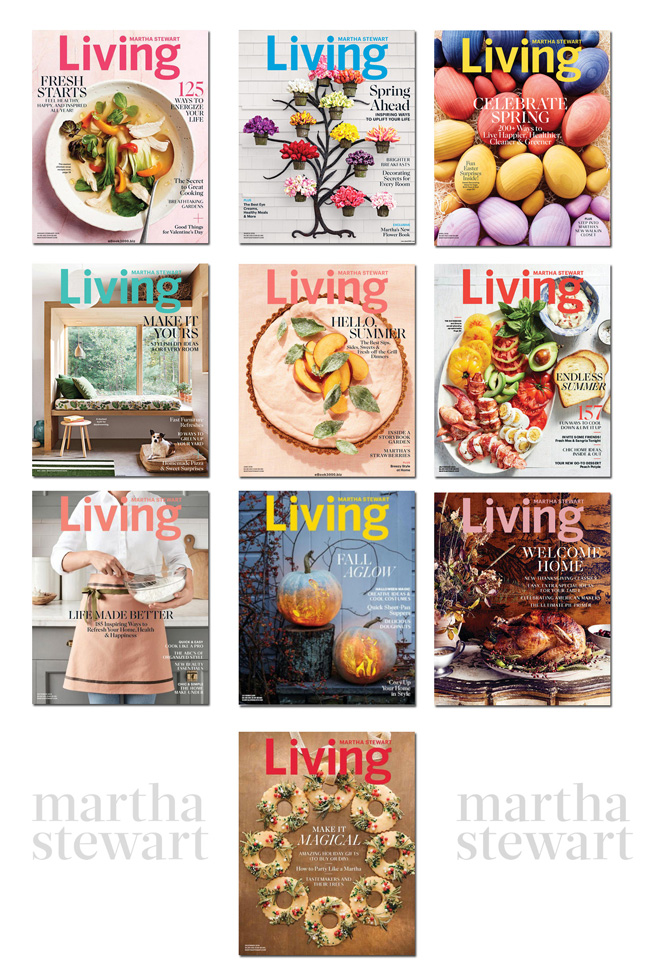 The covers were a real triumph this year. They've recaptured their magic. The new creative director and art director (Abbey Kuster-Prokell and James Maikowski, respectively) have really taken the time, it seems, to reevaluate what makes a good "Martha" cover: thoughtful styling, imaginative composition, a photograph of something inspired and considered and brilliant. 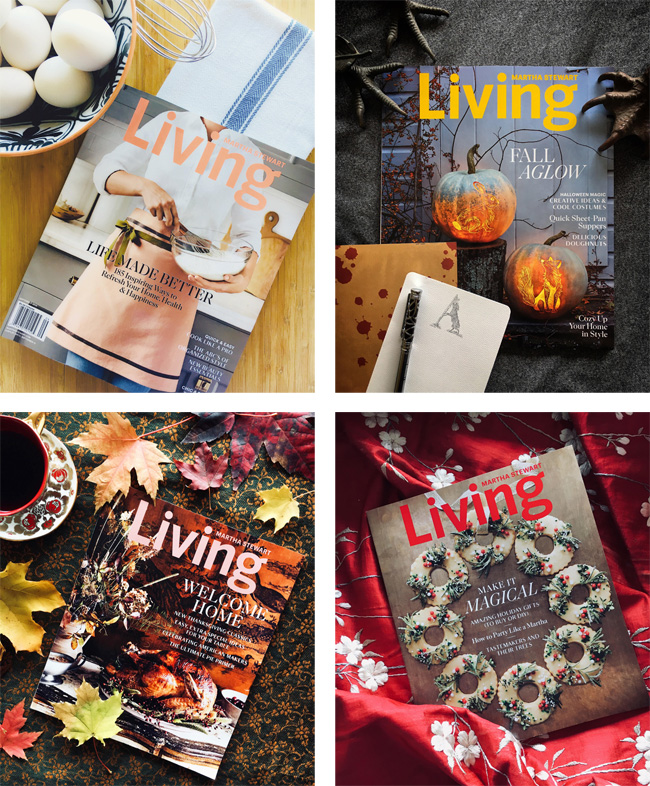 Highlights for me included the September, October, November and December issues. Each one maintained a level of elegance without feeling staid or old fashioned. Having a person on the cover (other than Martha) is a rare occurrence for the magazine, but the cover of the September issue (top left) felt fresh and new and exciting. The October cover felt perfectly moody and dark; November felt homey and quaint but the modern flower arrangement kept the look updated; December with its wreath of wreath cookies was sublimely simple but so impactful, reminiscent, actually, of some of the Martha by Mail catalog covers. 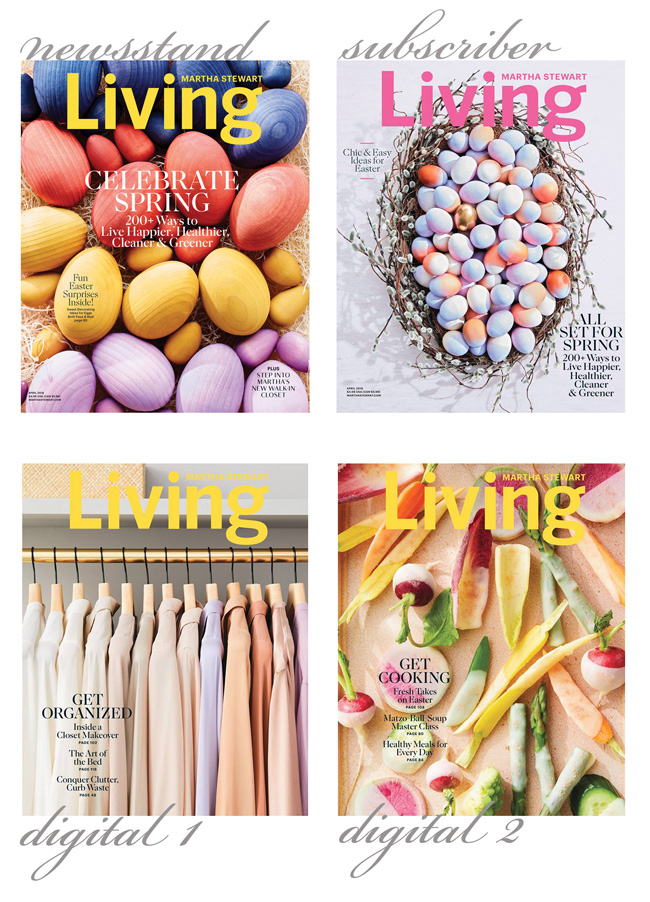 The cover(s) of the April issue was another standout for me. Four covers were issued and each one was beautiful in its own way. The newsstand cover (top left) was my personal favourite but the subscriber cover (top right) was also lovely. (The lower two covers were used for the digital version of the magazine and were included as alternate cover pages in the original magazine). Experiments like this hint at a magazine that still knows how to play and have fun and it was a nice thing to see.

The April issue also saw the launch of a great new initiative called Change the Day, bringing into focus environmental issues and 'change makers' that help the world become a better place in which to live, in one way or another. I really liked that push. 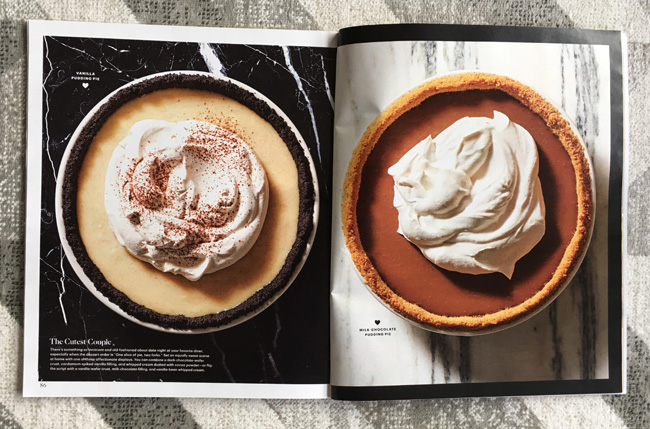 Inside the magazine, too, there were subtle design elements that really stood out to me. In the feature "Chocolate hearts Vanilla" for instance (from the January/February issue) the layout was superb with its contrasting black-and-white borders and backgrounds. It was very visually arresting and, again, it shows the editors care about how they present their ideas and creations.

As for the content itself, the magazine seems to be returning to its original core-content areas of expertise: cooking, crafting, gardening, decorating and homekeeping. During what I call the magazine's 'drought' the editors abandoned many of these subjects in various issues, leaving readers such as myself, disappointed. I like knowing that each issue will include a feature on each of those subjects. Now, the magazine has reintegrated those lost content themes in a fairly significant way.

There were three features on sewing in 2018, for instance; the January/February, May and November issues all had features about sewing projects, signalling a return to crafts. Almost each issue, too, contained a gardening feature and the editors took the time to keep those features regional, ensuring that gardens from the east to the west, from the north to the south were included for its readers. 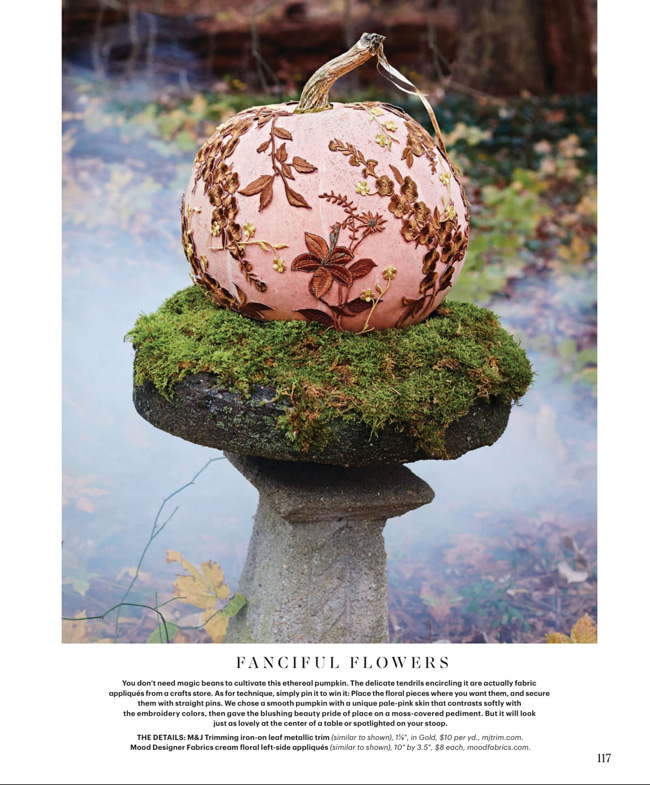 Even the Halloween feature in the October issue wove a sewing element into a pumpkin-decorating project. 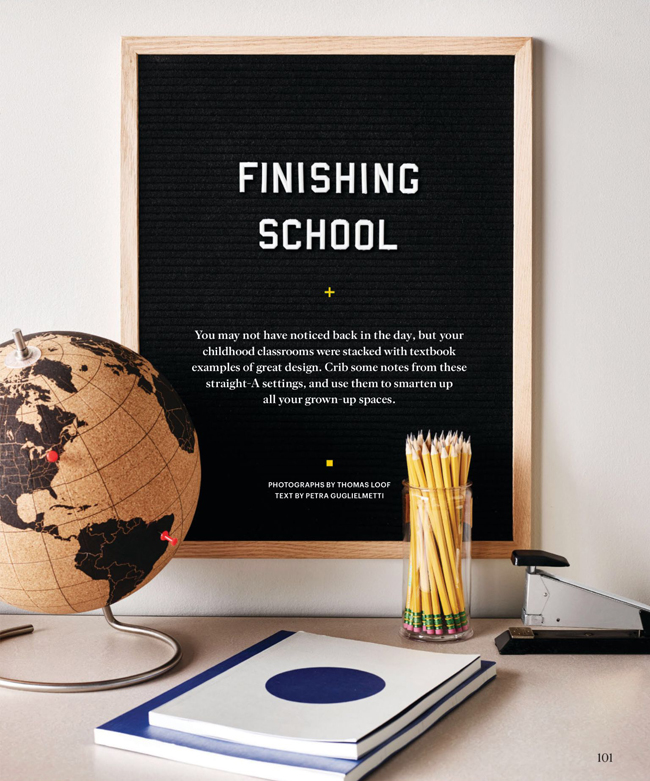 Decorating, too, came back in a big way at Martha Stewart Living this year. In some issues there were several decorating features. Among my favourites was "Finishing School" from the September issue, which used a pared-down schoolroom as inspiration for its decorating suggestions. It was a brilliant way to integrate a theme traditionally associated with the month of September: the return to school with a grown-up and modern approach to styling a home. Thoughtfulness. I really do appreciate thoughtfulness! 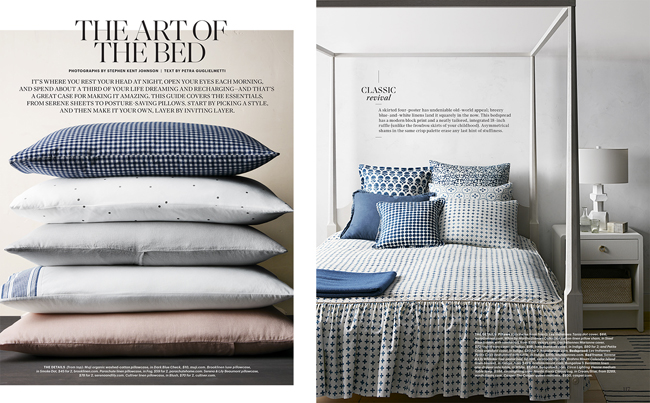 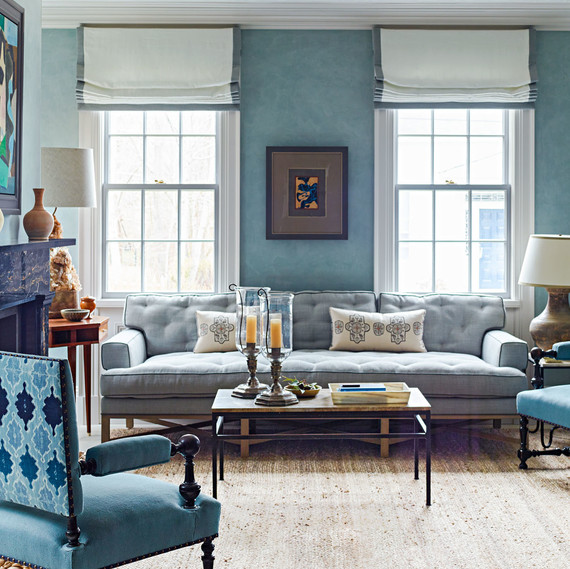 I must also say that I've been very impressed with the Everyday Food section of the magazine of late. Sarah Carey is doing an excellent job as the magazine's food editor and so many of the culinary creations that have come from the magazine in 2018 are keepers for me. Below are three standouts from the magazine that I personally recommend. (Yes, they're all desserts. Did I mention I have a sweet tooth?) I have tried each one and can personally recommend them as successful, delicious additions to your recipe repertoire. Click on the links below to access the recipe online. 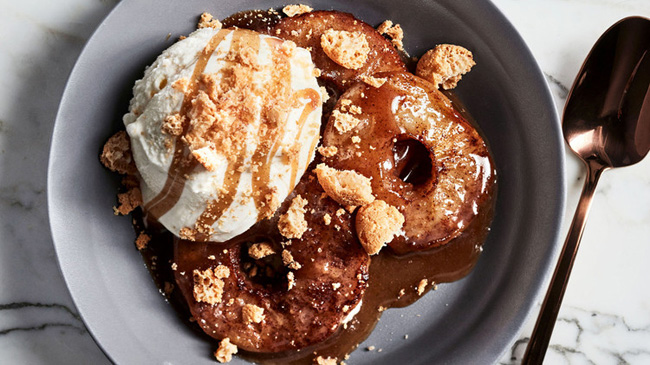 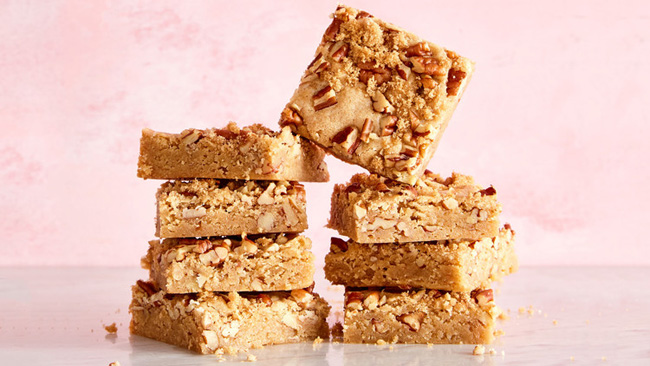 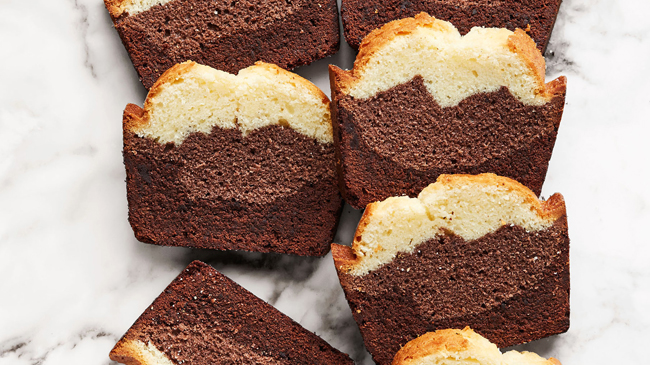 I feel the magazine's food department needs to come up with another cookbook compilation of the magazine's recipes. It's been over ten years since the two volumes of "The Martha Stewart Living Cookbook" were published and there have been so many excellent recipes published since then. Dear food editors...please make this happen!

One note of constructive feedback I would give this year would be to scale back on the buying suggestions and beef up the making suggestions. In many of the magazine's features there are notes on how to buy the things in the photographs.

A perfect example would be the article "Trace Elements" from the May issue.

I was really inspired by that article and I was excited to go to marthastewart.com to download the stencil templates to try one of the projects myself, as I had done in past issues that had used templates for their projects. These templates, however, were for sale by a vendor - and were actually quite costly - putting my desire to try the project securely on the back burner. I miss those free PDF templates that the editors used to create to make it easier for the reader to recreate the craft projects from the magazine. I'd love to see those return.

Each year, too, I somewhat lament the inclusion of the beauty section in the magazine. I suppose as a male reader it simply doesn't appeal to me but I'm sure there are thousands of women who read it word for word. To me, however, vanity never really had a place in Martha's magazine. The idea of Living was not so much about the appearance and style of the person doing the living as it was the lifestyle he or she wanted to create around her. The goal was to teach and inspire both men and women and the approach was genderless. I do recognize that part of 'lifestyle' includes health and wellness and that those subjects, in turn, include feeling good about one's appearance and aging well. It's just a personal thing, but I really don't like reading about beauty products in Martha's magazine. It's the piece of the puzzle that doesn't fit for me.

Overall, the magazine improved greatly in 2018, in my opinion. I felt that I enjoyed it more and was impressed by most of the content, which then made me look forward to the next issue: a very enjoyable place to be as a reader.

What are your thoughts?
Posted by ANDREW RITCHIE at 10:27 AM

When will the January 2019 issue be released? I can't find it anywhere, including her own app!

Hi Jennifer! It’s out on the 14th because it also includes the February issue. It’s always a bit later for that reason.

I love how you put this post together Andrew, always interesting and inspiring.
I loved the December issue and looking forward to a more successful 2019 issues
Happy New year xo

I agree about the beauty section. I've been a subscriber since 1998 and nothing about recommended makeup appeals to me in this magazine. I'd rather see more inspired ideas for cooking, crafting, raising animals, back to basics skills etc. Generally I like all the content but the makeup section has to go!

Just got the March 2019 issue. Feel very disappointed, as the magazine appears to have lost its specialness. The quality of the paper is thin and cheap, the cover cluttered, and as I leaf through it, it seems like a generic "Better Homes and Gardens" publication rather than the quality, creativity, artistry I am used to from Martha Stewart. I feel sad that the magazine has cut so many corners.