The Gardens at Lily Pond Lane

I've wanted to blog about the gardens at Lily Pond Lane for some time now. They have always inspired me, mainly because of the somewhat restricted parcel of land upon which they were sown: just one acre, which is decidedly small considering Martha's other two properties, Cantitoe Corners and Skylands, are 153 acres and 65 acres, respectively. Martha worked wonders and made the grounds feel so much larger than they actually are. I love her use of form and texture and the ingenious way she created destinations and 'garden rooms' to keep the wanderer interested. The photographs below are all from The Martha Blog. Gathered over a period of time, the photos illustrate the beauty of the grounds during the spring and summer months, which is when Martha spends most of her time there. 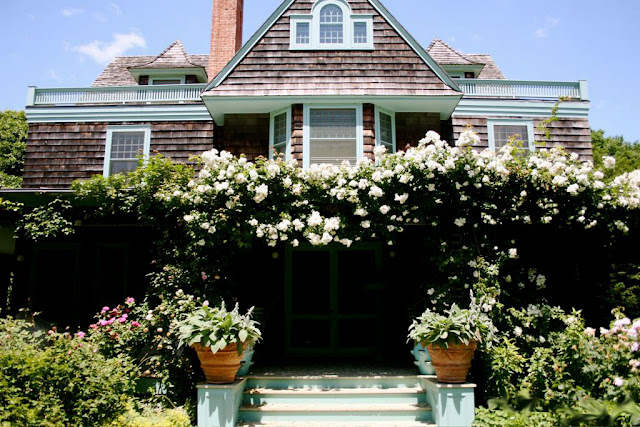 A few years ago, Martha made the decision to remove the signature teal trim from the house's facade (shown above), something a lot of Martha's readers were initially disappointed by. She replaced it with a more subdued shade of taupe and had the entire facade re-shingled. She also removed many of the climbing rose bushes from the front of the home (also shown above) and transferred them to her estate in Bedford, New York.

The photos you see below are a mix of newer photos with older ones, hence the differences in paint colours on some of the trim. I've structured the "tour" to begin in the front and finish at the back. The photos have been placed in logical, linear order to maintain a kind of compass point. I hope you enjoy this look at the gardens of Lily Pond Lane! To read more about this house, click here. 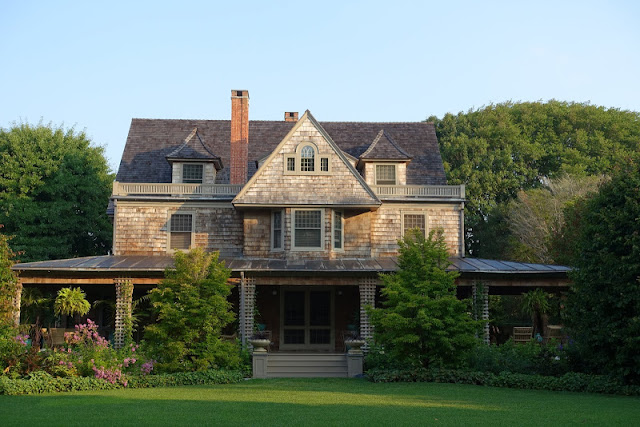 Martha's summer residence on Lily Pond Lane in East Hampton, New York, was built in 1873 and sits on one acre of land. The new facade features a more neutral palette and the climbing roses were replaced with clematis vines. 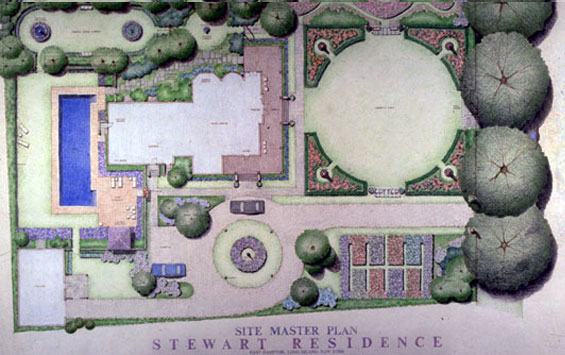 This is the original master landscaping plan for Lily Pond Lane, completed in the early 1990s, shortly after Martha purchased the property. The landscape was not carried out completely as it is showcased here, however, and several design changes were made. Still, the plan shows the basic structural layout of the gardens on the property and is a good reference guide. 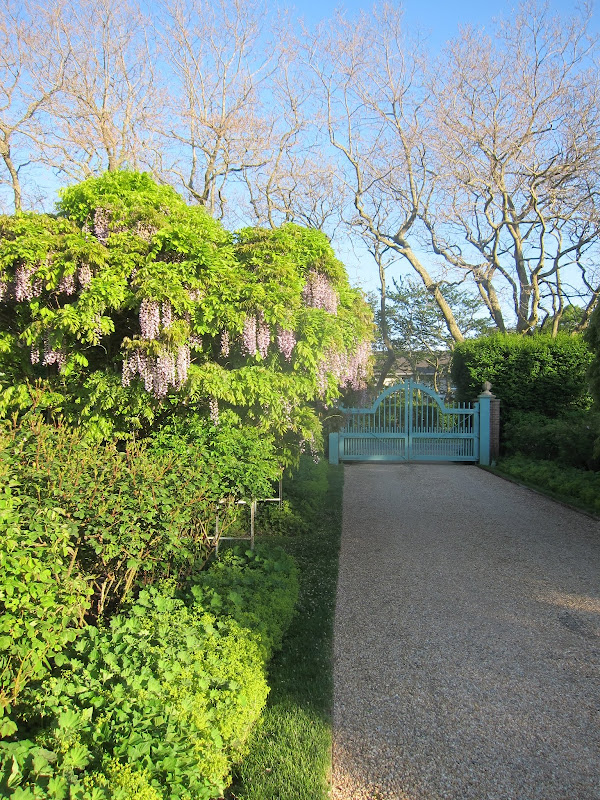 A view of the driveway looking towards the street. Martha's design for the gate is an identical replication of the one she designed for Turkey HIll. The driveway is covered with a soft pea stone gravel and is lined on one side by shrubbery and wisteria. 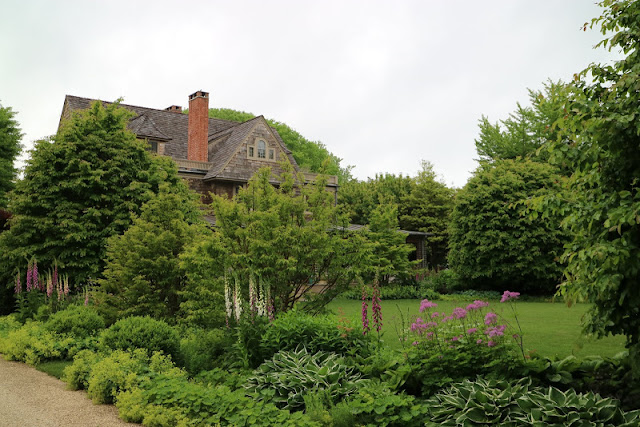 A view of the house from the driveway gate. 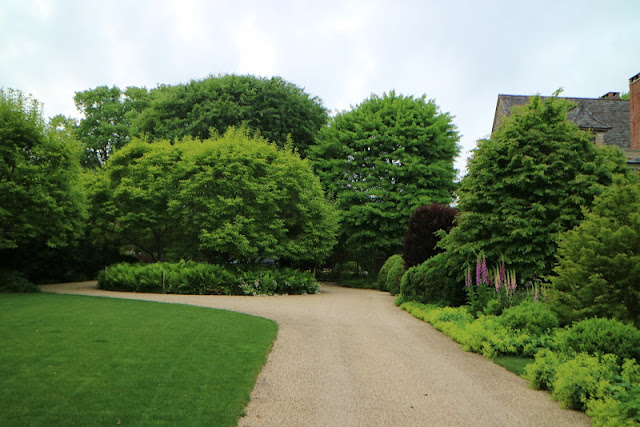 Another view of the driveway, looking towards the house. You will notice in the landscaping plan above that the area of lawn shown in this photograph was originally designed as a formal cutting garden with several flower beds. 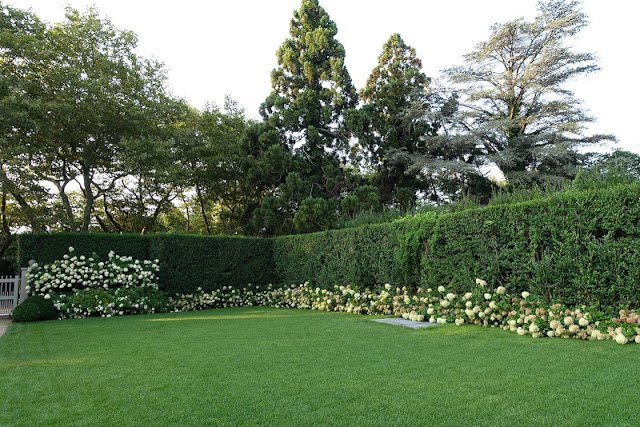 Another view of the same side lawn, originally slated to be a cutting garden. Martha kept it as lawn to accommodate large summer parties. The front and side of the property are hedged with privet. 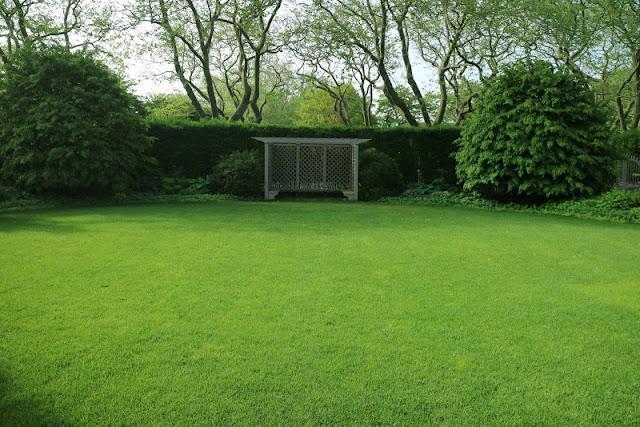 This is a view of the circular front lawn, looking towards the street from the porch of the house. Martha designed and built the arbor when she purchased the property in 1990. 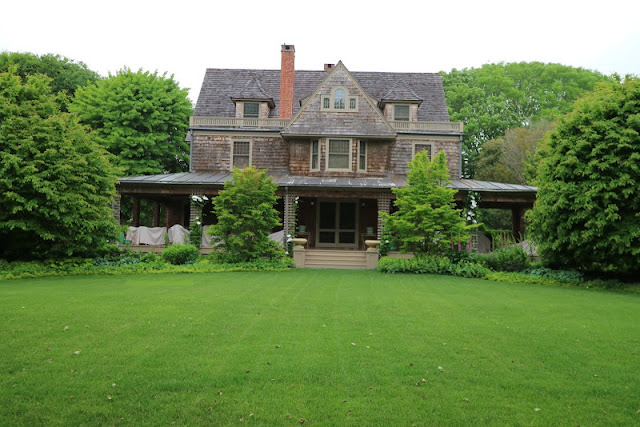 Another view of the house, looking in the opposite direction, from the arbor. 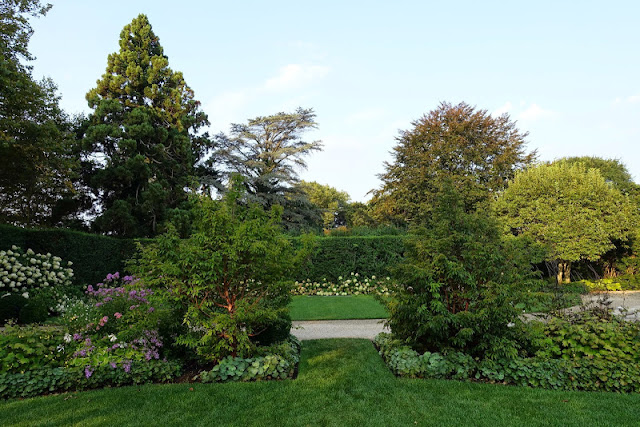 Standing in the center of the circular lawn, looking towards the driveway. 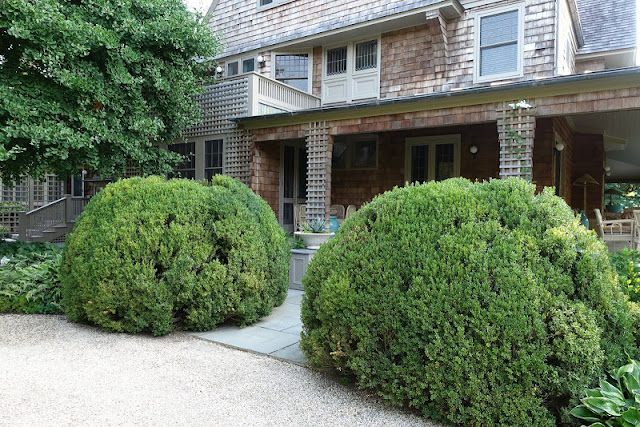 Where the driveway meets the house, with access to the porch. 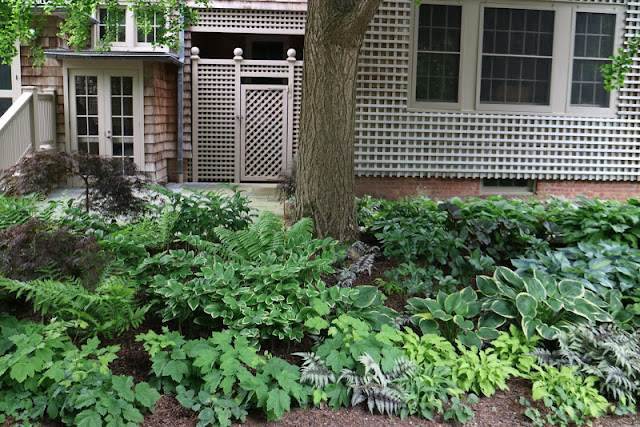 Further along the driveway and the side of the house 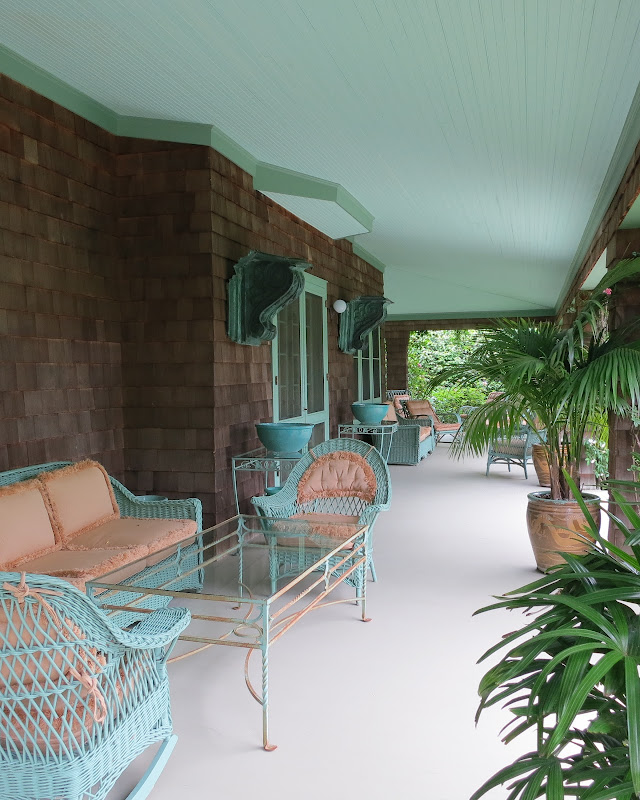 The front porch is a lovely place to relax. In the summer, Martha fills it with lush tropical plants. (The teal was replaced with a warm taupe.) 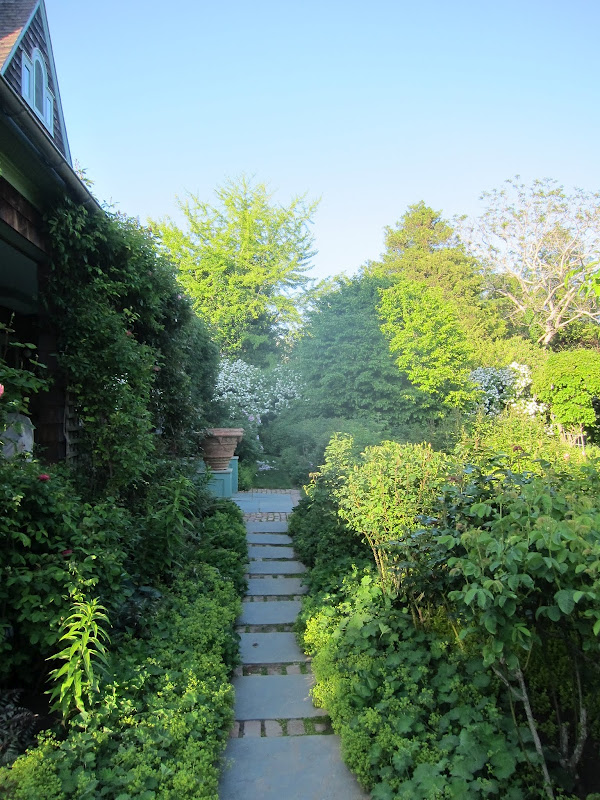 This small pathway leads from the driveway to the front steps of the porch (at left) and the circular lawn (at right). 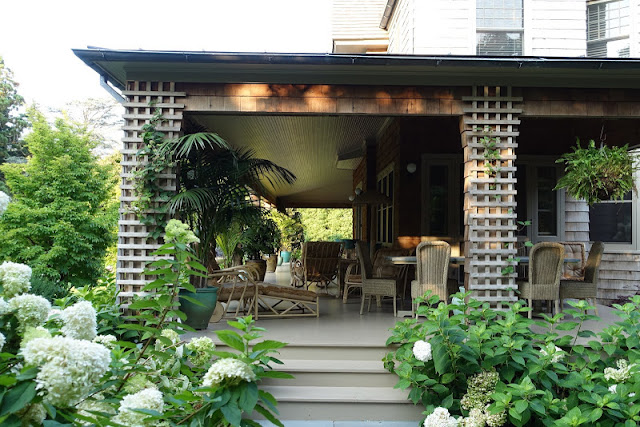 The opposite side of the porch with steps leading to a network of pathways that lead through the shade gardens. 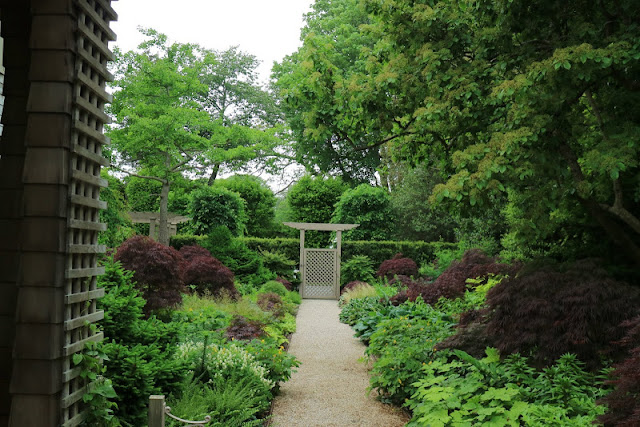 One of the paths in the shade garden. The use of dark Japanese maple trees is striking. 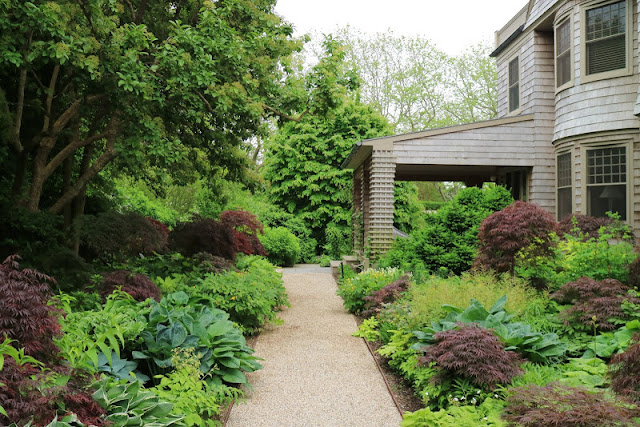 The same path, looking in the opposite direction towards the porch. 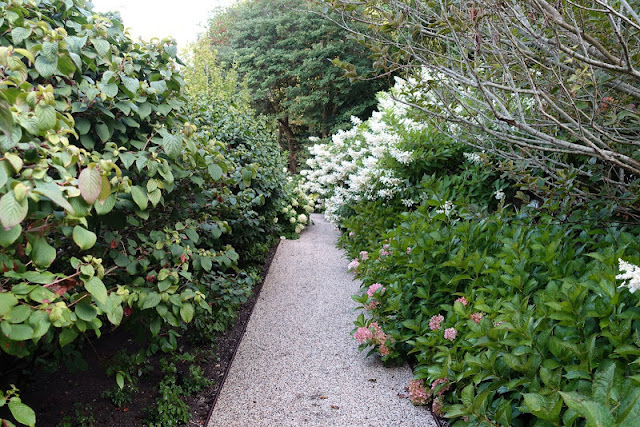 Another portion of the pathway. The network of small 'garden rooms' makes the property feel much bigger than it is. 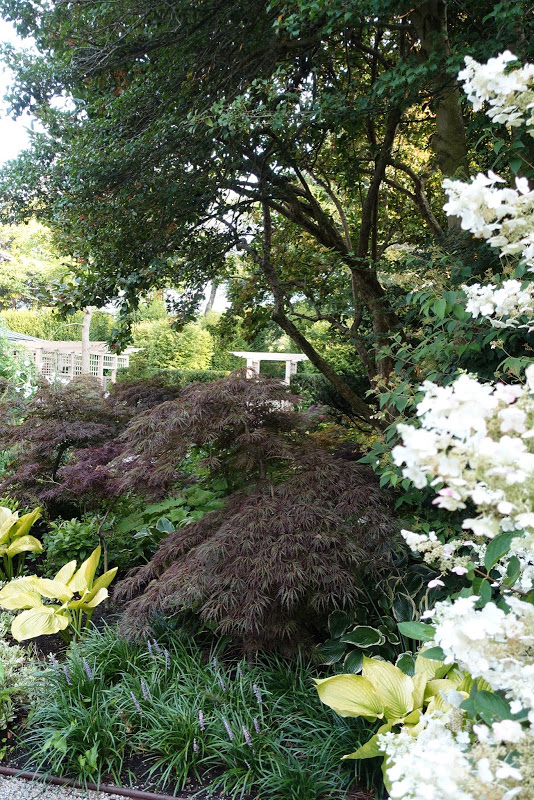 Martha's use of shade plants is extremely painterly and poetic. The balance of texture, colour and shape is beautiful. 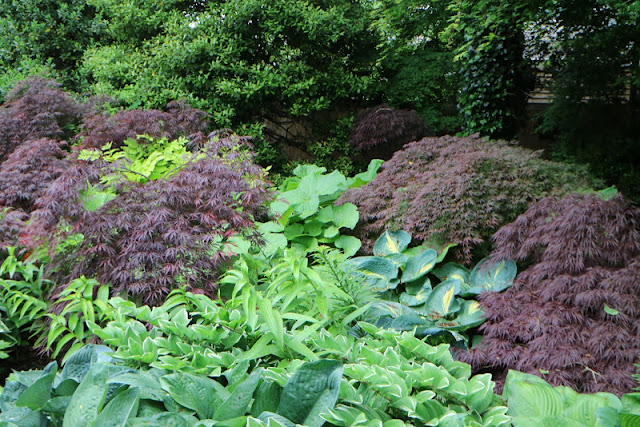 Hostas play a large part in the planting scheme at Lily Pond Lane. 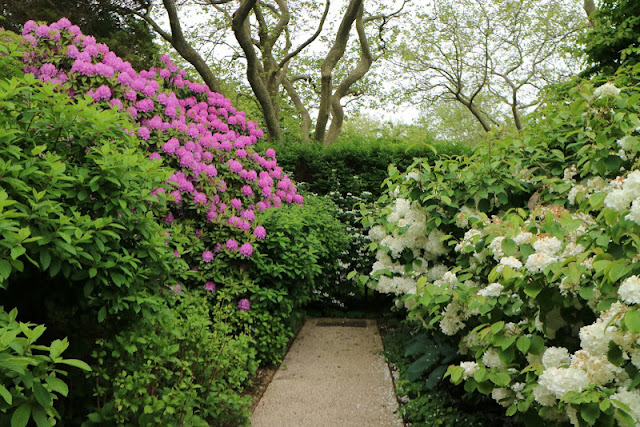 Rhododendrons and hydrangeas also figure prominently in the design. 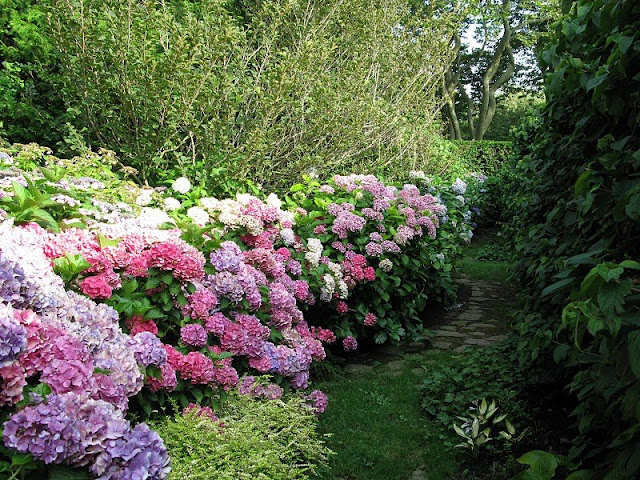 Hydrangeas along the garden path adjacent to the circular lawn. 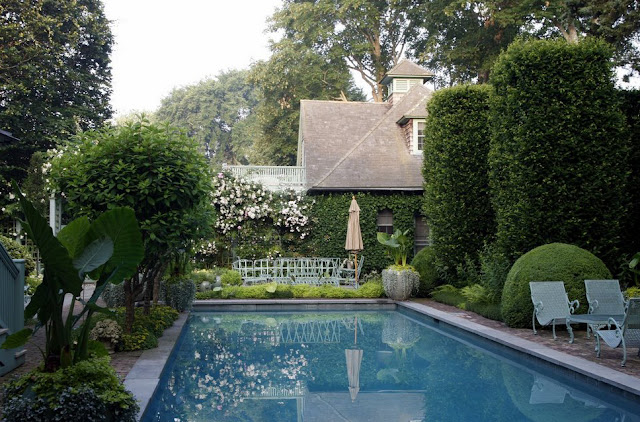 At the back of the house is the pool. Alexis Stewart's guest cottage is shown in the background. 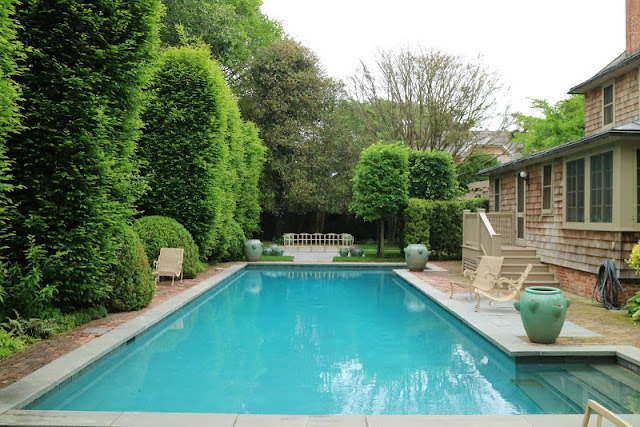 A view of the pool from the guest cottage, looking in the opposite direction. 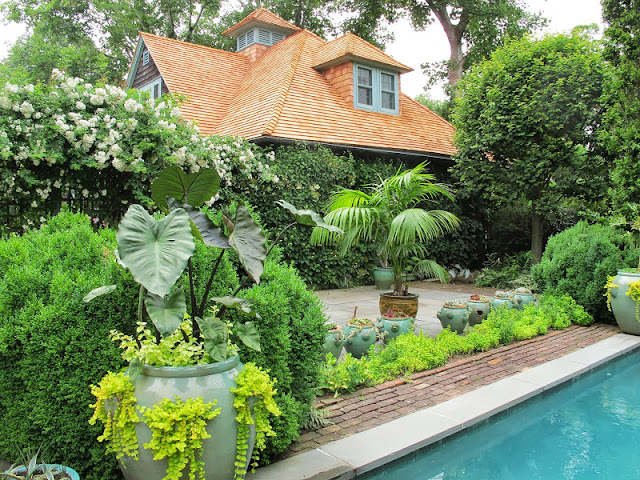 Another view of the guest house from the corner of the pool. 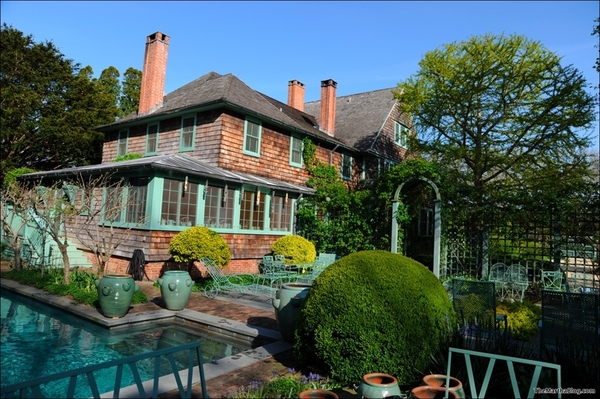 Looking towards the back of the house from the same vantage point.
Posted by ANDREW RITCHIE at 10:10 AM

The shade plantings are amazing, in particular the lush look it has achieved. I am one of Ms Stewart's fans who believed the teal gave her home a more summer house feel.
APM

This is my favorite Martha property. I wish she showed more of it.