The other day I realized that it had been ten yeas this month since I began this blog! I had to pinch myself because I simply couldn't believe that an entire decade had passed! When I sat down to reflect on it, I became somewhat emotional when I realized just how much this blog had changed my life. It has given me such wonderful opportunities and experiences and, most important of all, it has helped me make new friends and meet like-minded people from all over the world, a community of Martha Stewart fans and readers from all across the Unites States and Canada to Israel, Kuwait, Scotland, England and Japan. The blog really has helped shape who I am.

Below is a little summary of some of my most memorable Martha Moments - a journey through the last decade of Martha-related experiences. Some of them were very grand and exciting and some of them were quieter moments. I want to first say, however, a huge thank you to my friend Kenn who has always been a champion of this blog and such a big help to me over the years. It is largely because of him that this blog began! I also want to thank every single one of you who makes Martha Moments a part of your life. I have tried to make it interesting and informative for you. It has been so much fun getting to know everyone! Enjoy the little trip down my Martha Moments lane!
With love,
Andrew
xo 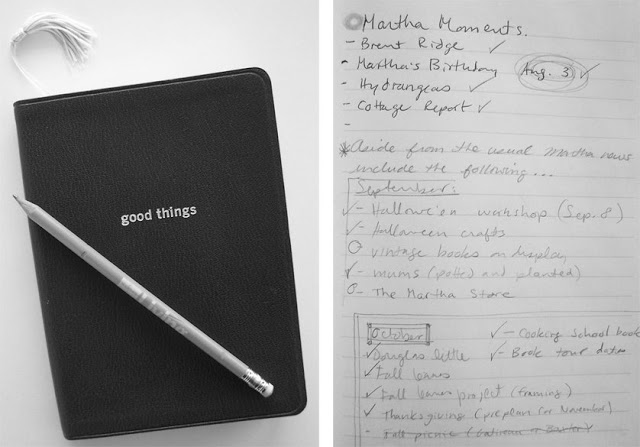 Kenn gave me this beautiful Good Things journal from Martha by Mail. It was where I first began to jot down ideas for my blog and I still do! The Martha Stewart Living pencil was also a gift from Kenn. I've stopped using it because I don't want to sharpen beyond the logo! 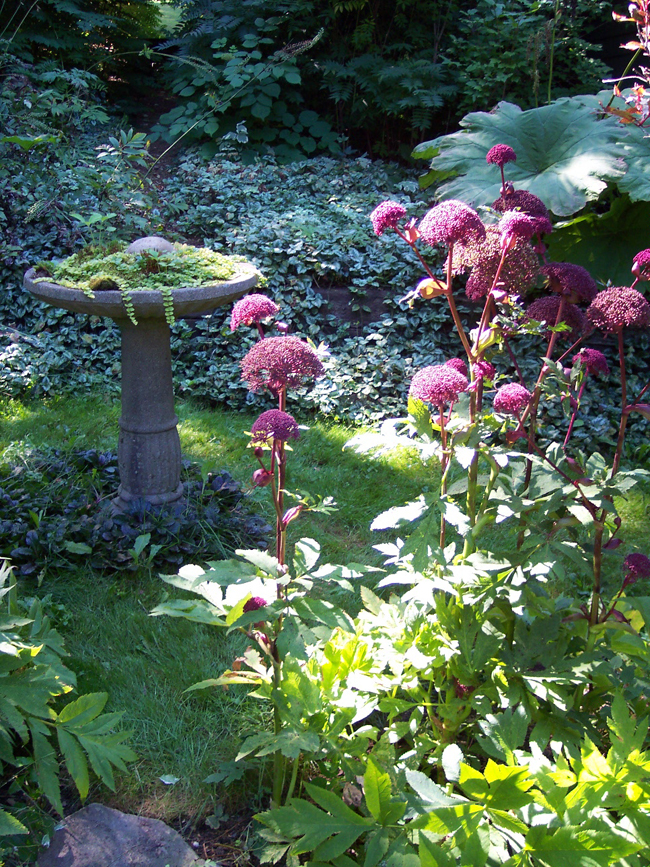 One of my first Martha Moments, in 2005, was visiting Margaret Roach's garden in Copake Falls, New York, as part of the Garden Conservancy's Open Days program. At this point I had not started the blog, but had been working with SaveMartha.com. I drove with my Mom from Ontario to New York to visit her garden for the day. At this time she was still editor-in-chief of the magazine. You can read more about it here. 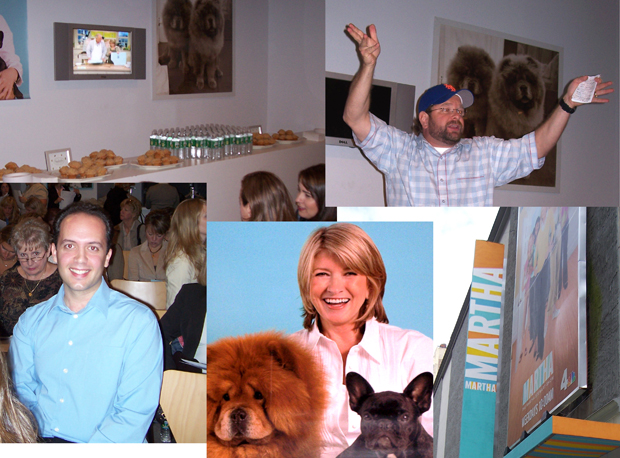 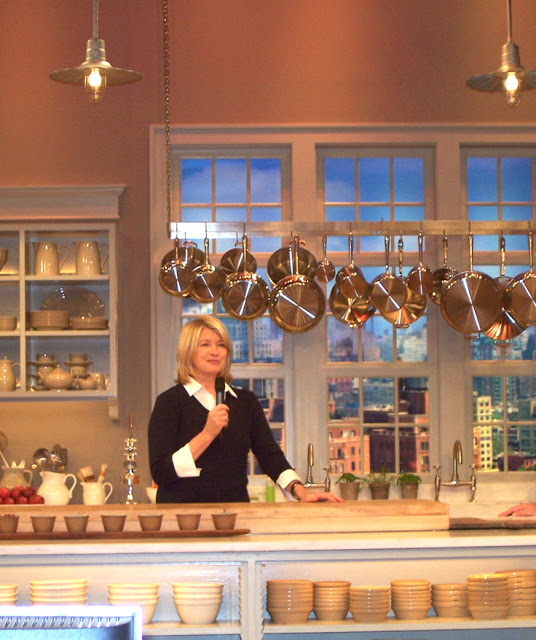 The following year, I made it to New York to be in the audience of The Martha Stewart Show. By this time I had started the blog. The show was part of a special 15th anniversary celebration of their company and only the first 150 people to buy tickets made it to the show. As part of the ticket, you also received entry to a special event the following day at Pier 94 called "The Good Things Event" where the magazine editors would host seminars and workshops. 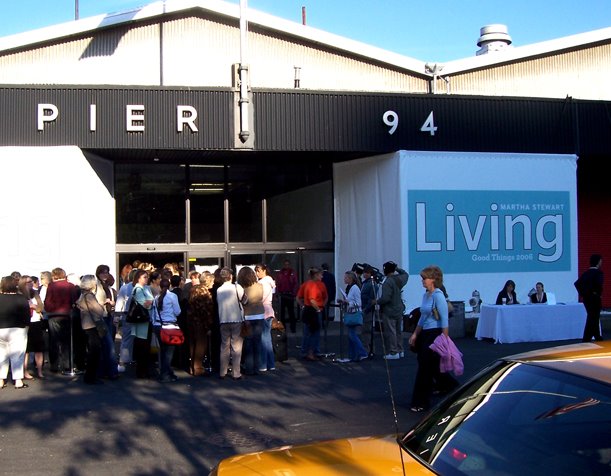 So many people turned out for this event! It was packed inside! 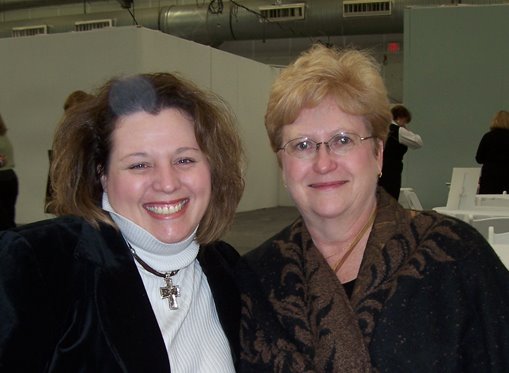 These two lovely women, Christine and Joyce, from Nebraska adopted me right away and were my friends for the day. They were so very sweet! I am still in touch with both of them. 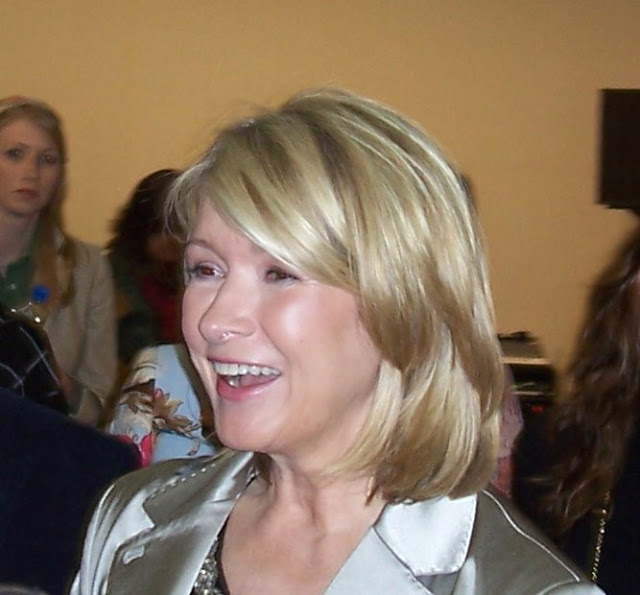 This was the first time I met Martha. It was a very brief encounter, but I was able to tell her that I had come down from Toronto to attend. She smiled, welcomed me and thanked me for coming. Little did I know, four years later I would be a guest on her television show! 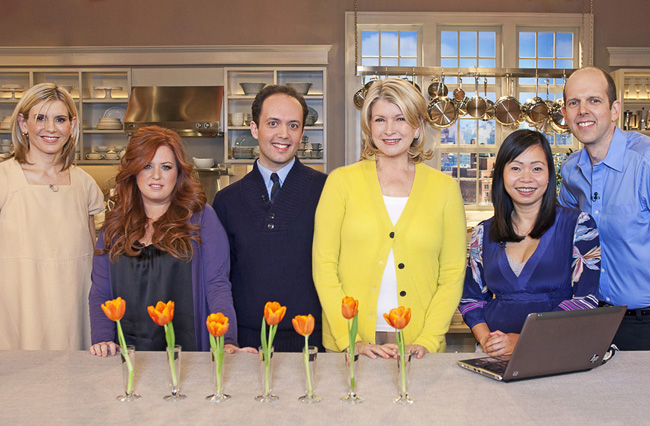 I'll never forget the day I received an email from the assistant of producer Lenore Welby - a woman I had remembered from her appearances on the Martha Stewart Living show and whose mother I had become acquaintances with through my work with SaveMartha.com. It was so exciting to hear that they wanted me to be a guest on a show about blogging! I set up an appointment to speak with Lenore and before I knew it I was booked! The show taped in New York on January 14th, 2010, and was aired live. I got to meet so many people that day, tour the studio from top to bottom and interact with Martha. It was truly one of the most exciting days of my life. 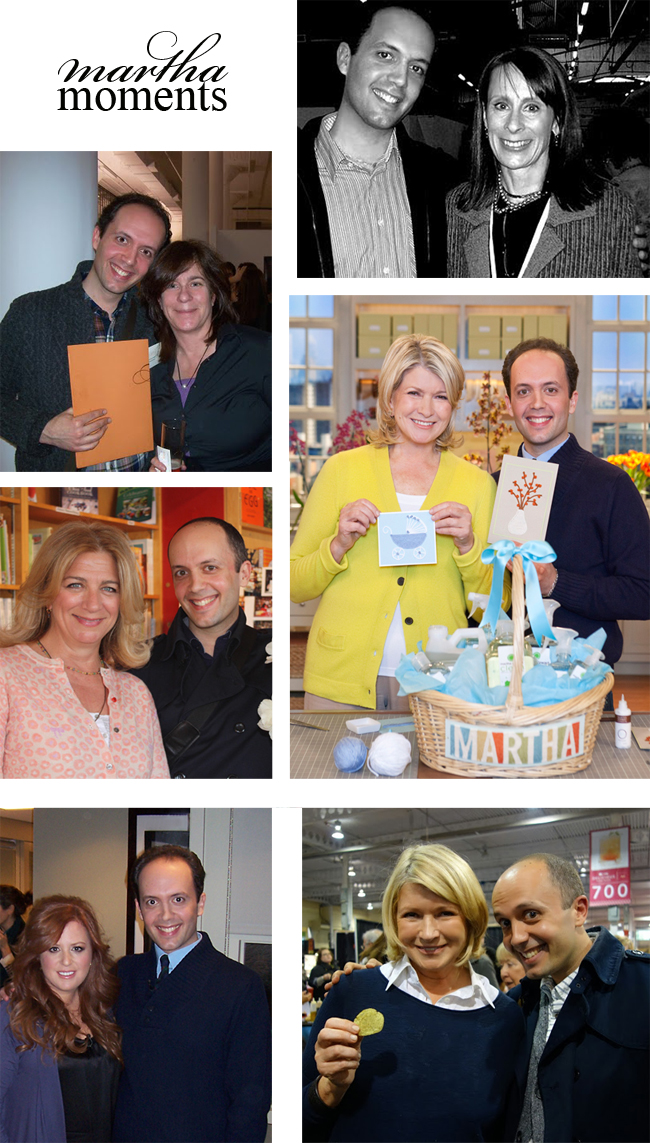 I've been fortunate to have met Martha on several occasions, as well as many of her editors and colleagues, including Margaret Roach, Hannah Millman, Lucinda Scala-Quinn and Jennifer Koppelman-Hutt. The biggest treat of all, of course, was being a guest on Martha's show in 2010! You can see the segment here. 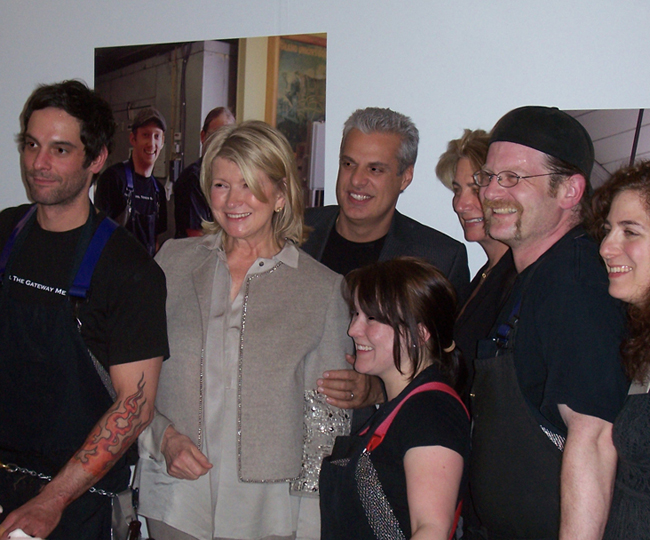 A few months after my appearance on her show, I was invited to attend an event at Martha Stewart Living headquarters in Manhattan - a gathering of the magazine's favourite vendors and suppliers called the "Tastemakers Event." It was so interesting to visit this beautiful building and see Martha again. 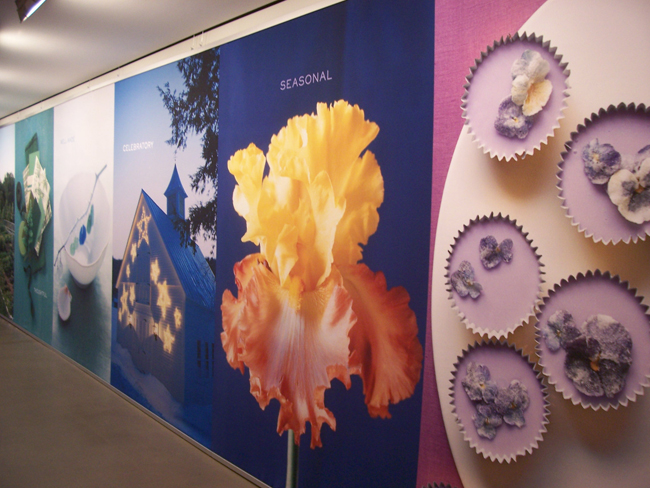 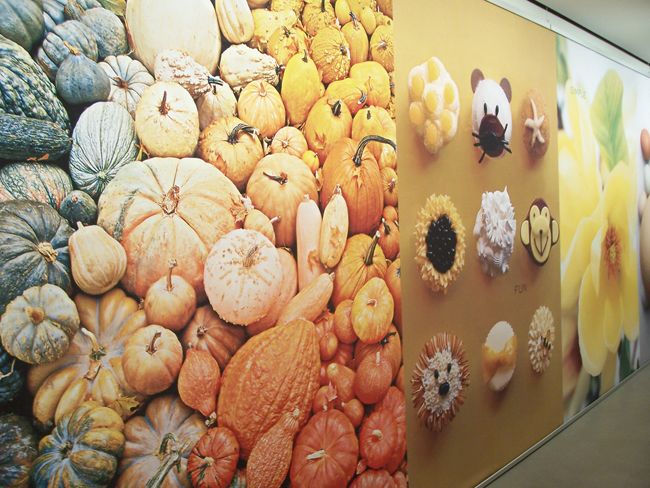 After passing through the lobby, guests are led down a long corridor flanked on both sides with giant photographs from the pages of Martha Stewart Living magazine. Walking down this hallway was like visiting Oz! 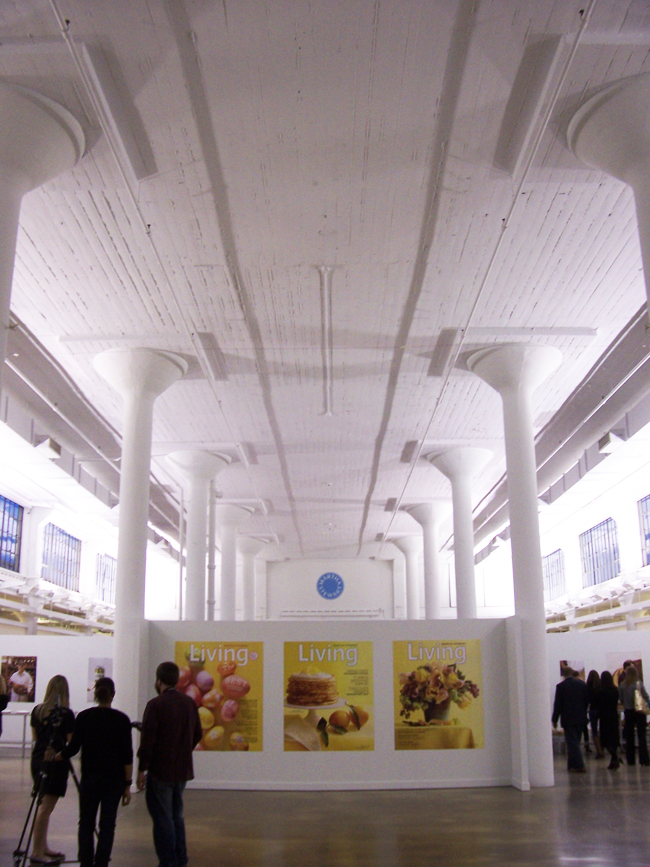 At the end of the hallway is the vast clerestory with its huge pillars. It was a true Martha Moment seeing this for the first time!

The design of the blog has always been fun for me. I keep it very simple and uncomplicated, but do enjoy making a new header each month. The heading designs have changed quite a bit over the years. I began with a circular logo using the "Fling" font, which was used in Blueprint magazine. The circle was a reference to Martha's new logo and the font was a reference to her latest magazine. I always used imagery from Martha's magazines and books as backgrounds. 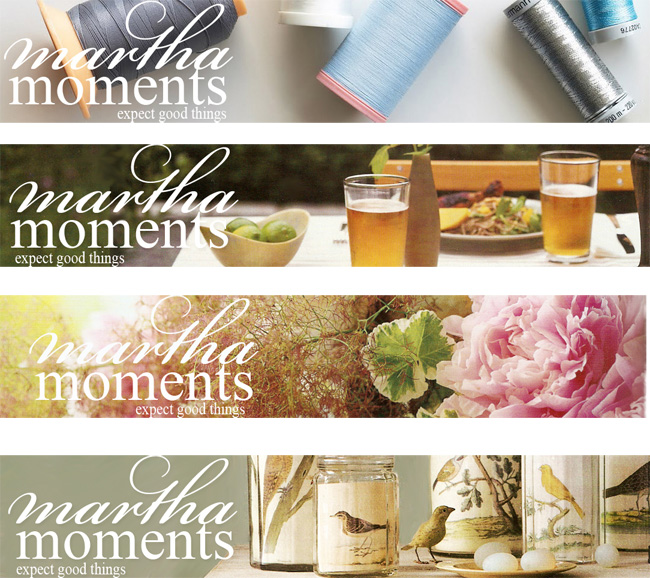 I elongated it in 2012 and began to mix fonts, using "Bickham Script" on top and "Times New Roman" on the bottom. 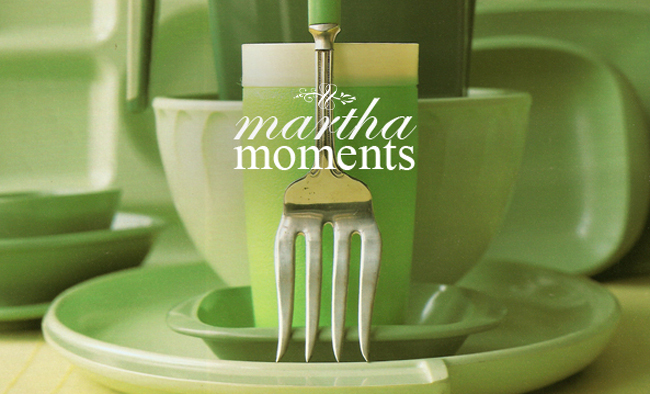 In 2013, I made it bigger but more refined, using "Edwardian Script" font on top.

I then went smaller again and returned to the Bickham font. 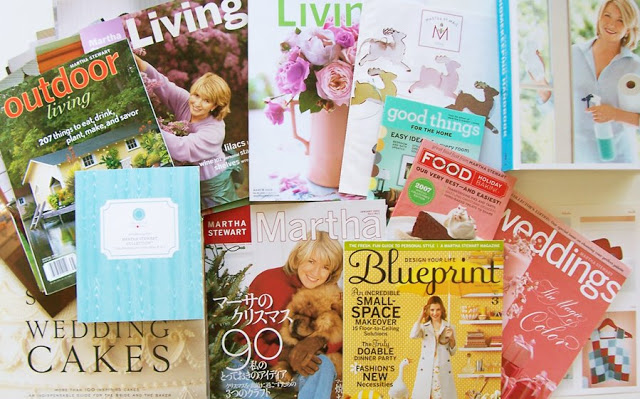 Like so many of you, I collect Martha Stewart magazines and books voraciously! While I don't have everything, I am quite proud of my collection and have pared it down over the years so that it reflects only my favourites. 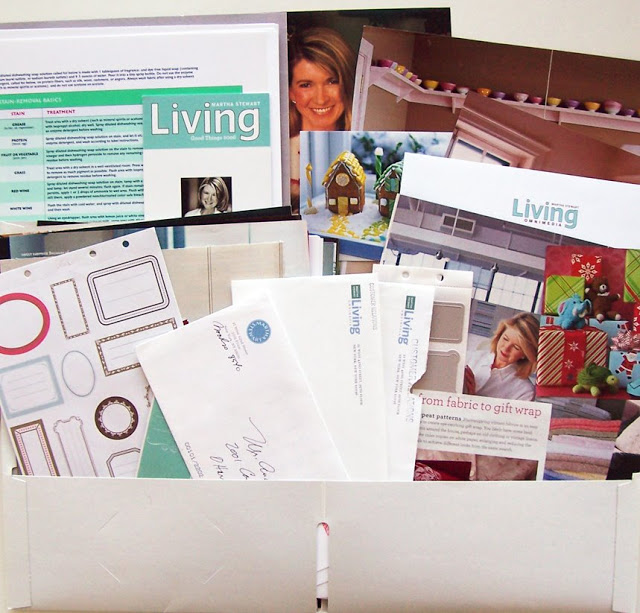 I have folders and folders filled with magazine clippings, articles, press releases, brochures and correspondences from Martha's editors. It's all part of a blogger's arsenal of ideas and research!
Posted by ANDREW RITCHIE at 9:30 AM

I'm thinking that this post could be considered your digital scrapbook - good job and very interesting. Seeing as how I'm not very computer savvy, I really do enjoy seeing what others do. And being a scrapbooker myself, I can appreciate the work involved in deciding what you want to include. It can become quite time-consuming to sort through things...this was a very nice overview. And thank you for all the reminders of "good things".

I'm so very proud of you. I have loved being a part of Martha Moments over the years. Oh, the "Save Martha" days.. I remember them well. Here's to at least another 10 years! xo

congratulations! you have done an amazing job. i read your blog even before i read Martha's. some of my favorites are your pictures of your family holidays. and your christmas "secrets" on gift wrapping and the series you've done on Martha's homes. my goodness, guess i love just about everthing you've blogged. thank you for sharing so much with us the past 10 years!
vicki (from alaska)

Thanks everyone so much! Vicki, your comment really warms my heart!

Congratulations, Andrew! Martha Moments is one of my favorite websites, and you do a wonderfully amazing, terrific, fantastic job. Please don't even think of stopping blogging again! Louise, from Sydney, Australia

I want to thank you for all your efforts ....they are remarkable and very much appreciated!
APM

I have to admit the housekeeping approach martha advocates has reached some. The yard sales I visit the thrift shops and estate sales have a certain percentage of broken worn out items. Why in heavens name people think they can sell that stuff in that condition is beyond me. Would one say the mike american picker wolves that like the grunge and the toasted condition of things prevails? My interior needs some TLC and I do turn to MS for advice.

Hi Andrew,
So sorry been away for quiet sometime, traveling. Happy 10th anniversary to one of my favorite bloggers, I hope one day I will be able to meet you and thank you personally for an amazing blog. Wishing for another 10 successful years to come. Thank you for a beautiful and inspiring blog.
Best wishes xoxo