Imagine mixing the ingredients for a loaf of bread in a big pot and then planting it in the dirt to bake. In several parts of Iceland, this is exactly what the locals do! The natural geothermal energy of Iceland's landscape, which is caused by its volcanic conditions, is used to heat the homes and buildings there. In many of the country's 'hot spots' where the earth can be heated to more than 100 degrees, the conditions are perfect (coincidentally) for baking rye bread. On a visit to the Laugarvatn Fontana Spa near Thingvillir, Iceland, we were treated to several slices of this deliciously sweet bread. Below is the recipe along with several photographs of the loaf we enjoyed at the spa. 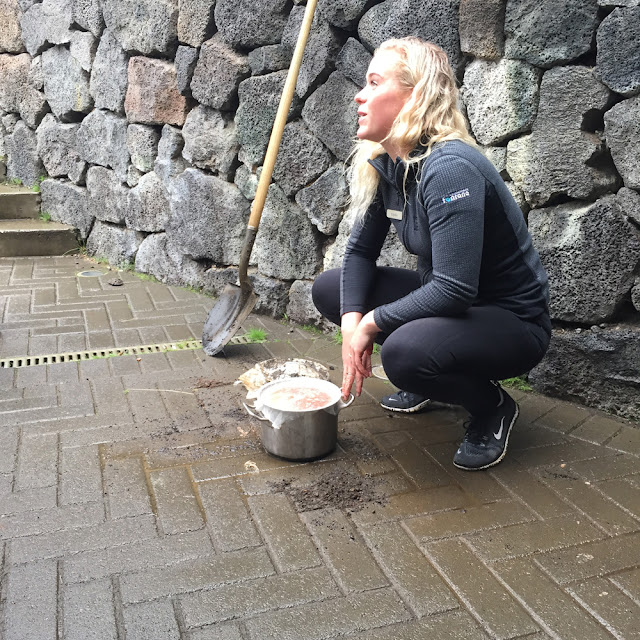 Not far from the spa was a black beach with steaming water lapping up on its shores. This is where the 'geysir bread' is buried to be naturally baked by the earth's geothermal energy. This Fontana staff member dug up the aluminum pot and brought the bread to the front entrance for it to cool before serving. 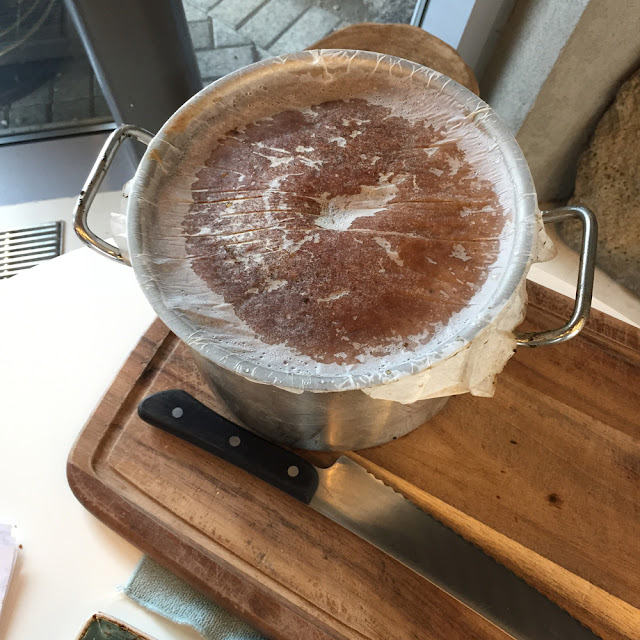 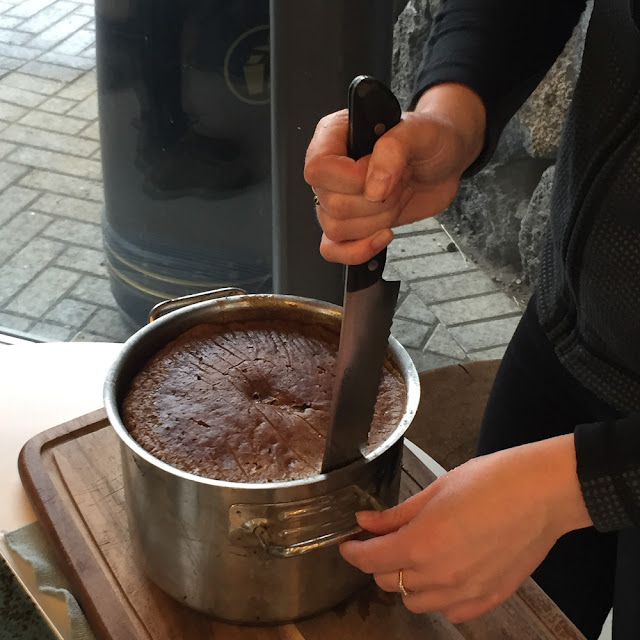 After the plastic is removed, the edge of the bread is loosened from the side of the pot with a sturdy knife. 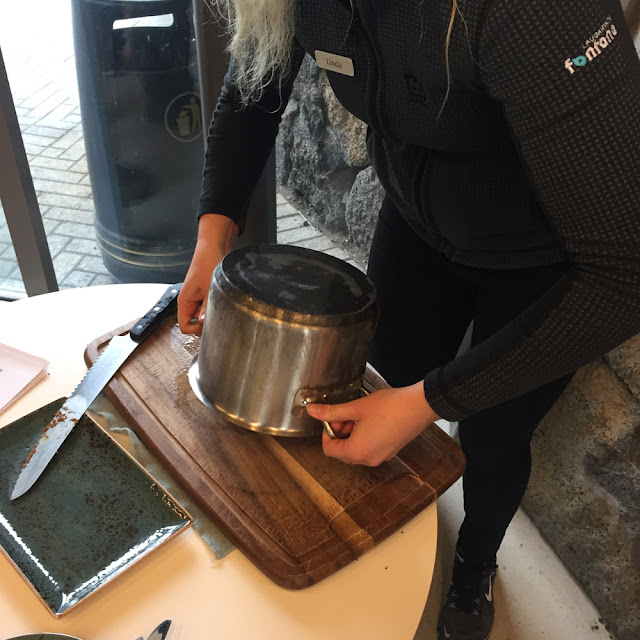 The pot is flipped over to remove the bread. 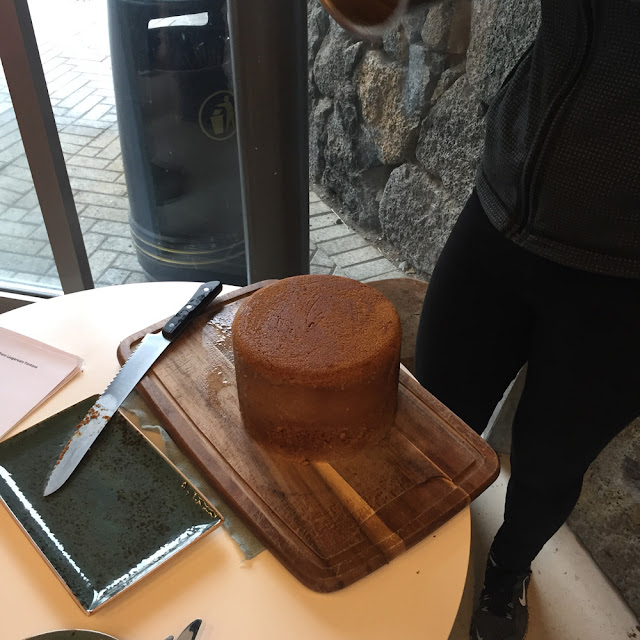 Ta-da! The aroma was incredible! 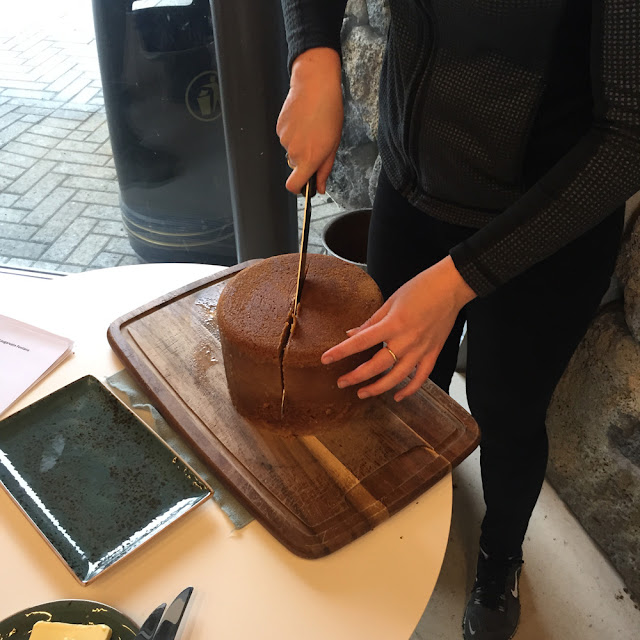 The loaf is sliced in half. The uncooked portion is cut away and discarded. 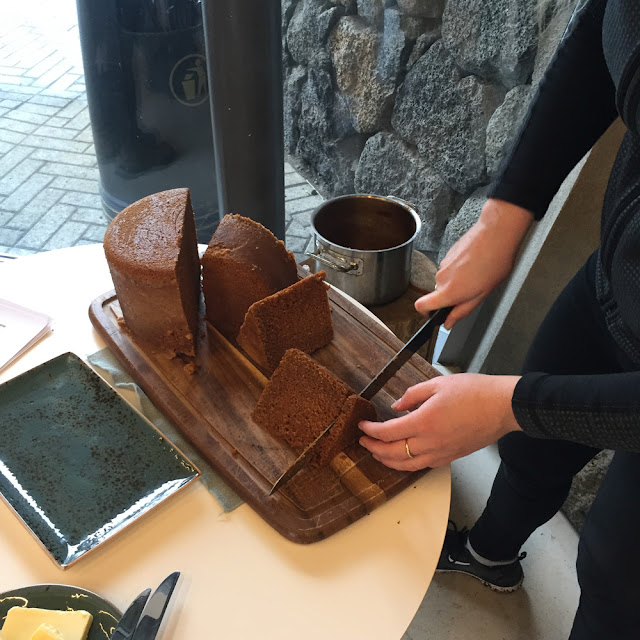 The loaf is cut into sections and then into small slices for serving with butter and jam.
Here is the recipe from the Laugarvatn Fontana Spa:

Put the mixture in a bowl and stir ingredients together.
Grease a large pot with butter
Put the dough in the pot and wrap it thoroughly so the hotspring water cannot get in
Dig a hole in the boiling sand and leave the pot there for 24 hours.
Remove it and let it cool slightly before serving

You can read more about Iceland's geothermal technology, which is entirely sustainable and renewable, by clicking here.
Posted by ANDREW RITCHIE at 4:54 PM

Wow what a cake, looks and sounds amazing

wow!!!
curious to know which part of the bake (in which area of the pot) was left uncooked?

Hi! The portion that was uncooked was the portion just under the plastic covering, which was not fully submerged in the soil.