My good friend Jessie Hodgson and I have known each other since we were babies. Our families are close friends and we consider them to be family now. She is nine-months pregnant (her baby is due any day!) and she is excitedly making last-minute preparations for baby's arrival! Over the last couple of months, she and her husband Brendan have been preparing and outfitting the nursery with all the required materials: a crib, a changing table, a rocking chair and dozens of other accoutrements needed to care for a newborn. The most exciting part of the process for Jessie, however, was decorating the space.

Jessie chose not to learn the sex of her baby until its arrival and was firm in her wish to avoid any sort of gender 'colour coding' in the nursery: she hates the colour pink and also did not want a nursery decked out with soccer-ball and hockey-stick motifs. She opted for warm taupe tones and soothing greys with hits of bright white, green and blue. There are some very special, personal touches in the room, as well, such as a dresser that Jessie used as a child and a beautiful, hand-painted mural of a tree that was created by my father, George Ritchie. I love how the nursery turned out. 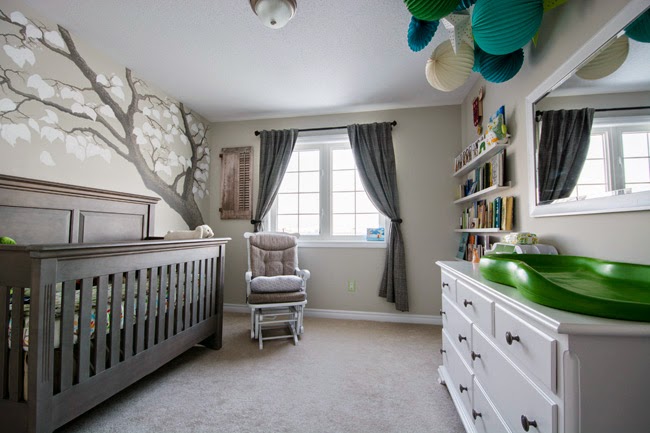 The nursery is bright and inviting, cheery but also subdued. The rocking chair once belonged to Brendan's grandmother. Brendan painted it white to match the other accents in the room. 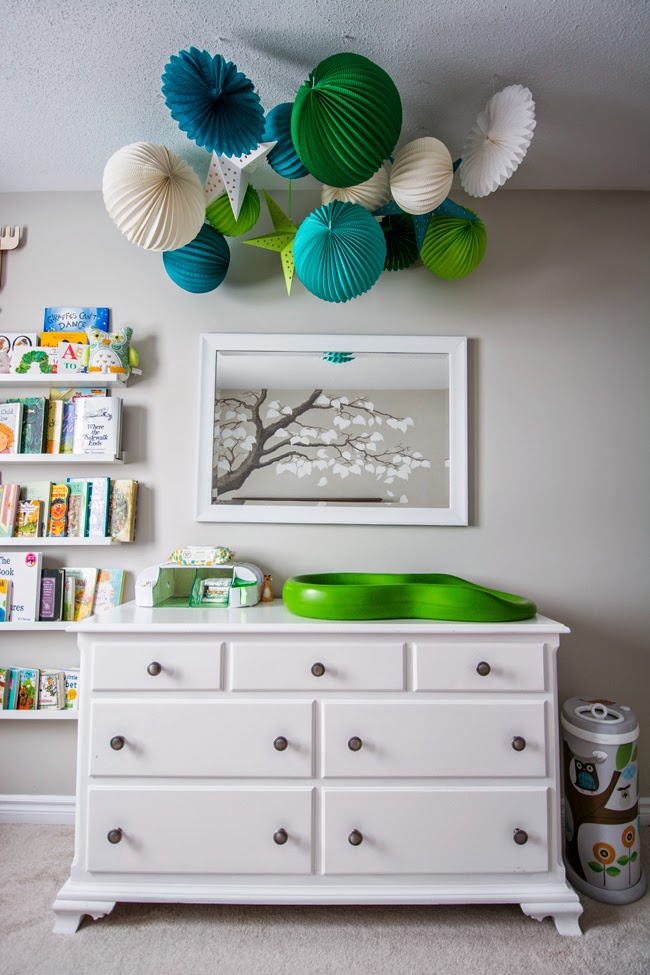 Jessie's mother, Sharron, refurbished this solid-wood dresser and painted it a bright white. It belonged to Jessie as a child. The mirror is from IKEA, repainted white to match the dresser; you can see the hand-painted mural in its reflection on the opposite wall. Jessie chose a bright green Jelly Bean changing mat to accent to the desaturated palette and hung pretty paper decorations from Michael's from the ceiling as a DIY mobile. 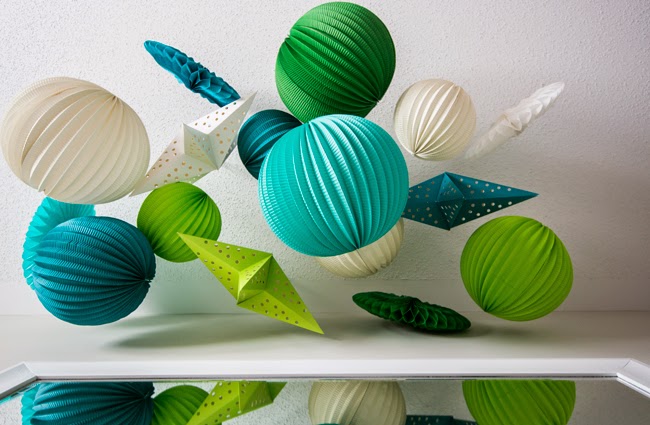 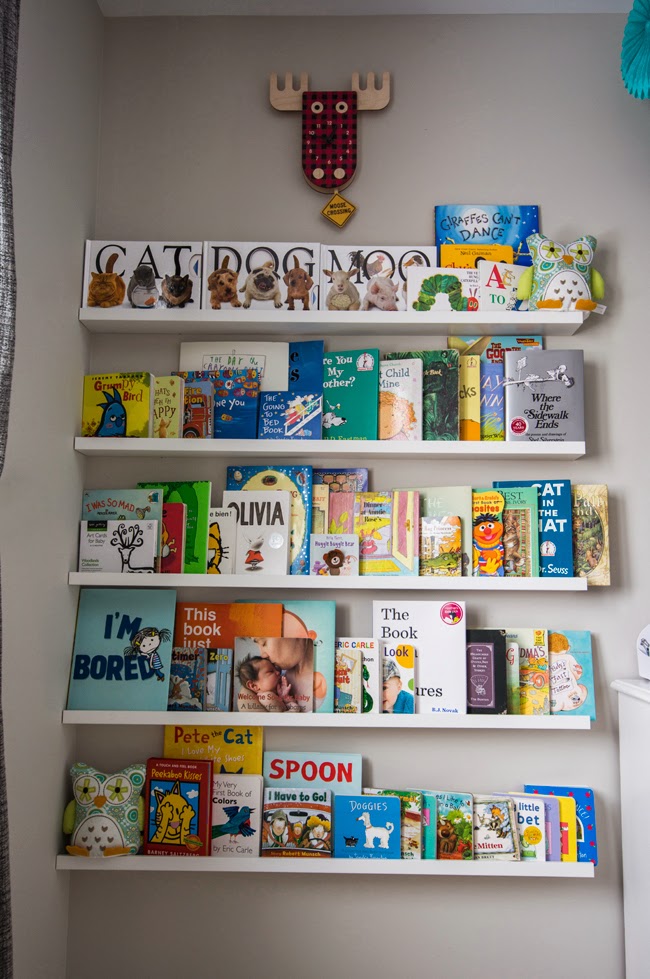 Picture rails, also from IKEA, are used to store a variety of children's books. It's a colourful, modern display. Above the books is the Modern Moo Pendulum clock (in plaid) by Paul Ocepek from Fab Baby Gear. 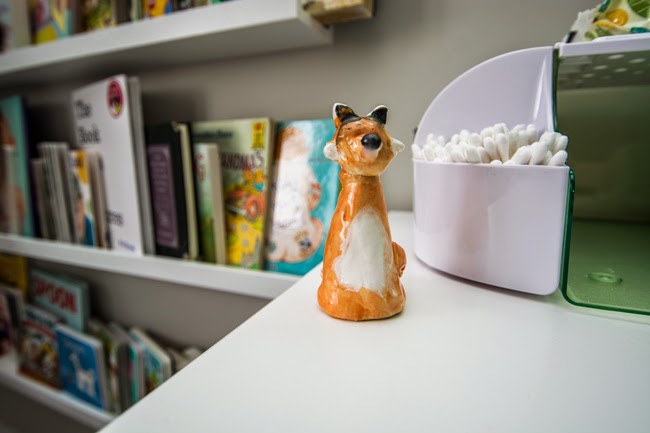 Among the personal touches in the room is a ceramic fox made by Jessie's nephew Drew. 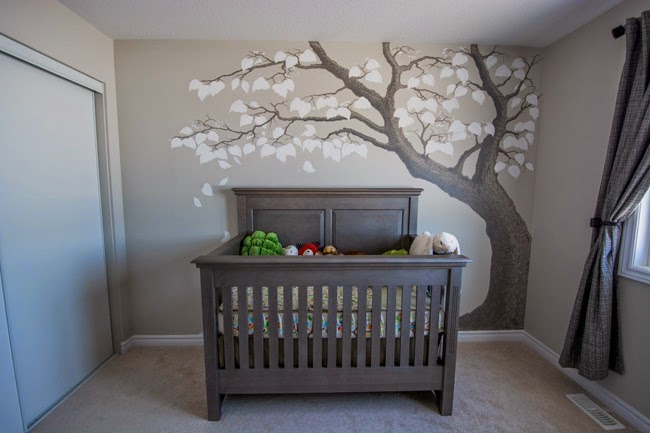 This solid wood crib by College Woodwork from Sleepy Hollow will serve Jessie's child well into young adulthood. It converts into a daybed and then a full bed. The mural of the tree my father painted is just stunning, filled with so much detail. 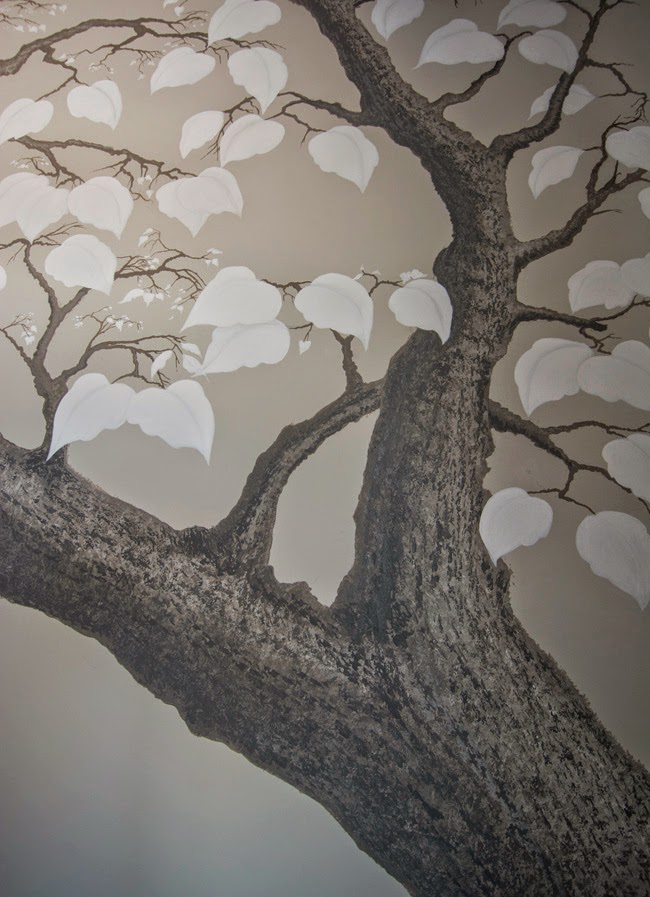 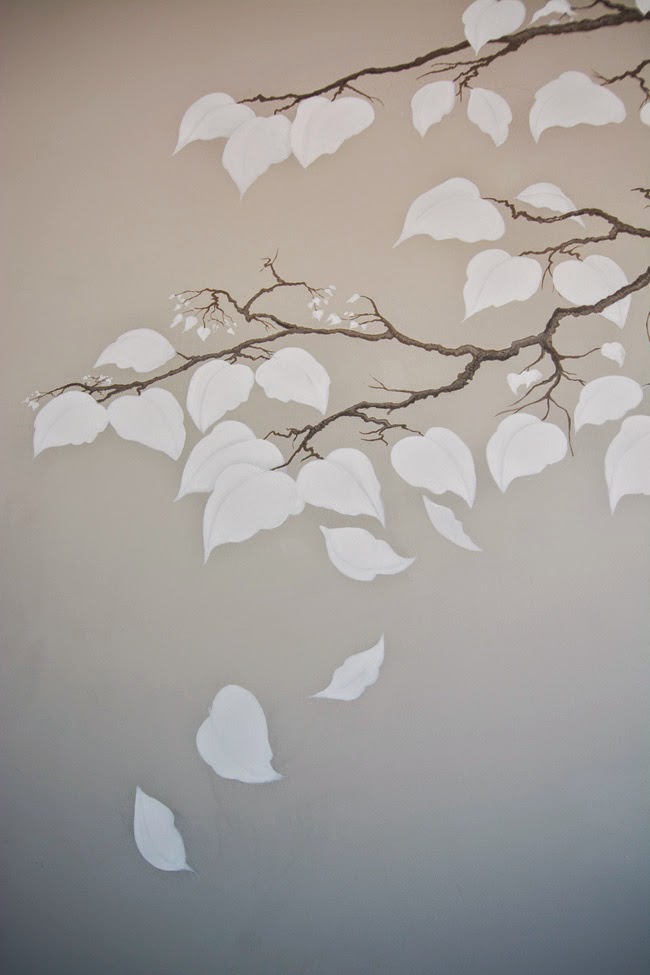 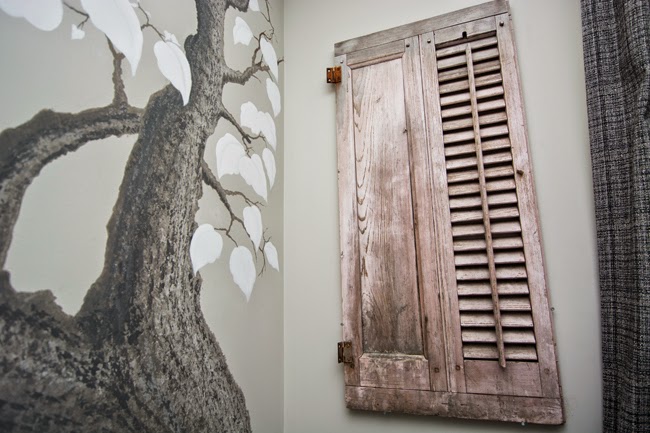 Jessie found these shutters at a flea market years ago and finally found a spot for them in the nursery. Jessie's baby will spend many happy days and nights in this room. 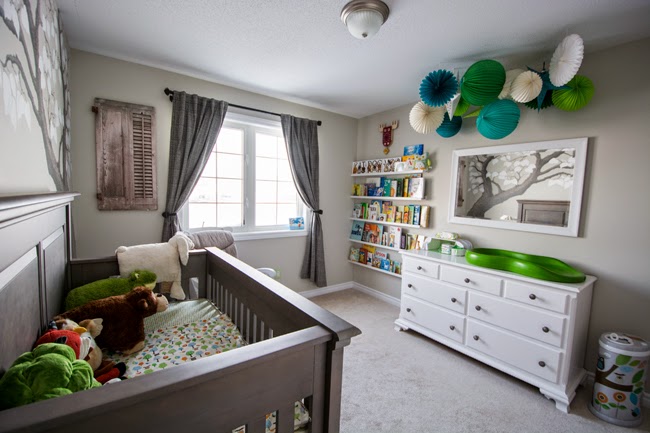 PAINTING THE MURAL
My father, George Ritchie, is a trained graphic artist and worked in the advertising business for many years. He studied fine art and design in college and has remarkable talent. Jessie approached my father about designing and painting a mural of a tree for the nursery and he spent several full days sketching and perfecting the painting, making sure the colour palette was correct before diving in. Aside from its technical and artistic beauty, it will be a lasting reminder of my father's talent and a sign of his love for the Hodgson family. 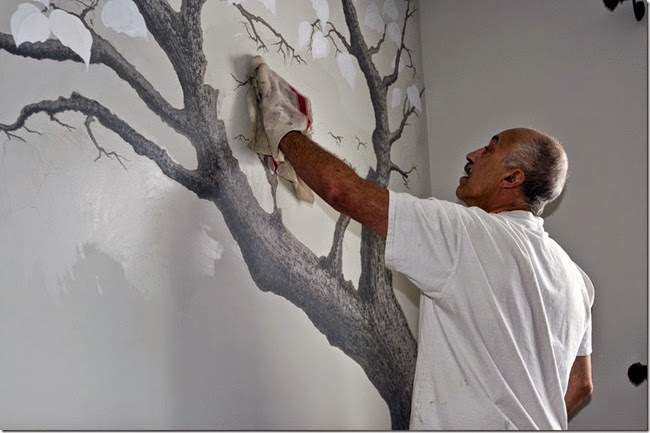 Photos by Jessica Hodgson
Photo of George Ritchie by Sharron Hodgson
Posted by ANDREW RITCHIE at 10:13 AM

Handsome room, and your a Dad is very talented .
APM

Hi Andrew,
What a beautiful nursery and amazing details, and colors. I love it. Your dad's work is stunning. A real wrok of art.
Best wishes

Beautiful doesn't fully describe this space. It's a perfect nursery. The tree makes the room.

Breathtaking beautiful and more. Enjoy the wonderful time of new birth and congratulations to all.