Pity the Lazy Suzan. In the realm of domestic tools, appliances and gadgets few are so cruelly labelled. But how did this household staple come to be; why was it named "Susan" and is she really lazy? I will try to answer some of these questions in the first edition of my new monthly column on Martha Moments called Domestic Insight.


Most of our kitchens are equipped with a Lazy Susan: those round turntable servers and trays that helpfully proffer condiments, spices and other small items that can be tricky to reach for. Few of us, however, know anything about its history.

The name "Lazy Susan" is a Twentieth-Century invention, first appearing in print in Vanity Fair magazine in 1917. The origins of the name remain largely unknown, although some believe it to have been a reference to a sluggish daughter of either Thomas Jefferson or Thomas Edison. There is no actual evidence to back this up, however, and the claim is largely dismissed by historians. 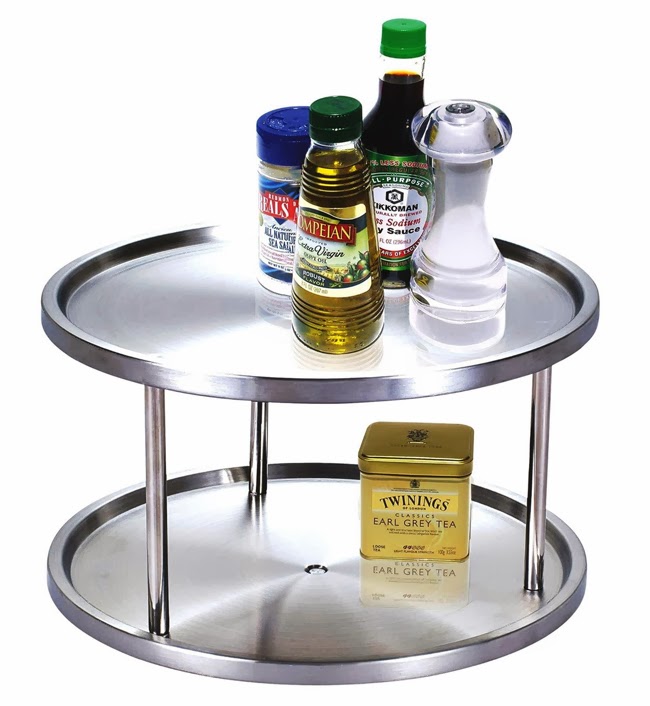 The concept of a turntable serving tray is much older, dating back to Eighteenth-Century England when it was known as a dumbwaiter: another pejorative term! Its popularity likely stemmed from a need for convenience. The aristocracy, finding it increasingly difficult to keep an adequate roster of maids and footmen to serve them at dinnertime, conceived of the ingenius device, which made reaching for the mustard a little more civilized. Dining room tables at the time were often outfitted with large round turntables that could hold the various courses and their accompanying condiments. No one person has yet been credited with inventing it.

As the decades unfurled, the Lazy Susan became increasingly popular. Henry Ford commissioned a large table with a Lazy Susan that accompanied him on his lavish camping excursions. The table measured nine feet in diameter and was designed to allow his guests to help themselves to their meals.

It was during the 1940s through the 1960s, however, that the Lazy Susan became a must-have household item in America. Advertisements for the device could be found in nearly every women's magazine in North America and new models were being designed with useful details, such as multiple, removable compartments that surrounded a larger central dish. These more detailed models were often made out of ceramic or glass.

In the '60s and '70s, the Lazy Susan began to change her role slightly, moving from the tabletop to the countertop to assist with food preparation rather than food dispensation. Salt, pepper, olive oil and all manner of daily cooking supplies were kept on Lazy Susans, well within reach of the home cook. During the 1980s, kitchen designers began to incorporate stationary Lazy Susans in cupboard interiors that could hold much larger quantities, keeping clutter out of sight but still close at hand. Today's modern kitchens still maintain this design feature, usually in a corner cupboard where space is more generous.

So you see, Susan was never really lazy. In fact, she is quite a hard worker! Perhaps those of us who use her services are the lazy ones being referred to here! Below is a gallery with some examples of Lazy Susans. 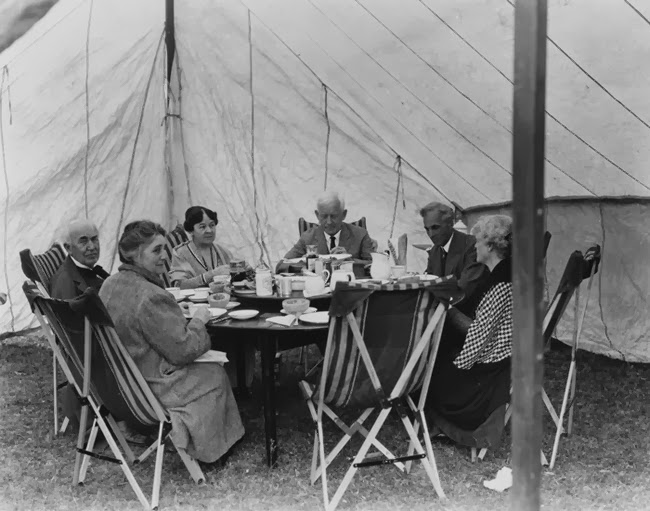 Henry Ford and some of his guests in 1923 enjoying a casual campsite meal at his 9-foot-wide table, which was equipped with a Lazy Susan turntable for serving. Photo courtesy of the Henry Ford Museum. 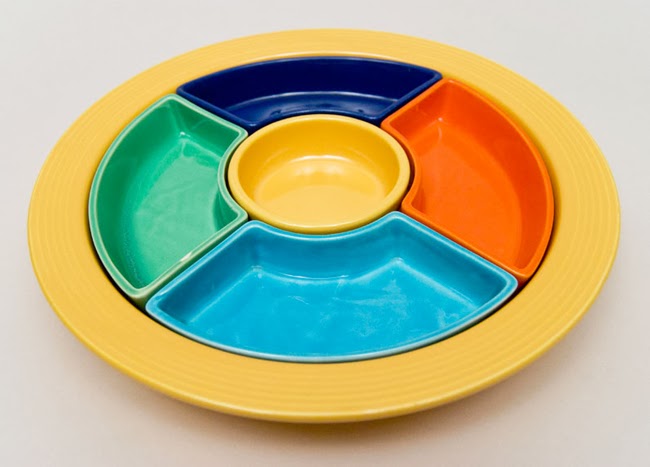 An example of a Fiestaware (ceramic) Lazy Susan from 1946 with removable compartments. 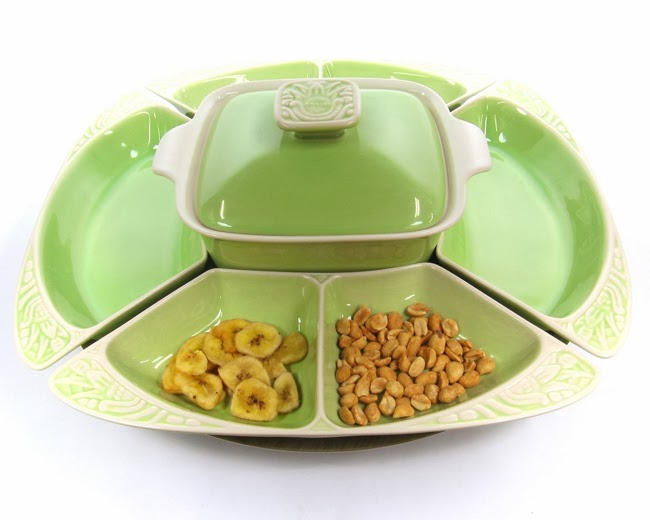 This Mid-Century example, also ceramic, has a central caserole dish with a lid for keeping food warm. The compartments around the perimeter can be removed for serving. 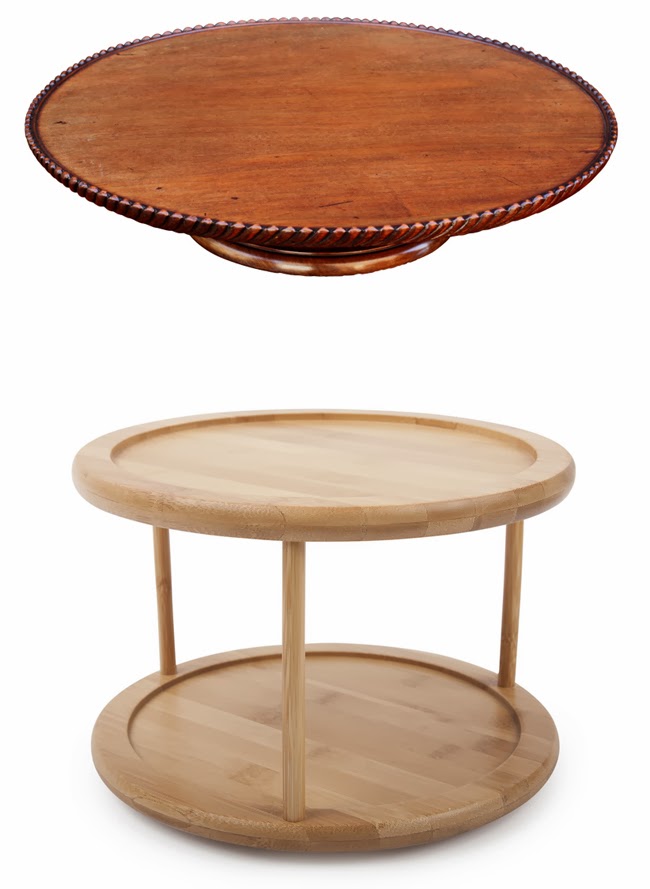 Top: An English mahogany Lazy Susan from the 1800s and a modern two-tier Lazy Susan for counter or cupboard storage. 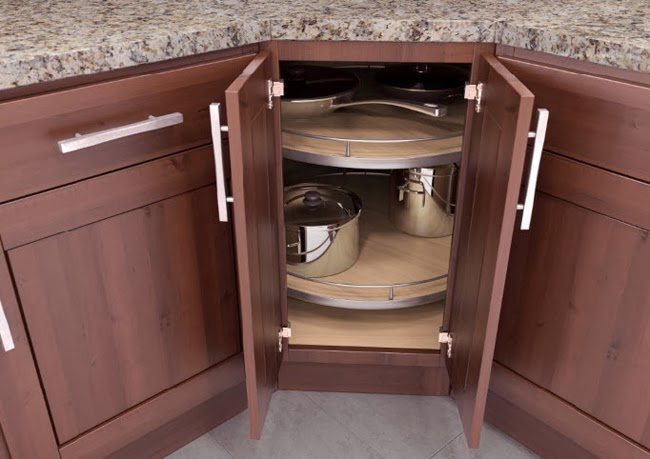 Many modern kitchens have built-in Lazy Susans in lower corner cupboards to store pots and pans.
Posted by ANDREW RITCHIE at 10:26 AM

What a fun post! I never thought of the origins of the Lazy Susan. I grew up in a house not outfitted with one and as a child was so envious of my friends' Lazy Susan's in corner cupboards.

Andrew,
Thanks again for an interesting and wonderful blog. I look forward to reading your monthly column.