On one of the landings off the back terrace at Skylands, Martha's 1925 estate in Maine, a French sculpture called La Riviere (The River) rests beneath the towering pines and hemlocks of Ox Hill, staring up at the turbulent Seal Harbor skies. The sculpture is one of several large-scale artworks Martha has purchased over the years. With the acquisition of Skylands in 1997 came the proper setting to showcase some of these prized possessions, including La Riviere, which was brought out of storage to enhance the rugged landscape surrounding the home. I thought it would be interesting to share some information about this dramatic sculpture. 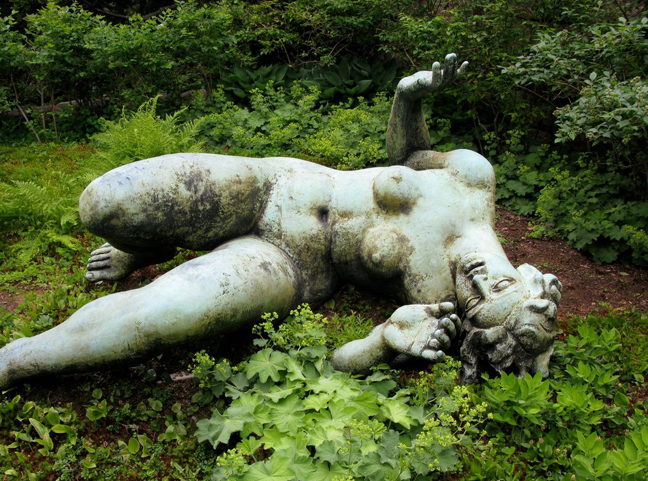 The sculpture (shown above at Skylands in Maine) was created by French artist Aristide Maillol. The sculpture itself is actually a lead cast made from a plaster mold that he created with the help of numerous apprentices. He began the mold for the piece in 1937 and completed it in 1943, at the age of 85. The casts were not made from the mold until 1948, however, two years after Maillol's death.

The sculpture is unusual for Maillol, who ordinarily sculpted very composed, calm figures. La Riviere, by contrast, shows a woman in active contortion. The work was commissioned by a pacifist and writer named Henri Barbusse. Maillol conceived the piece as a testament to the perils of war: a woman stabbed in the back and falling, perhaps, or sheltering herself from an attack. The commission fell through but Maillol continued with the sculpture and called it La Riviere, resetting the theme by imagining the woman as a river goddess. Understanding the origins of the piece as a reflection on the violence of war, however, adds another dimension to the work - especially considering it was commissioned just prior to the Second World War, a time of great turmoil. 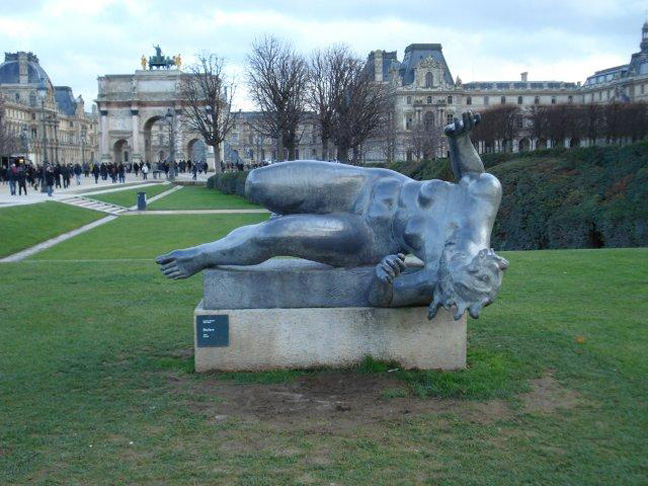 There are numerous casts of La Riviere around the world. Michael Fus, a preservation architect with the Chicago Parks District, sent in this photo he took of another cast of La Rivere in a park in Paris, France. He was immediately reminded of the sculpture in Martha's gardens. (Michael has toured the grounds at Skylands and you can see his photographs of Martha's property here.) Below, you can see a third example of the sculpture at the Museum of Modern Art in New York City, along with a photograph of the artist, Aristide Maillol. I love that Martha has a cast of this extraordinary sculpture, whose dramatic pose mirrors the dramatic architecture and landscape of Skylands. 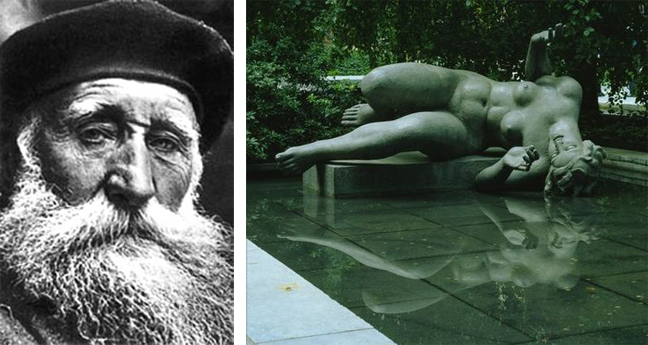 Posted by ANDREW RITCHIE at 7:27 PM

Andrew,
While I'm not a big fan of this sculpture,knowing the why and the who behind it does make it more interesting. Thank you.
Cheers
Vicki

Good morning Andrew I love this piece of art at Skylands in Maine, I did not know about the sculpture. Thank you for a very informative post.

thanx for info, much is being said now in USA about violence against women. There is much to be learned from Martha and her interest in LIVING.

Looks like the Awakening please google for the sculpture in Washington D C --U Will NOT be disappointed!!

Very interesting! I almost bought the Martha Stewart Framed Photography print of this statue in her garden. Wish it was still available... Thanks for sharing the background info!