Hello, friends! I'm back from the ether. Recent events in the world of Martha Stewart have prompted me to revisit the blog and post some updates. Stay tuned for upcoming posts about my experience at Martha Stewart's Great American Tag Sale at her farm in Bedford, New York, as well as the remembrances of my friends Bernie Wong and Dennis Landon. I'm looking forward to working on those posts and sharing photographs from the event - which was such a dream come true!

Also, I could not let the cessation of my favourite magazine go undocumented here. As I'm sure many of you have heard, Martha Stewart Living magazine has ceased publication. Several weeks ago it was announced that Dotdash Meredith, which owned Martha Stewart Living magazine, had decided to stop its publication, both online and in print. Many readers were initially shocked by the news, since there didn't appear to be any sort of lead-up or forewarning from the publishers. The May, 2022, issue which is on newsstands now is the last issue we will see. Most of the magazine's staff was laid off and it's still slightly unclear how or when the magazine's content will find a new digital voice. 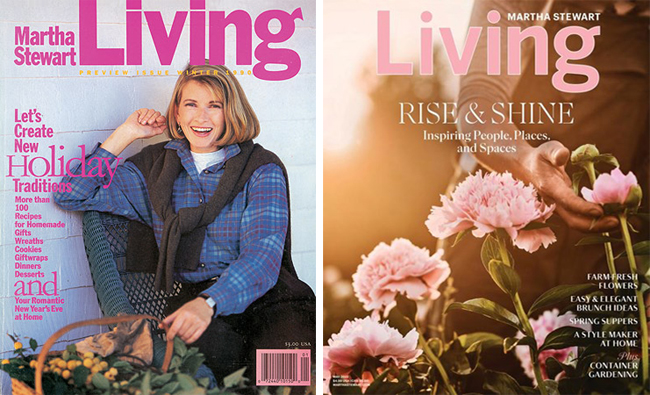 The first issue of Martha Stewart Living, left, was published in November of 1990. The final issue of the magazine was published last month: May, 2022.

During a brief conversation with Kevin Sharkey, EVP of Design for Martha Stewart Living, at the tag sale a few weeks ago, he assured me that the magazine wasn't "finished" but rather in a state of flux as they search for new ways to deliver lifestyle ideas, recipes and design inspiration to its former readers. In the initial press release about the folding of the magazine's print edition, Martha urged readers to pay close attention to Martha.com and a new platform emerging there called Martha Now. Be sure to visit the link and sign up for exclusive offers and content!

I know many of us will miss the monthly delivery of the magazine to our mailboxes, or perusing it at the checkout stand or newsstand. I certainly always enjoyed receiving Martha Stewart Living and taking time to carefully leaf through its pages. You all know how much of a dedicated "Martha student" I've been over the years, so it does feel odd to know I'll never again receive a new issue of my favourite magazine. It had been a part of my life for 25 years. Thankfully, I have over 200 of the best issues the magazine has ever published and I frequently go back and read them, cover to cover, always finding something I missed the last time. They are treasures I'll never part with.

To read about my favourite issues of Martha Stewart Living, be sure to browse through a monthly column I wrote several years ago called Looking Back to Move Forward, highlighting what I feel are the magazine's best issues, month by month.

Also, click here, for a brief history of Martha's magazines, including Martha Stewart Living, and click here for a celebration of the magazine's 25th anniversary with posts about the 25 Best Things about MSL. 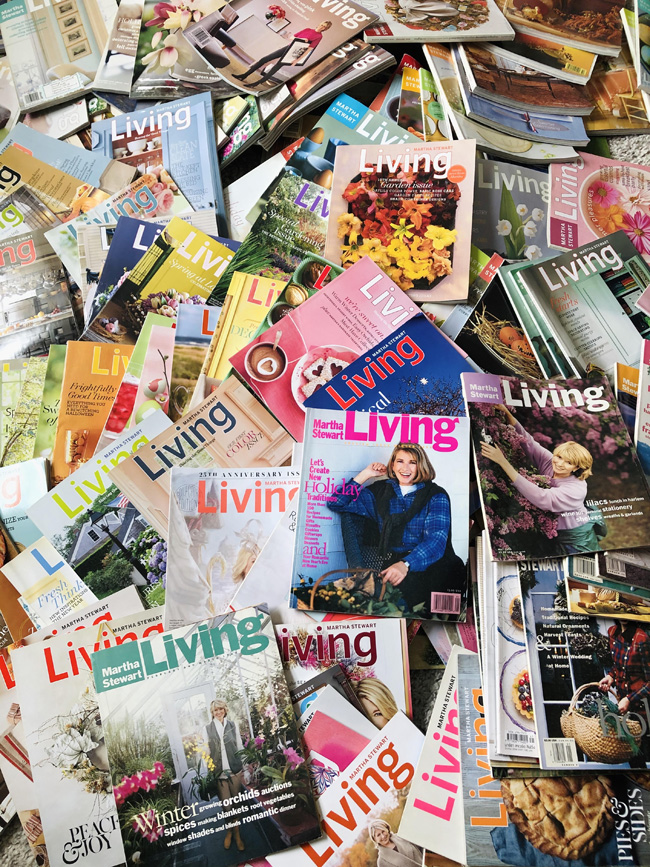 During one of the lockdowns, I endeavored to organize all my back-issues of Martha Stewart Living. The first step was getting them all out of storage to see what I had. I love this photo of this 'pile' of wonderful issues. I've organized them by month in sturdy magazine holders from IKEA. I prefer to read them by season.
Posted by ANDREW RITCHIE at 12:16 PM

Hello Andrew! I, too, was shocked to hear about the May 2022 issue of MSL being the last one. I have so many happy memories of reading various issues at my parents' house during the holidays. One story, in particular, stands out for me. I believe it was a Christmas dinner party at Gael Towey's home in NYC. There was a fantastic photo of her decorated tree and her family carrying a huge pan of seafood paella down the stairs of their brownstone. I'm wondering if you happen to recall in which issue this story can be found? I would love to take another look at it. Thanks for all the great content!