I'm a sucker for a good summer pie - pies that are laden with cooked in-season fruits, or pies that derive their personalities from vintage-diner days of yore. During the last lockdown in Ontario, I endeavored to make more pies and I was inevitably drawn to some of Martha's recipes.
First of all, I find her recipe for pate-brisee to be the best one I've encountered, mainly because it is an all-butter crust. Shortening is great for flakiness, but it is lacking in the flavour department. I also like how all-butter crusts turn a beautiful golden-brown colour, rather than the pallid beige of a crust made with shortening. Her recipe is quick to make, too, using a food processor - basically, just a few seconds. I've included her recipe below.
All of the pies I made, shown below, were made using one of Martha's recipes. I've provided a link for each one. They each appealed to me for different reasons, but I hope you find one of them alluring enough to make yourself this summer! Enjoy! 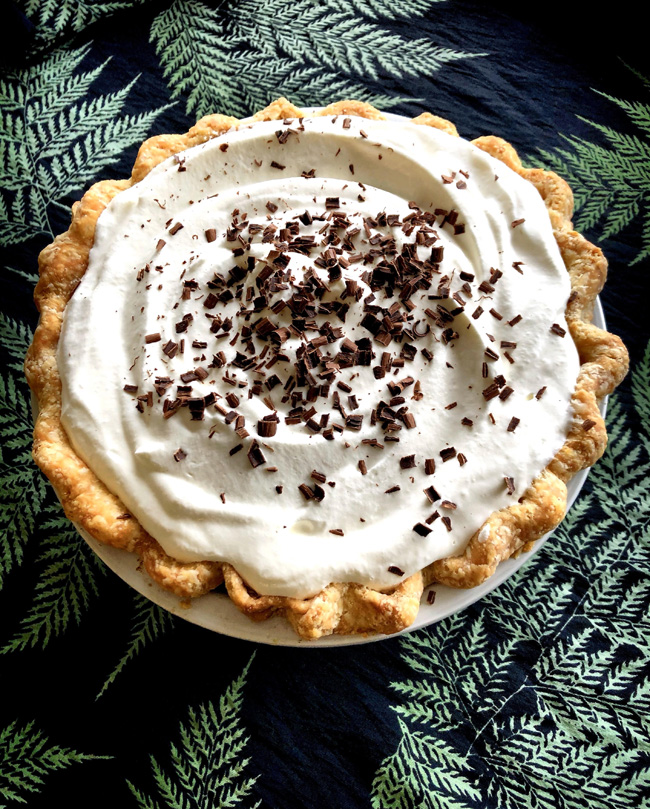 Banana cream pie is one of my favourites. Even as a kid, I would seek it out at restaurants and diners. They became increasingly difficult to find over the years as apple pie emerged as THE pie shown on almost every dessert menu. Thankfully, having this recipe in my repertoire means never having to search for one again! The filling is luscious and creamy, studded with slices of fresh banana, then topped with sweetened whipped cream and chocolate shavings. Click here for the recipe or find it in "Martha Stewart's New Pies and Tarts". 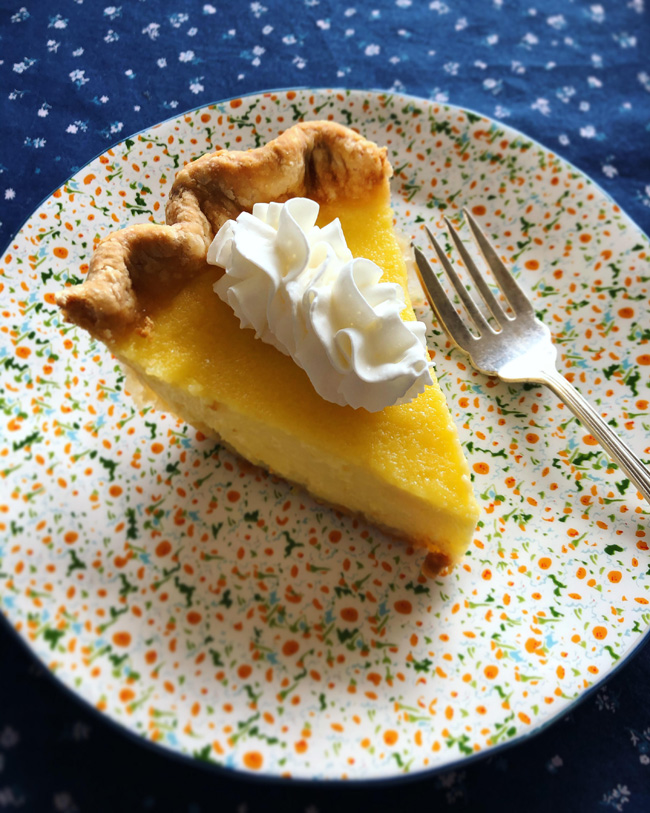 Rum raisin is my favourite ice-cream flavour, so rum-raisin pie was an obvious choice for me. The custard filling is very subtly-flavoured with vanilla and rum and sits atop a layer of golden raisins along the bottom of the pie crust, which when cooked become plump and juicy. Topping each slice with whipped cream is essential. Click here for the recipe, or find it in "Martha Stewart's Baking Handbook." 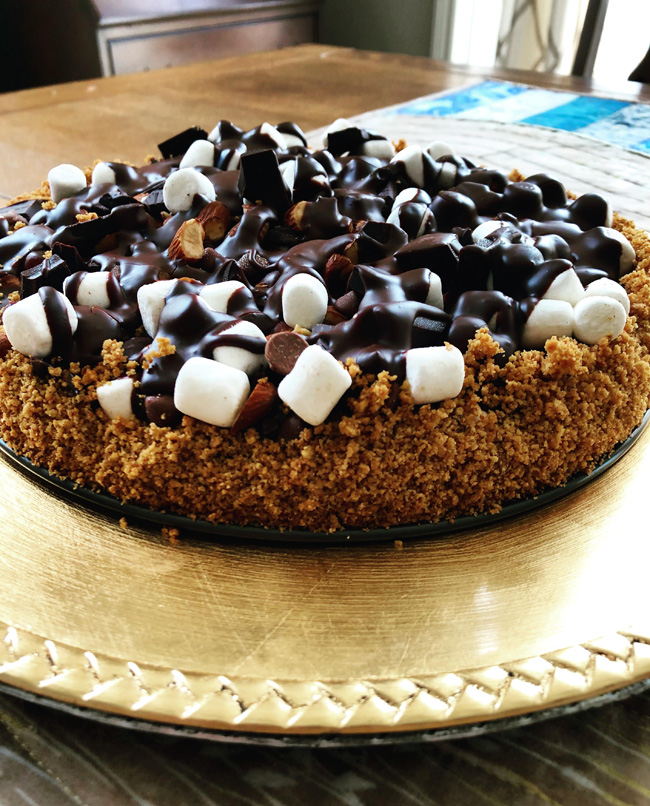 This decadent tart is also inspired by an ice-cream flavour: the ever-popular Rocky Road. I made this one for Father's Day, since Rocky Road is my dad's favourite ice-cream flavour. This one uses a simple graham-cracker crust and is filled with a chocolatey ganache studded with roasted salted almonds, mini marshmallows and chunks of dark chocolate. The recipe for the crust calls for five tablespoons of melted butter. I didn't find this to be quite enough. I would increase the amount to one stick (half a cup) next time, since I found the crust came out quite crumbly. But... this is one of the most delicious desserts I think I've ever made. My father loved it, as did my entire family. I was asked for the recipe several times. Click here for the recipe or find it in the August 2004 issue of Martha Stewart Living magazine. 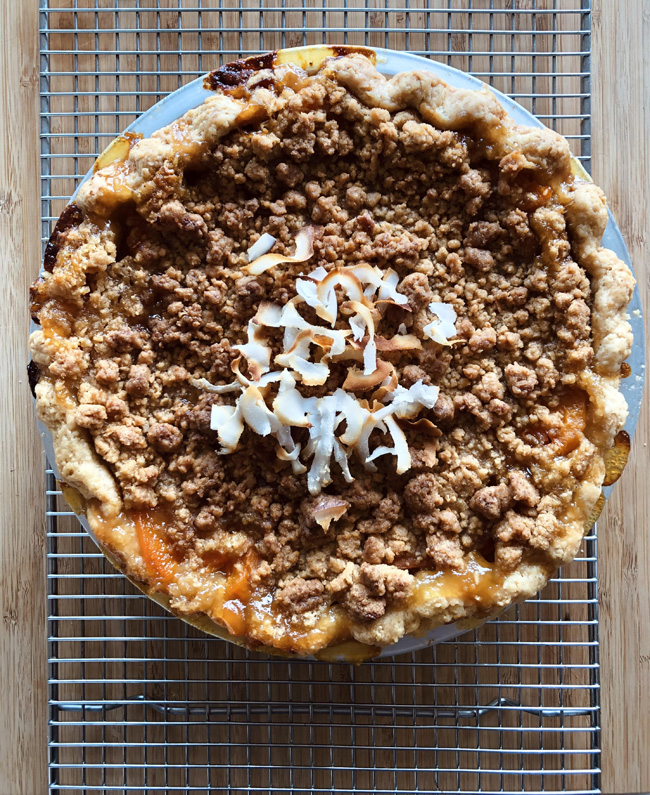 It was the plethora of fresh apricots at the market this month that inspired me to make this pie. When I saw Martha's recipe for apricot pie with a coconut-crumble topping, it wasn't long before I settled on it. The flavour is excellent and apricot and coconut is such a summery combination. It's best served slightly warm with a big scoop of vanilla ice cream. Click here for the recipe, or find it in the June 2011 issue of Martha Stewart Living magazine.
Next on my list is a coconut-cream pie... or maybe a cherry pie, or maybe a peach pie...

Step One: Ensure all your ingredients are cold before using, including the dry ingredients. In the bowl of a food processor, combine flour and salt; pulse to combine. Add the butter, and pulse until mixture resembles coarse crumbs with some larger pieces remaining, about ten seconds. (To mix by hand, combine dry ingredients in a large mixing bowl, then cut in the butter with a pastry blender or use your fingers).

Step Two: With the machine running, add the ice water through the feed tube in a slow, steady stream, just until the dough begins to hold together without being wet or sticky. (If doing by hand, mix with a fork as you pour the water). Do not process for more than 30 seconds. Test by squeezing a small amount together; if it is still too crumbly or sandy, add more water, one tablespoon at a time, until it begins to come together. It should still be somewhat loose but hold together when squeezed.

Step Three: Turn out the dough onto a clean work surface. Divide in half and place each half on a piece of plastic wrap. Shape the dough into flattened disks. Wrap in plastic and refrigerate at least one hour or overnight. The dough can be kept frozen for up to one month. Thaw in the fridge overnight before using. Allow the dough to rest at room temperature for about 10 minutes before beginning to roll it.

Step One: On a lightly-floured surface, roll out dough to a 13-inch round, ¼ inch thick. Fit dough into a 9-inch pie plate. Trim dough, leaving a one-inch overhang. Tuck overhang under, flush with rim, crimping edges. Pierce bottom of pie shell with a fork to allow steam to escape while baking. Refrigerate until firm, about 30 minutes.

Step Two: Preheat oven to 425. Line shell with a large round of parchment and fill with pie weights or dried beans. Bake until edges are slightly golden, 15 to 18 minutes. Remove pie from oven and remove parchment and pie weights. Reduce oven temperature to 375 and return pie shell to bake for an additional 20 minutes. Let cool completely on a wire rack before filling.