With the arrival of the 30th anniversary issue of Martha Stewart Living, I was prompted to look back at some of the past anniversary issues the magazine has published. Each one is a treasure in its own right, a perfect little capsule of time and reflection in the magazine's history. With each edition, they editors made sure to give readers a little dose of something special. And in true Martha form, the attention to detail in each issue was tantamount to excellence. Below is a look back at each of the anniversary issues. I hope you enjoy it! 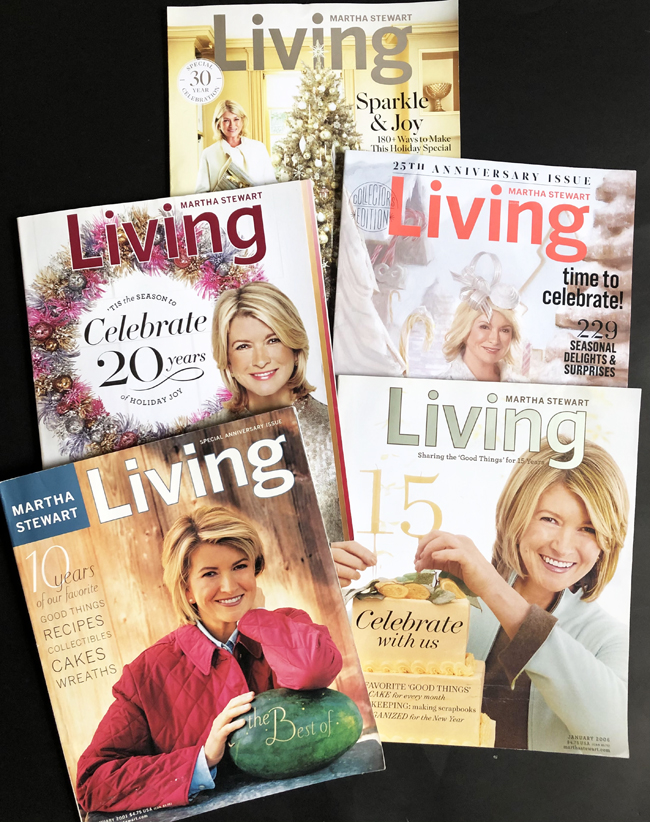 So far, there has been an anniversary edition of Martha Stewart Living to celebrate the magazine's tenth, fifteenth, twentieth, twenty-fifth and thirtieth birthdays. The tenth and the fifteenth were January issues that kicked off the anniversary year in question. The others were all December issues that concluded the anniversary year. I imagine that since the December issue is more popular with readers, the editors decided, instead, to cap off the anniversary with a festive bang. Each one is a delight to read, filled with remembrances and highlights from past issues. Martha, of course, is featured on the cover of each. 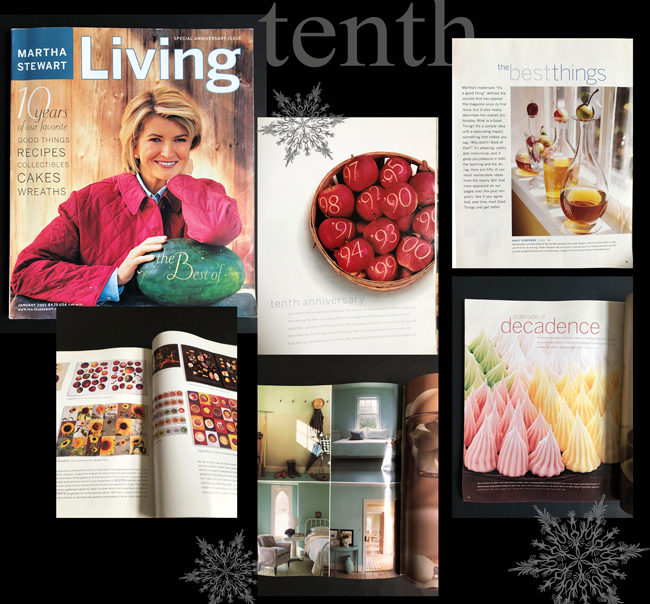 The tenth anniversary issue was published in January, 2001. The editors took the opportunity to deconstruct, even analyze, some of the hallmarks of the Martha Stewart Living ethos. There is a beautiful look at some of the popular visual glossaries that had been published. These glossaries were the brainchild of then Creative Director Gael Towey and were a true signature of the magazine's visual underpinnings: different examples of one thing (sunflowers, citrus fruits, spices, silverware) photographed in one artful picture. The editors also compile a list of the best "Good Things" and devote a good 25 pages to the column. In the features section, the magazine's love affair with colour is examined with past editorial photographs. Then, a 'Decade of Decadence' looks back at some of the best confections the magazine created in its first ten years on newsstands. Martha concludes the issue with a "Remembering" column reflecting on how and why she started the magazine. 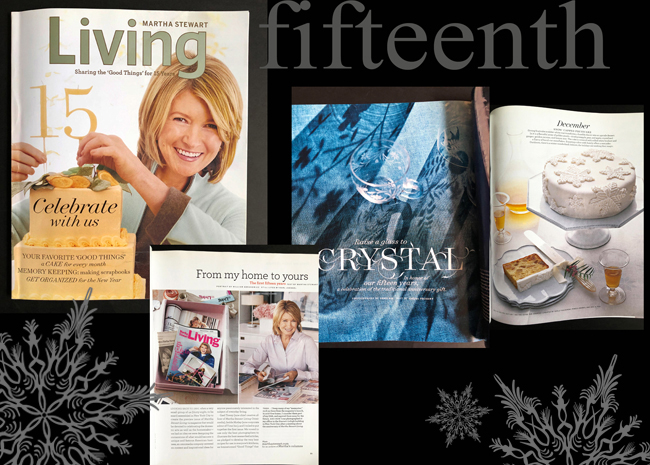 January 2006 was the fifteenth anniversary issue. To open, Martha reflects on how she created the first issue of the magazine and shares anecdotes, such as shooting the cover on the balcony off her bedroom at Turkey Hill on a hot summer day in the squinting sun. The editors share the most popular Good Things from the magazine to that point: not necessary the best Good Things, as presented in the tenth anniversary issue, but the most popular. These include the dishwashing-soap bottle, strawberry pincushions and homemade glycerin soaps. In the features section, the editors examine the virtues of crystal glassware, the traditional 15th anniversary gift. (This was a suggestion I had made to Margaret Roach in a letter to the editor the year prior, anticipating the 15th anniversary issue. Whether or not she had already considered that idea, I cannot say. But I like to assume my suggestion at least got the wheels turning). There is also a beautiful feature showcasing a cake for each month of the year. 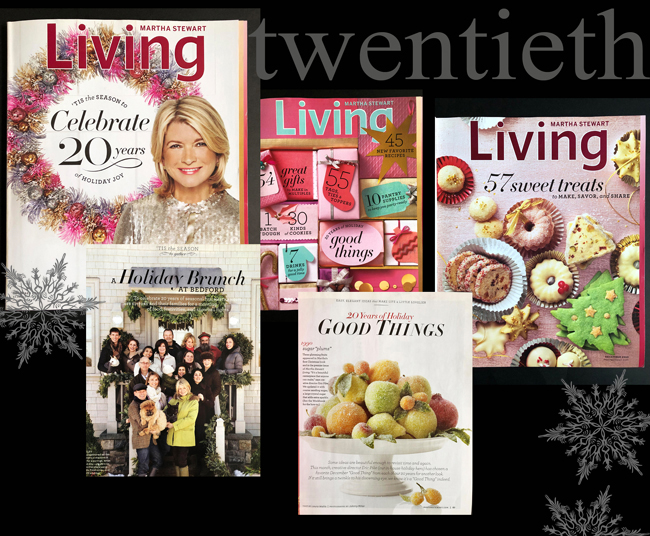 The 20th anniversary issue (December, 2010) is over-the-top! Maybe even too much so - and I can't believe I'm actually saying that! It is almost too saturated with its sparkle and splash. It is still a delightful issue, however. Martha's column is about a holiday brunch she hosted for the magazine's top brass, including familiar names like Eric Pike, Kevin Sharkey, Hannah Milman and Gael Towey. (This feature was later used in the "Martha's Entertaining" book). Once again, there is a roster of classic Good Things from issues-past. Vanessa Holden, the editor in chief at the time, had three different covers commissioned by the art department to celebrate (each cover is presented in the issue), which I thought was a pretty fabulous touch. This was also the year the magazine launched its first ever digital special issue: all new content produced for the iPad in an issue called "Boundless Beauty" which I thankfully have saved to disc! 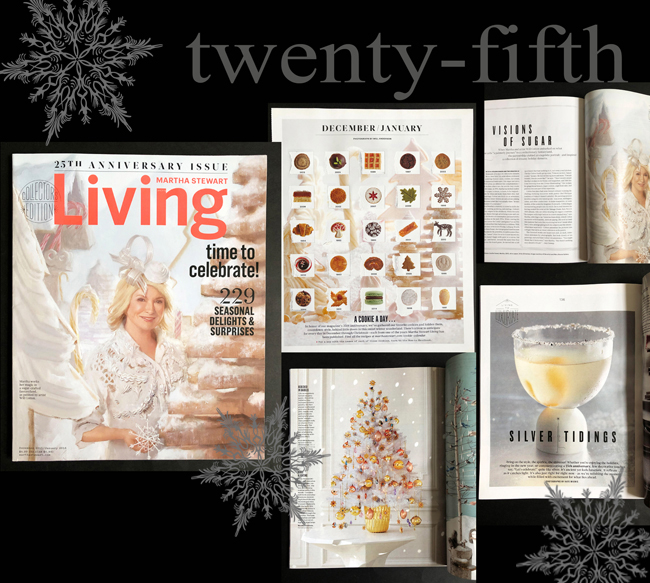 For the 25th anniversary issue (December, 2015), the editors commissioned a cover painted by artist Will Cotton, who specializes in painting confectionery landscapes. It is the only cover of Martha's magazine, to date, that is not a photograph. One of the best things about this issue was the inclusion of a detachable cookie advent calendar: a cookie a day! The recipe for each of the cookies was included in the magazine. It was so much fun to reveal a new cookie each day of the month! In the well of the magazine the style editors were asked to come up with their best version of a Christmas tree: my favourites include those by Kevin Sharkey, Marcie McGoldrick and Eric Pike. As with the 15th anniversary issue and its look at crystal glassware, the editors took the traditional 25th anniversary gift, in this case silver, and played with it in creative, festive ways through crafts, table settings and decorations. 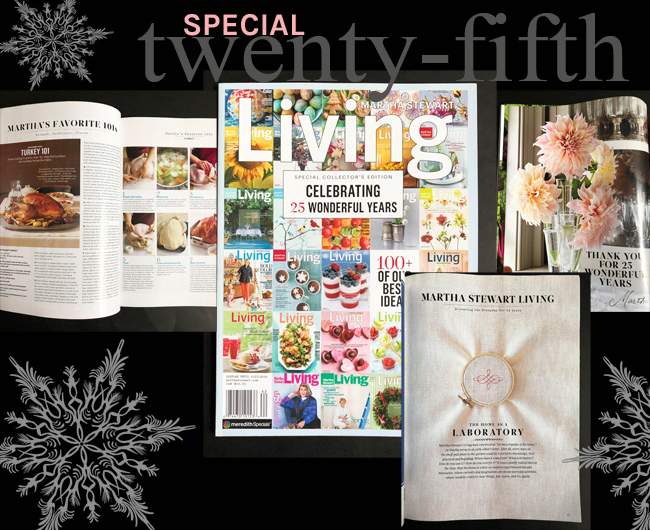 That same year, the editors put together a standalone special 25th anniversary issue. Martha selects her favourite covers over the years, a selection of the best Good Things and compiles her best (and most essential) "101s" at the front of the magazine. At the back of the magazine, some of her favourite editorials from the magazine are reprinted in full, each representing one of the core-content areas of the magazine's focus. This was only available on newsstands and was not part of a subscription. It's a very nice issue to have! 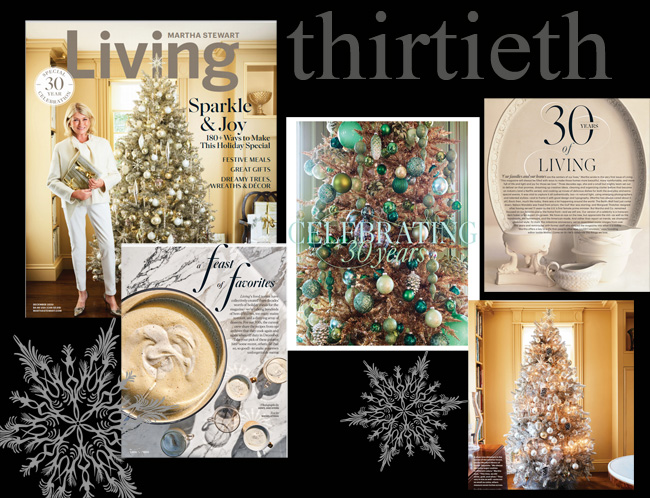 And, of course, the most recent issue of all: the December 2020 issue, which is the current issue on newsstands and the 30th anniversary edition of the magazine. For this issue, the editors reached out to some of Martha's friends, colleagues and admirers to submit their reflections and thoughts about what Martha has meant to them over the years. These quotes were peppered through the magazine at the bottoms of the pages. (I'm on page 70!) There is a collection of the most popular holiday recipes Martha has published over the years and a look back at 30 years of the magazine's editorial landscape as well as a fun look at Martha's holiday party last year.

Each of these issues is a collectors' item that I will hold on to and cherish. If you don't have them and would like to add them to your collection, look for them on eBay or Etsy where they frequently turn up.

AR over the years my collection of MS hardback books has grown-- because I discover an edition of say Gardening at an Estate sale for an a few dollars. I can't help myself, however not visiting tag sales cold turkey 2020 ---my fix LOOKING at the books and rediscovering the iconic MS trends. Fun Survey what "trends" do you think MS responsible for. MY TOP TEN