Though it may not be easy to describe, Martha Stewart's look is iconic. Her fashion sense is refined in its simplicity, softened by a natural elegance and grace that comes from a love of all things beautiful. She opts for classic, wearable clothes that allow for freedom of movement (she's a busy woman), clothing that imparts a certain air of comfort without looking too casual. Naturally, she admires quality. And that love of all things well-made extends to her wardrobe. It was when American fashion designer Ralph Rucci posted a photograph of Martha on his Instagram feed today @ralphrucci that I realized I had never done a post about Martha's personal style and fashion sense, which seems a shame since there is much we can learn about how to dress from this remarkable woman. 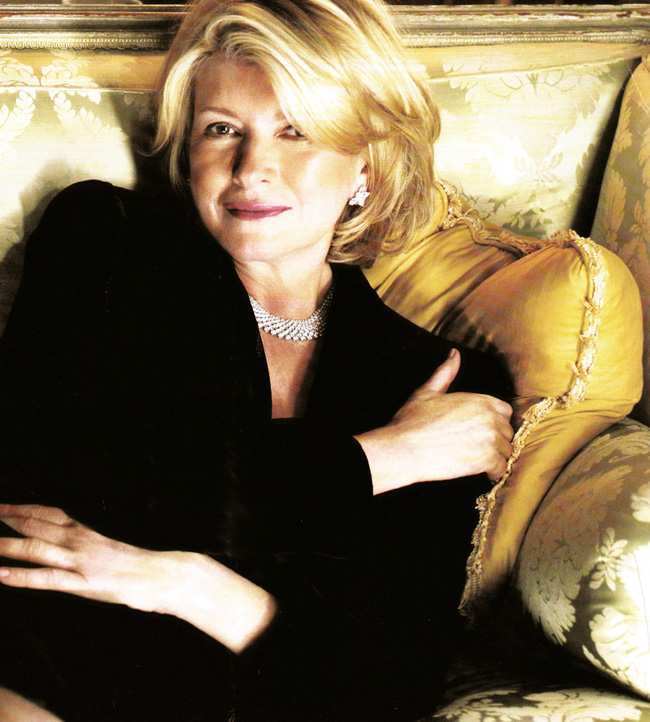 I wasn't able to find much written specifically about Martha's fashion sense - a few captions on entertainment websites notwithstanding. However, in 2006, Martha was profiled in Harper's Bazaar magazine for its September issue in an article by Susan Orlean titled "The Seductive Side of Martha". The article celebrates her iconic look and lauds it even further with some stunning photographs by Francois Dischinger (directly above and directly below) of Martha dressed in Yves Saint Laurent, Chanel, Armani and the aforementioned Ralph Rucci. 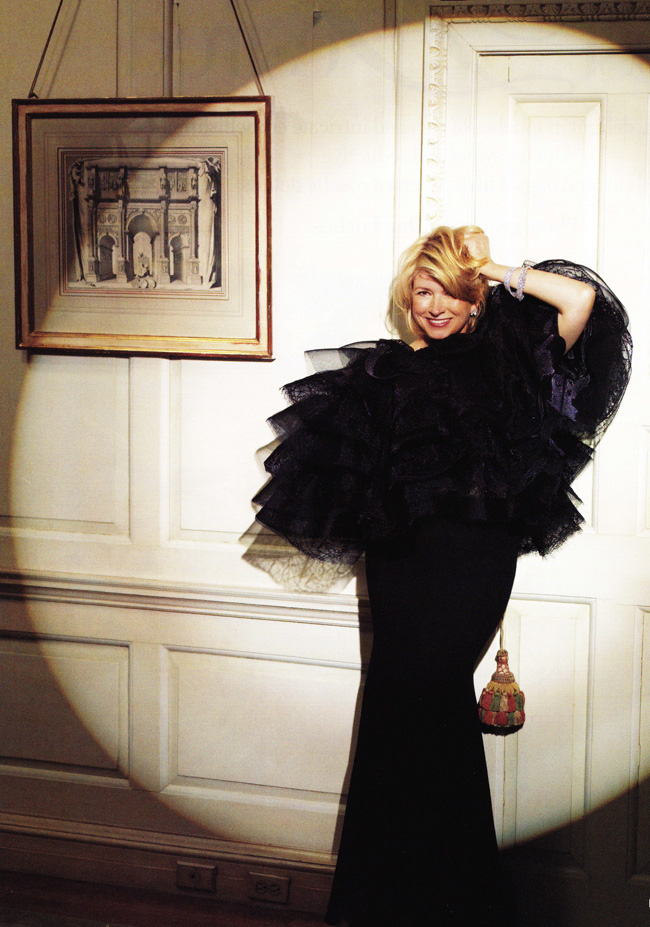 In this paragraph from the article, Orlean perfectly captures the essence of Martha's style:

"She loves fashion - more exactly, she loves gorgeous fabric and expert tailoring, and, true to her passion for utility and a certain exquisite practicality, she especially loves well-made clothes that are very wearable. Her own style [...] is unfussy, untrendy, slightly countrified, elegant in its plainness. She wears Ralph Rucci, Hermes, Jil Sander and Ralph Lauren - or old denim work shirts and khakis when she's in the garden. For nearly 25 years, she has looked like a woman who is getting ready to have friends over for lunch but just might take a horseback ride or plant a few daylilies before they show up."

When it comes to fashion, imagery speaks louder than words: below are numerous photographs of Martha gathered from the vast image trove that is the World Wide Web that illustrate Martha's classic style. I've grouped the images by theme for an easier overview. I hope you enjoy this look at Martha's impeccable style! 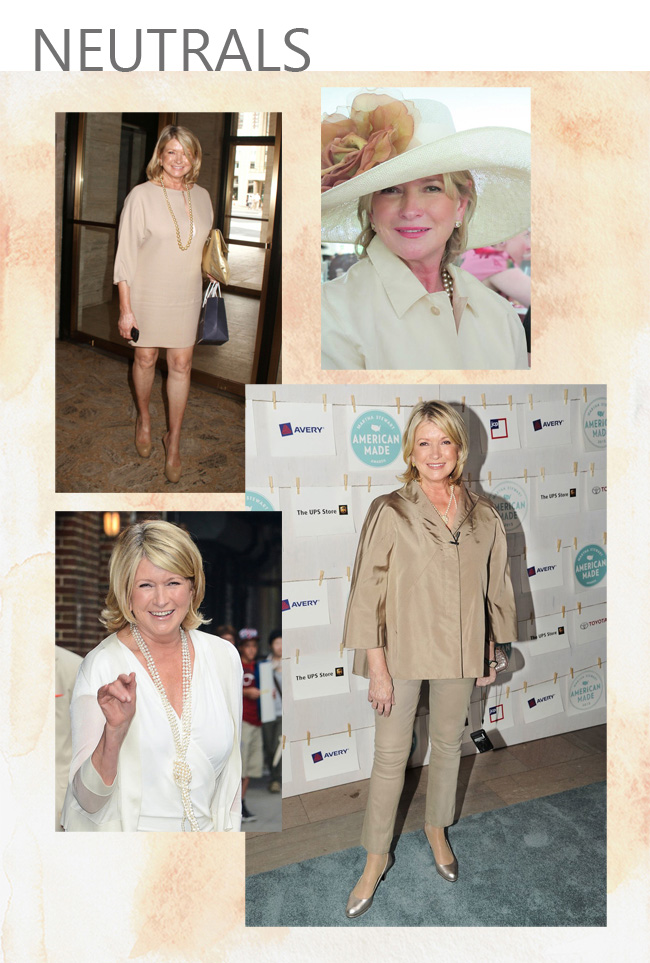 As with interior design, Martha has a strong preference for monochromatic looks, especially subdued neutrals. Here, photographed attending public events, we see Martha in head-to-toe neutral looks that are simple and elegant, letting the cut and texture of the fabric do the talking. Jewelry, too, is kept to a minimum and is often chosen from a neutral palette: pearls, gold, diamonds (white and yellow) maintain a warm glow. Martha rarely wears silver jewelry or coloured stones, such as rubies, emeralds or sapphires. 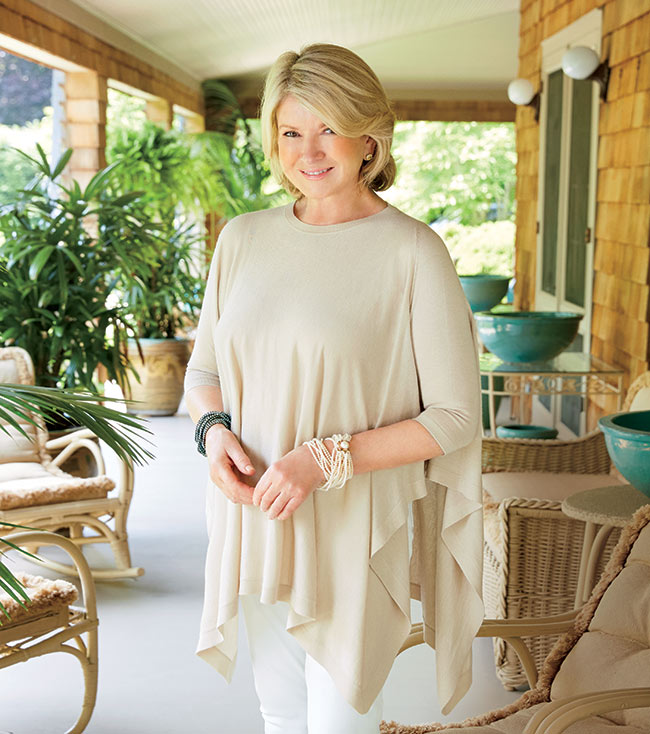 Martha photographed by Hamptons magazine at her home on Lily Pond Lane in 2015, wearing a neutral ensemble. She is wearing an Armand Diradourian sweater and white leather leggings from Shari's Place in Southampton. 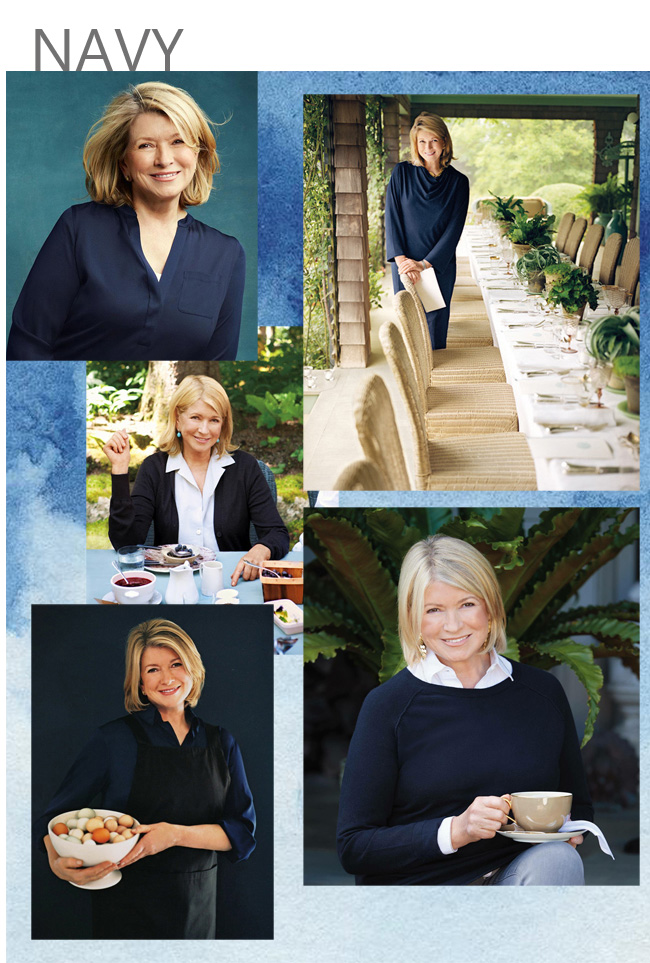 Many women over 50 eschew navy but Martha's youthful and energetic poise carry it perfectly. It is a classic tone imbued with a sense of strength, order and discipline. It derives its heritage from the uniforms first worn by the Royal British Navy in the mid 1700s. 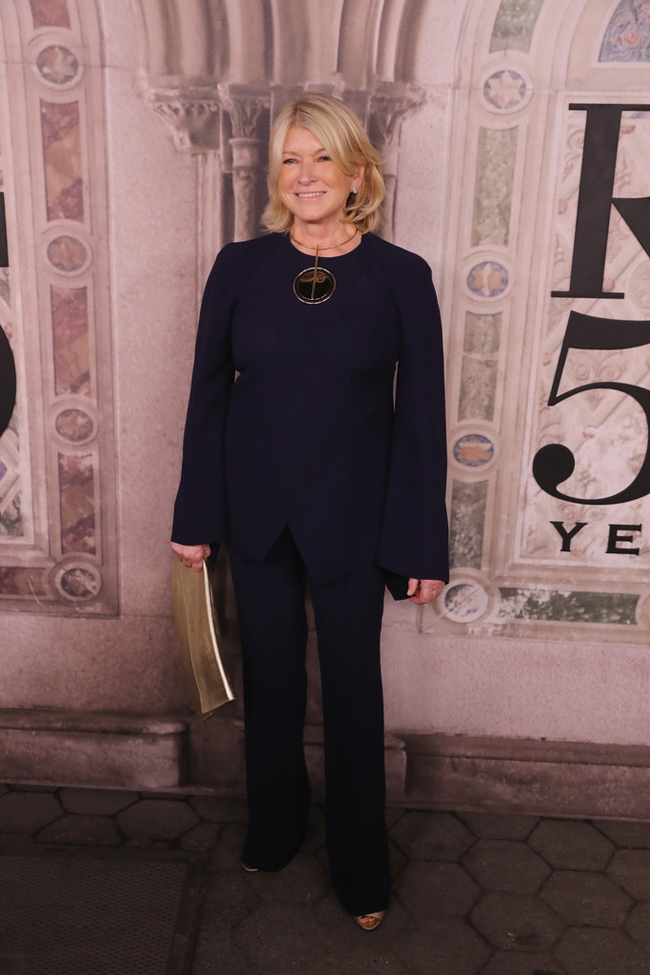 Martha wearing a navy suit at the 50th anniversary fashion show of Ralph Lauren in New York City in 2018. 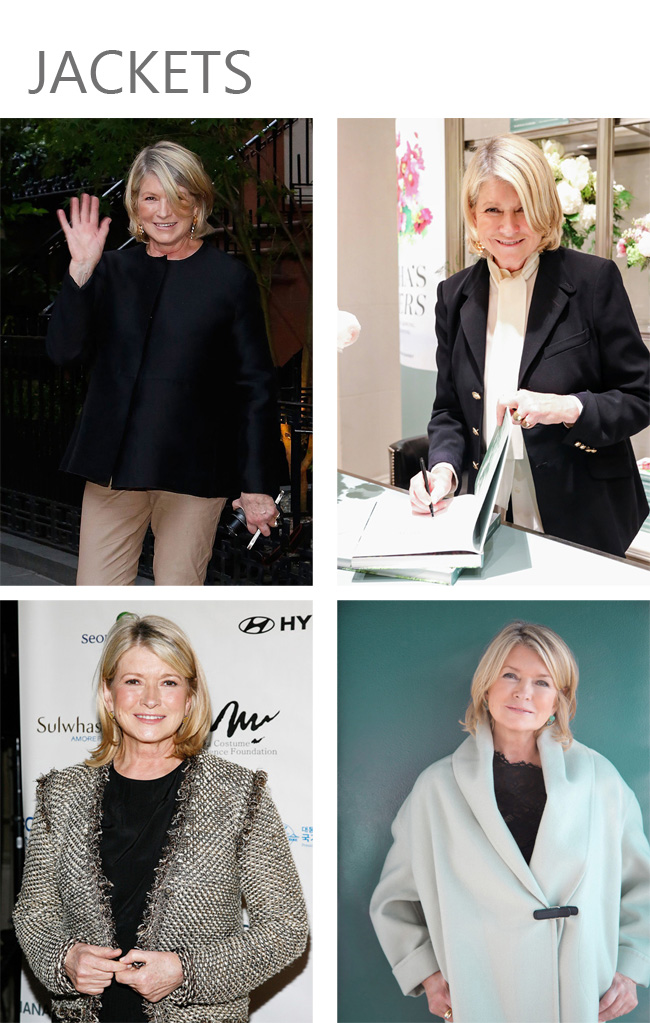 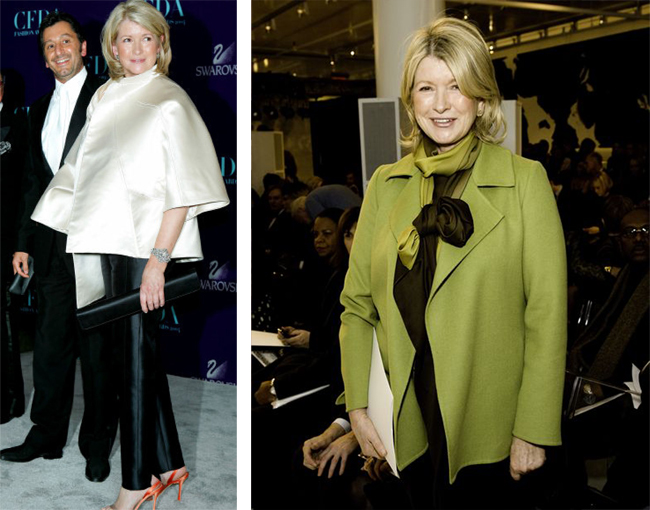 Martha, pictured at left with her favourite designer, Ralph Rucci, in 2004, and at one of his fashion shows in 2006. She looks terrific in his jackets. 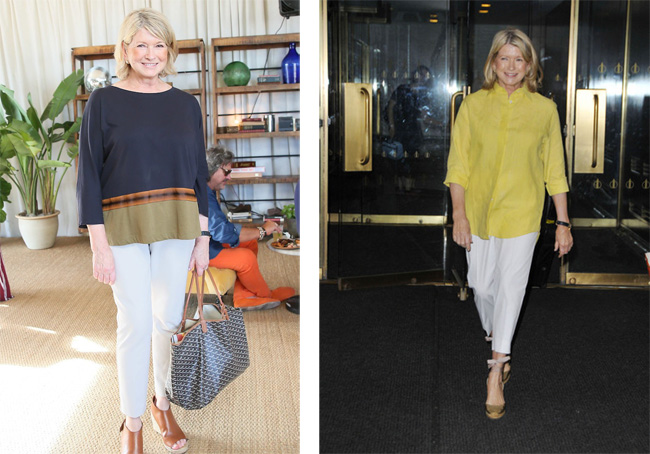 When she's not wearing jackets, it's simple blouses in luxurious fabrics. Button-ups are rarely fitted and fall gracefully from the shoulder in a loose-fitting A-line. Martha loves a good wedge heel but she's not averse to wearing stilettos when the occasion calls for it. (Fun fact: Martha colours the signature red soles of her Loubutin heels with black marker. She knows what she likes!) 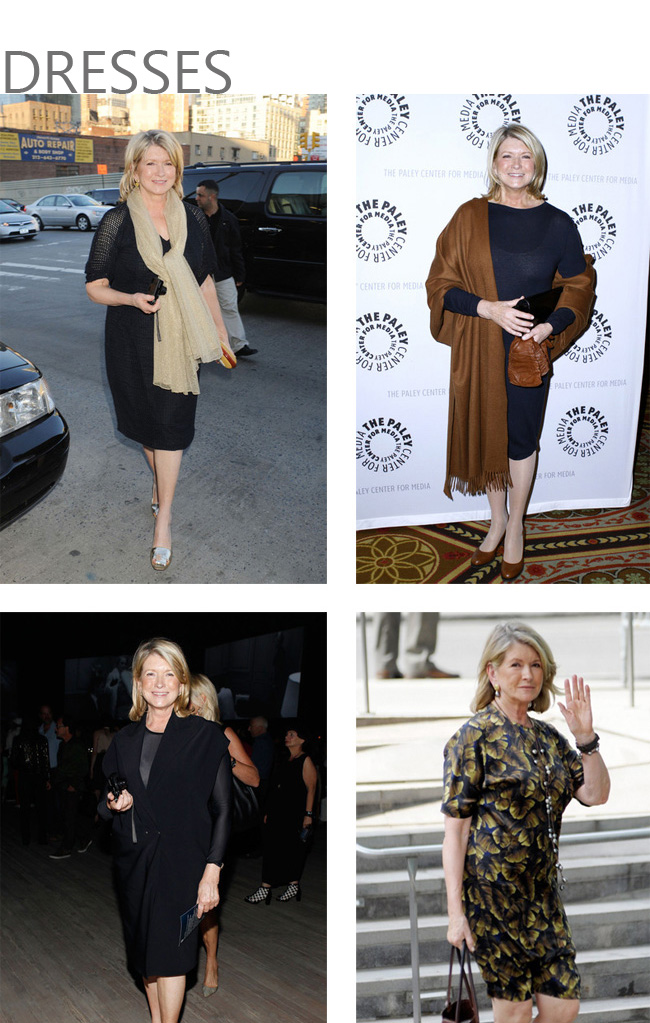 Martha will often wear dresses to events and outings. As we can see here, she frequently chooses mid-length dresses that end just below the knee. Again, her palette of choice is frequently monochromatic in shades that are darker but that have a mix of textures and fabrics. She is not often seen wearing prints, although the dress she wore to the funeral of her friend Nora Ephron, a celebrated writer, shown bottom right, is an exception. 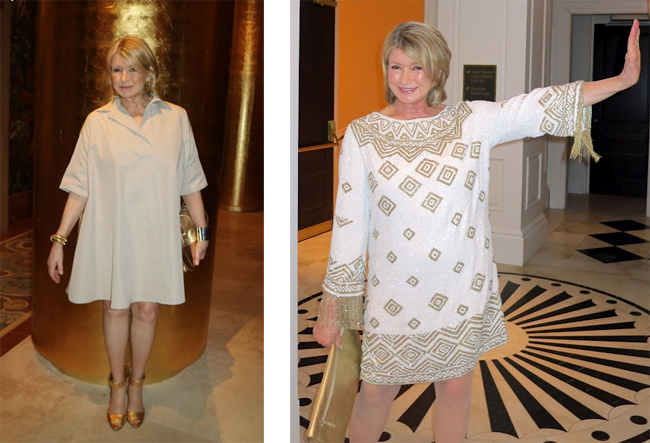 Dresses worn above the knee for women over 50 is generally considered gauche - another style rule Martha enjoys breaking. Conversely, you will rarely find a photograph of Martha wearing a maxi-dress; she's got great legs and she rightly shows them off. 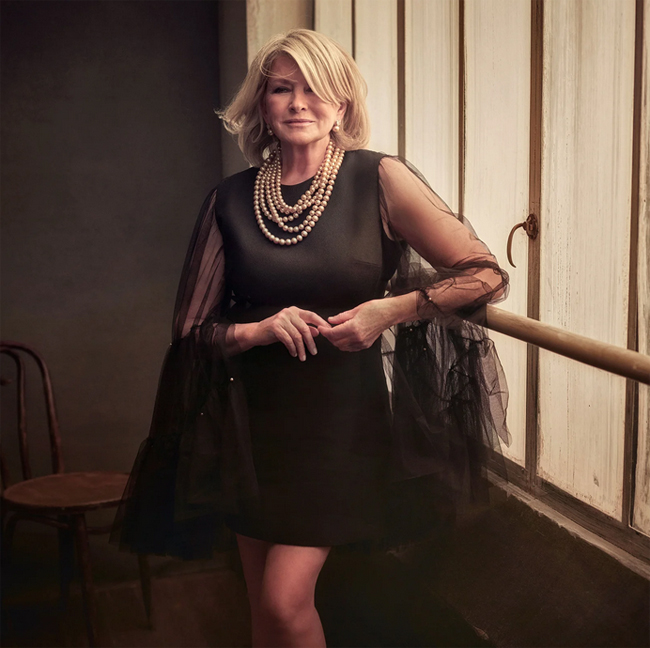 In this photograph by Mark Seliger taken for Vanity Fair magazine in February of this year, Martha looks stunning in a mini dress by Italian designer Giambattista Valli, which she wore to the magazine's Oscar party. (Martha is 78 years old, by the way, and looks utterly sensational!) 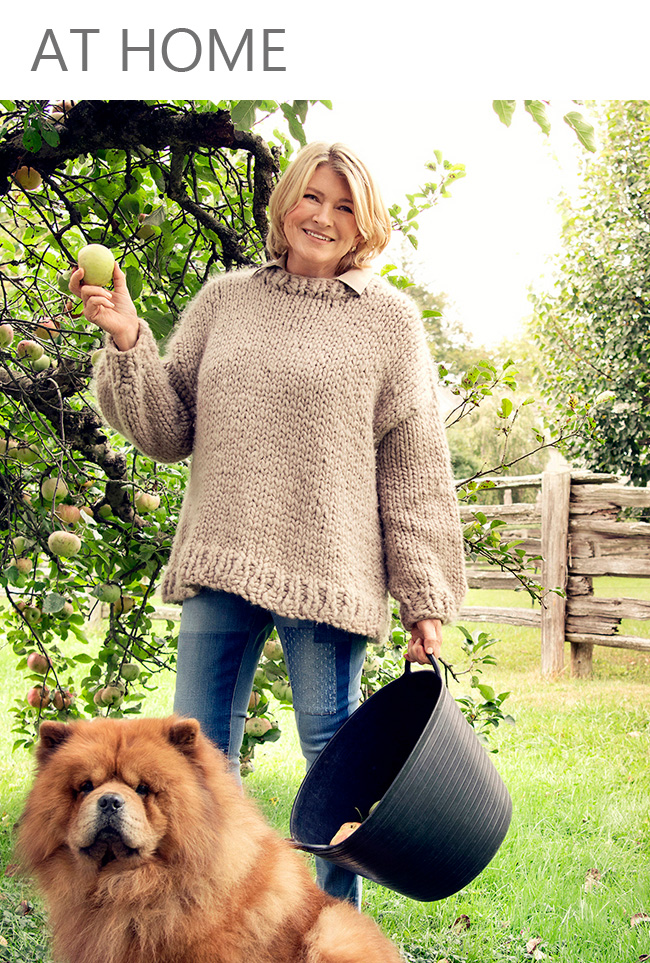 While at home at her farm in Bedford, New York, Martha wears what a lot of us would wear, I'm sure: jeans and sweaters. I've always loved this photo from People magazine - and that hand-knitted sweater looks so cozy. 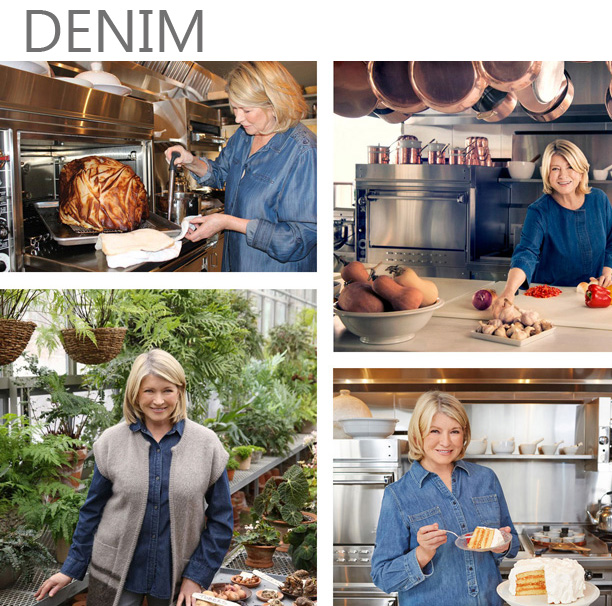 Denim shirts are a staple in Martha's at-home wardrobe. Ever since the mid-1990s when Martha would frequently wear denim tops on her television show, the durable, utilitarian fabric has helped to define her signature look. 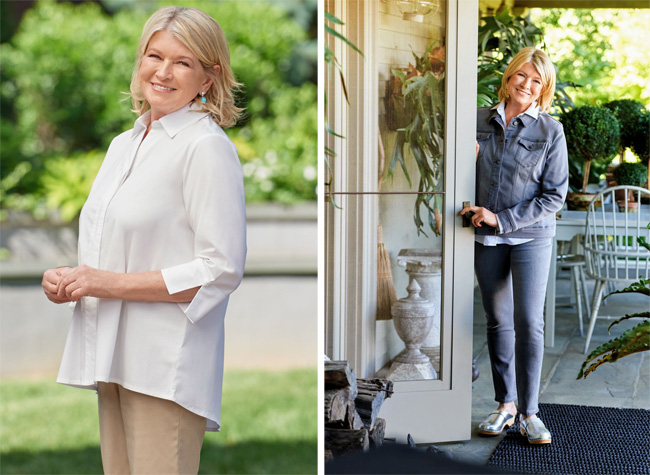 At home, Martha loves wearing items from her own clothing line, as shown above, which she sells on QVC. She also often wears sweaters in solid tones made of light wool and cotton blends, which are often paired with white collared shirts, below. 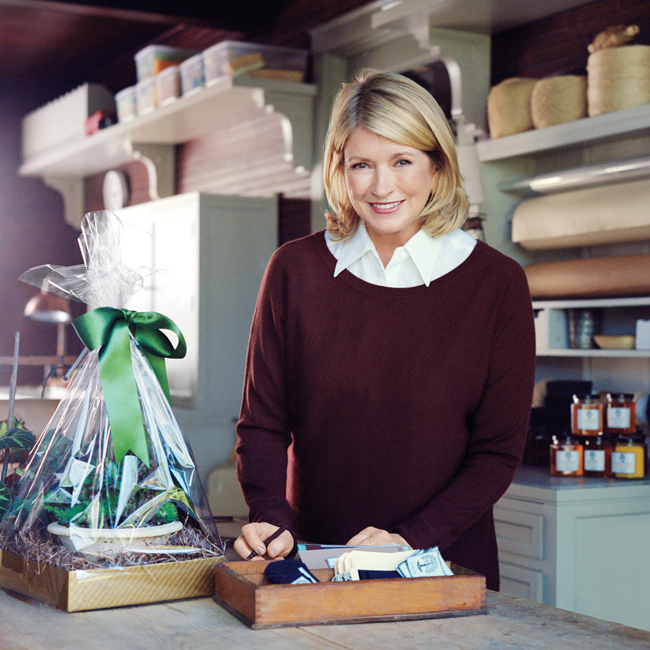 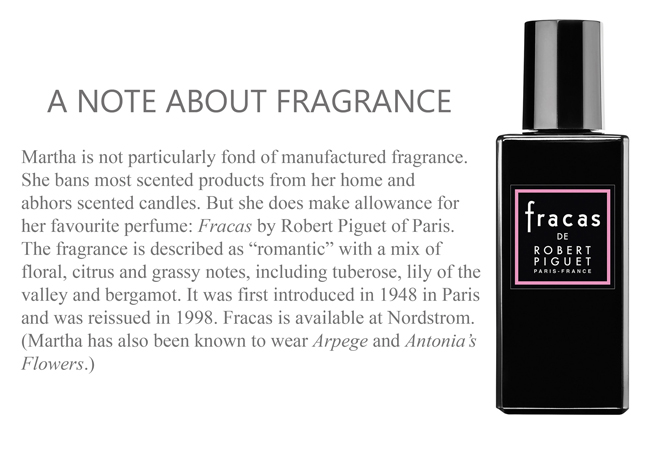 I hope you've enjoyed this look at Martha's style. Here are some of the takeaways:

Posted by ANDREW RITCHIE at 2:38 PM