Martha's next book will act as a great companion to "Slow Cooker", Martha's last cookbook, which was a national bestseller. "Pressure Cooker", which will be released on August 28th, was the next logical step for the food editors at Martha Stewart Living. The book promises to deliver more than 100 recipes you can try in both the stovetop and electric pressure cooker varieties, as well as the cult favourite, the Instant Pot, a Canadian invention. Not much more is known about the book, as it is still early days. As part of a series of cookbooks devoted to a type of cooking method/appliance, it's a unique offering in the Martha Stewart library. 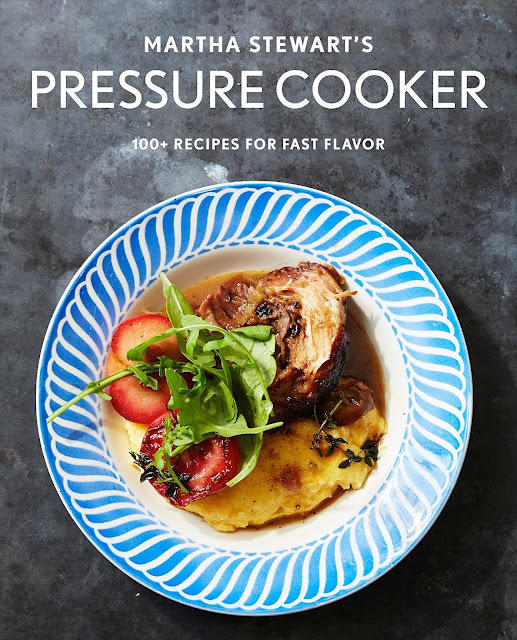 FROM THE PUBLISHER:
The kitchens of Martha Stewart present an authoritative volume packed with brilliant, effortless recipes that yield maximum flavor and require minimal time. Every recipe is rigorously tested, beautifully photographed, and will work for any type of pressure cooker. If you're new to pressure cooking, this book makes the experience foolproof and fearless. Dishes that once seemed like long weekend affairs or were too labor intensive to muster on a weeknight are now ready in a flash: braised short ribs that fall off the bone after only an hour; dried beans from scratch that skip the long pre-soaking process; and a creamy, perfectly cooked risotto ready in six minutes, without constant stirring. Martha Stewart's Pressure Cooker demonstrates the incredible versatility of the appliance with a chapter devoted solely to desserts, such as cakes, puddings, and more. Staples that traditionally require long cooking times, such as whole grains, dried beans, and stocks, are finished much more quickly and can be transformed into countless, easy meals that will serve you throughout the week.
Posted by ANDREW RITCHIE at 10:34 AM