It is rare to connect with a true artist. When that opportunity arises I am always thrilled. Last week I was able to interview Marcie McGoldrick, the former editorial director for crafts and holiday at Martha Stewart Living and I'm so pleased to be able to share her story and her work here on the blog. 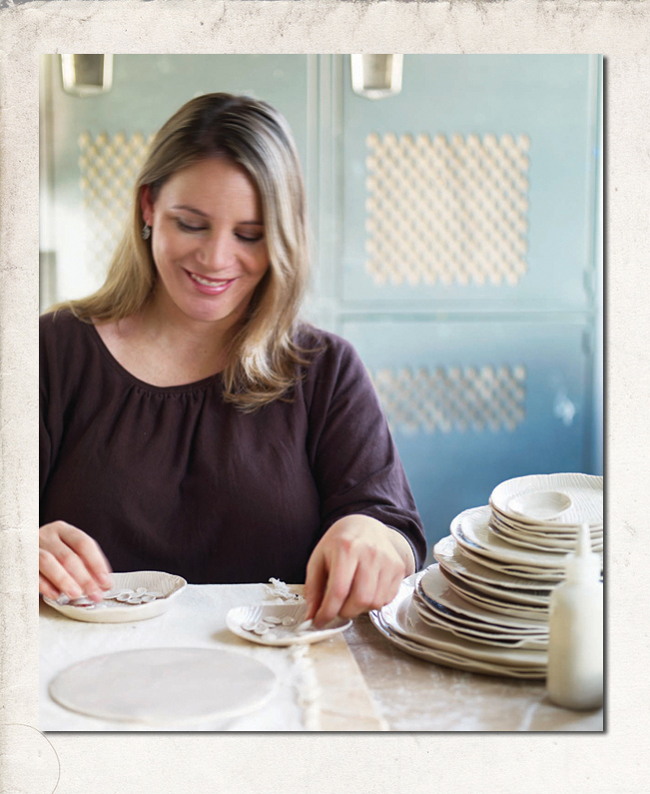 For those of you who loved Martha by Mail or any of the craft projects that appeared in Martha Stewart Living between 2002 and 2015 (and I know that's all of you!) then you probably have Marcie McGoldrick to thank. The Martha Stewart alum and Pratt Institute graduate (Masters in Industrial Design) began working for the company in 1999 as a product developer for Martha by Mail but soon transferred to the editorial department, putting her innate and learned skills as a serious crafter to work. 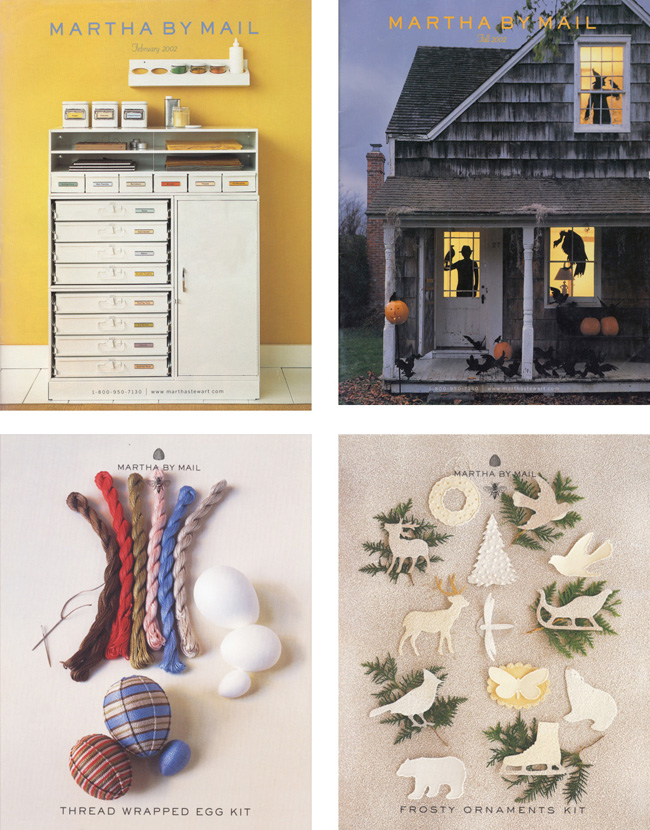 Many of the products and craft kits at Martha by Mail were designed by Marcie.

Marcie's first story was "Paper Bag Luminaries" which appeared in the fall, 2002, issue of Martha Stewart Weddings. Working closely with Eric Pike (former design director and editor-in-chief) Marcie honed her skills as an editor and was soon overseeing the Martha Stewart craft department, working with six others to interpret, re-interpret, imagine and re-imagine all of those holiday crafts and how-to's that so many of us have tried at home.

For the last 17 years - aside from her work at Martha Stewart Living - Marcie has been developing her skills as a ceramicist, using a small studio (and kiln!) in her Brooklyn apartment and selling her wares on Etsy and at craft fairs around New York City. Since leaving Martha she has relocated to Pennsylvania (her home state) and has started up a website to showcase her portfolio and sell her incredible ceramic work.

Marcie has been focusing primarily on two creative oeuvres: a collection of cameo jewelry and a series of porcelain eggs, which you can see below. In the interview, I found out more about her inspirations and her process. She was also kind enough to send me two photos of her studio and some of her work in progress. I'm sure you'll become just as enamored of her work as I am. Enjoy! 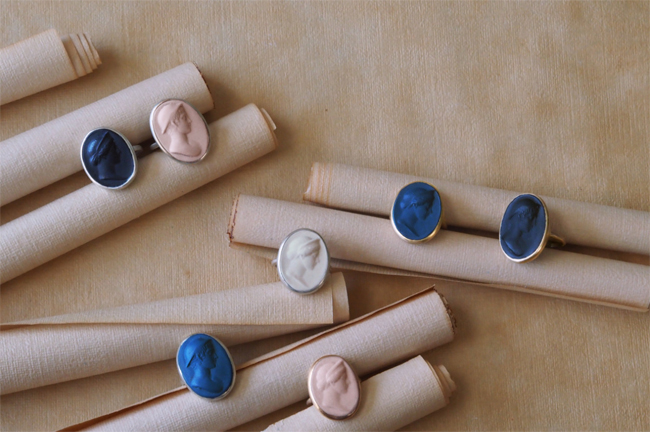 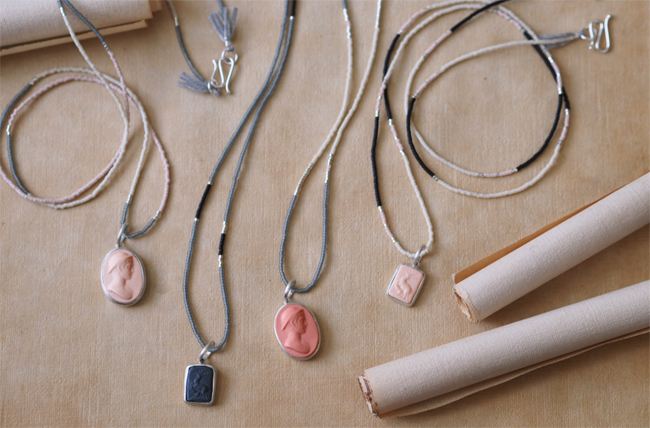 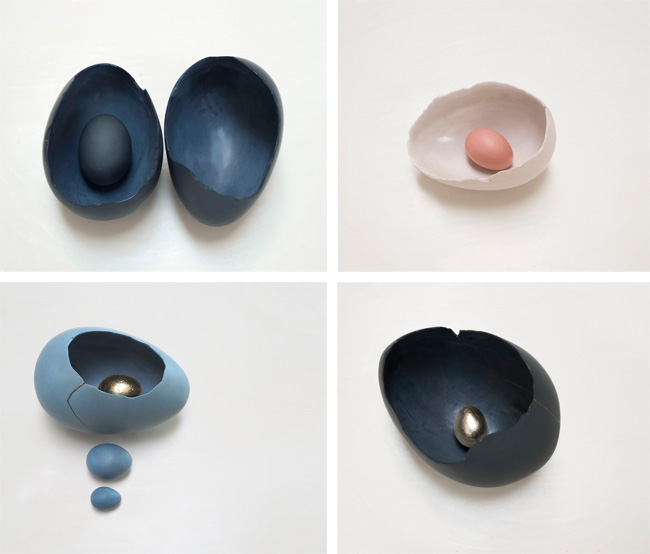 What is it about cameo jewelry that inspires you? Is there a personal connection to this style of jewelry or simply a love of the design and the creation process?
The answer is really all of the above.  I was initially attracted to intaglio rings, having seen some in really simple settings I was struck by how modern they felt.  At the same time, a friend had started collecting grand tour cameos.  In case you are not familiar, they are plaster replicas from Pompeii and Herculaneum, the original souvenir!  I decided to cast some of them in the porcelain colors that I had developed for bowls and plates.  Once fired the pieces were perfect sizes for rings and pendants.  The real learning curve was figuring out the casting and setting.  I had never worked with metal before, so it was a great opportunity to learn something new! 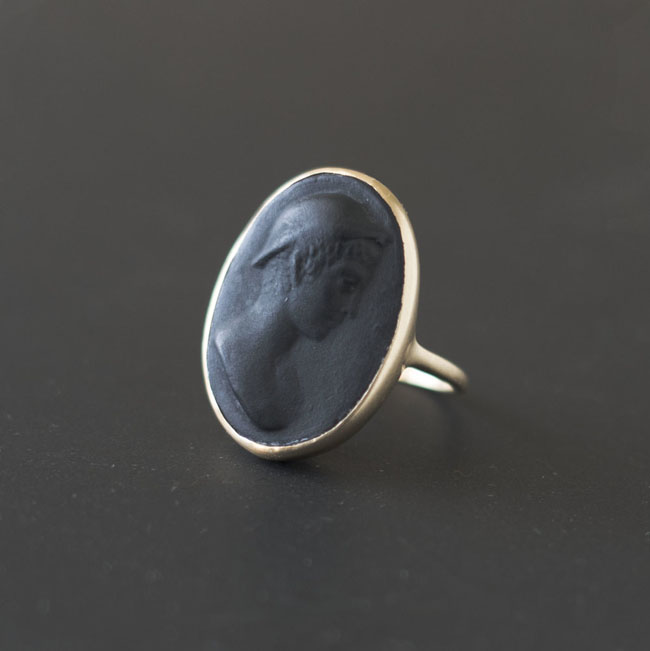 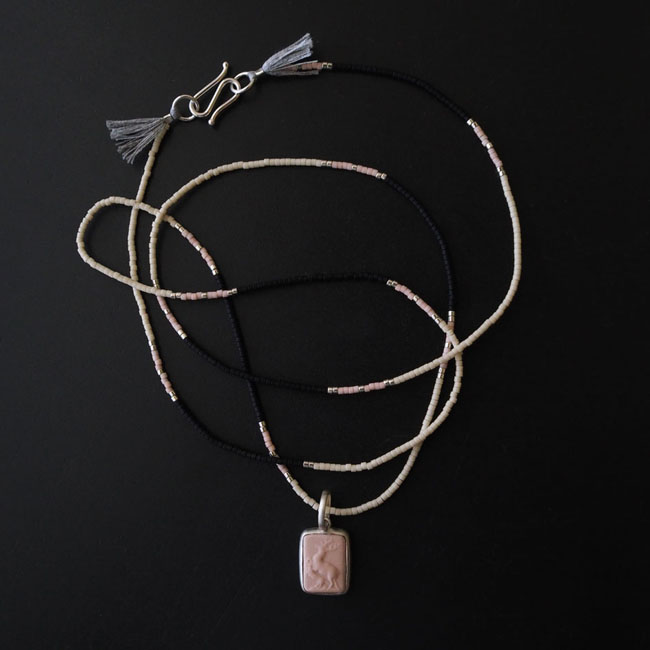 Tell me about the eggs! What inspired these gorgeous creations?

Last spring I decided that I wanted to approach a project without a specific outcome in mind.  There was no plan to sell them, it was just going to be an exercise.  At that point I was working out of my apartment in Brooklyn and only had a small kiln, so the eggs were a good scale.  I used wooden eggs and real eggs. I made plaster molds and started to cast them.  Since it was going to be more of an experiment, I used only clay that I had on hand.  Once cast, I cracked most of them and then reacted to the shapes created.  When you crack greenware there are sometimes surprises that don’t appear until they are fired.   I tried to approach these imperfections as opportunities, so I adapted a version of the Kintsugi repair method. [Kintsugi: the Japanese method of refining broken ceramics by highlighting their scars with gold or other metallic substances.]   Once I had made a few groupings, I decided to photograph them and put them up on the site. 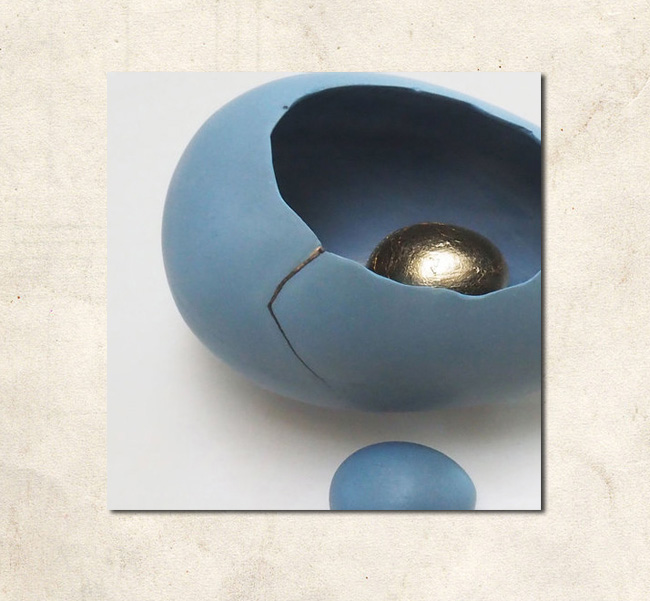 An example of kintsugi. 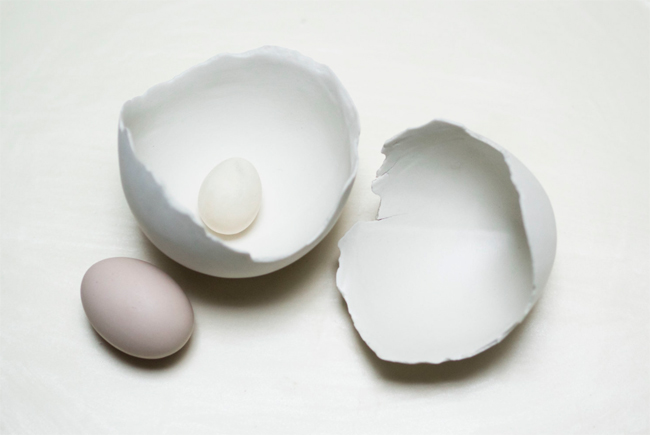 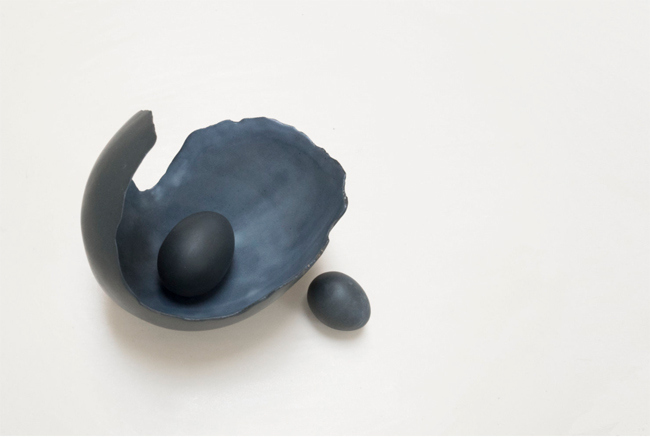 The eggs have obviously been very popular – many of them are sold out! Are there plans to continue the egg series?
Yes, there will be more up on the site soon but they are also available at John Derian Dry Goods in NYC.
Where do you make your creations? Is there a studio space?
For the past year and a half, I was mainly working out of my apartment in Brooklyn.  The size of my kiln really dictated the scale that I was working in.  I recently relocated to Pennsylvania and am in the process of setting up a studio with a larger kiln. 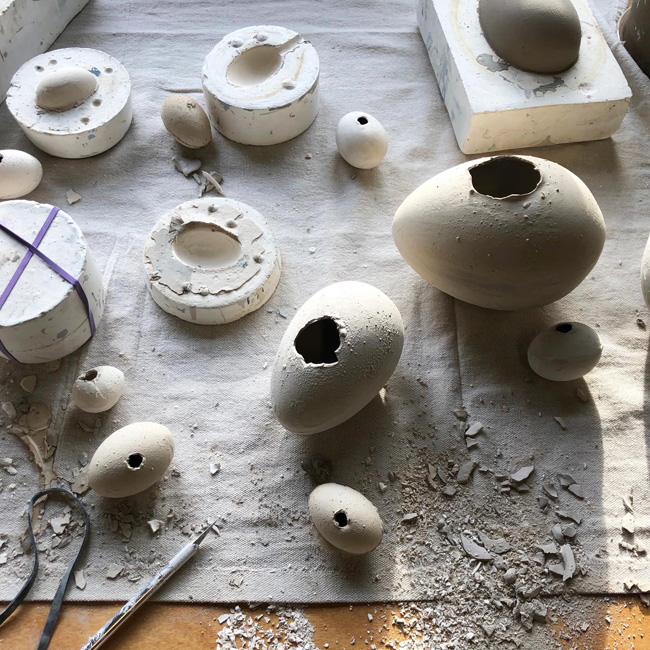 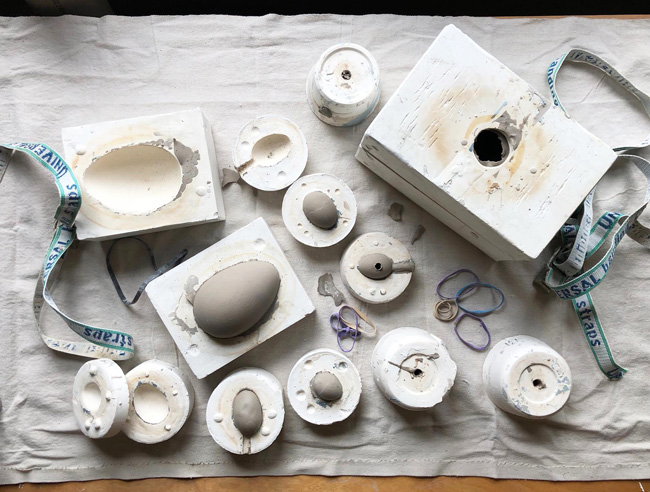 Marcie snapped these photos just yesterday! Exciting to see the work in progress!

Who are some of your mentors? Who are you influenced by?
I consider myself fortunate to have worked with some incredibly talented passionate people!  I learned so much from them.   As far as mentors go,  Eric Pike and Fritz Karch were certainly two of them.  They both have unique perspectives and generous creative spirits.  I learned so much by working with them and observing where they saw beauty in things.
As far as influences go, I think I am most inspired by Eva Zeisel’s ceramics.  I have collected her work for years and I think the biggest accomplishment would be for someone to feel about my work, the way I feel about hers.
The craft department at MSL, under your direction, was outstanding. What does the word ‘craft’ mean to you and how did you impart that meaning into the magazine and the products you helped create?
That is so nice of you to say!   As a department, we approached crafting as an opportunity to solve a problem and to learn something new.  Our goal was to create projects that were things that you wanted to keep or give.  The experience of making something and learning something new is invaluable but it should also yield something of value.
I’ve always wondered: What happens to the crafts after they are photographed and documented for the magazine? Please tell me they aren’t thrown away!
All of the projects were archived!  We would often use them for television segments, events and our merchandising team would also use them for inspiration.
Is there a craft that was featured in the magazine editorials – or a series of crafts – that you worked on that you were especially proud of? Any projects stand out as personal favourites?
That is a hard one!  I always enjoyed working on Halloween stories and would certainly count many of them as favorites but I think my favorite story might be the Christmas trees from December 2014. 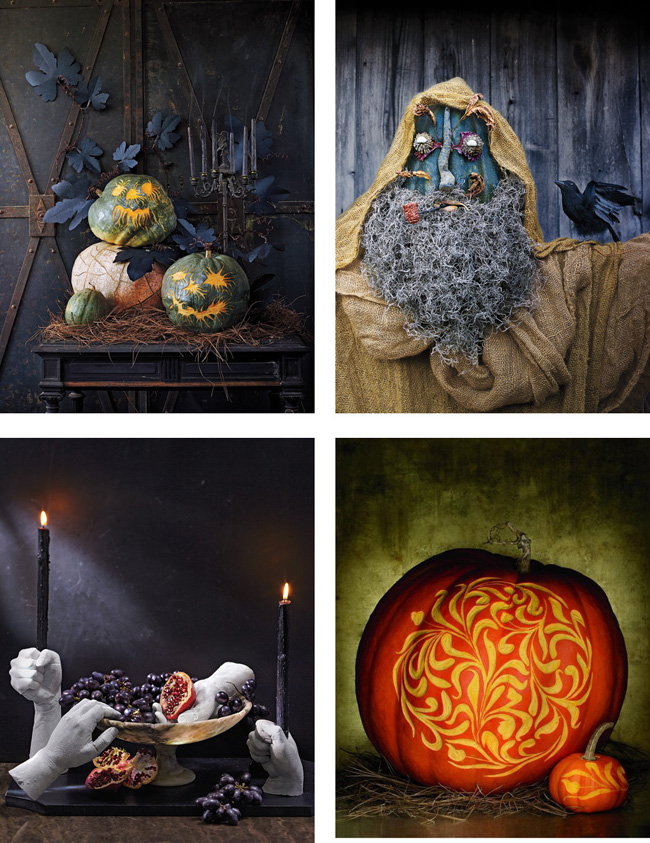 Some of the Halloween stories and craft projects Marcie created. 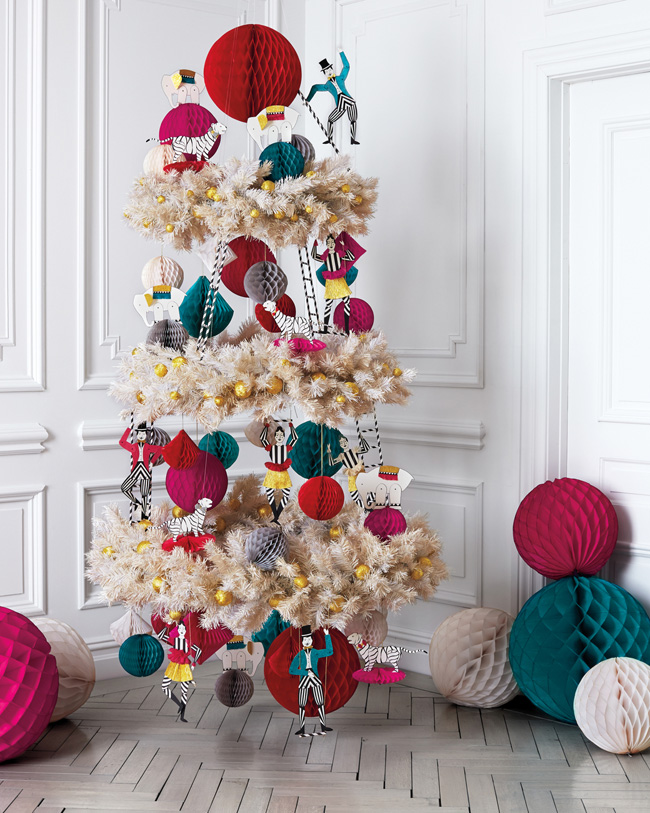 Marcie's Christmas tree from the December, 2014, issue of Martha Stewart Living. It was suspended, like a mobile, from the ceiling!
What is one thing you learned from Martha Stewart – the person – while you were there?
The thing that impresses me the most about Martha is her insatiable curiosity.  She continually wants to learn new things and improve the things she already knows. She is best known as a teacher but she is also a perpetual student.  I certainly learned the value of this philosophy and it has influenced how I approach my own work!

Be sure to watch Marcie's site for more work coming soon. Marcie also works as a creative consultant, freelance stylist and product developer. Thank you, Marcie!
Posted by ANDREW RITCHIE at 11:07 AM

Wow It is wonderful to see Marcie again, I remember loving her craft, following Martha craft on Twitter and her Etsy account. Love her ceramic work. Thank you Andrew for this beautiful post and interview. Wishing Marcie great success

Yes, I agree with the above.....wishing Marcie continued success. But also wish Marcie was back at MSL magazine where her creativity is very much needed in order to restore its luster.
APM