I really can't believe that it's been seven years since Martha Bakes began. It's such a great show - so instructional and fun. In this seventh season, which began airing on October 8th, Martha takes us through a veritable dessert buffet of regional delights from around the United States: tarts and cakes and pies and loaves, from the Midwest to New England, from the Southwest to the Great Lakes. It sounds like a great series. Be sure to check your local PBS listings to find out when it's on in your area. Click here to see the full 13-episode lineup for the season. 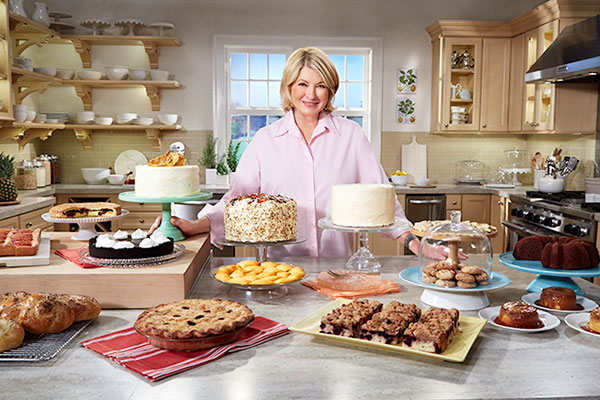 Are those Martha by Mail Cake Stands? Certainly have not seen those at Macy's. They have a jadeite-glass one but it's not like the one in that photo. Excited for the seasonal variation of Martha Bakes this season.

They are indeed Martha by Mail! She needs to bring that venture back!

Why has Martha overlooked the cannel? It is right up her alley. a small copper mold ,expensive and a baking process involving beeswax and and high oven temperatures. If she were to bake the cannel-- that would be the rage. Andrew have you heard of Mimi Thorinsson and seen her web page Manger. If Mimi and Martha met that would be something. Martha may move to Medoc. I move that Martha meet Mimi.