Where did the last six years go? I still remember hearing the news that Martha would be launching a new TV show centered on the art of baking. Now, the Emmy-Award nominated "Martha Bakes" is in its sixth season with a new roster of 13 episodes that begins today on PBS. 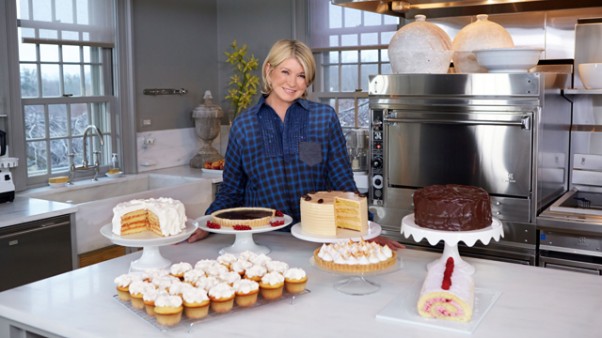 I know many of you will be glad to learn that this season of the show was filmed in the kitchen of Martha's home at Bedford - a warm and inviting space that makes it feel as though we are right there with her. The new episodes will feature some guests baking alongside Martha and a nice mixture of savory and sweet recipes, including classic white bread, French meringue, pizza dough and homemade donuts. Click here to read more about the show and the episodes to come!
Posted by ANDREW RITCHIE at 8:49 PM

Slightly off topic , but about Ms Stewart's programs.
I might be accused of repeatedly referring to the original MSL programs, but I have been watching multiple episodes on "you tube". Unfortunately they are not in episode order, not complete and in some cases segments are slightly out of focus, but still informative, creative and beautifully filmed. If there is no cable outlet for these shows, then why have full segments not been offered on Martha's web sight? I am sure there would be an audience and would still serve as excellent advertisement and PR for her products and books.
APM

PS for some odd reason the NYC outlet for PBS (WNET) never seem to start either of Ms Stewart's showes on the same schedule as other PBS stations.

Actually, the video segments themselves are available on Martha's website. You can find some in the Video Collections section (http://www.marthastewart.com/972518/video-collections), but mostly, they're found through searches. The videos, unfortunately, are not packaged as they originally aired on broadcast and cable television, but you certainly can find them on Martha's site.

(Hi, Andrew! Thank you for this blog! I visit regularly! Been a fan of MSLO for 7 years now. Live in Belgium.)

In response to the second comment: only the videos segments from season 1, 2 and 3 of Martha Bakes are available on marthastewart.com! There's nothing from season 4, 5 and 6 (except Alexis' Heart Cake and the Raisin Pie I think...). On the PBS website there's just very few videos too. That's a pity. I really love this collection of recipes and try most of them (the written recipes are available), but sometimes a video would be very helpful.

Thank you for taking the time to comment re my question. Unfortunately, while I have found video segments on Ms Stewart's site, they are very fragmented. Making it difficult/ impossible to just to sit back and enjoy an episode.
APM

SO much better in Martha's actual home! Seems more 'real' and I love catching glimpses of how Martha operates in her actual life and peeking at some of her possessions. Along those same lines, really loving Martha's new Facebook videos. Hopefully she will give us a tour of her basement and all of her collections at some point.

Martha fan in Belgium....not sure you have had the pleasure to view Ms Stwarts original TV show "Martha Stewart Living"from the 1990's if not, and although I complained (above) about them being not complete on you tube, I am sure you will greatly enjoy the show and in particular her baking/cooking segments.
APM

Great show. I like it without the guests better than with. I get tired of Martha talking about all of her possessions but never tire of her baking talents.

All I will say about Ms Stewart's comments on her collections is that I do not believe her comments are bragging , nor implying how successful she is, but a genuine interest and curiosity in an item and her wanting to explain/teach about it. I would rather believe that then a less flattering trait.
APM

I just wish that more of the Martha Stewart Collection was available in Canada. Was hoping for more than just bedding but hopefully we will get more in the near future.

This YouTube channel has many original episodes transferred from old home VHS recordings.

This one is my favorite, the second two episodes are her first thanksgiving ones, but they are not indexed, so you have to forward to them.

...and the holy Martha trail the original 1980a Thanksgiving special from PBS:

Yes Thank you....I have a VHS from PBS of "THE" show, unfortunately the tape as started to lose it's quality.
APM