Be on the lookout for a new special issue that will officially hit newsstands on January 3 - although some vendors in the U.S. are already selling it. It is an issue devoted entirely to organizing, containing all the best advice from the last 25 years of Martha Stewart Living magazine. There are 275 ideas for organizing every room in your house, from the entryway to the bedroom! (Notice the use of the Fling font for the title, which was used in Blueprint magazine: a nice bit of homage there!) 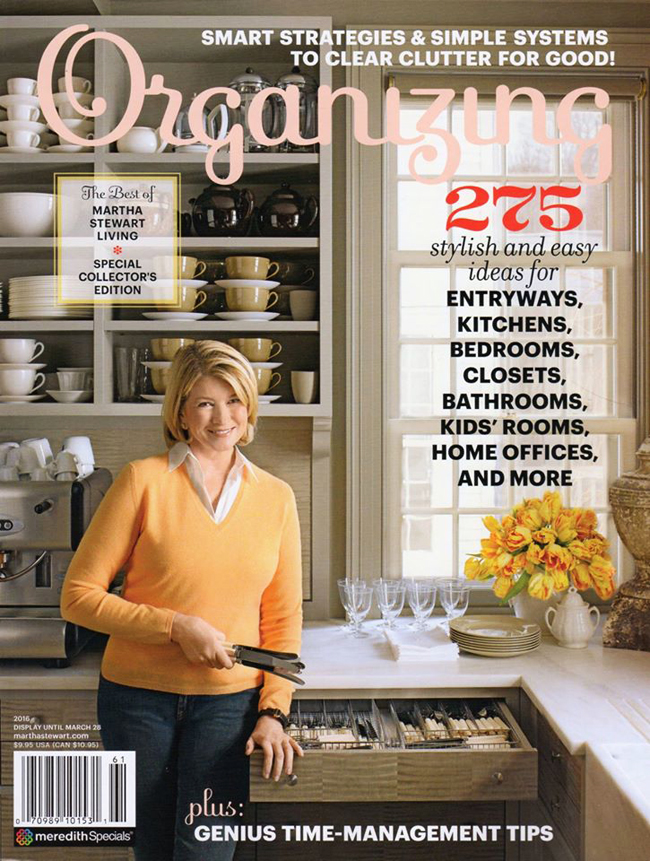 Sorry off topic, but I had to comment!
As a avid reader of this blog and Ms Stewart's daily blog I have found it odd the her blog has not , with the exception of one brief mention, shown her fans photos of preparations of her home or properity for Christmas . Her design sense has always been an inspiration for others and has been missed this Holiday Season.
Happy Holiday to All
APM

I agree about the lack of holiday posts on the blog. I was also hoping to see more of her new Facebook broadcasts. I loved the one she did for Thanksgiving and the one she did for cookie baking. THIS is the Martha I want to see. I would kill for her to give a tour of her famous 'prop basement' at her house or the 'prop closet' at her offices and let her tell us about all her collections and where she got things. I would be thrilled just to see her walk around her house (including the bathrooms and closets) and give a tour so we could see her house and what she has in it. I know we have seen many parts of the house but I want all the gory details! I also wish she would do a gardening show, although I must admit I am much less enthusiastic about her current gardens at Cantitoe. I much prefer the vibrant colors of Turkey Hill or even Lily Pond Lane. Martha has gone very monotone and austere in the last several years and I preferred when she used more colors---I guess we all evolve.

I agree about the gardens at Bedford, John. They are less painterly and fluid than her gardens at Turkey Hill or Lili Pond. Lots of rows of one kind of plant, then another kind, etc. It's more compartmentalized.

I'm having a hard time finding this issue except for one copy I saw that sold on eBay. I don't even see it on her website.

It is sold at all large book stores, such as Barnes & Noble. Also, try Amazon.

Will this issue be available as digital version in the future?

No it will not.