With the new Everyday Food special issue out on newsstands this week, I thought I'd look back at the previous Everyday Food special issues. It occurred to me that some of you may not be aware of them. None of these issues were part of a subscription and were only available for a limited time at the newsstand. The first one was issued in 2006. It was a special holiday cookie issue with recipes not contained in any other Everyday Food issue. The following year, it was all about holiday baking. It was not until 2011 that the third special issue was released. This one was devoted to summer recipes and was unique in that it was a full-size issue, unlike its digest-sized cousins. Finally, longtime subscribers were gifted a special Everyday Food Index: a reference for the first four years of the magazine's publication. It was never sold to the public. A second volume of the index was offered the following year. This is very rare today. These issues can occasionally be found on eBay. Watch for the new Everyday Food special issue on stands this week! 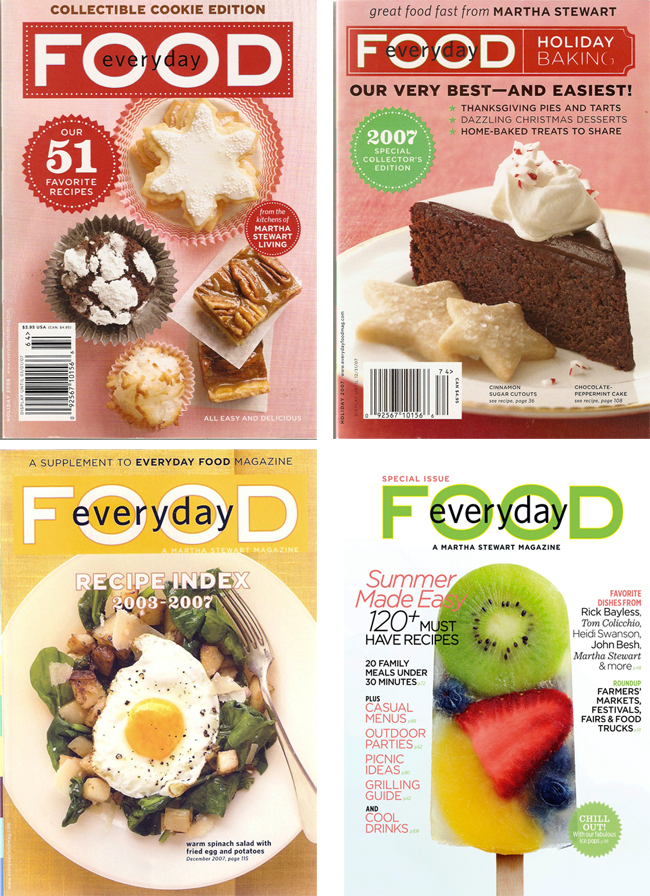 Posted by ANDREW RITCHIE at 9:06 AM

Another reader of your blog commented this issue was almost a duplicate of an earlier " special" edition of Everyday Food .
May I ask if others agree with the comment ?
I am asking as, if correct, it would seem to be a very poor way for Ms Stewart's corperation to treat her fans.
APM

I have to disagree with the statement that the current special issue is "almost a duplicate" of prior issues. I find the layout fresh and different. There may be similar recipe choices - but with a theme of "summer" that isn't surprising. I believe this issue is well worth a purchase and adding to a "Martha" library.

I don't see how you could disagree. When you look at the recipe index for the new issue, 85 of them appeared in the previous summer special issue. Also, the feature articles about the Pioneer Woman, etc. are all the same. I'm not saying it's a bad magazine, but there's very little new content.

Greetings from London Andrew
Beautiful issues. So happy to hear of new issue on stand. Will check for it.
Thank you xo

Hello Andrew, I am a subscriber and contributor to Good Things by David, and a member of the Martha Moments and the MBM FB groups. Is there anyone in particular you might know of who might have an extra copy of the Dec. 2006 Collectable Cookie Edition as shown above. Thanks in advance for responding. Tina Lee

@Tlee1 I'd be willing to part with my copy! Please send me an email. andrew_s_ritchie@hotmail.com