Martha's Triscuits: Have You Tried Them Yet?

Perhaps it seems a bit silly to get excited about a cracker, but when Martha's face and name are on the box, well, I get a little tingly. To my knowledge, this is the first collaboration between a cracker-maker and a celebrity chef. It's kind of a brilliant idea! Triscuit approached Martha Stewart Living last year about a collaboration. It began simply enough with a few web videos showing Martha preparing regular Triscuit crackers with various homemade toppings to serve as hors d'oeuvres. By late last year it was announced that a new Martha Stewart Triscuit flavour would be hitting store shelves this month. 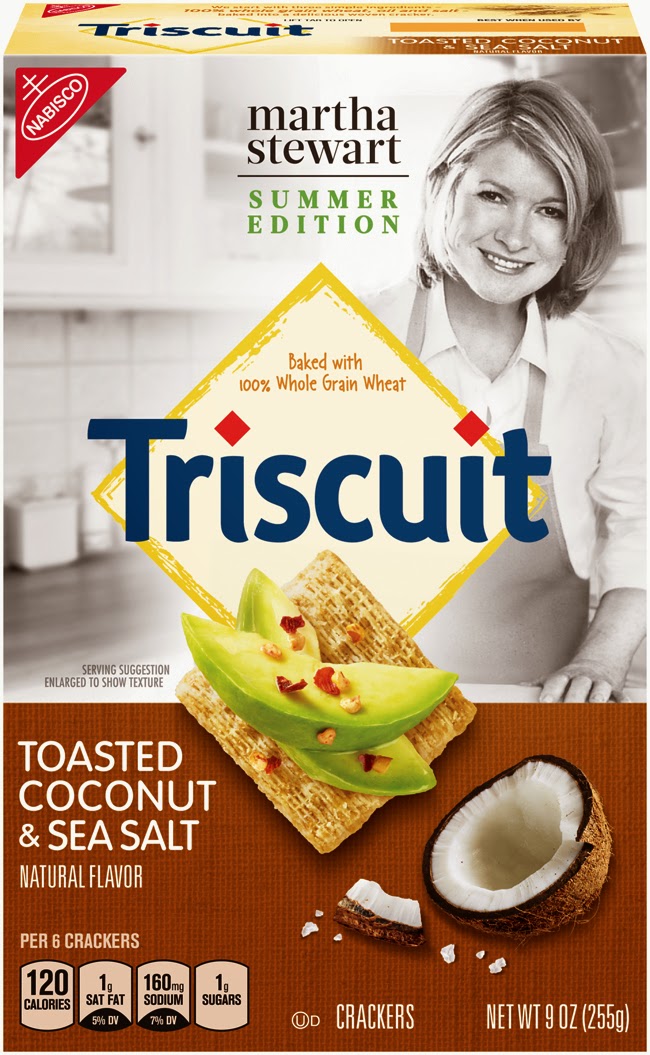 It is the flavour that really sets the cracker apart from its competitors: toasted coconut and sea salt. Martha and her team played with a variety of flavour combinations and settled on this one because of its potential as both a savory and sweet snack. It was Martha's choice, ultimately, and if early test-market results are any indication, it was a successful one.

People have written in to Martha Moments saying they picked up ten boxes at one time (Martha's Triscuits are only available for a limited time - throughout the summer) and that the combination of the salty with the sweet coconut is addicting.

While the cracker on its own is a tasty snack, Martha suggests a number of toppings for the cracker: avocado slices with hot-pepper flakes or crab meat with a splash of lime juice. For something sweet, she suggests melting a square of milk chocolate on top and adding a toasted marshmallow for an instant s'more. Sounds good to me!

I have not seen Martha's Triscuits anywhere in Toronto yet. (Perhaps they will not make it to Canada.) If anyone does see them, please let me know. They are popping up in grocery stores all over the U.S., however, so go out and look for them and let me know what you think of them!

I'm not sure if there will be more Martha-inspired flavours from Triscuit, but I hope so!
Posted by ANDREW RITCHIE at 8:29 AM

I am in Kelowna, BC and have not seen them in stores yet either. Sheesh we Canadians may be out of luck!

I have not seen them in the store as of yet. I would hope Nibisco has taken advantage of Ms Stewart's vast array of recipes and include them on the back of the box. In addition the finished hors D'oeuvres are accompanied by MSOL beautiful serving photos.
APM