This evening, Martha Stewart's Cooking School was awarded its second James Beard Foundation Award for Best Cooking Show in Studio or Fixed Location. The program, which is entering its fifth season, won in the same category last year. Cooking School airs weekly on PBS and beat its two competitors in the category, Bobby Flay's Barbecue Addiction and Sara's Weeknight Meals with host Sara Moulton. Martha attended the awards ceremony and is shown below with her medal. Congratulations to Martha and the entire Cooking School team! (Martha's other PBS program, Martha Bakes, is nominated for two Emmy Awards! Stay tuned! The winners will be announced in September.) 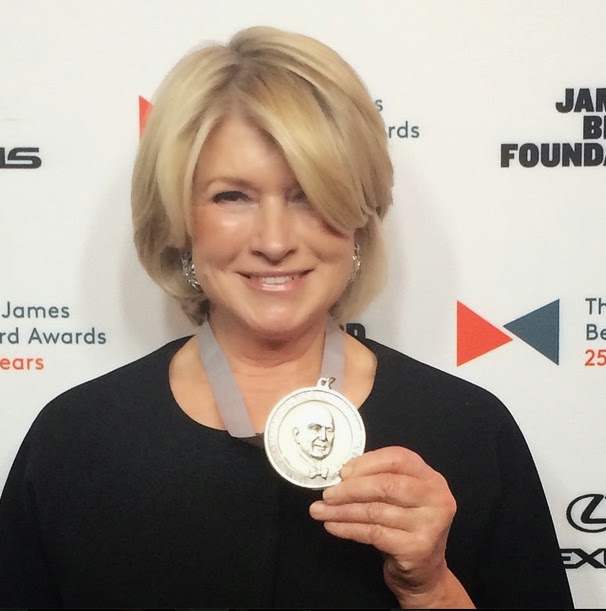 Posted by ANDREW RITCHIE at 9:50 PM

If one compares the sets and demeanor of the cooking segments of Martha's Lifetimes show series vs the PBS series... to me, the PBS version is lifeless. The production value is measured by technical finesse no doubt, but the charm that is the word i was looking for, the Charm of the earlier segments on cooking in the Lifetime series is not there to me in the PBS show. Yes, cooking shows are very popular and I suppose MS is up against the likes of Barefoot Contessa, Rachael Ray, Sara Moulton and others. Is the only time martha cooks is when she is in front of a camera? So Andrew When will you start a you tube series on some subject that you will present?

For more information of the James Beard Award visit their wen site. One of the Public relations agencies for the JBA is Susan Margrino (sp) is this martha's PR agent???


Re the above (first) comment
Ms Stewart's demeanor on her PBS show is calming/confident and illustrates complete control of what is being prepared. It is equal to her Martha Stewart Living segments which set the bar for all other cooking shows on the Food Network. I will agree that the set is lifeless and I would appreciate a more detailed presentation of the completed food, but in general it is an excellent show.
Re the second comment re Susan Margrino connection to the Beard Foundation, I guess there are some who will see a conspiracy at every turn. All I see, by Ms Stewart's win, is an excellent show being honored.
APM

Congratulations to Martha and her team. She looks beautiful.
Amazing show I watched couple of episodes online. I wish we could watch it in London and the Middle East.

I have just finished reading the article which you wrote on Time martha cooks, Cooking segments & PBS version. I want to tell you you did great job
Online Assignment Writer