It's thrilling to hear that season 4 of "Martha Bakes" will be commencing on January 10th! It is one of the best shows that Martha has ever produced, in my opinion, and I've learned so much from it. I love the educational format of its presentation and the demystifying techniques that take all the fear out of baking something a little more advanced. 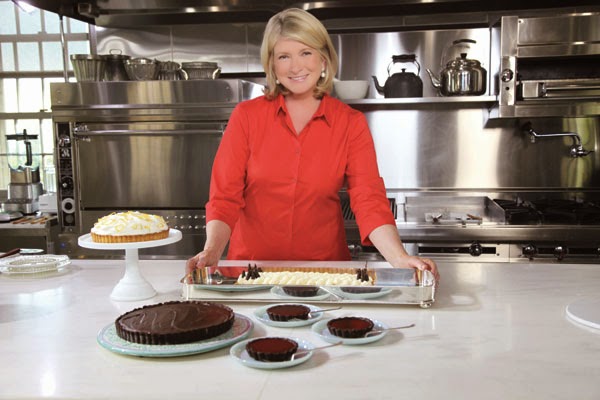 The fourth season of Martha Bakes follows three successful seasons that have vaulted the series into the top ten cooking shows on public television since it premiered in April 2013. Average weekly audiences increased by 33% from 2013 to 2014. Martha Bakes is the most visited show on PBS's digital cooking portal, PBS Food, and recipes from the show consistently rank among the top viewed recipes on PBS Food. The series has been viewed in 95% of U.S. television households, according to TRAC Media Services.

Now all we need is a gardening show!!

Posted by ANDREW RITCHIE at 9:53 AM

Hi Andrew, wonderful news and congrats to Martha on a very successful show. Unfortunately I can't watch it in London or Kuwait. I wish I can prescribe to the channel online, do you know of a way Andrew? This is another wish of mine in 2015.

Hi Rowaida! As far as I know, PBS shows are only played in the US and Canada. You can probably see clips at the PBS website and on marthastewart.com, but not the full episodes. I'm hoping she releases a DVD compilation of some (or all) of the episodes!

When she does it well there is no one better. I saved all the shows on DVR until I have time to view them with the companion book in hand. If the recipe is not in the book I print it off and make notes. I agree a DVD would be perfect. Maybe we can petition for this.

@celkalee: I know that PBS put together several DVD compilations of Julia Child's "The French Chef" program so I imagine that it's only a matter of time before they do it for Martha's popular shows. (If not PBS then Martha's company could hopefully take the reins on the project.)