Ever since I was young, I was enamored of the ginkgo tree. I love the shape of its leaves and the uniformity of its signature vibrant yellow hue during the autumn months. It seems I am not alone, either. The tree, also known as the maidenhair tree, is native to China and was considered beautiful enough to be planted on the sacred grounds of Buddhist temples. It was first cultivated in North America in 1784 in Philadelphia and is now planted worldwide as a landscape plant.  The fan-like shape of the ginkgo leaf has been used as a decorative motif for centuries: from furniture to jewelry, wallpaper to textiles. 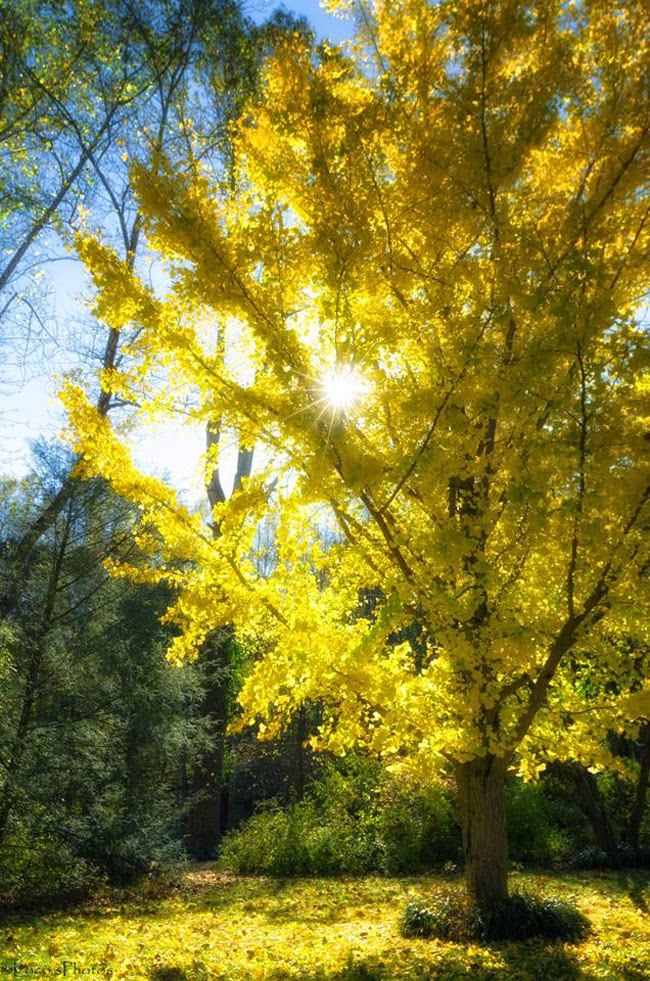 My friend Lori Coleman photographed this ginkgo tree in her back yard last month. Lori, who lives in Culpepper, Virginia, shares my love of ginkgo trees. I love the light in this shot and the vibrancy of the yellow leaves.

The ginkgo’s charm may lie in its resilience. It is one of the oldest trees in the world. Modern ginkgoes are virtually the same as fossil specimens of the same species dating back more than 100 million years. The only plant older than the ginkgo is the fern. Much like the fern, the ginkgo reproduces itself using ovules that are fertilized by motile sperm, which are released by pollen grains when the tree germinates. There is a ginkgo grove planted not too far from where I work and I love visiting it this time of year on my walk home to marvel at the swatch of vibrant yellow and the striking shape of the fallen leaves.

Martha also loves ginkgo trees and has many planted at her farm in Bedford. Below are some beautiful examples of the ginkgo - both in its natural state and as a decorative motif in art, furniture and textiles. 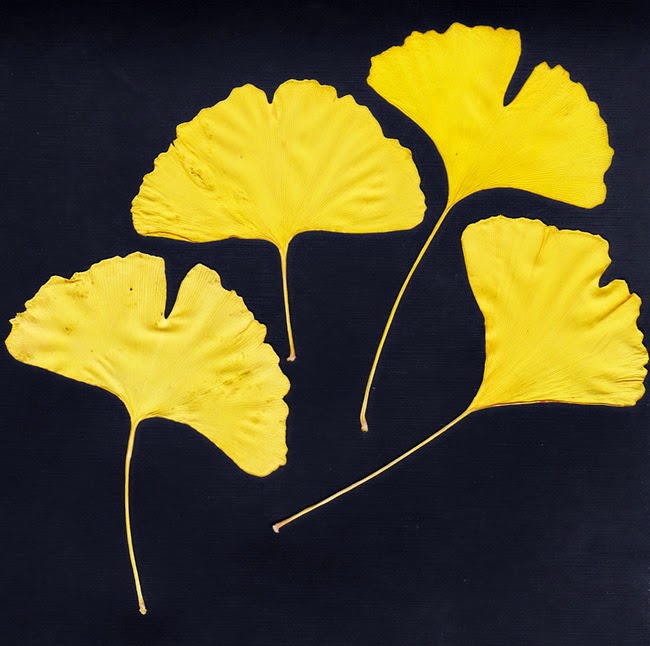 I collected these ginkgo leaves several weeks ago at a park near my home and pressed them to preserve them. They look striking against this black background. 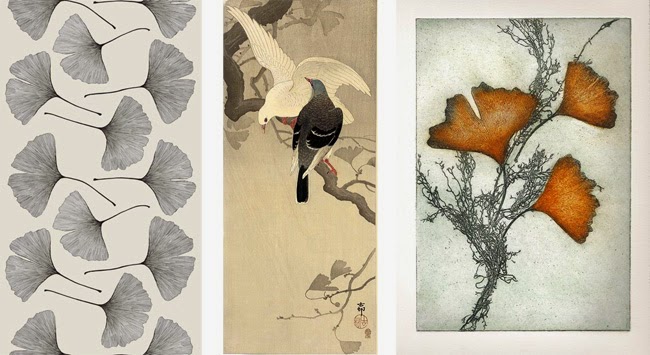 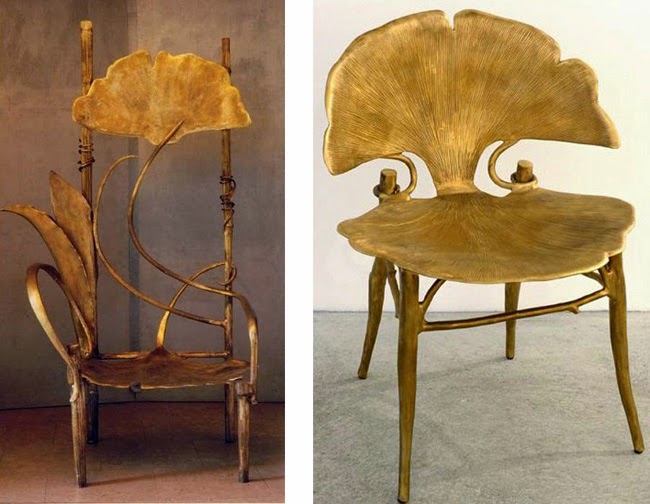 These Art-Nouveau style chairs are made of cast bronze by Parisian-born artists Claude and Francois Lalanne. They use the ginkgo motif in their work to striking effect. 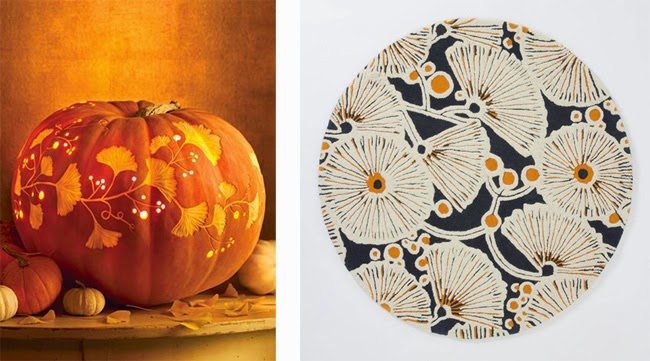 This ginkgo-motif pumpkin was the starring attraction in the October, 2010, issue of Martha Stewart Living. The rug on the right from Anthropologie is called the Tufted Ginkgo Carpet. 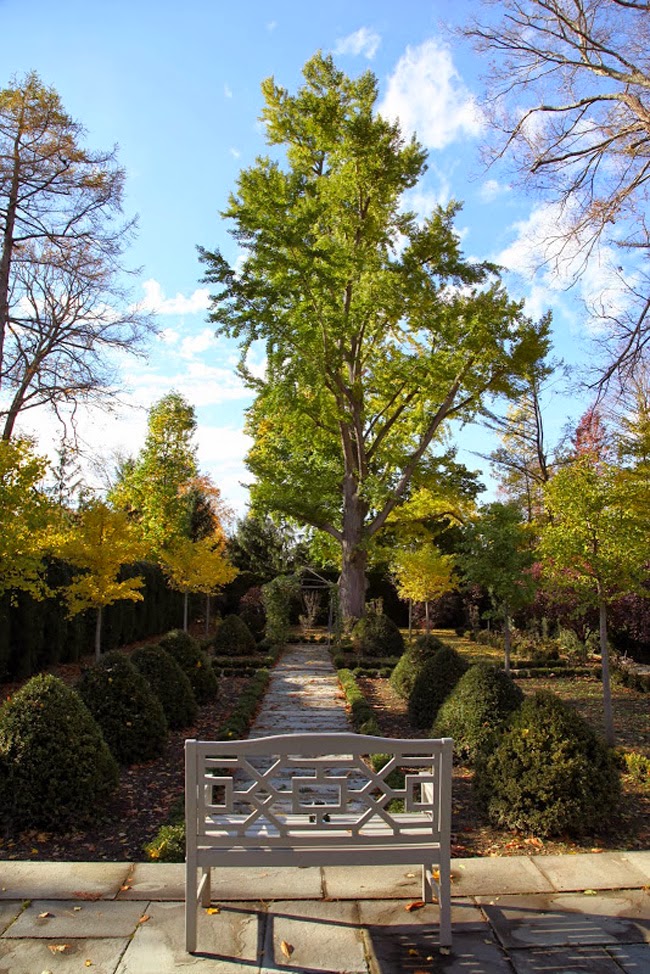 Martha's ginkgo tree is original to her property in Bedford, New York. It is more than 250 years old with a trunk measuring more than 13 feet in circumference. Martha has designed a 'boxwood room' adjacent to her Summer House with the giant ginkgo as its centerpiece. She has planted several more ginkgo trees along the perimeter.
Posted by ANDREW RITCHIE at 10:35 AM

PS I sent Gael, Jodi Levine and Blake Ramzi on Instagram about your new profile. It is wonderful to have you there.
Best wishes xx