Martha Stewart has begun to make appearances to promote her upcoming book, One Pot, which is all about what the title suggests: cooking meals in just one vessel. It is a simple, quick, economical and delicious way to cook - especially for families. The book is officially released on September 23 in book stores everywhere.
Martha Moments reader and longtime Martha Stewart fan, Bill Makela, attended Martha's cooking demo and book signing at the Macy's in Chicago, located in the historic Marshall Field store on State Street, this past weekend. He bought a copy of the new book and had it signed by Martha. He wanted to share these photos of his experience and I'm happy to showcase them on the blog. Read more about Bill's day below. (I got to meet Bill last year when he attended the Delicious Food Show in Toronto, which you can read about here.) 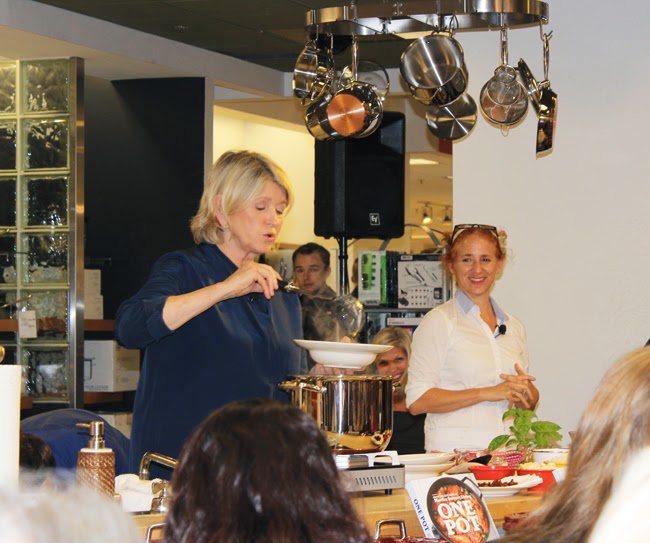 Assisting Martha during the demonstration were MSL food editors Sarah Carey and Thomas Joseph. Martha answered questions from the audience as she cooked. She proudly told the crowd that Alexis, her daughter, cooks every meal of the day for her family from scratch. 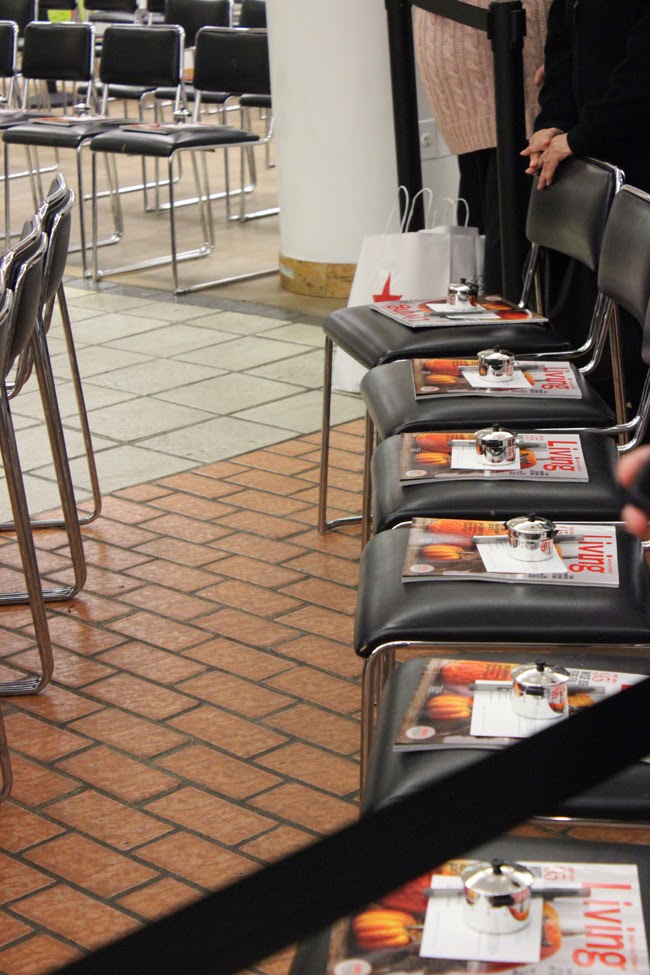 Bill was lucky enough to snag a seat in the fourth row. Audience members who were seated received a copy of the October issue of Martha Stewart Living, a cooking timer shaped like a stewing pot and recipe cards. Bill also got to enjoy samples of Martha's cooking during the demonstration: Arroz Con Pollo, then Linguine with Tomato and Basil, and finally, Corn and Shrimp Chowder. 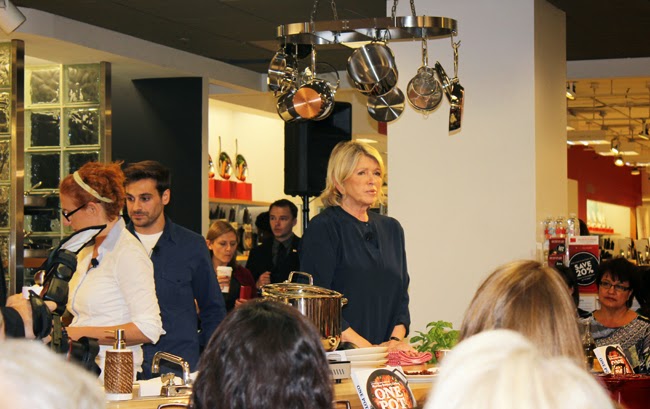 Martha thoughtfully answers a question from the audience. 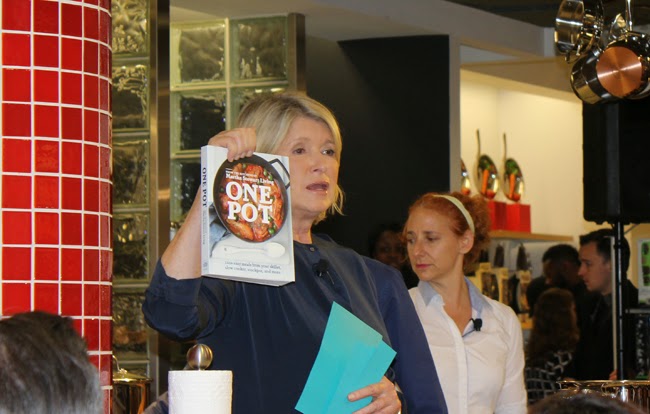 Martha says she is very happy with this book and its collection of recipes. 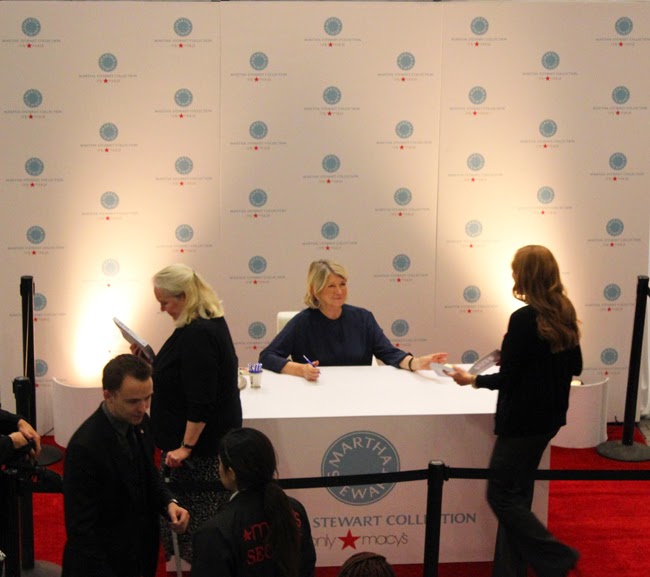 After the demonstration, Martha took some time to sign copies of her new book. 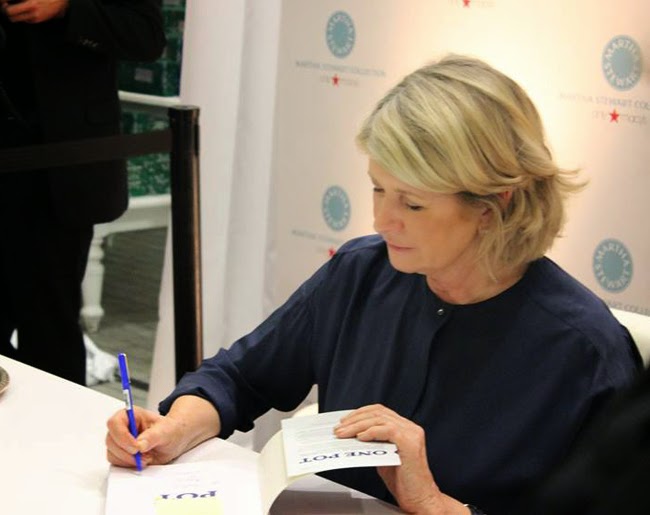 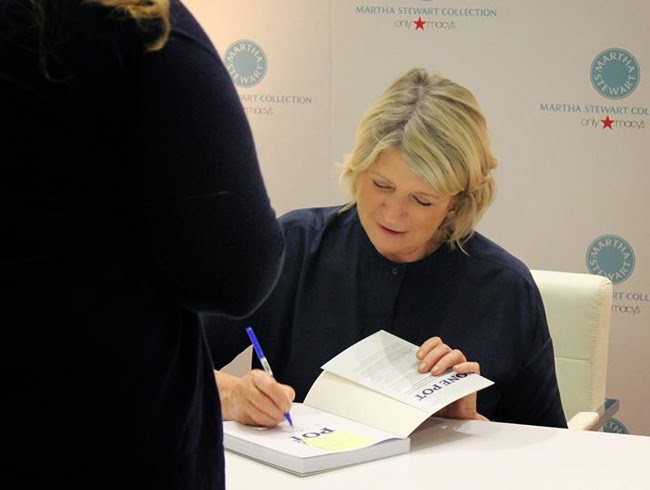 Well, good to read about Martha and her time at Macys in Chicago and she does look elegant in Navy.

Do you happen to know Martha's book tour schedule? I googled, but I have come up short for an actual list. I am curious to know if she will stop in SF. The last time she was here was for Entertaining.

I'm not sure about the full schedule, but I know her next appearance will be at the flagship Macy's store in Manhattan on Tuesday to celebrate the official launch of the book. She seems to be doing this tour in partnership with Macy's.

Best way to find out would be to ask your local Macy's if Martha's coming sometime this fall.

I'm pleased, and frankly relieved, to see Martha looking less than airbrushedly perfect at this event. She's a 73-year old grandmother who is promoting a new book about one-pot cooking -- she is finally starting to look like who she is, and not someone who is impossibly perfect, impossible to emulate. Thank you, Martha!

Marc, These two signings were the only ones I saw-- Chicago and NYC. Check for "events" at your local Macy's, or call Macy's PR. I found out from a Facebook listing from MSLO. Otherwise I might have missed it.

I have seen plenty of images on blogs posting pictures from author book signings and they look great and happy to be there. Yes MS looks like a 73-year-old grandmother. I hope to step out out the house looking like I am NOT about to wash a car or shine up the windows of the house, thank you very much. Though I can dress casual at work as I work in a semi-industrial setting --I wear an apron to protect my clothes-- ( I must admit I collect Bib type aprons from estate sales and well I have quite a collection, fancy my Rotary Club Wildlife Feast with the name Ben on it LOL !!! Therefore when out and about I try to look dressy casual only because
I am not wearing Wolverine boots a headscarf and an apron with work glove on hand!!! LOL You see, I need to wear an ID badge and prefer shirts with collars as the apron chaffs my neck in a t-shirt---I do put my game face on with a baseball cap sometimes worn backwards!!! MS is a trooper.