As I child I would occasionally use my mother's salad spinner as a UFO/time machine. I would place some of my miniature action figures inside, pull the cord and listen to the clatter as my 'men' were ostensibly transported to another universe. That my mother allowed me to use her salad spinner as a toy speaks to its level of usefulness in our household. My mother rarely used it, except when preparing large salads. Most of the time it sat in a pantry cupboard - unused and unloved. 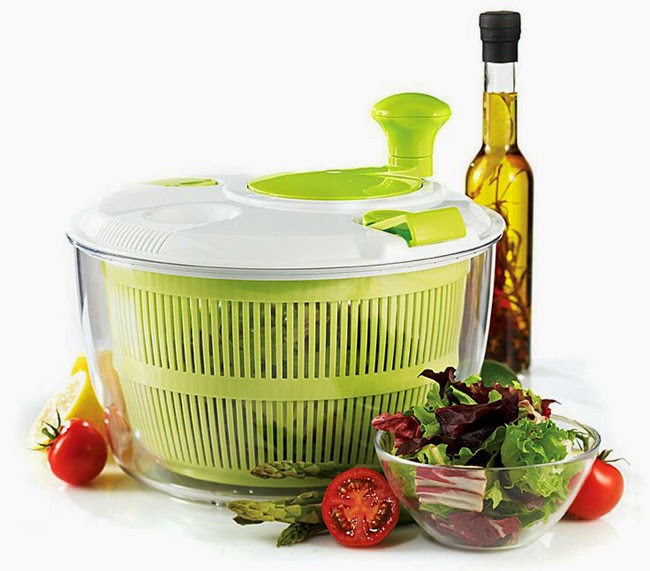 This salad spinner is by Stokes and is the one we use at home.

As an adult, however, I use my salad spinner weekly - for the purpose it was intended! My partner Tomas, who is a vegetarian, frequently eats kale and leafy greens and we often use the salad spinner to clean them. In this second installment of the monthly column Domestic Insight, I'll take a look at the lowly salad spinner, the criticisms levied against it by the housewives of 1970s America and its precarious status as a useful (useless?) kitchen gadget.

EARLY DAYS:
The salad spinner was patented in America in 1973 by French entrepreneur Jean Mantelet, founder of the kitchenware company Moulinex. The device was already patented in France and used centrifugal force to remove water from freshly washed leafy greens. It functioned by placing wet lettuce or vegetables inside a basket that would rotate inside a lidded bowl. Using either a pull cord, a crank handle or a push-pump, the basket could be made to spin at various speeds to remove the water from the vegetables.

Early versions of these 'dry spinners' existed before the 1970s, including a European example from the late 1800s. It was made in Sweden and consisted of a wire basket and a central push-pump that would cause the basket to spin. The problem was that it had to be used inside the walls of a deep sink to prevent water from splashing everywhere.

Below are two images of the patent designs by Jean Mantelet for The Household Drying Machine, submitted in 1971. 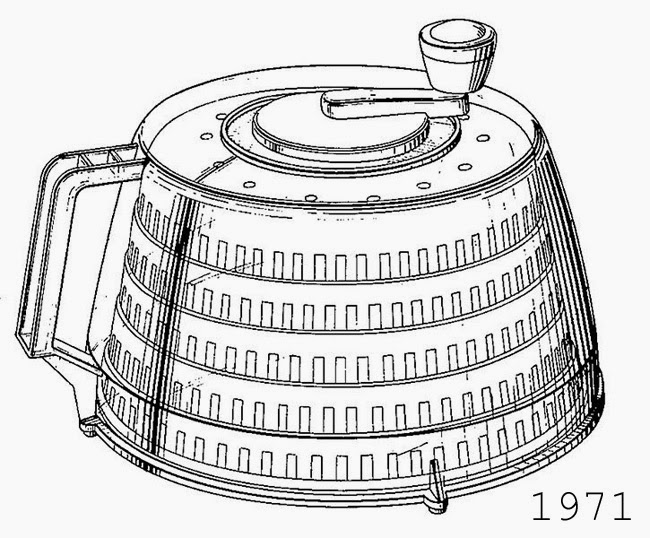 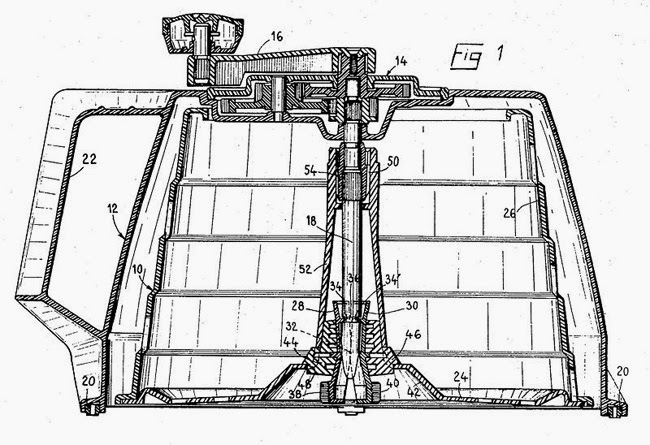 Another French inventor, Gilbert Fouineteau, improved on the design and is credited as the inventor of the modern salad spinner. Fouineteau's design omitted the central tube of Mantelet's design, which housed the spinning gears, and allowed the user to remove the basket from the hull of the device. His 1973 patent is shown below. 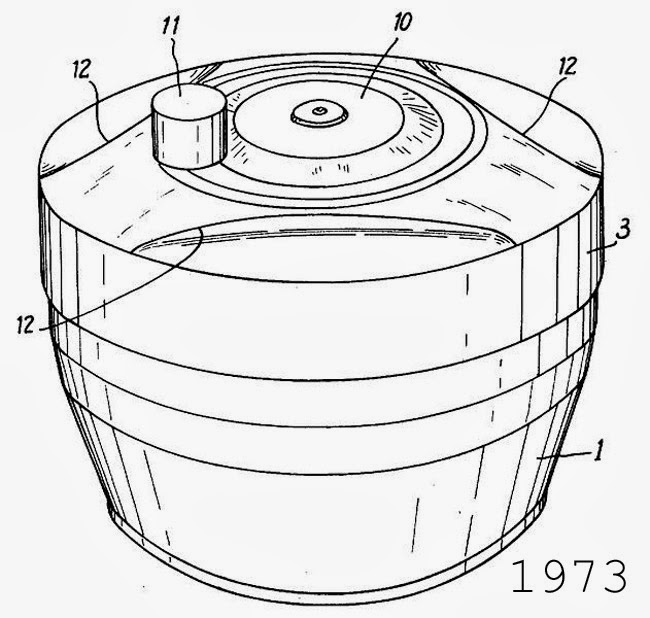 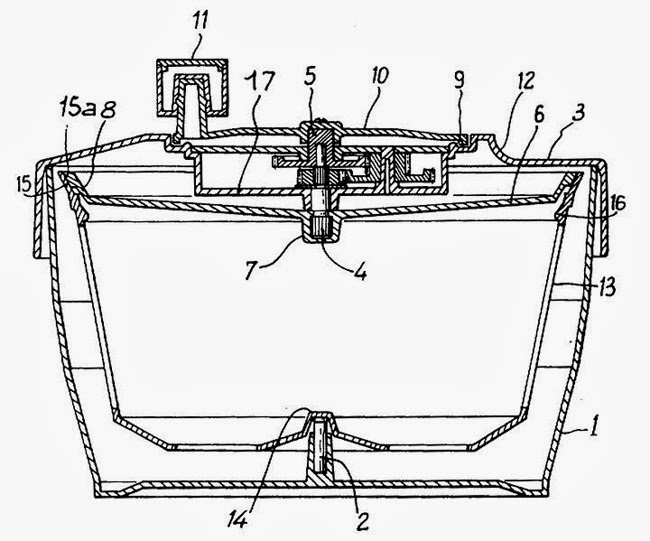 EARLY CONSUMER REACTION:
Americans were not quick to adopt the salad spinner - or The Household Drying Machine, as it was then marketed. Part of the resistence was cultural, since salad was not an incorporated part of the American diet, except as a puny side dish to accompany more robust fare. In fact, it was met with criticism by some editors of women's magazines who derided the device as "another gourmet gadget" and yet another piece of "kitchen junk" that would collect dust at the back of some obscure kitchen cupboard with the electric potato peeler and the cuccumber slicer. It was not until the late 1970s when a new healthy-eating craze swept the nation that the salad spinner became a 'must-have' item for kitchens across America. Suddenly it was okay to serve a salad as a complete course and dozens of salad recipe books sprung up, hailing the salad spinner as an essential kitchen tool. As lettuce and vegetable consumption in the U.S. soared, the salad spinner sold by the millions.

THE SALAD SPINNER TODAY:
A quick survey of friends revealed that most of them do own a salad spinner. I was surprised, however, by how many people did not own one and had no intention of ever buying one. As noted above, I use mine several times a week and I'm glad to have it. What is remarkable is that it has not changed much since the 1970s, which suggests an excellent design. There are several variations on the design, mostly having to do with the mechanism used to spin the inner basket. There is the pump, which some critics say is too harsh on the lettuce leaves because of the extreme force of the spinning action. There is the crank, which is the most popular form, but critics say the handle can break loose. And there is the pull-cord, which is my least favourite design since the cord can become tangled or pulled out of its retracting joint. There is also a heavy-duty electric variety that I think is ridiculous.

MY RECOMMENDATION:
My suggestion would be to buy a salad spinner that is made of sturdy plastic with a secure lid and a sturdy crank. A good salad spinner will generally retail for approximately $30. I like the Stokes model but there are other models by Crate & Barrel, OXO and Progressive that are excellent. I use the outer bowl of my salad spinner to wash my lettuce, filling it with cool water and soaking the leaves while gently agitating them with my hand to remove any excess sand or dirt. I drain the water from the lettuce using the inner basket of the salad spinner and then place it back into the outer bowl to spin it dry. It's an all-in-one lettuce-cleaning extravaganza!

I suppose a salad spinner's usefulness ultimately depends on one's eating habits and the amount of lettuce/leafy greens one washes and consumes. Alternate ways of drying lettuce seem more cumbersome to me: lying lettuce leaves flat on a clean kitchen towel and then placing another clean towel on top to absorb the water, for instance. This process takes up space and time. You are also left with two wet kitchen towels that need to be dried.

No, the salad spinner will always have a place in my kitchen. And each time I use it I do get a childish thrill out of turning that crank and seeing the water whisk away from the lettuce onto the sides of the clear bowl. Simple pleasures!
Posted by ANDREW RITCHIE at 11:49 AM

Beautiful story and info Andrew. I use the brand Tupperware, Salad spinner it is amazing and I always use it. It is called Spin ’N Save® Salad Spinner. I love it

So I have three salad spinners. My first one was a Martha Stewart Everyday Salad Spinner, just a basic one with a rotator on top that does the trick. I also have a Macy's Martha Stewart Collection salad spinner which Progressive makes, with a pull-string, which is also nice. And my third salad spinner is an OXO Good Grips Salad Spinner, which I've seen Martha use on her show. I love them all, and I make a lot of salads so they all get good use. Such a great invention.

I use mine EVERY DAY!!

I'm really enjoying your Domestic Insights column Andrew. I had a good chuckle over your childhood use of the salad spinner. I'm glad today's term is salad spinner and not "The Household Drying Machine." It's a kitchen essential in our home as well.