Martha at the Delicious Food Show in Toronto

If I haven't already stated so before, let me say it again: Martha Stewart is a gorgeous woman! My crush on her was further enhanced today after I had the wonderful good fortune of seeing her in person at the Delicious Food Show in Toronto, where I live.  She was in town to promote her new book Martha Stewart's Cakes as well as her line of Martha Stewart Living Kitchens with the Home Depot, which are now available in Canada. As part of her presentation, Martha made three cakes from her new book: raspberry swirl cheesecake (page 175), cinnamon streusel coffee cake (page 100) and chocolate baked alaska (page 207). 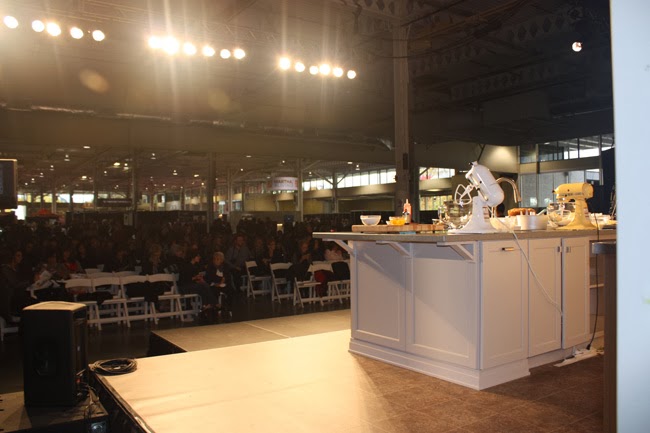 The set was the Ox Hill Kitchen from her Home Depot line and I must tell you it looks extraordinary. I want that enormous kitchen island with the expansive counter space and all that hidden storage! Decorating the set was an entire wall of her ceramic dinnerware and serveware from the Macy's line and her Martha Pantry goods stocked all of the drawers and cabinets. Naturally, there was also a big bowl of eggs that had been laid by her hens at the farm the day before. As always, the format of Martha's delivery was intelligent and informative. She spoke clearly and concisely about every necessary step in making each of the cakes. You realize when watching her why she is considered to be the best of the best. (My favourite Martha lesson du jour: use squeeze bottles instead of pastry bags to decorate cakes, something Martha herself says she is doing more and more often. Noted! It's a good thing!) 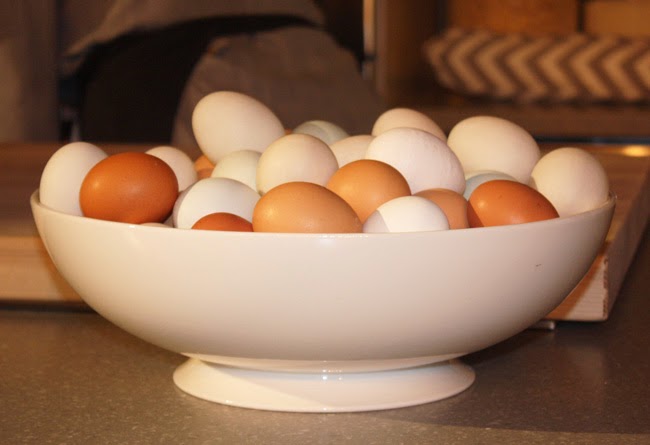 Helping her with the demonstration was the undeniably adorable Thomas Joseph - one of the 'kitchen elves' you used to see on the Martha Stewart Show, busy preparing the ingredients for her cooking segments. He now works much more closely with the editorial team at Martha Stewart Living and also frequently travels with Martha to events such as these to help her prepare. They were great together on stage and had a good rapport. After the cakes were made, Martha took questions from the audience. One question was whether or not Canadians would get to see her shows on air again. Martha revealed that they are working with Netflix to bring a Martha Stewart show archive to viewers, which is very exciting news!

After the demonstration, it was time for the book signing. Martha was signing copies of Cakes only and the rules for the book signing were quite rigid, but understandably so: when you have 600 people to meet and greet in the space of a half hour, that line has to move quickly. I did get a chance to say hello to her and she remembered me, which was really nice. Thankfully, after the signing Martha toured the booths at the food show and we met up again. We started chatting about Toronto and about pumpkin seed oil and about my favourite spot in the city, the Distillery District. It was like talking to a dear friend. Martha introduced me to Patsy Pollack, the design director of the merchandising team at MSLO. She was incredibly sweet to me and stayed on even after Martha had gone on to the next booth to chat some more. Before I left, I went up to her again and said a quick goodbye. She thanked me for coming and told me to say hello to all my readers! Hello, from Martha, everyone! I really wish we could have talked longer.

Spending the day with me at the show was my husband Tomas and a Martha Moments reader from Chicago, Bill Makela, and his partner Larry. Bill and Larry brought me a nice goodie bag containing chocolates made in Chicago and a bundle of Martha Stewart Collection tea towels, which was so very nice of them. It was a really great day - a special day - that I'll remember for quite some time to come. Below are some of my photos from the day, including photos of Martha's presentation, the book signing and a photo of me with Bill, who came to the show from Chicago. The photo of me posing with Martha was taken by Patsy Pollack for TheMarthaBlog.com. Stay tuned for more about the Delicious Food Show next week: meet Chuck Hughes and some of the great vendors we got talking to! 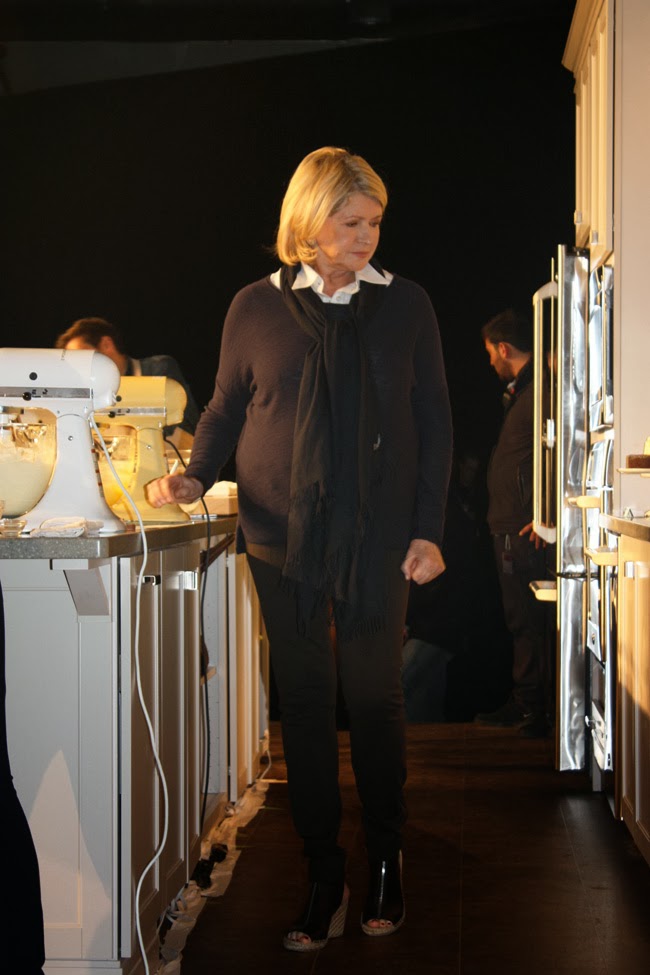 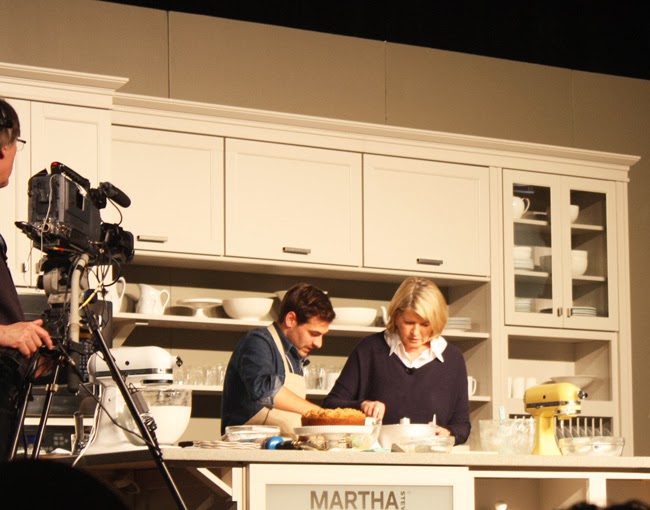 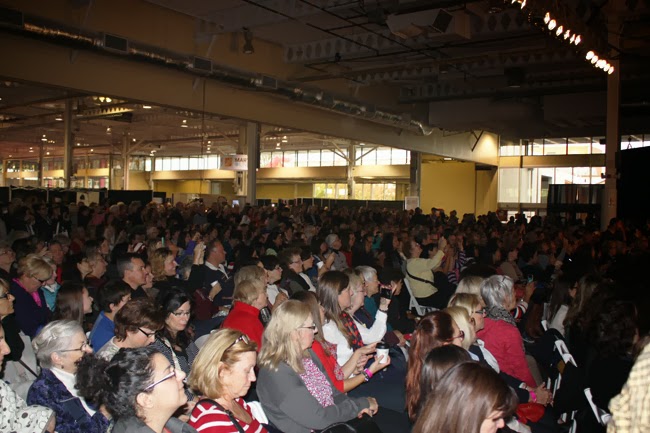 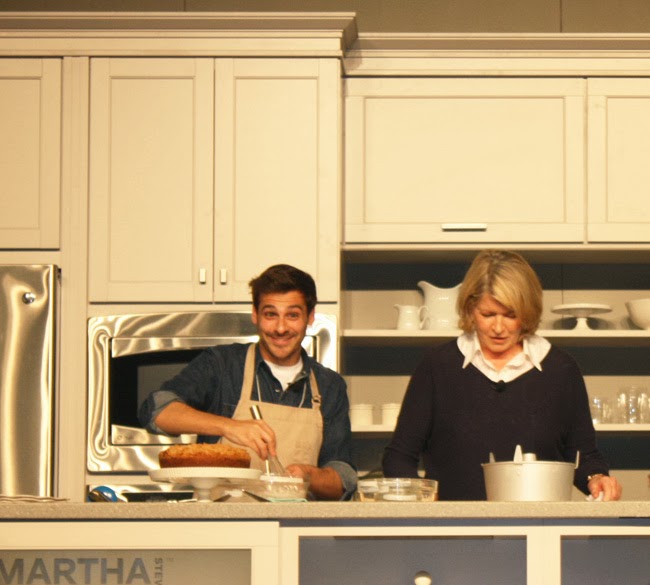 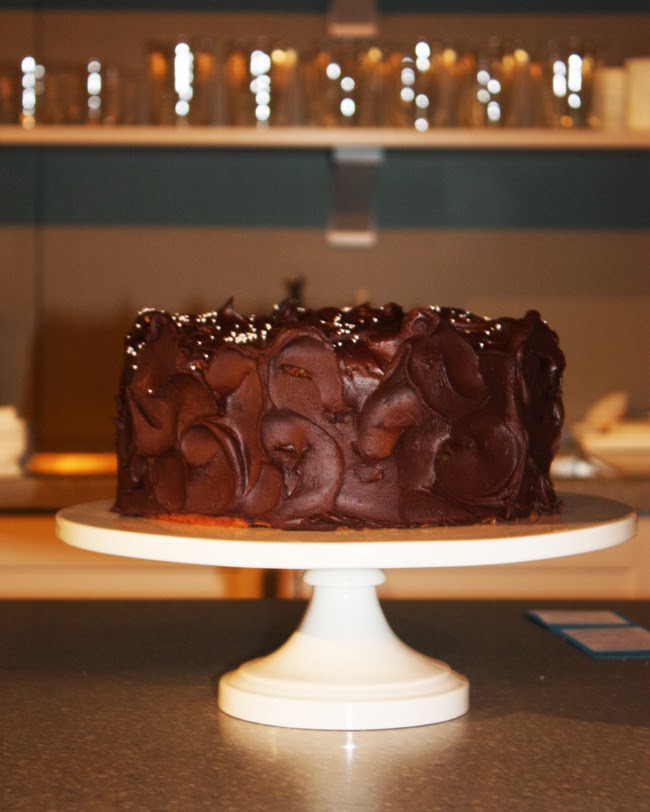 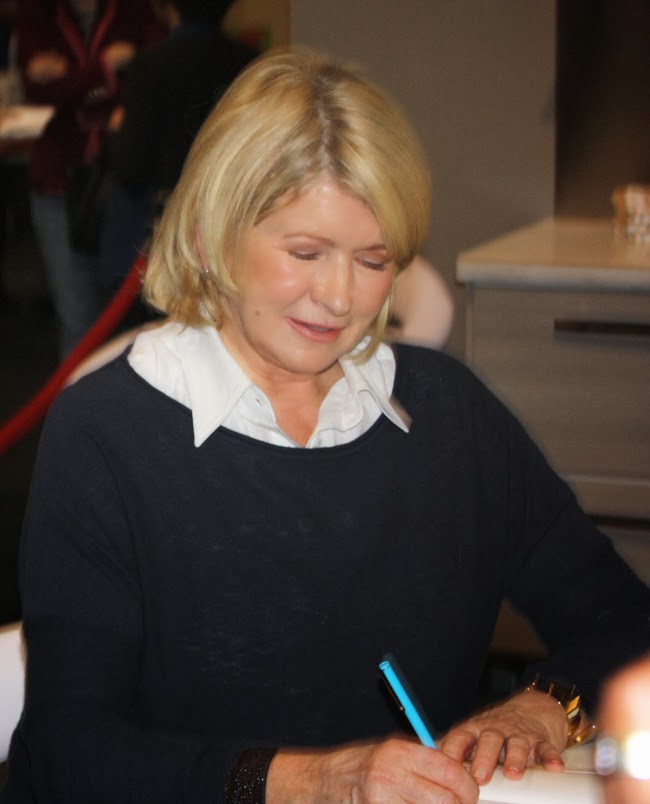 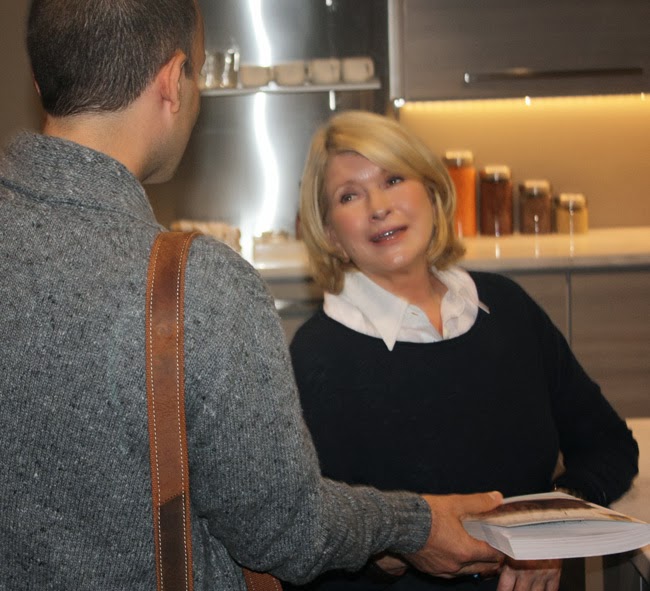 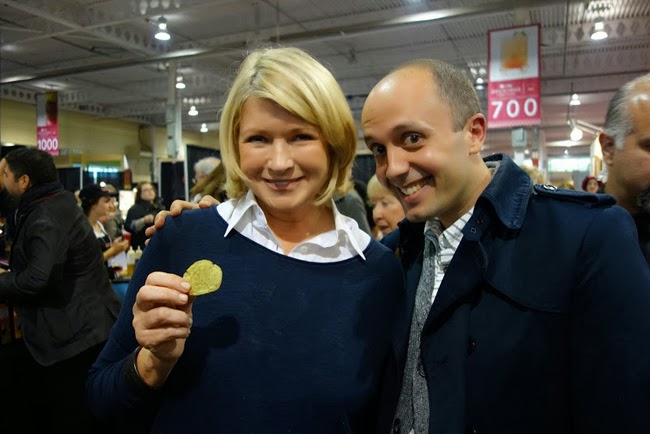 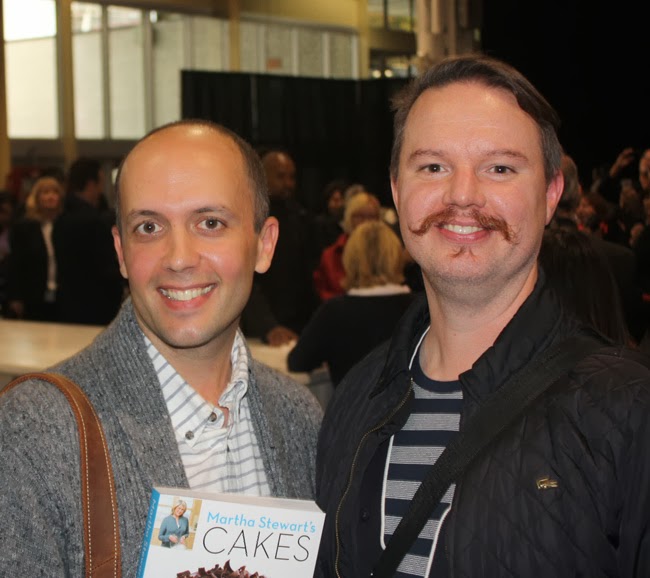 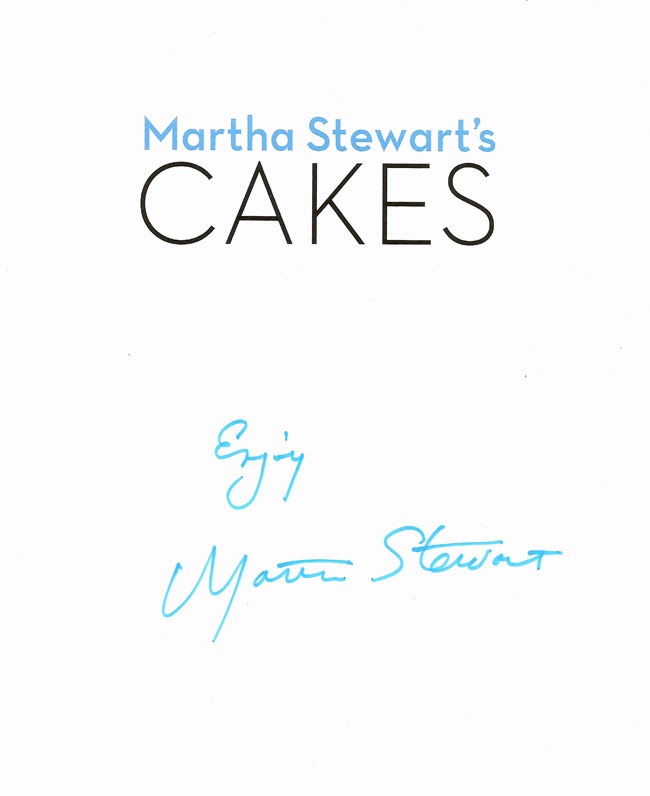 What a wonderful presentation - and you're right, Martha is just beautiful in person!

God, I love her! And you... For sharing this with us. Martha packs a room like no other celebrity and there's a reason for it. She is such a class-act!

PS - How handsome are you!!

So glad she remembered you! Glad you got to see her again, I miss her daily show.

It seems as if you had a wonderful time, Andrew! I do love that kitchen set too, because it has clean lines.

How wonderful of you to share that "Martha Moment" with us!

Wow Andrew what a beautiful day, with Martha a wish of mine to meet her one day. Of course she will remember you Andrew, how could she have forgotten you. I hope that one day I will meet you in person, you are such an amazing person. Wishing you all the best
Have a wonderful weekend

Hey Andrew! say, how many signed Martha items do you have in your collection?

So it goes, Toronto is a wonderful place for anyone to visit. Most do have a crush on Martha and she is fortunate to have you as an admirer. BTW, any info on author event at Harbourfront

Only three signed items, Maya. The Cakes book, the Entertaining book and the card she and I made on her show in 2010. Special items to be sure!

Love your blog! What a fun day! I've waited on line twice for Martha to sign a book and she was beautiful in person. (BTW - this was in the old days at K-Mart and the line was short! I go way back with Martha!).

Netflicks is a rental - which doesn't help us. When will they release all the shows on video? Her shows are gems and I need every darn one on DVD... Help! Also - no one can ever find a video of the first 2 Martha shows on PBS - one thanksgiving and one Christmas. Have you ever seen those?

Bill, yes it was! Thank you so much for everything!

Andrew, your picture with Martha made The Martha Blog post about the Toronto Food Show! What an honor! :)