During the late 1990s and early 2000s Martha Stewart Living released a series of how-to books based on some of the core-content subjects the magazine focused on each month. They were paperback books that were approximately the same size as the magazine: best-of compilations of material from past issues of the magazine with some new content, repurposed into a book format. One of my favourites from this assortment is Arranging Flowers, which was published in 1999. 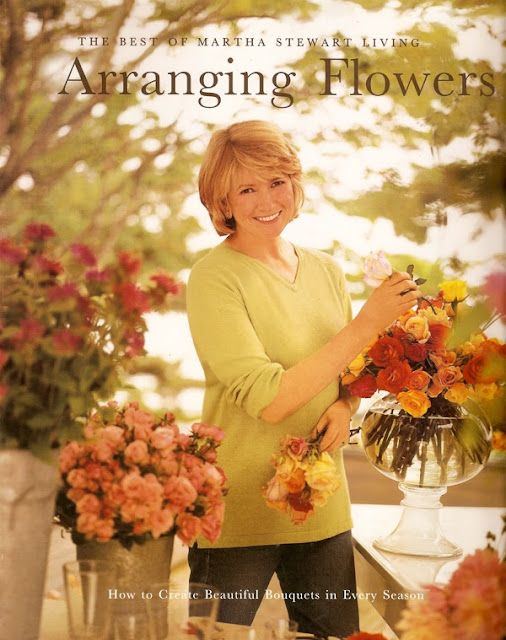 ﻿
For me, the book is a wonderful and simple guide to making attractive arrangements using flowers that grow in the gardens of most North American homes: daffodils, tulips, lilacs, hyacinths, peonies, roses, poppies and lilies among them. More precisely, the book is a great reflection on Martha's personal tastes and an excellent overview of her gardens at Turkey Hill, her former home in Connecticut, and Lily Pond, her home in the Hamptons. The arrangements in the book are primarily made from flowers and branches cut from her gardens; tropical flora is mentioned only briefly.

This is important because the book was released during a time when the "Martha Stewart aesthetic" was in its prime. Readers of Arranging Flowers wanted to learn how to build basic flower arrangements, yes, but they were also seeking to emmulate Martha's style, right down to the kinds of vases she likes to use. (She prefers clear glass vases, by the way, not opaque, because they recede nicely into any decor and let the flowers take center stage.) People who bought the book wanted "Martha Stewart Flower Arrangements" and that's what the book delivers: tasteful, refined arrangements using her favourite flowers, picked from her gardens, arranged in her vases, placed in her rooms, in her houses. Even the text of the book takes a third-person approach to instruction. Many of the sentences begin with "Martha prefers..." or "Martha enjoys..." The tone is curiously biographical in its delivery, which serves to reiterate the importance of the tastemaker herself and, by extention, her ideals.

At around the same time of the book's release, Martha launched her online flower business, called simply Martha's Flowers. Customers could call or order bouquets online and have their flowers delivered to their door. It was a well-timed release date for the book.

In any case, the book is a lovely collection of flower arrangements and they are all extremely beautiful. Most of them were made by Martha but, as the acknowledgements note, she did enlist the help of numerous stylists and editors for assistance. The book offers very helpful, basic tips to flower arranging that any homeowner would enjoy learning about. The advice is practical and timeless and I've returned to it repeatedly for inspiration and ideas. Below are some photographs from the book followed by some practical tips for flower arranging. You can buy the book here. 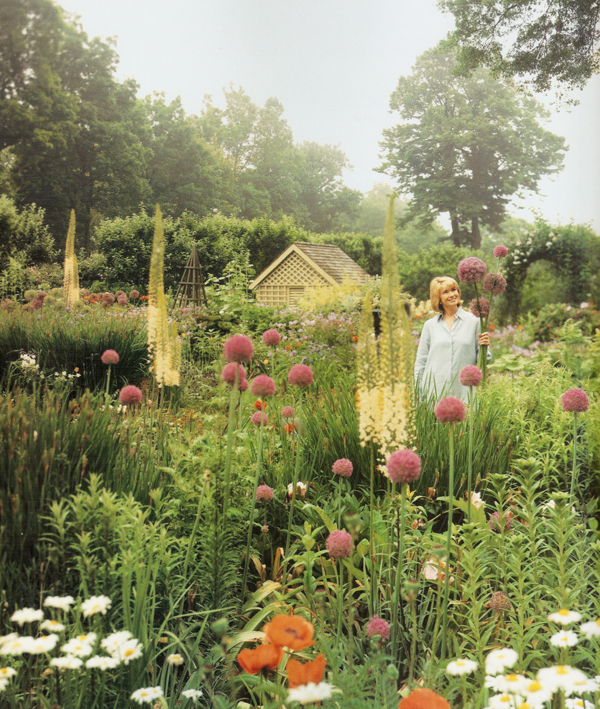 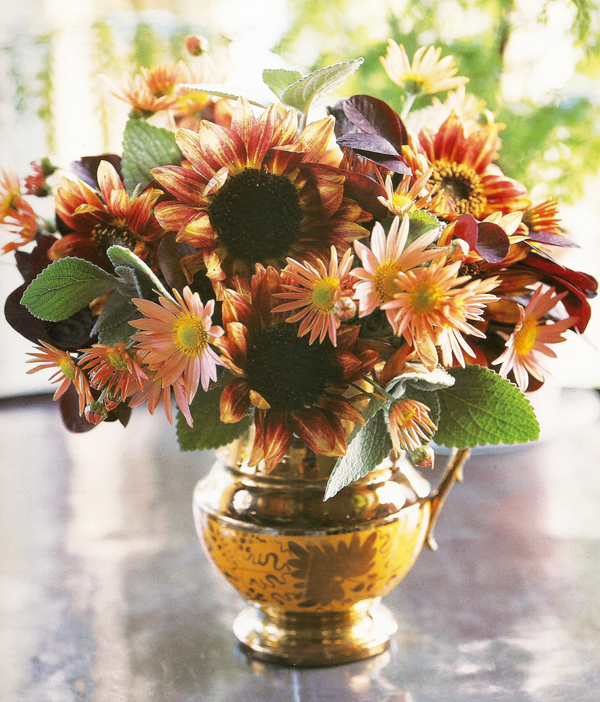 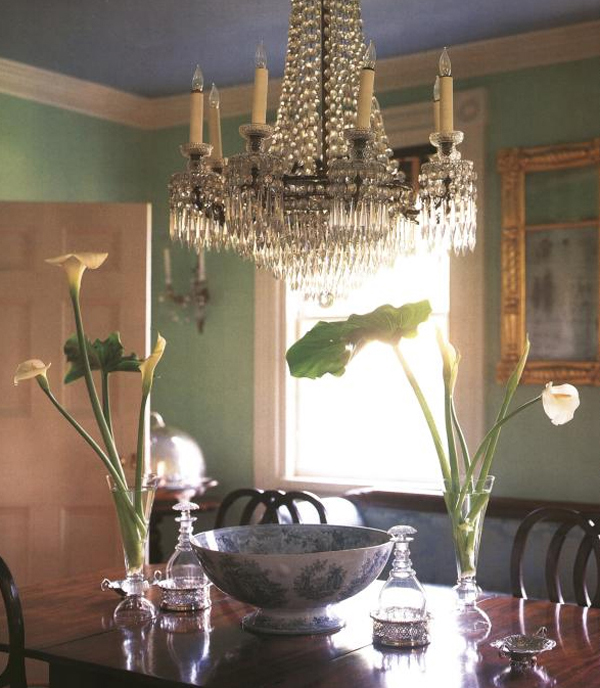 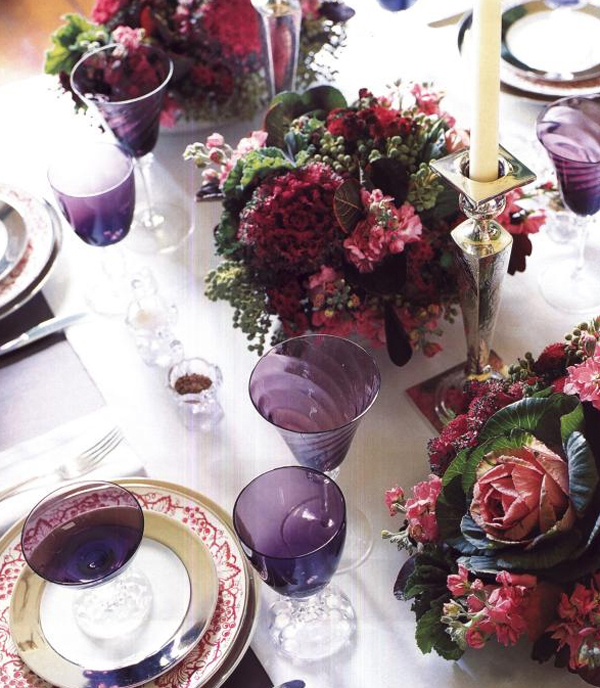 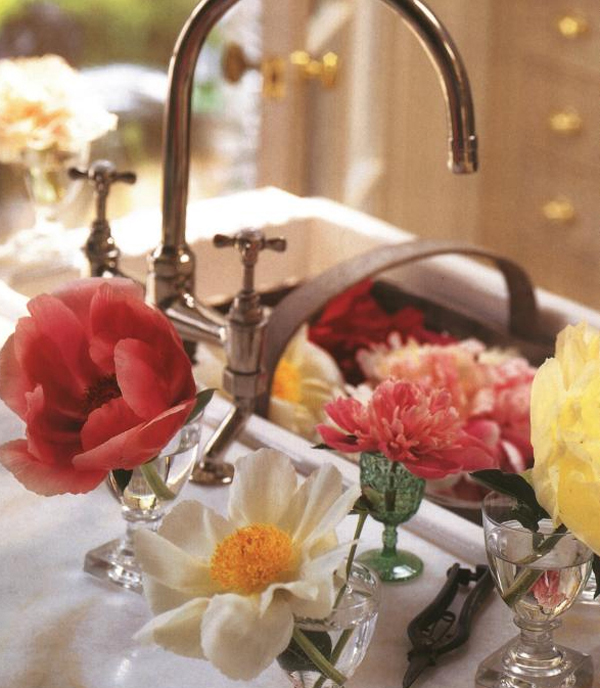 GETTING STARTED
FOR ALL FLOWERS: To properly prepare any kind of stem, keep on hand these essential tools: a sharp knife, scissors or garden shears, pruners, and a hammer - useful for fraying thick, woody stems, especially those of early spring's flowering branches.

FOR ALL GREEN- AND WOODY-STEMMED FLOWERS: Cut stems at a forty-five degree angle. This keeps the stems from sitting flat in the vase and creates a large surface area, so that as much water as possible will be absorbed. Use sharp clippers or shears for woody stems, and sharp scissors or knives for other flowers.

FOR ALL FLOWERS: After cutting the stems, remove any leaves or foliage that would otherwise sit under the water line in the vase. Leaves rot when submerged and will contribute to bacteria and algae in the container, which shorten the life of the blooms.

TREATING STEMS
FOR HOLLOW-STEMMED FLOWERS: AMARYLLIS, DELPHINIUMS, LUPINES, QUEEN ANNE'S LACE: Flowers with hollow stems need to stay full of water. After pouring water into the stem using a watering can, either plug the base of the stem with a cotton ball or use your finger to block the water as you slowly submerge the stem into a vase filled with water. Remove your finger once the stem is under water.

FOR WOODY STEMS: LILACS, DOGWOOD, AZALEAS, CAMELLIAS, FORSYTHIA, CRAB APPLE: Woody-stemmed flowers like branches or flowering trees, should be split vertically about an inch or two up the stem, so more water can be drawn in. If the stem is very thick, smash the bottom few inches with a hammer until it is frayed.

MILKY STEMS: POPPIES, EUPHORBIA, HOLLYHOCKS, ZINNIAS, SUNFLOWERS: Most florists say that if a flower exudes a milky substance from its stem, the stem should be dipped in boiling water for thirty seconds or seared with a lit match to keep the flower from losing its nutrients. The cut stem will instead draw water through the sides of the stem.
﻿
﻿
Posted by ANDREW RITCHIE at 7:01 PM

In anticipation of my daughter's wedding, I've been researching books on flower arranging. This book is by far the best I've found on the subject -- very clear, specific, reliable instructions. This kind of fact-based, researched detail is what made me a fan of Martha way back when -- no one did it as well. And no one does it as well now, including MSL, I fear. I learned so much from this book and from the magazine, but rarely feel so excited about the magazine these days.

Hi Andrew, beautiful book I would love to add it to my Martha Stewart book collection. Beautiful images, I love her old books.
Flying back tomorrow to London for Nour's graduation, so proud and blessed

I agree, Renee. Those older books are gems. Rowaida, enjoy your daughter's graduation! You have every reason to be proud.

I have this book and its a favourite of mine too. Worth tracking down as it is the essence of Martha.

I have to agree.. this is one of the "gems" of classic Martha publications! Thanks for "remembering" and sharing!

Greetings from London!
Thanks Andrew your comment means a lot. Wish you a wonderful weekend