In the 1970s, not long after moving into Turkey Hill, Martha Stewart painted a mural in the front hall of her home, inspired by the primitive, stylized landscapes of nineteenth-century American muralist Rufus Porter. Depicting a pastoral scene of hills and valleys with swaying trees, Martha's mural occupied the wall adjacent to the staircase, ascending to the second floor. Its palette was made up of light terra-cotta tones mixed with deeper browns, punctuated with verdant greens on the branches of the trees. By the end of the 1980s, Martha painted over it, opting for a more streamlined, minimalist look for her front entrance. In 2001, however, Martha decided it was time to resurrect her beloved Porter-inspired mural and this time she enlisted the talents of a brilliant young muralist﻿ named Eric Beare. 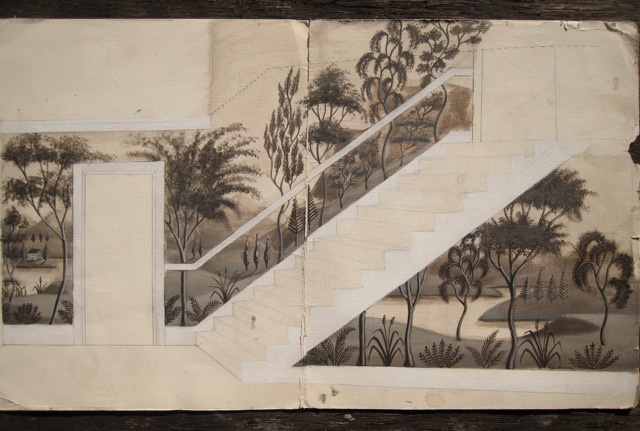 I wanted to learn more about the Turkey Hill mural so I reached out to the artist to find out about the methods and mechanics of its creation. (Above is Eric's original sketch of the full Turkey Hill mural. You can really see the details, including the small house at the far left near the dining room door, which was eventually covered up by Martha's grandfather clock.) Below, Eric explains how the mural came about and describes his process. He also shares advice for those of us who may be considering creating our own mural at home. Please visit Eric's website to see more of his outstanding work.

1. How did Martha come to hear about you and how did the Turkey Hill commission come about?

I did an internship in the crafts department at Martha Stewart Living during my junior year at Rhode Island School of Design. When I moved to NYC upon graduation in 2000, I began working for MSL in a freelance capacity. I also started painting murals around this time for decorators such as Diamond and Baratta. Kevin Sharkey was an ealry proponent of my artwork. I worked on a mural story with him for the September, 2002, decorating issue of Martha Stewart Living magazine. There were to be three murals for the story: stamped leaves, decoupage shells, and early American grisailles. Martha was always a big fan of Rufus Porter colonial era landscape murals and when she saw the sketches I was working on, she decided her stairwell inTurkey Hill would be the perfect location to execute it. 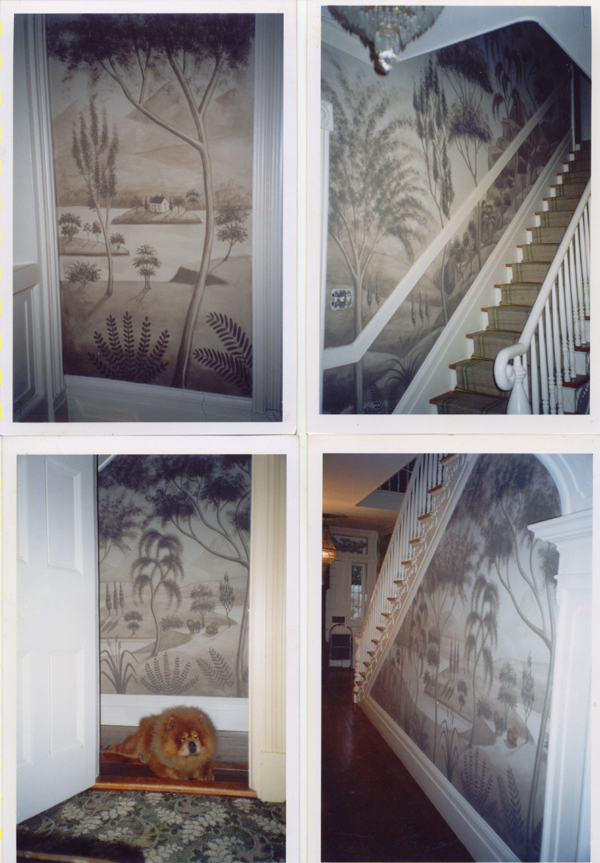 Various photos of the Turkey Hill mural from different angles taken by Eric shortly after its completion.

2. What was your inspiration for the Turkey Hill mural? Did she have any specific requests?

I checked out all the Rufus Porter books I could find from the New York Public Library and photocopied all the landscape murals. She circled all her favorite elements in red ink. She opted to focus on the natural landscape rather than include the colonial villages and farms which were also heavily featured in Porter murals. We did include one small house on an Island but that ended up disappearing behind Martha's big antique grandfather clock. She had also originally asked me to include her two Chow Chows, Empress Woo and Paw Paw. I painted them in the section below the stairwell. I think they lasted about a week before Martha decided they didn't quite look right with the style or genre and I came back and painted over them. I remember she was in Japan when I started painting and called to see how it was coming along. 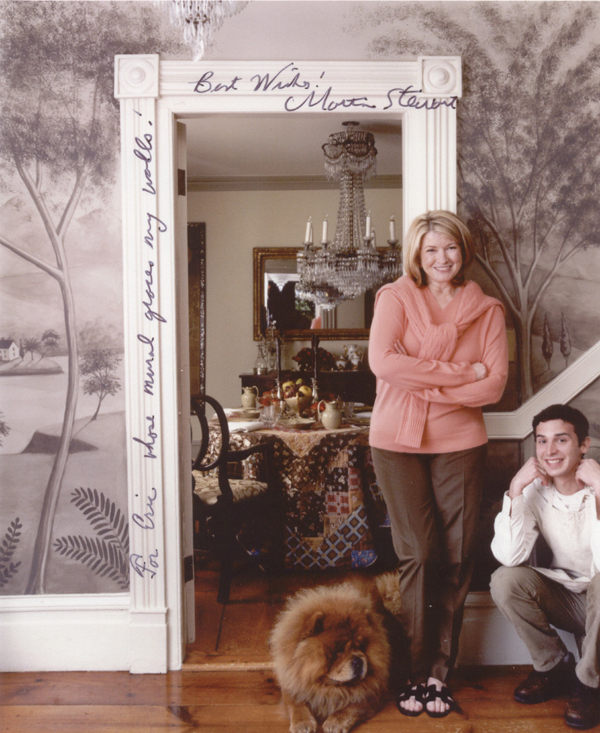 Martha signed this photograph for Eric. This was during the photoshoot for the September, 2002, issue of Martha Stewart Living. The comment reads, "For Eric whose mural graces my walls! Best Wishes! Martha Stewart"
3. What do you generally use as materials? What kinds of paints do you use? What do you reference in terms of inspiration?

Martha picked the color herself from her original "Everyday" paint line. It was called Morel (after the mushroom) and it gave the monochromatic grisailles palette with the slightest of sepia tone, which warmed it nicely. That was standard matte latex wall paint. I diluted it with water and added a glaze medium to make it transparent. I used natural sponges to create the foliage, which was a technique borrowed from the early American painters.

4. What advice do you have for someone who may be considering a mural for their home?
Choose a theme and palette you'll enjoy living with. It could be the backdrop for your life for a while. Sometimes choosing a limited palette that compliments your decor is a safe way to go. You don't necessarily want it competing with the rest of your decor. Spend some time gathering inspiration from decorating books and magazines, blogs, etc. If you are planning on painting a mural yourself, make an elevation of the wall/ walls you plan on painting on graph paper. An elevation is a flat, vertical drawing of the wall with any other architectural elements drawn in: doors, windows, stairs, etc. Make sure to measure things accurately and write the dimensions on the elevation. This helps to make sure things will get translated properly from your sketch to the wall. You can make photocopies of this elevation and try out different compositions while sketching. 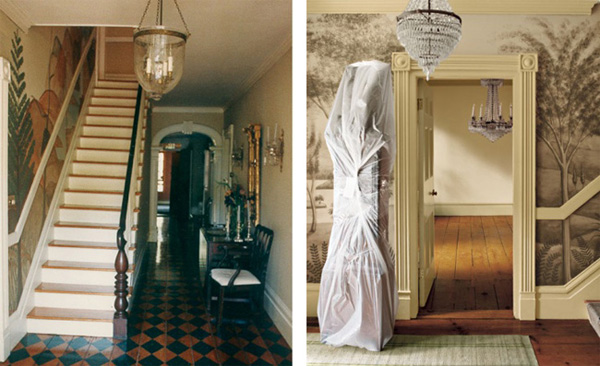 On the left is a photograph of the original mural at Turkey Hill, painted by Martha. On the right is Eric's mural, photographed during Martha's move to Bedford.


5. What (and who) are some of your inspirations and influences? 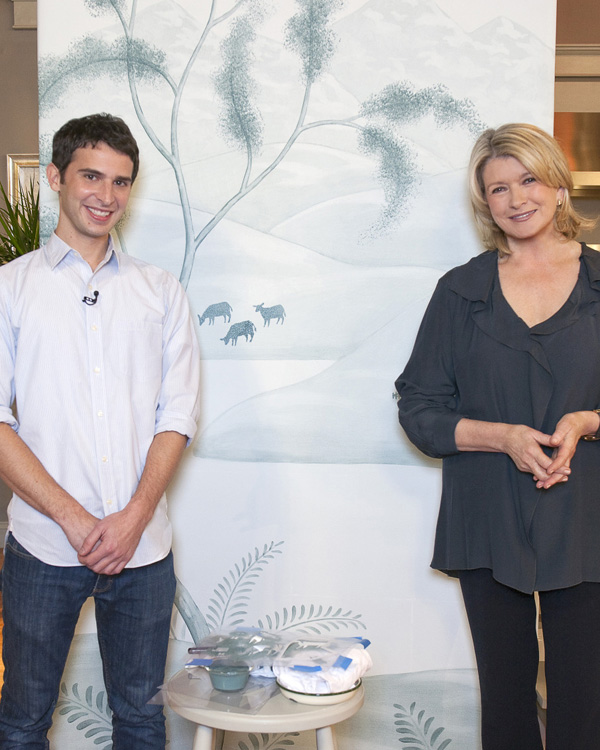 Eric was a guest on the Martha Stewart Show and demonstrated his techniques. 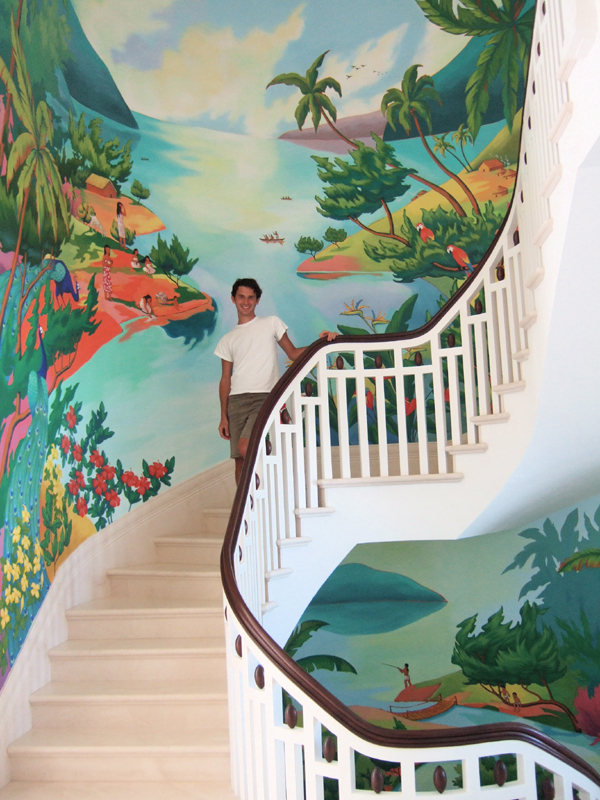 Here is Eric posing next to one of his very colourful murals in a grand home. See more of his work here.
﻿
Posted by ANDREW RITCHIE at 8:38 AM

Beautiful post and great interview and advise from Eric. I checked his website, Wow! his work is amazing, so talented. Love it
Happy Friday and a great weekend

Great Turkey Hill Information!
Thanks for finding out and posting more on this house.

Enjoyed this post very much. Turkey Hill is still my favorite of her homes. Sad when she let it go.

Wow. This indeed was an excellent post. He was an unpaid intern? Was he an unpaid intern when he created this mural? It is beautiful. This young man is so talented. Andrew I suppose this will be all over the blogs --I gave up watching her show so sorry I missed his demo. To me it was hit or miss.

I'm not sure whether Eric was paid for his internship or not. But the experience he gained was worth its weight in gold!