When I first saw Lucinda Scala Quinn ensconced in one of my favourite Toronto landmarks - the quaint and charming Cookbook Store - I felt immediately at ease. I'm a fairly anxious person and have always struggled a bit with shyness and mild introversion, which is both a blessing and a curse, so it was with a little case of nerves that I opened the door and entered this little nest of a place to meet someone I've always deeply admired. Lucinda's voice, her smile, her sense of humour and her gold sneakers instantly made me realize that I was in the presence of a wonderful person.
She is in the midst of a national book tour (international, I guess, since Toronto was happily on her list of stops) to promote her new book Mad Hungry Cravings, the follow-up volume and companion piece to her very excellent book Mad Hungry: Feeding Men and Boys. I hurriedly picked up two copies (believe me, they were going fast) and waited my turn to say hello. I introduced myself as the creator of Martha Moments and I was pleasantly surprised to hear that she knew about the blog. She told me that it is well-known at MSLO and thanked me for the support over the years. 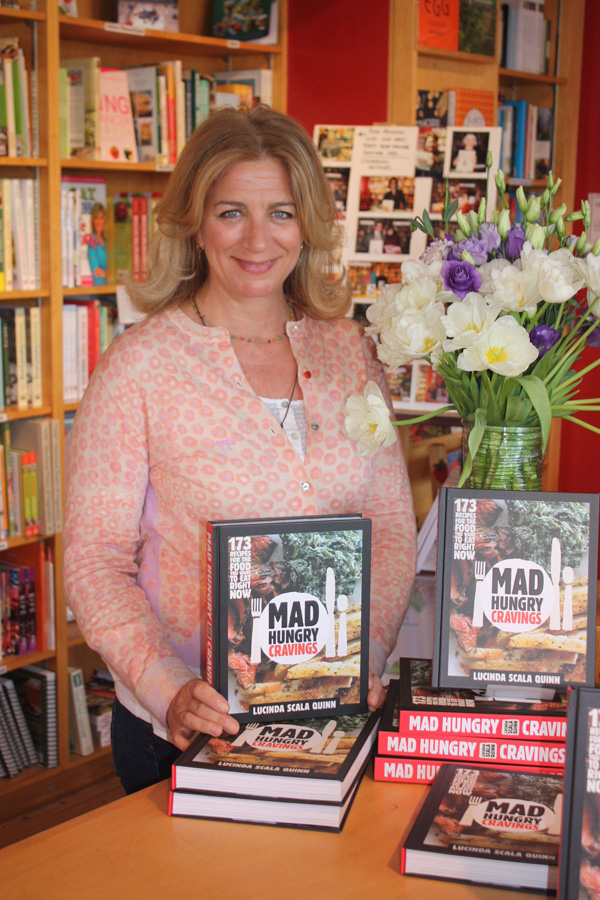 The book itself is a treasure trove of philosophies, ideas and strategies for eating, as well as cooking. What I love about it most is its very practical and realistic approach. Lucinda, more than anyone I know, understands that people lead busy lives. She is the executive editorial director of food and entertaining for Martha Stewart Living, an author, a television host, columnist, radio host and producer! She's got a lot on her metaphorical plate! And yet, she cooks for three grown boys (four if you include her husband) every week, stressing the value of local, fresh and seasonal ingredients as much as the time-saving measures that will get the meal on the table faster.
Cravings is all about replacing our urge to pick up a take-out menu with the urge to make what you crave right in the comfort of your own kitchen, saving money and ensuring that we connect with the food we put into our bodies as well as connecting to the people we will be feeding it to. Lucinda told me she loves to go out and explore new restaurants and she was very happy and touched that I gave her a list of my favourite Toronto restaurants...as well as some cookies from a local bakery and a recipe journal for scribbling down ideas. Her aim with this book, however, is to teach you how to make your favourite take-out or street foods at home. If you must go out, avoid chain restaurants in favour of local cuisine and order things you've never tried: indulge your curiosity as well as your cravings.
In speaking with Lucinda, you really do get a sense of her passion. I urge you to pick up a copy of her book and let your cravings guide you through its pages. Below are some photos of my meeting with Lucinda. Lucinda is also doing a television interview tomorrow on Global Morning, a local Toronto morning show to promote the book. Following the photos is a piece by Brian Utz who also met Lucinda on her book tour and was lucky enough to take one of her cooking classes! Brian is a regular reader and contributor to Martha Moments and he was the one who first informed me of Lucinda's visit to Toronto. I'm so glad he did! When she and I parted, Lucinda thanked me for stopping by and told me she would say hi to "everyone back at the Mother Ship!" Love her! 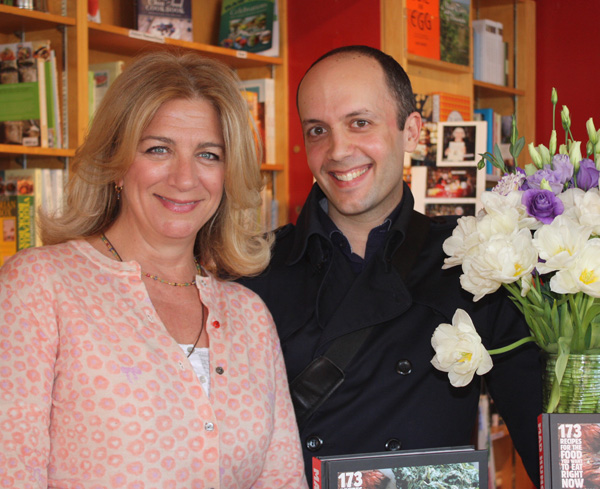 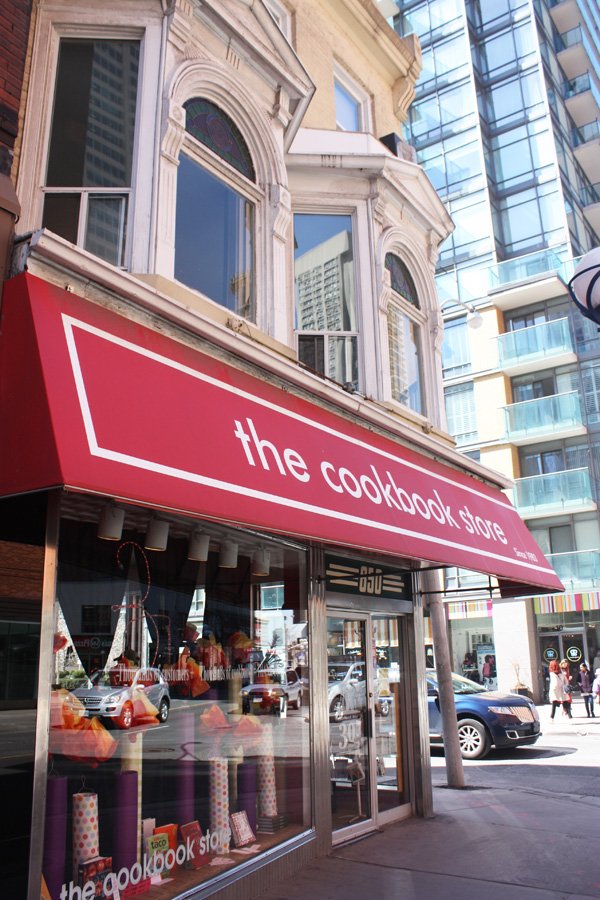 The Cookbook store is located in Toronto's historic Yorkville neighbourhood on Yonge Street, which is actually North America's longest street at nearly 1,200 miles long, stretching from Lake Ontario all the way north to Lake Simcoe, right through the core of downtown Toronto.  The store opened in 1983 and has been a Toronto landmark ever since, drawing celebrity chefs and patrons from all corners of the globe. The key to its success? Offering the very best cookbooks from all over the world, including tomes you won't find anywhere else. It's where I always buy my Martha Stewart cookbooks. Visit their website.
Brian Utz And His Mom Cook Brunch With Lucinda
Martha Moments reader Brian Utz shares his thoughts about Lucinda, her cookbooks and his cooking class with her last week at LivingSocial in Washington D.C.
She’s the genius behind bringing back the family meal, and she’s made quite a dent in the way we Americans eat. Was it all her doing? No. Was she an outlet for the 20, 30, 40 somethings who were pressed for cash and tired of going out? Yes! And to them she’s not just an outlet, she’s a Godsend!
Mad Hungry is a book I’ve been cooking from since it hit shelves. Lucinda’s stories and recipes in Martha Stewart Living have made many appearances at our own dinner table. I can actually remember the first time I attempted an apple pie at Thanksgiving, (November of 2006) and I used her Apple Raspberry Pie recipe from the magazine. I remember when her oldest son Calder graduated from college in Vermont. They had an eco-friendly graduation party at Shelburne Farms and entertained with local foods from the Vermont Region. And of course, I remember the beautiful video she narrated (and the accompanying article she wrote) on salmon fishing in the Copper River in Alaska for the premiere ‘Boundless Beauty’ digital issue of Martha Stewart Living.
Now that the show is over, I keep up with Lucinda’s travels, her family, and her job through her blog, social media, and the magazine. When I heard that “Cravings” was coming out, I was absolutely thrilled! The first thing I thought was ‘200 more recipes I can cook!’, and then I thought, ‘BOOK TOUR!!’ 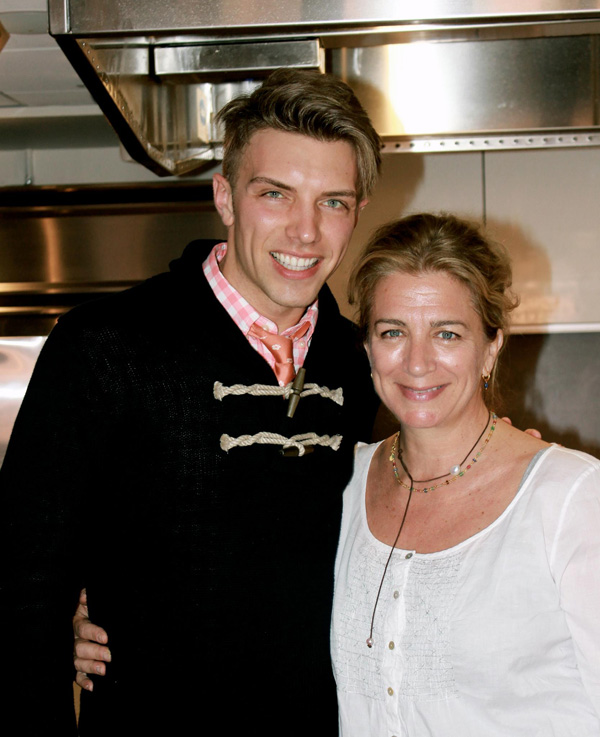 Lucinda, is in the middle of a whirlwind book tour taking place all across the country. This past weekend I had the pleasure of meeting her and taking one of her classes at the LivingSocial offices in Washington D.C. She taught three classes, two on Saturday and one on Sunday. I attended the Sunday brunch class. We made 4 out of the 173 recipes featured in Cravings.
Lucinda was extremely sweet and incredibly genuine. It’s amazing that someone who is literally such a powerhouse, and a food icon is so down to Earth. She walked through the class and introduced herself to everyone individually. When she came to me, I said, “I’m Brian.” She said, “Oh, MorbidHomemaker!” (my instagram and twitter panhandle)
We started out with drinking a delicious black tea and citrus pitcher. We then went right into making the modern ambrosia salad. The staff at LivingSocial did a wonderful job doing the prep work. It felt almost as if you were on a TV set. The ambrosia salad was delicious. Traditionally made with cool whip and marshmallow, this modern version boasted ingredients like Greek yogurt, vanilla, honey, kiwi, pineapple, mandarin oranges, and sweetened coconut. Then, we started the double wrapped sausage. There were 4 sausages and 4 pieces of bacon. She taught us how to roll them, and how to make them ‘Sizzle’ by preheating our ovens and adding the pans to the oven while they preheat. We finished it up with blueberry buttermilk pancakes. Afterwards, we enjoyed our brunch, and it was well worth the effort. The recipes were absolutely delicious! After brunch, Lucinda came to each of us and hand-signed our copies of Mad Hungry Cravings.
And she signed it all with one sentence; To Brian, Cook What You Crave. Lucinda
Lucinda was very interactive with everyone there. She was also very humorous, pointing out that Cravings was voted one of the ‘Top 5 Cookbooks for Stoners’ according to a San Francisco newspaper, and Wiz Khalifa instagram'd a picture of his desk, with a copy of the first ‘Mad Hungry’ book on it. We also joked around about how we both brought the same bag (The black carryall tote from Martha Stewart Home Office line at Staples.) I shared with her my appreciation for people like her, Martha, and Sarah Carey who teach everyday people like myself the basics of home cooking. I also put a plug in about how much I adored the digital ‘Boundless Beauty’ issue, and how saddened I was about the folding of Everyday Food and Whole Living. I had my picture taken with her and said, this might end up on Martha Moments, and she exclaimed, “Oh, Yes!!” 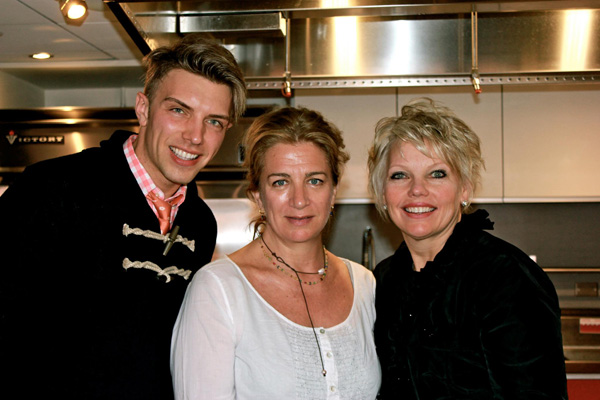 She did mention that there’s a third book in the works! The one thing I do love about Lucinda and the Mad Hungry Team; It’s about quality. They’re not worried about signing onto a reality TV show, or pushing book deals for dollars to roll in. It’s not her style. She takes her time with these books and it’s evident when you pick up the book and not only do you get a recipe. You get a story. You get beautiful, candid photography, and helpful tips and tricks. As she says, “Recipes are just formulas,” but I’m telling you Mad Hungry Cravings, like its predecessor, is a character and a game changer in the cookbook world.
In the May issue of Martha Stewart Living, make sure you check out the essay on the back page. It was written by Lucinda. The first essay she’s ever had to write about something other than food. It’s a very touching essay, about the ailing health of her mother and how she reignited that creative spark within her mother through an impromptu trip to Europe. It was touching. As relevant as the essay was to Lucinda’s situation and her personal life, I couldn’t help but think… This woman through one way or another has ignited a creative spark within each of us. To rethink the way we eat, to save the scraps for something else, to make a meal out of pantry staples, and to stretch tonight’s dinner into tomorrow’s lunch. She’s an extremely accomplished individual, and yet she gives you the impression that she’s just the mom next door. (A very stylish mom next door I might add, with her gold metallic sneakers!)
This woman is passionate about food and the way we buy, prepare, and enjoy food. Her outlook is infectious, and her personality is instantly contagious. It’s a dream come true when you get to meet and cook with one of your idols. I am so happy I was able to have my mom along to experience the day with me!
Food is family. Food brings everyone together. Food is Lucinda Scala Quinn and her incredible new book, ‘Mad Hungry Cravings.’ 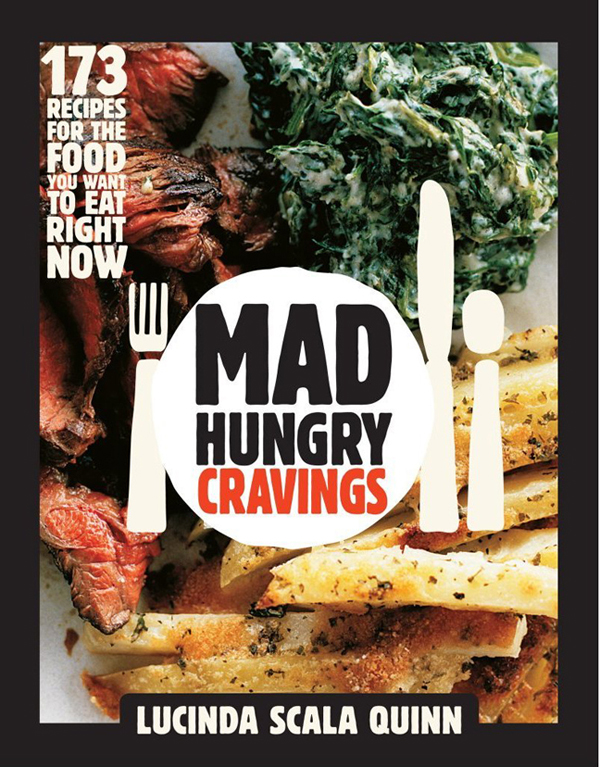 Mad Hungry Cravings is the latest cookbook by Lucinda Scala Quinn, filled with recipes and strategies for making all those delicious things you just can't resist! Click here to order your copy!

Posted by ANDREW RITCHIE at 4:41 PM

Wonderful photos! I'm so happy you and Brian were able to meet Lucinda. I had the good fortune to meet her during her first "Mad Hungry" book tour and we've touched base several times since. I adore her and her spurtles! xo

She regretted not bringing her spurtle with her to Toronto, Kenn! I overheard her telling this to another fan... :-)

Lucinda is the best! Saw her in West Hollywood! Great book. Great blog.

beautiful beautiful book, with lots of kitchen wisdom. I already made the healthy chicken burger and it turned out awesome. i love how Lucinda is down to earth (like sarah carey, only different!), and the thing i love best about this book is how we readers get little tiny peeks into her family life - running after the boys, trying to get everyone to eat well and on time, even when they're away in college or whatnot. Great post, Andrew and Brian!