As I write this, my friend David Bondarchuck is speaking with Martha Stewart. He is feeling the energy and buzz of excitement as he awaits his moment on set with her for a live taping of her show. For David, today is a dream come true.

David has made so many of his dreams of come true, which touches me so deeply, because he was once homeless. At the age of 16, David found himself living on the streets of Denver, Colorado. He spent countless hours in the library poring over lifestyle and decorating books where he discovered his true passion: food and entertaining. Martha's books were especially inspiring to him. It wasn't easy, but he was determined to make something of himself.

Today, David is the proprietor of his own catering company called Scratch Catering. His most recent accomplishment is helping to decorate the White House for Christmas, one of only a handful of volunteers chosen out of of thousands of applicants from around the country. This achievement led to local press and an interview on NPR, which was heard by one of Martha's producers. When David mentioned in the interview how much of a role model Martha has been to him over the years and how inspired he has been by her career and her ventures in business, the producer wasted no time in contacting him to be a guest on Martha's show.

David's appearance on Martha is today. He will be making bottle-brush Christmas trees.
Be sure to watch!

David was one of the first readers of Martha Moments, which is how I met him. He has been a great supporter of my blog and I always love hearing from him. He told me all about his adventures at the White House recently. I really wanted to share his story. Below, David explains his duties as lead decorator for the Red Room at the White House and he shared some of his personal photos. 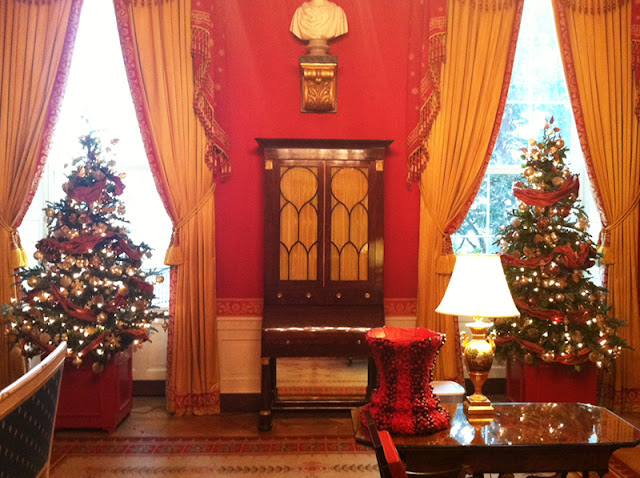 I have been trying to be a volunteer decorator for the past 3 years. Since I was 16 and saw Martha at the White House with then first lady Hillary Clinton I have always wanted to go. So when I started catering I started sending in pictures of my creations, tablescapes, and events to the White House for consideration and review.

As I had said it's been 3 years and I have never heard or received a response until September of this year, when I was finally accepted. I was so excited!
I flew out to DC from Denver on our Thanksgiving Day. That evening there was a White House decorator briefing at a DC hotel. As it turns out there were only a 100 or so people chosen out of the whole country and all whom applied, to help create the first lady’s vision of “Give, Share, Shine” this year. At the briefing I was assigned Lead decorator of the Red Room in the White House. I was also paired with 5 other volunteers to help me transform the space.
On that following Friday and Saturday all of us volunteers were taken to a warehouse 40 minutes outside of downtown DC. This warehouse is the Presidential Record Warehouse. Everything in it was/ is used in the white house at some point. Imagine a building the size of a Costco, but inside was home depot meets hobby lobby. There were chandeliers hanging above in storage, old ones, americana and colonial styles. They are switched out of rooms at the white house by the White House electricians as needed for cleaning or decor. 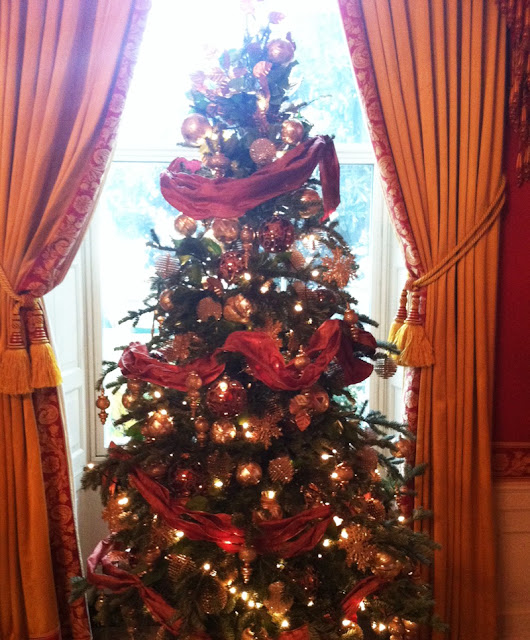 In this warehouse we handmade ornaments and decorations for the White House display for different rooms. Ironically a lot of the ides for ornaments and decor were right from the pages of Martha Stewart Living. We made “Pine-Cone Frames” using photos of service men and women. we made styrofoam balls wrapped in fabric strips. I mean, we were all like elves for two full days! Then Saturday night we loaded the trucks. Every room was marked and inventoried by box and then loaded in room order.
On Sunday it was our first day in the White House. That morning we got a White House tour, and then there was a mini press conference for the cameras. 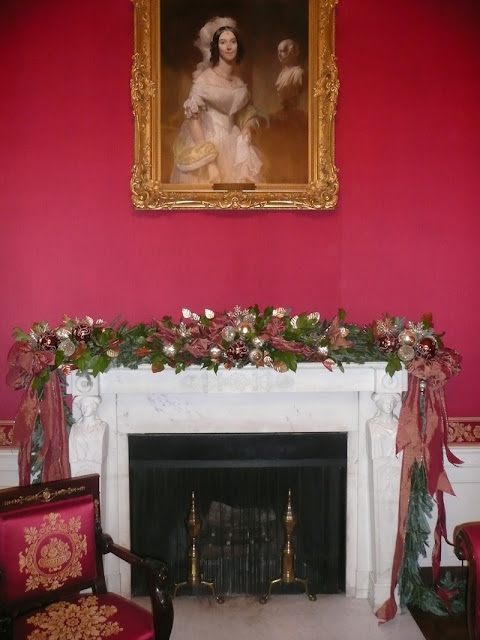 Then it was on to work! Again I was assigned Lead decorator in the red room. The red room walls are all red of course but they're not painted, or wall papered. They are in fact covered by stretched silk canvass. It was so beautiful! I had heard that the year previous the designer had used red everything in the red room and it was overkill. So this year I choose to use gold tones. I used 5 varieties of gold and amber browns. I also used gold sprayed leaves and salal (lemon leaves) in the trees and built them up like floral arrangements. I also did the same on the mantel.

There were two full trees in the red room and of course the mantel to decorate. My team was amazing and we were done with the red room by the next morning. Then with nothing to do I helped out in other rooms until I was asked to do the green room as well. The other designer had been re-assigned and they loved what i did in the red room so they asked if i would also work on the green room. I completed the mantel in that room using boxwood and glittered pinecones, clear glass balls, clusters of small various shades of greens mini glass balls and eucalyptus twigs. 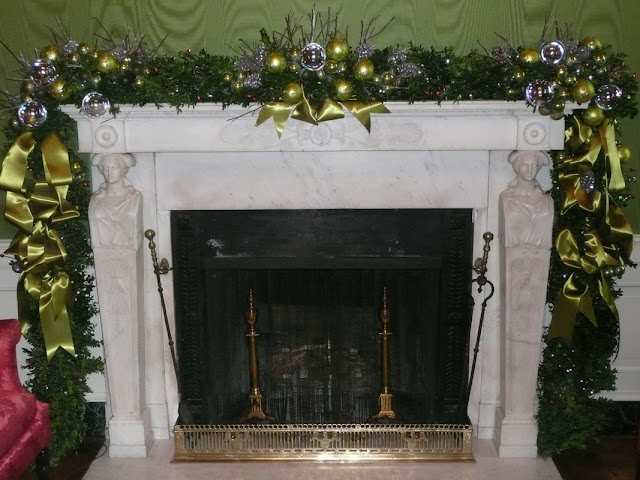 In all I was in the White House for 4 whole days and worked on almost everything! It was amazing fun. I even met a woman working downstairs who had once been one of Martha's gardeners from Turkey Hill!
The entire experience was so amazing at the White House. But I must say that I am just as excited to be headed to see Martha as i was to go to the White House. It's all just a dream come true.
Posted by ANDREW RITCHIE at 8:55 AM

David was great on the show today -- appreciative and articulate and enthusiastic. The special message from Michelle Obama clearly touched him, too. Congratulations, David, on your wonderful work at the White House and your successful segment on Martha today!

What a wonderful achievement to set your goals high and be realising them. Congratulations David! The rooms look beautiful and so pretty. Happy holidays to you.

I was very moved, and very happy to see the segment with David today.. What a genuinely appreciative man.
David, if you're listening..er.. reading.. you truly are an inspiration for so many. Thank you for being you!

David was great on the show today! He really kept his cool meeting his idol. Such an inspiration to keep climbing toward your goals.

This is the one and only! I first of all, want to say thank you to Andrew for posting such a lovely posting of my experience and background. It truly means a lot to me. I visit this blog daily, it was a bit weird to see myself in a posting.I think its the nicest article that I’ve had posted about myself and this experience.
But even more surprising was all of your wonderful comments posted here. Thank You, Thank you, Thank you! So much for all the words of encouragement, and praise. Its without a doubt touching!

May the spirit of this season bring you and yours all the blessings and wishes you have ever hoped for, even if it is 14 years later, and always, just like me!

What lovely creations. The thought these artifacts are collecting dust in a warehouse-- shocking. Is there any archival notes attached to the artifacts these are historical artifacts valuable historical can I say that often enough magical historical I am dumfounded 40 minutes away in maryand Virginia who knows a secret location volunteers sworn to secrecy are you wait, I have said too much already -- brb there's a knock at the door

David is really great and so inspiring, what he did in the white house is beautiful. I watched his segment online and loved it.
Best Wishes