Touted as "not your mother's self-help book," the new book by Alexis Stewart and Jennifer Koppelman-Hutt may just leave you speechless - a state Alexis and Jennifer have rarely found themselves in. The book is a spinoff of their former radio show, Whatever with Alexis and Jennifer, which aired on Sirius satellite, and their television show of the same name, which aired last year on the Hallmark channel. While Alexis and Jennifer have gone their separate ways, the book is filled with anecdotes about how the two girls grew up, their advice on food, clothing and life in general. It has been called a "tell-all" by various media who have salivated over Alexis' detailed accounts of growing up with Martha: "If I did something wrong, I would have to throw it away and start all over again," she writes. "I grew up with a glue gun pointed at my head." On Halloween, Alexis says, there was rarely anything to celebrate: "There was no costume. There was no anything. We would turn off all the lights and pretend we weren't home." Martha insists the book is all in good fun (it was dedicated to her, after all) and she calls  the book "very funny." It is out today. 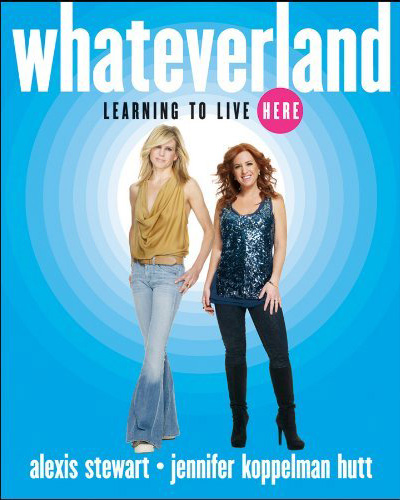 Posted by ANDREW RITCHIE at 7:36 AM

I just can't work it out. Is the stuff about Martha true? Is it just over-embellishing the details? Who knows. I don't think I care.

I love most things 'Martha' but I do wonder how much Martha actually does. And that is fine with me. I like that she has pasta with Alexis and Kevin on Christmas Day rather than the turkey and all the trimmings. It makes me think that although I aim to do as much as I can and perfect things, its alright to sometimes turn the lights off and pretend I'm not there!

Hi Andrew! I noticed you are back posting on this amazing blog. Welcome back! I enjoy reading your posts and was sad when you decided to stop posting. Best of luck and success.
What do you think of Alexis's new book?

I think there are many Marthas. Martha the brand does everything in a big, beautiful way. Martha the person often likes things very simple. Martha the mother - well, who knows!? :-)

Actually almost all of the things that Alexis writes in the book comes directly from what she says on herand Jennifer Hutts show tv show"Whatever, Martha".Nothing new.........

While Martha has proclaimed that Alexis' on air behavior is her "schtick" - I personally find it annoying.. I'm sure growing up "Martha's daughter" has it's plus and minus moments - but you'd think she would be grateful on some level.. she never appears to be. (short of making her appearances in court during the dark days..)

This book just feeds the media frenzy of finding reasons to attack Martha (we all know how they love to target her for most anything). It's just unfortunate.

Alexis has a great eye for design. I'd much rather see her put her talent to good use - rather than something that is "all in good fun." "Whatever" as a whole needs to be put to rest.

What happened with the end of Alexis and Jennifer's working relationship?? I guess I missed out, since I don't listen to the radio show.

Alexis ended their friendship, Carrie. They're no longer on speaking terms.

Jennifer was on Howard Stern yesterday and some more details came out. Alexis pretty much froze her out for the last year. Jennifer seems apprehensive about making a a joint appearance with Alexis on the Stern show, although she said she would, because she's concerned about what Alexis may say or reveal.

I do find Alexis the more compelling and interesting of the of the two and I love her attitude towards her mother. It's definitely a family member's point of view. My mother can aggravate me and I can't imagine if she was considered the doyenne of domesticity how that would feel. Alexis is fiercely loyal to her mother. She's tough. Funny. Sometimes caustic, but that's interesting radio. I wish she had a venue. She and Kevin were fantastic together when he co-hosted in lieu of Jennifer for two days.

One thing I want to know is what joint appearances Jennifer and Alexis will make together. Jennifer mentioned there would be some events, but was mum. She didn't say she was doing Stern in advance, which I found odd. I imagine they will both have to do the Martha show. Does anyone know?

Does anyone know if Alexis has a blog anymore, separate from her old Sirius site?

Alexis is apparently working on building a blog, but has been stalling.

on wrapping her own presents.. were these presents used a props for a photo shoot.. thus the cost worked into the editorial budget and the wrapping warranted a credit line in the book and a padding of the staff to produce the book magazine ( and check for A. S. ) or commercial. rework reuse reward--- ended their friendship.. the working relationship radio show was a job ... no longer on speaking terms gosh

What would Alexis do if she didn't have a famous, rich mother? I often wonder that. She's not interesting, she's only marginally talented, and she looks like a drag queen. Just saying.

Content on the internet --quotes from the "book" sound hauntingly familiar as if the A.S. quotes were from the commentary heard from the show whatever martha honestly, the lerderhosen comment has been heard before ---I have seen you tube clips from thr promotional videos. Once again a job done once has been rehashed into something else someone will pay for again.

Just watched the interview on the Today Show with Alexis and Jennifer. I thought Jennifer was the more normal, down to earth person; friendly, approachable. Alexis was defensive, mean, and has a huge chip on her shoulder. Alexis never answered the interview questions fully either. No respect for her mother...exposing her mom's bathroom habits. TMI.

Alexis claims she's only close to her mother. Yikes! If this is the way you treat your own mother, someone you enjoy being with, I wonder how she reacts to people she hates. Oh, that's right Alexis won't speak to you thereby punishing the offender. She's delusional.

I'm betting there are folks who would go out of their way not to have contact with her too!

Based on what I heard on the Today Show, there is no way I would spend $1 on this book or pick up at the library. It would be a waste of my time. And my time is more precious than Alexis' shallow book.

By the way, besides Alexis' now defunct radio gig, what does she do to make a living? Is she living off the stock she sold from her mom's business enterprises?

The book I'd read by Martha Stewart would be entitled, "Alexis, the Ingrate."