Which Cover for October?

The editors at Martha Stewart Living are having a hard time choosing the cover of the October issue. On Facebook, Martha has opened the choice to a public vote and so far it's a pretty even split. The first cover was photographed by Jonathan Lovekin and the second by Cedric Angeles. Both are captivating, but which one do you like better? (Update: It seems the cover with the tarts made it to subscribers but watch for both covers on the newsstands. Which one do you like better?) 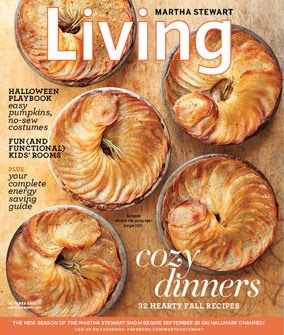 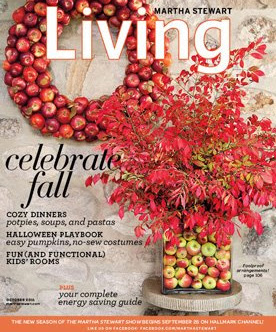 I prefer the cozy dinners cover because the other is beautiful, but I don't think I'll be making apple arrangements. :)

I like the apple cover. I was thinking just the other day "if" the cover would have pumpkins somewhere.
I won't share which cover makes it to subscribers... :-)

I love the colors of the Apple arrangements. It pops out a bit more than the other.

I'm a fan of the apple cover. Lots of inspiration, even if you don't do it all. :)

Well the cozy dinner cover arrived at my house last week and I have seen it on the newsstands too, so I think they decided on that one. Maybe it's on the iPad edition.

Cat's out of the bag... cozy dinner cover it is for subscribers, newsstand and iPad edition.

I really wanted the apple cover to win. It is more vibrant. I might try and recreate the cover scene at home. It does look wonderful.

I definitely am a bigger fan of the "Celebrate Fall" cover because it "Pops" visually. The other cover, is too quiet and monochromatic. To me, Fall means vibrant color!

October is in my view open season for apple pie here in the UK. Cozy Dinners is my preference they look good enough to eat just missing devonshire cream!