I am a huge fan of eggnog - not eggnog flavoring, nor eggnog ice-cream, nor eggnog coffee (Starbucks has a version) - but pure, honest-to-goodness eggnog. Even better if it's homemade! Going through my recipe box last night, I came across a folded magazine tear sheet that intrigued me. (I do sometimes harm my magazines, but it's not something I make a habit of.) The page was from an issue of Martha Stewart Living. When I unfolded it, I was reminded immediately of why I had torn it out in earnest in the first place. It was a recipe for Martha's spiced chocolate eggnog, which blends two kinds of chocolates with vanilla, cinnamon and cayenne for a surprising and delicious alternative to the traditional holiday standby. Below is the recipe to try this season. 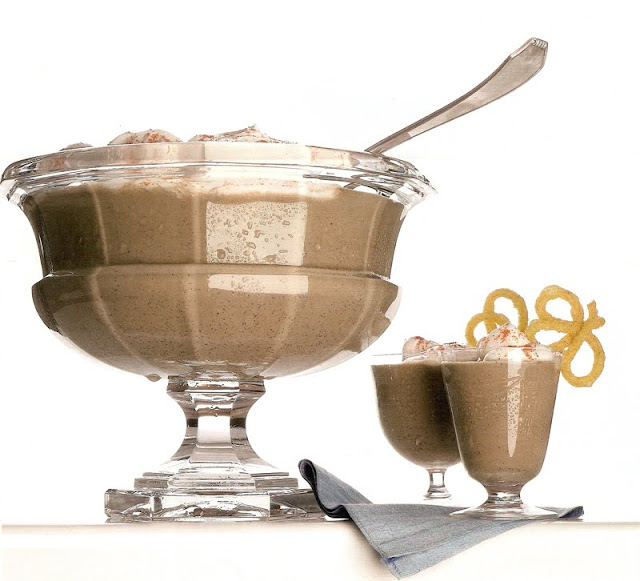 1. Heat 2 quarts of milk, the sugar, salt, vanilla seeds and pod, and cinnamon sticks in a large pot over medium heat, stirring until sugar dissolves and the mixture is heated through. Remove from heat. Let stand for 30 minutes.

Posted by ANDREW RITCHIE at 4:15 PM

Andrew
This is the best recipe I have for Eggnog, Martha's Traditional Recipe from Entertaining can be a bit strong, but this is a amazing! A couple years ago I made this for a Christmas Party, and hosted over 75 guests here at my home.
Warning: This recipe yields a huge batch!
In fact I made this recipe twice, one of the worst kitchen disasters of my life happened when I attempted this the first time...
Below is the menu I prepared and served to 75 guests, so as you can imagine I went sleepless for nearly 3 days, at the point where you add the melted chocolate to the eggnog base I decided to use a rubber scrapper to make sure i utilized all the melted chocolate, however, due to being tired and well it was 4 something in the Am, I know so Martha! I accidentally dropped the bowl into the eggnog base and hence a huge splash of eggnog went everywhere!
Ceiling, Check!
Floor, Check!
Me, Check!
you get the point! The mess was unbelievable!
So after a crying fit, on the kitchen floor curled up in a fetal position I began to clean and clean and clean, by 7am you would have never known that old faithful wen off right here in this very kitchen!

My novela has gone on long enough! Happy Holidays! I hope you got my card and CD!

Wow, David! You certainly were ambitious! (Haven't received your card yet, but how nice of you to send me one!) Happy Holidays to you and yours! And CHEERS! :-)