When I first saw the photographs of Paulette Tavormina, I was gobsmacked. I could simply not believe that these lush, painterly still-life compositions were photos, not the masterpieces of Dutch and Spanish painters of the 1700's. As fine-art photography goes, Tavormina, who is represented by the Robert Klein Gallery in Boston, occupies a rarified place of artistic excellence, elevating the medium to a level of gorgeous execution not seen elsewhere.

She is responsible for those sumptuous images in the Sotheby's catalog (a contributor since 2007) that have bidders drooling over priceless works of art and collectible sculptures. She has also worked as a food stylist for several Hollywood productions, including The Perfect Storm, Nixon and The Phantom. Currently, she is helping some friends of ours (Dr. Brent Ridge and Josh Kilmer-Purcell of Beekman 1802 fame) photograph heirloom vegetables from their garden for their upcoming cookbook; Brent and Josh tell me the new cookbook will be their main winter project. How beautiful it will be to see such amazing photographic work in their first book!

In getting to know Paulette, I found her to be as generous and inquisitive as I imagined such an artist to be. Below are some examples of her incredible work, courtesy of the Robert Klein Gallery. To read more about her, including a great essay about her work by Wayne Andersen, and see more examples of her work, please visit her website. 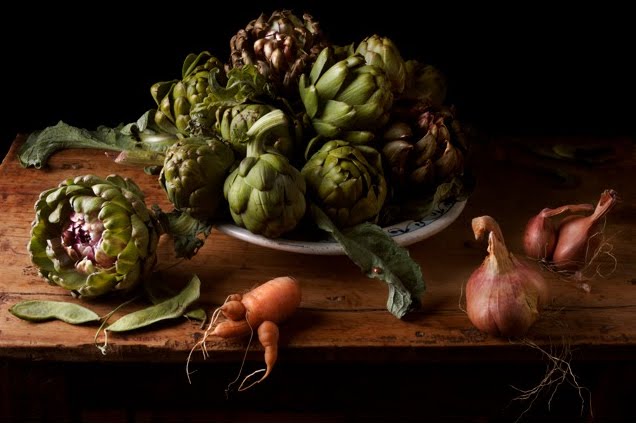 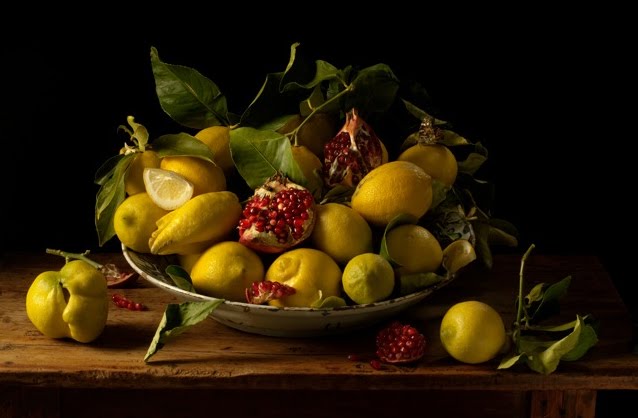 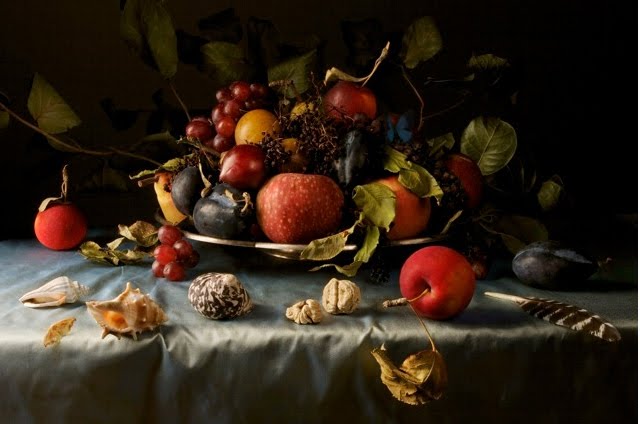 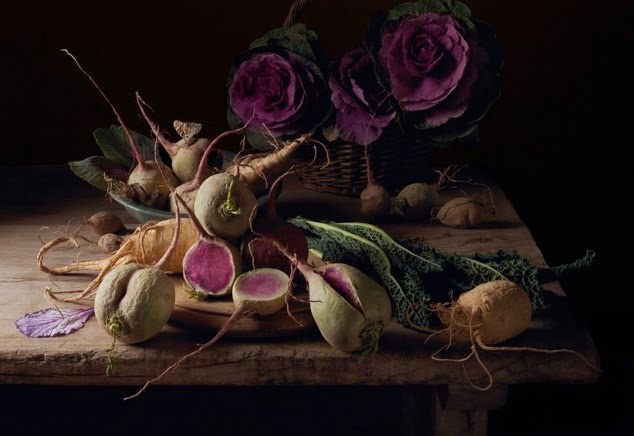 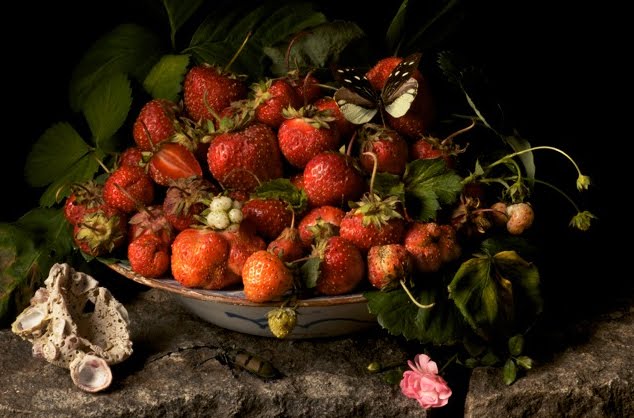 This particular still-life of strawberries has an interesting story attached to it. Paulette explains:

For Strawberries, I spent day and night of the 4th of July weekend just setting it up. As soon as I had cut the leaves from the stems, they wilted and died, so I had to cut off lots of leaves as replacements. Because it was dead and as dry as a mummy, I had to steam the large insect to soften it so with tweezers I could separate the legs and the antennae that were stuck together. When I placed the lifelike insect in the composition, the strawberry above it came crashing down and broke off one of the antennae ... (that would have happened in nature, too, I suppose).
Insects often play a role in Paulette's compositions.

Walking the streets of New York City, I look for dead bugs to put in my pictures. Once I found a praying mantis that was intact, and the butterfly that’s in Peonies. I found a huge queen bumblebee that must have bumbled into a passing car, and on another day, I saw a grasshopper where for blocks around there was no grass to hop over. I was about to pick it up when I saw that it was plastic. On a recent trip to Nantucket, I found a horseshoe crab and other dead crabs. I put them in a box and took them back with me to Manhattan. I had to soak them in my bathtub with Clorox to get rid of the awful smell.

To illustrate just how painterly her compositions are, have a look at her photograph of oysters (below) and the Dutch still-life painting below it. 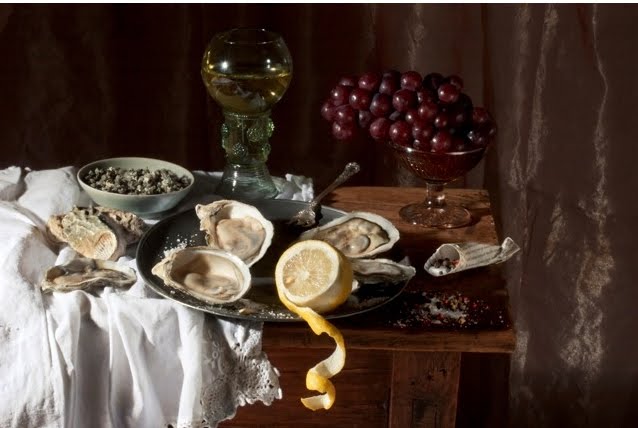 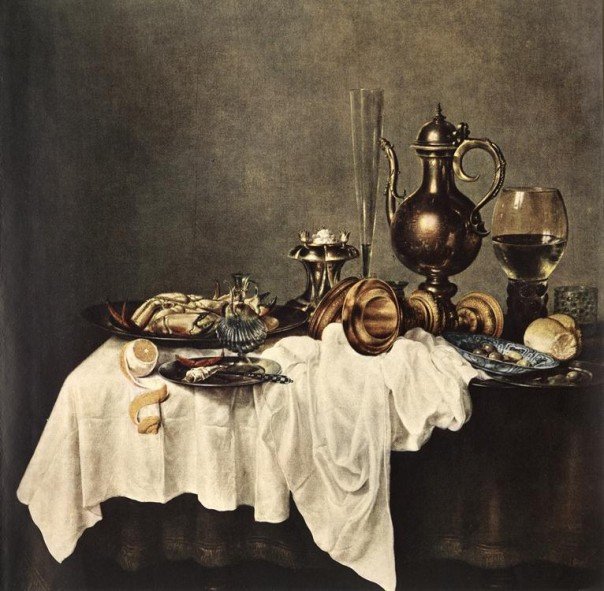 we are so honored to be working with paulette for the new cookbook. as a gardener, there is nothing more interesting or flattering than seeing what she captures from the produce i bring in to her each week. we literally can't wait to see what she's done with it. the attention to detail is painstaking. we can't wait to share it with everyone...our only fear is that no one will pay any attention to the recipes!

Paulette has captured the essence of here and long ago. Her photographs play tricks on your brain. You know it's a photograph, but it looks like a 17th century oil painting. They are exquisite.

The honor is mine to be working with Josh and Brent (who are as adorable as could be). It is always so entertaining to see what Josh will bring me from the farm..freshly harvested that day. Their vegetables are so beautifully characteristic and inspiring that I cannot bear to break down the set after I am finished with them. My hats off to them!

What a totally delicious group of photographs!! Or should I say, "photopaintings." Thank you for your generous blog.

I was raised on art and art history. When I was 15, my mother took me to Europe, beginning with Holland. Where did we go but to all the museums including the Rijks Museum and Mauritshuis Royal Picture Gallery in Den Hague. These photographs are amazing! I second anonymous' vote of "delicious!"

I just met Paulette in Paris last week where she won the Gran Prix of the II International Culinary Photography Festival. Great personality, unbelievable talent. As a fellow photographer I hope to keep in touch with her.